Accessibility links
Armed 'Good Guys' And The Realities Of Facing A Gunman As the nation ponders how to stop the next mass shooting, the gun rights movement offers one controversial answer: armed civilians. In 2005, one such private citizen tried to stop a mass shooting at a mall in Washington state — and paid a heavy price. 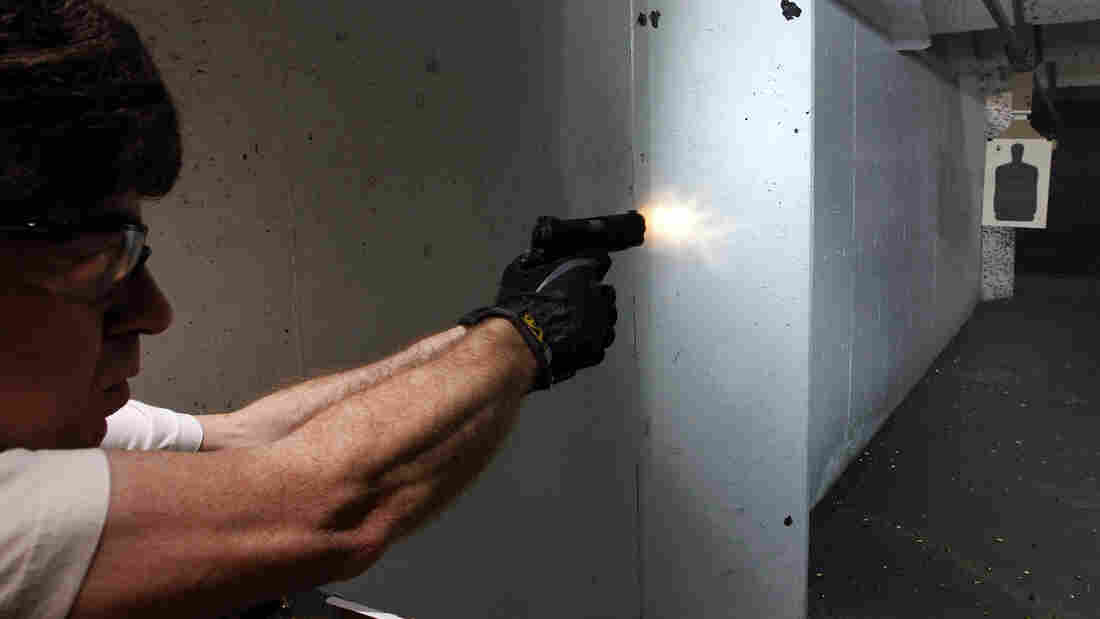 The NRA and some concealed-carry activists say the best defense against gun violence is armed "good guys." Here, a man fires his pistol at an indoor range in Aurora, Colo., last summer. Alex Brandon/AP hide caption 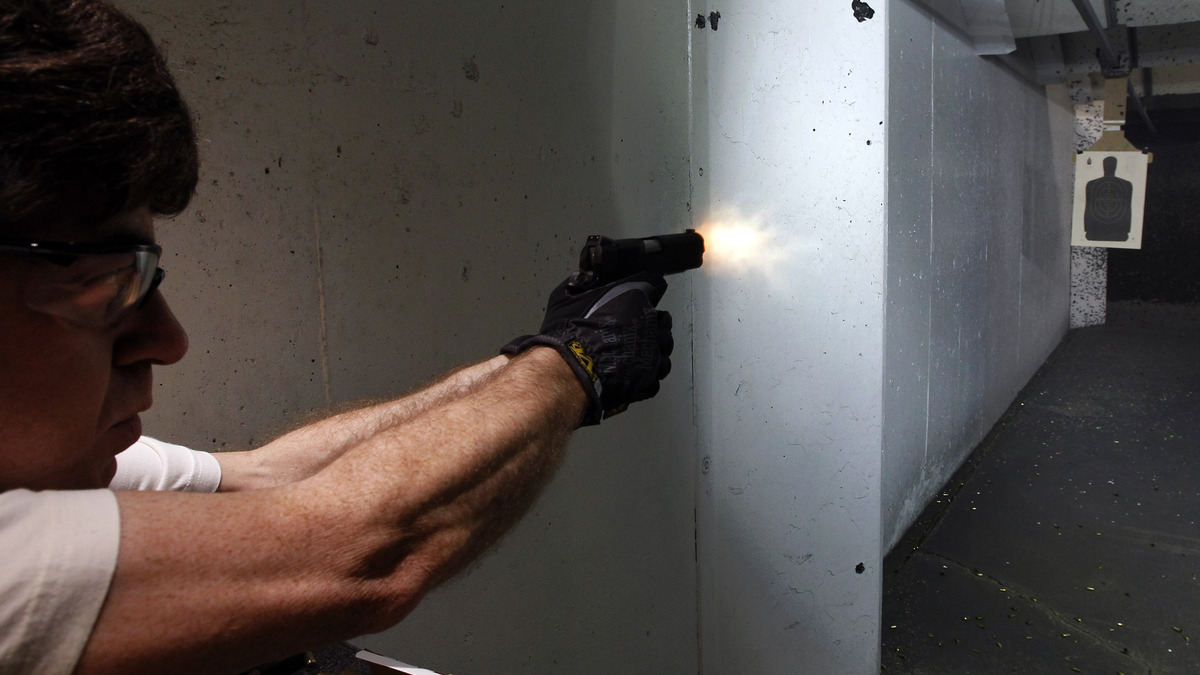 The NRA and some concealed-carry activists say the best defense against gun violence is armed "good guys." Here, a man fires his pistol at an indoor range in Aurora, Colo., last summer.

As the nation ponders how to stop the next mass shooting, the gun rights movement offers a straight-forward formula, laid out famously by NRA Executive Vice President Wayne LaPierre.

"The only thing that stops a bad guy with a gun is a good guy with a gun," LaPierre said last month, as his group responded to the elementary school massacre in Newtown, Conn.

In Washington state, one such "good guy" — a private citizen who drew his gun in defense of others — paid a heavy price.

Dan McKown is a comedian. He used to do stand-up, and he has a performer's habit of always being just a little bit "on."

He always has a joke ready — even when he's recalling the moment he locked eyes with a mass shooter.

"The first word that honestly went through my head was, 'bugger.' Clearly, too much British TV," he says. 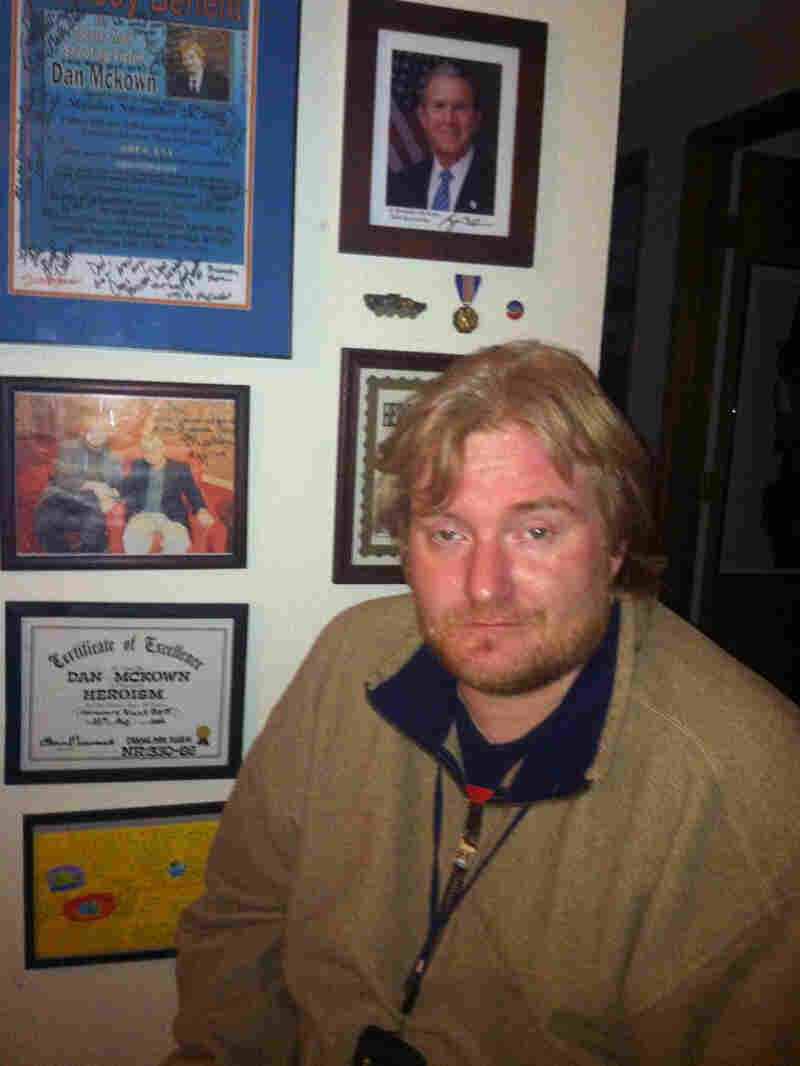 Dan McKown, who confronted a gunman at a shopping mall in 2005, says he doesn't regret his actions, although he was shot five times and is now in a wheelchair. Martin Kaste/NPR hide caption 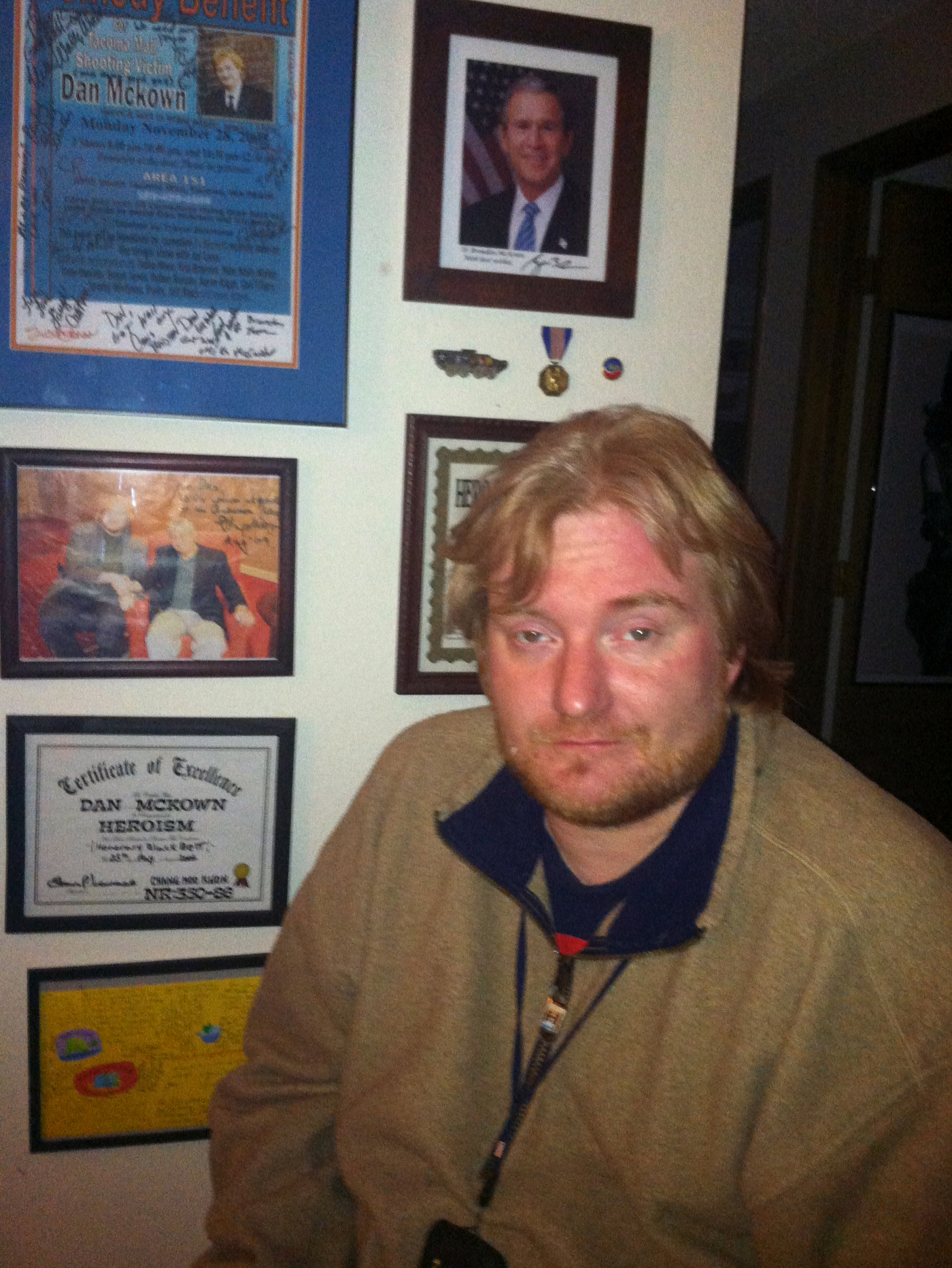 Dan McKown, who confronted a gunman at a shopping mall in 2005, says he doesn't regret his actions, although he was shot five times and is now in a wheelchair.

It was 2005, at the Tacoma Mall in Washington state. McKown had been chatting with friends when gunshots rang out. Everyone hid; but McKown had a pistol. For years, he'd carried a legal concealed weapon, with the thought that someday he'd protect others. Now it seemed that moment had come.

Gun drawn, McKown scanned for the shooter. But the gunshots stopped. Unsure what had happened, McKown tucked his pistol back under his coat — just as the shooter walked right in front of him.

"So anyway, I'm standing there like Napoleon Bonaparte, with his hand, you know, in his jacket," he recalls. "So I said, 'Young man, I think you need to put your weapon down.' "

That moment of vulnerability gave the other guy just enough time to shoot McKown. The bullet hit his spine, and he found himself unable to aim his own gun.

"I prayed the most un-Christian prayer of my life, which was: 'God, please let me shoot this guy before he kills somebody else.' Because I was sure I was dead," McKown says. "Then he hit me again, again, again. And he spun me like a pinwheel."

So what did McKown do wrong? At the time, that was a hot topic among concealed-carry advocates. Some said he should have stayed behind cover. Others said his mistake was drawing against someone who was already pointing a gun at him.

At a shooting range in Bellevue, Wash., a company called InSights trains civilians to prepare for "active shooter" situations. Instructor John Holschen thinks McKown may have been a victim of his own sense of fair play — especially when he gave that verbal warning.

InSights offers classes like "Tactical Handgun" and "Advanced Confrontation Simulations." But most gun owners never get this kind of training. In fact, in some states — like Washington — a concealed-carry permit requires no training at all. And that's why the prospect of armed civilian "good guys" can make police uneasy.

"Good intentions don't get you to the justifiable and safe end point," says assistant chief Jim Pugel, a 30-year veteran of the Seattle Police Department. He doesn't oppose responsible gun ownership, but Pugel says civilians need to understand what it takes to use one in public.

"The ability to safely handle and use a gun in a lawful manner is a perishable skill," he says. "If you don't practice on a regular basis, psychologically, physiologically, you will likely not respond properly."

But cops can also recognize the potential value of armed "good guys" — particularly in emergencies involving a madman.

Lomax says that in active shooter situations, the old rule was to secure the location and wait for SWAT.

"Well, in Columbine they waited for like 45 minutes, and in the meantime, numerous kids were shot and killed," he says. "So, post-Columbine, they looked at it and said, 'We cannot wait.' "

Police now believe an early challenge, even an unsuccessful one, by a cop or a civilian — can rattle a mass shooter. It can push him to a different course of action.

And that brings us back to Dan McKown, shot five times, lying on the floor of the Tacoma Mall.

But maybe he didn't. Because right after the confrontation, the shooter stopped spraying bullets. He ducked into a store and took hostages, and eventually gave himself up.

No one was killed in that incident, but seven people were wounded, and McKown's injuries were the worst. Today he's in a wheelchair and lives with excruciating pain. But he doesn't sit around asking, "Why me?"

It's not a course of action he recommends for everybody, but McKown says it's a choice he does not regret.