Accessibility links
Bird, Plane, Bacteria? Microbes Thrive In Storm Clouds Microbes can thrive in extreme environments, from inside fiery volcanoes to down on the bottom of the ocean. Now scientists have found a surprising number of them living in storm clouds tens of thousands of feet above the Earth. And those airborne microbes could play a role in global climate. 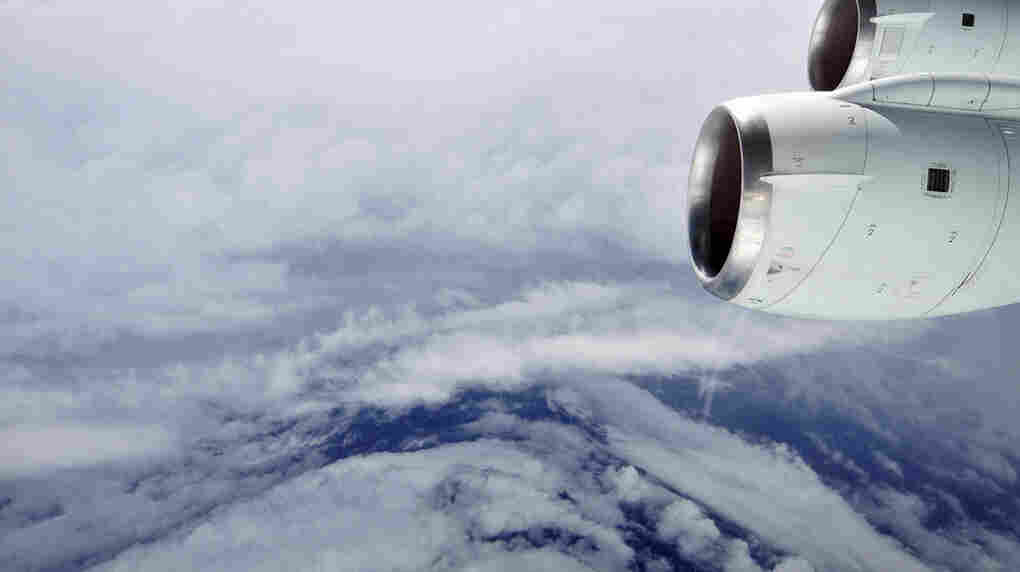 The eye of Hurricane Earl in the Atlantic Ocean, seen from a NASA research aircraft on Aug. 30, 2010. This flight through the eyewall caught Earl just as it was intensifying from a Category 2 to a Category 4 hurricane. Researchers collected air samples on this flight from about 30,000 feet over both land and sea and close to 100 different species of bacteria. Jane Peterson/NASA hide caption

Microbes are known to be able to thrive in extreme environments, from inside fiery volcanoes to down on the bottom of the ocean. Now scientists have found a surprising number of them living in storm clouds tens of thousands of feet above the Earth. And those airborne microbes could play a role in global climate.

It's been known for a long time that there are microscopic life forms floating around high above our heads. Researchers have collected them from the air above rain forests and mountains. They've found them in snow and hail. And since the 1920s, they've sometimes used planes to collect samples.

Even Charles Lindbergh tried his hand at aerial microbiology. Six years after his historic trans-Atlantic flight, he used a tube-shaped contraption called a "sky hook" to collect fungi and pollen from a red-winged monoplane.

But most sampling efforts to date have been over land and close to the Earth's surface. Athanasios Nenes, an atmospheric chemist at the Georgia Institute of Technology, says we still don't know much about which microbes are living high up in the atmosphere or way out over the ocean. 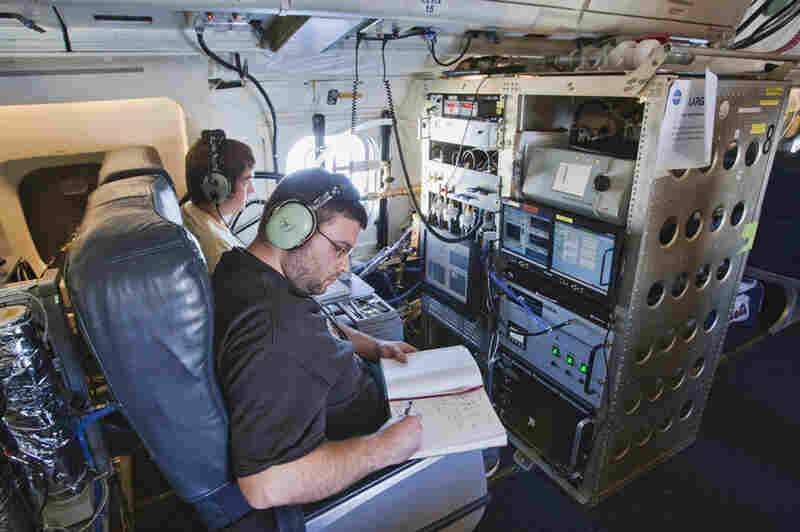 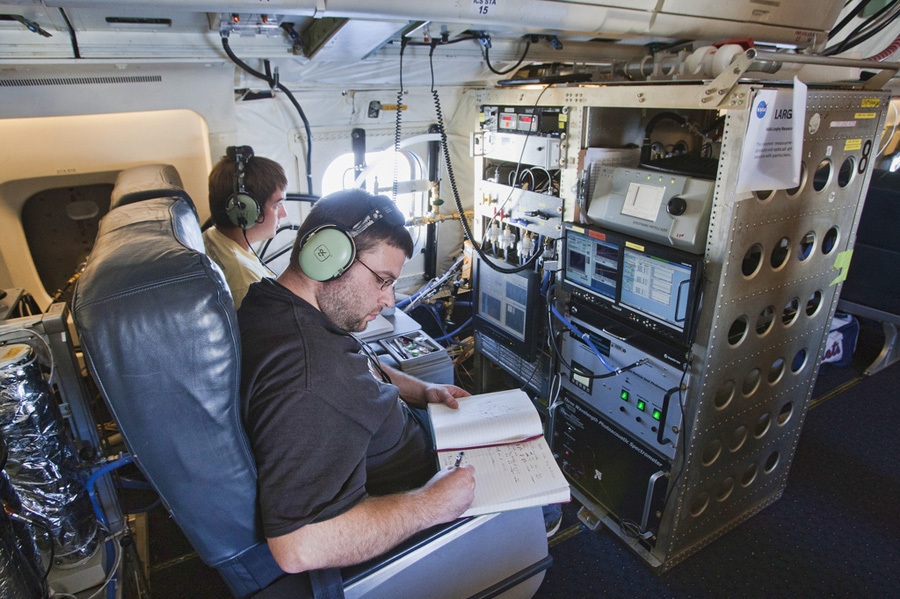 Terry Lathem, a graduate student in Georgia Tech's School of Earth and Atmospheric Sciences, takes notes aboard a NASA DC-8 aircraft gathering samples of microorganisms in the atmosphere.

To find out, Nenes had some of his students hitch a ride on a NASA airplane that was on a mission to study hurricanes. They made multiple flights and were able to collect air samples from about 30,000 feet over both land and sea. The samples turned out to contain some fungi — and a lot of bacteria. "And this was a big surprise because we didn't really expect to see that many bacteria up there," Nenes says.

It's not exactly a friendly place. It's cold, it's dry, and there's a lot of damaging UV light.

But Nenes says the bacteria seemed to be able to handle it. "They were alive," Nenes says. "More than 60 percent of them were actually alive, and they were in an active state that that you could say they should be metabolizing and eating things that are up there."

Back on the ground, other members of the research team used genetic techniques to identify the bacteria. One of them was Georgia Tech microbiologist Kostas Konstantinidis.

"We were able to see at least close to 100 different species, of which about 20 were in most samples," Konstantinidis says. Some of those 100 species were from the ocean. Others came from the soil and from fresh water.

There were even some E. coli. But Konstantinidis says he's not sure yet whether it's a type that makes people sick. The sample is still being analyzed. "My feeling is it will also include pathogens," he says, "but we don't have direct evidence about that yet."

He says if pathogens are getting swept up into the atmosphere, it might possibly have implications for the way diseases spread. But the vast majority of bacteria are harmless.

He says a more important implication of the study has to do with how clouds are formed.

Up at around 30,000 feet, most clouds are made of ice crystals, not water droplets. To start forming, those ice crystals need to grow around some kind of particle.

Lynn Russell, an atmospheric chemist at the University of California, San Diego, wasn't involved in this research. "Prior to this study, we'd had very little evidence that bacteria were a substantial contribution to the particles that are up there," Russell says.

She says there's still so much we don't know about how particles affect cloud formation, and how clouds affect climate. "One of the most uncertain aspects of predicting climate to this day is how we represent clouds and precipitation in global models," Russell says.

But before the effects of airborne bacteria can be included in climate models, Russell says we're going to need to know a lot more about them. Nenes and Konstantinidis agree their current study raises as many questions as it answers. Their research is published in the Proceedings of the National Academy of Sciences.