Accessibility links
Tunisia's Salafis: 'A Danger' Or Preachers Of God's Law? Critics call the country's Salafis a threat to the ideals of economic prosperity, civil liberties and gender equality. The Salafis insist that only their rigid interpretation of Islamic law can govern Muslims. Their stand puts Tunisia's moderate Islamist leaders in a difficult position. 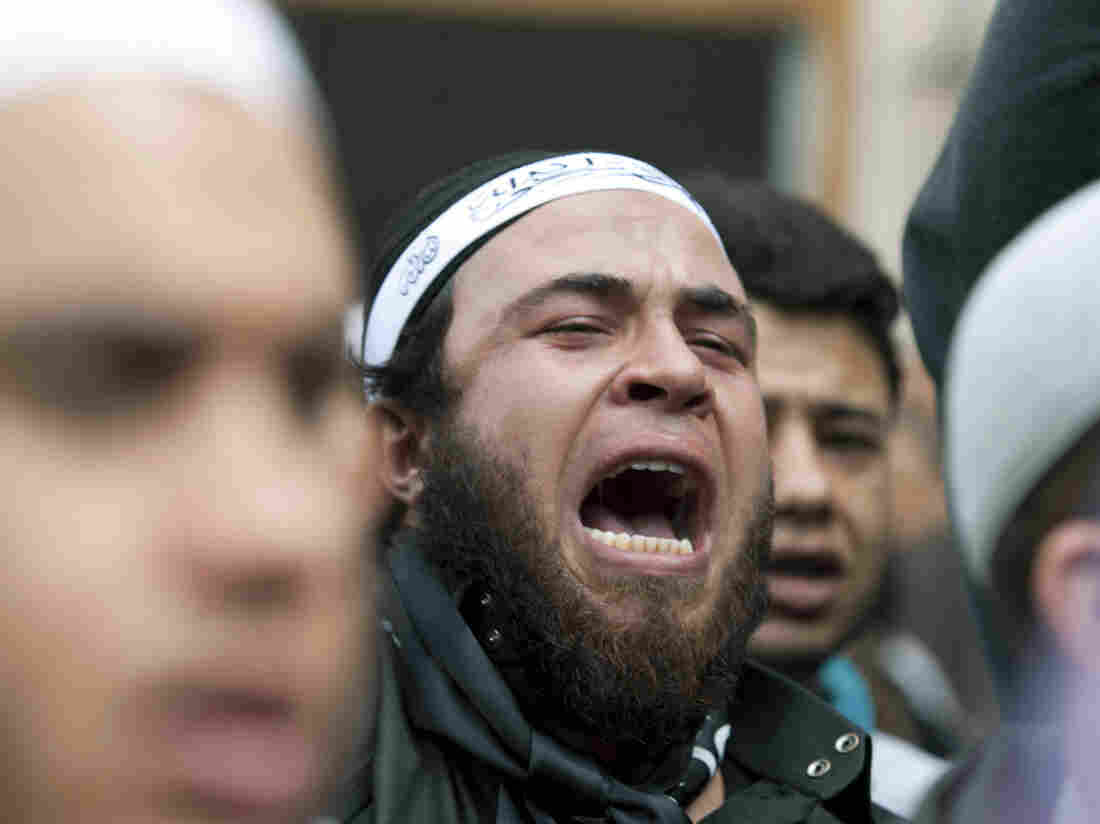 A demonstrator shouts anti-government slogans as he stands in front of the Justice Ministry in the Tunisian capital, Tunis, on Nov. 6, 2012, as part of a demonstration by radical Salafi Muslims protesting against the imprisonment of hundreds of Salafist militants. Amine Landoulsi/AP hide caption 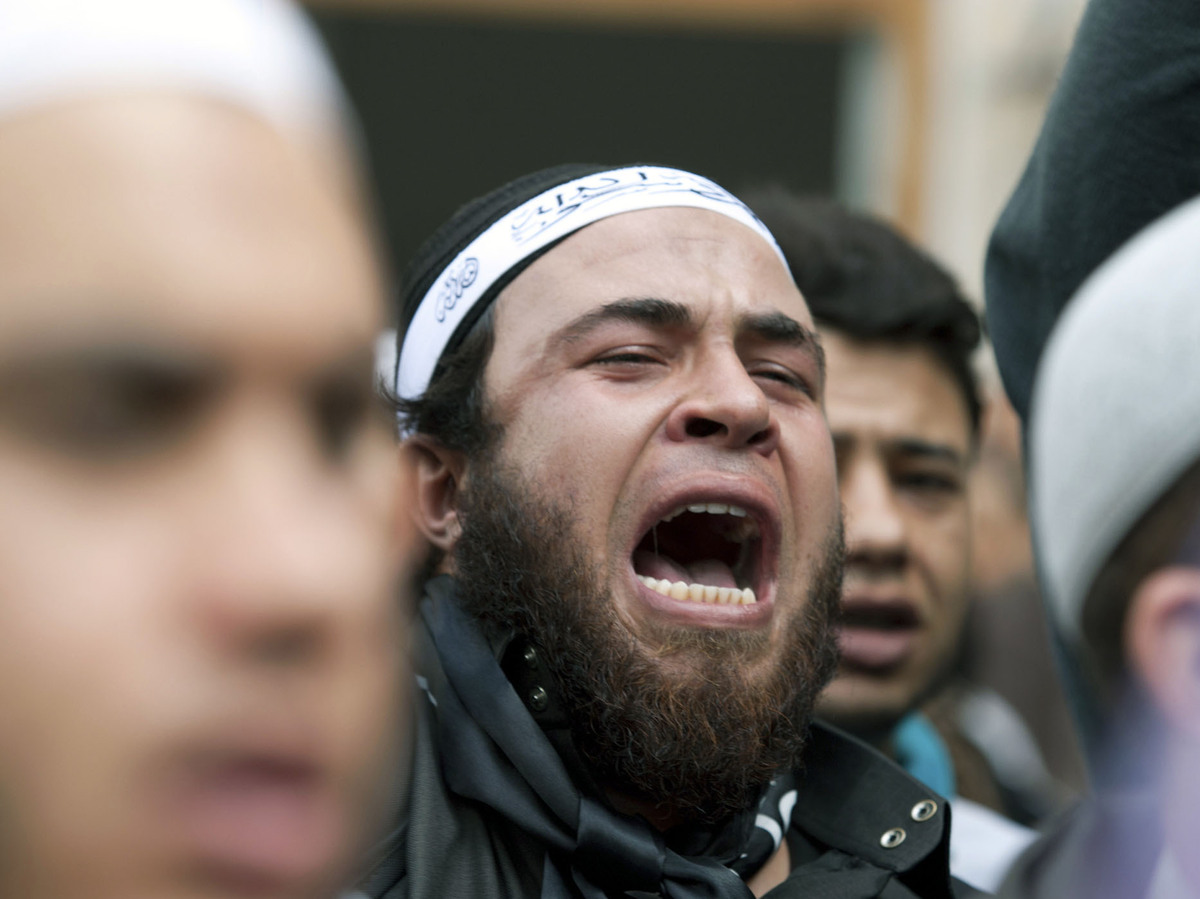 A demonstrator shouts anti-government slogans as he stands in front of the Justice Ministry in the Tunisian capital, Tunis, on Nov. 6, 2012, as part of a demonstration by radical Salafi Muslims protesting against the imprisonment of hundreds of Salafist militants.

The uprisings of the Arab Spring unleashed a new political force in the region — Salafis, ultraconservative Muslims who aspire to a society ruled entirely by a rigid form of Islamic law. Their models are the salaf, or ancestors, referring to the earliest Muslims who lived during the lifetime of the Prophet Muhammad.

To their critics, the Salafis are religious fanatics who are trying to drag the region back to 7th century Arabia. But the Salafis maintain that they are offering the purest alternative to the dictatorships that have long dominated the region.

In Tunisia, where the Arab Spring began, the Salafis pose a troubling question: What do you do with a vocal and sometimes violent minority that refuses to adhere to the democratic process?

At a recent protest outside the Justice Ministry in Tunis, hundreds of Salafis condemned the moderate Islamist-led government as oppressors.

The rally was called to demand the release of some 900 Salafis arrested for various acts of violence. Two of those detainees have since died in their cells after long hunger strikes.

Unlike their counterparts in Egypt, the Salafis in Tunisia reject democracy; they insist that only their rigid interpretation of Islamic law can govern Muslims. Almost all Salafis boycotted the first post-revolutionary elections after Tunisia's dictator was ousted in 2011.

This has put Tunisia's moderate Islamist leaders in a difficult position. To the secular elite, the government is too soft on the Salafis, while the Salafis accuse the government of selling out the purest form of Islam.

"They are entitled to their rights. As long as they respect the law of the land and they behave as citizens. They don't have the right to impose their lifestyle upon anybody by force," says Said Ferjani, a senior member of the Islamist Ennahda Party that leads the government.

The problem with the Salafis, he says, is that they don't recognize the state.

"We want to push them, to drag them, into the sphere of politics because they are citizens," he says.

But the few who turn to violence must be prosecuted, Ferjani says.

The most radical of Salafis, carrying sticks and swords, have attacked cultural events and shrines they consider un-Islamic. They ransacked stores selling alcohol and clashed with the police. Salafi militants are also accused of leading last year's fiery attacks on the U.S. Embassy and the American school in Tunis.

Secularists such as Yassine Brahim accuse the Ennahda-led government of not doing enough to stop the violence because of its sympathies with the Salafis. "These people are out of the law. If they are arguing for jihad, for violence it is a big problem," he says. "And Ennahda has a lot of hesitations about how to manage this problem."

Brahim is the the secretary general of Al Joumhouri, an umbrella party of secularist groups. He says his party's goal is to preserve the image of Tunisian society as moderate and cosmopolitan.

Critics of the Salafis say they are a threat to the revolutionary ideals of economic prosperity, civil liberties and gender equality.

"They accuse people of being infidels; they don't accept dialogue," he says in Arabic. "Such stiffness is what made people reject them. This is all a result of their ignorance of the reality and the history of Islam."

Egypt's most successful Salafi political party, Nour, has sent emissaries to Tunisia and Libya to try to coax Salafis into politics. A spokesman for the Egyptian party said that is the only way the Salafis will achieve their ultimate goal of implementing Islamic law.

But Iskander Boughanmi, a young Salafi cleric in Tunisia, says in Tunisia the Salafis are different. They don't believe democracy is the path to God's law.

Boughanmi accuses the Tunisian government and the media of demonizing Salafis, painting all of them as violent militants. Their only crime, he says, is preaching Salafi doctrine. But when we try to spread our message about God's law, he adds, we are stopped and we are persecuted.