Accessibility links
Sand After Sandy: Scientists Map Seafloor For Sediment On the deck of a 27-foot boat off the shore of Long Island, researchers are using sonar to study the sand and sediment that washed away from the system of protective barrier islands and beaches by Hurricane Sandy. 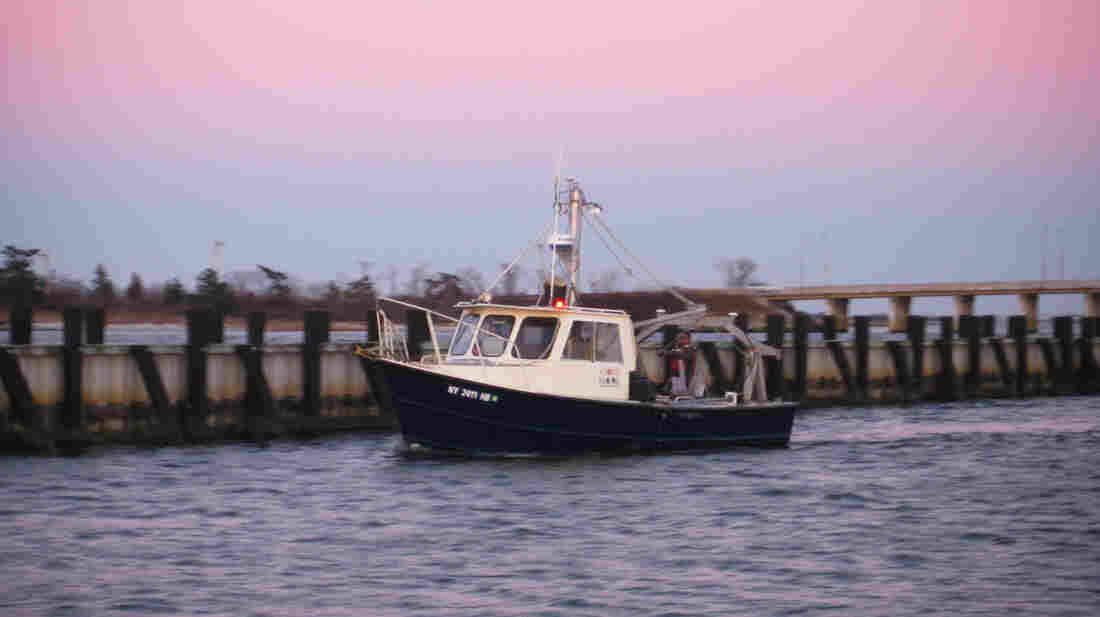 Congress has now agreed to give some $60 billion to states damaged by Hurricane Sandy. A lot will go to Long Island, one of the hardest hit areas. Besides damages to homes and businesses, its system of protective barrier islands and beaches were partially washed away.

Scientists are trying to find out where that sand and sediment went, and whether it can be used to rebuild Long Island's defenses.

In January. On a boat in Long Island Bay.

The field conditions are not pleasant. But to ocean scientists, this is a crime scene; if you want fingerprints, you have to move fast.

That's why a team of them has driven an SUV all the way from the University of Texas' Jackson School of Geosciences to a snow-covered dock on Long Island's south shore. As boats bob in the waves, the team unpacks gear. A 25-knot wind blows across the water.

Beth Christensen from Long Island's Adelphi University is huddled inside her car with a map, where it's warm.

"We're looking for the sand that got removed both by the wash-over as the surge moved through," she explains, pointing out sections of the barrier islands that got washed away or eroded, and likely places where the sand and sediment went. 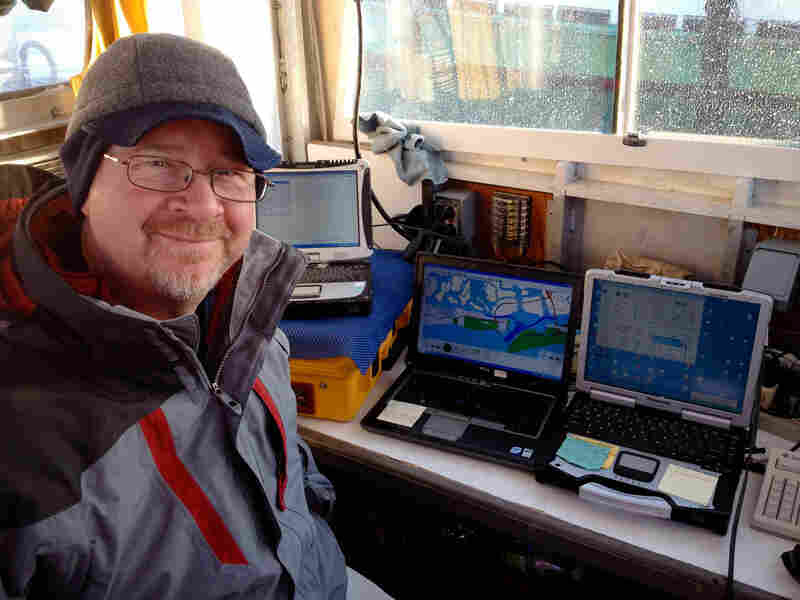 John Goff supervises the sonar mapping of the seafloor along the south shore of Long Island. The scientists are trying to track down where Sandy deposited sediment and sand from the barrier islands from the beaches. Christopher Joyce/NPR hide caption

Long Island juts out into the Atlantic like New York City's thumb. On the south shore, sand dunes and barrier islands protect it. Sandy robbed those islands of sand and sediment. That makes Long Island more vulnerable. If that sand lies just offshore, it could wash back up and restore beaches on its own. If not, someone will have to either dredge it up or replace it. That would be a very expensive proposition.

Out on the dock, a 27-foot work boat idles in a slip. Its sonar instruments capture images of the seafloor. The images are so clear you can tell the difference between sand and mud and rock — even the type of sand grain. That's important if that sand gets put back on the beaches. Says Christensen: "If you can't find the right grain size, you're going to change the whole character of your beach. So if you walk the beach and you find piles of stinking, rotting organic rich mud on the beach, that's not really going to enhance tourism."

Once we're out in the bay, chief scientist John Goff turns on one of its sonar scanners, called a CHIRP. It starts, well, chirping. Relentlessly. Goff laughs. "That's the CHIRP ... what we get to listen to," he says.

We drive back and forth in the bay. Goff calls it "mowing the lawn." Goff admits this part of seafloor mapping is boring. What's interesting is the interaction between the shore and the seafloor. "They feed off each other," he says. "You know the seafloor sand could be a source for replenishing the beach, you know, naturally as well as artificially. Or the beach can be sending sediment out to the ocean. So it goes back and forth."

Goff learned to locate refugee sand in the Gulf of Mexico after Hurricane Ike in 2008. He's trying to perfect the method. He thinks shore communities are going to need it. "We're going to expect more storms in the future if global warming continues," he says, "so understanding the impact of these storms is really important."

Not long into the day, things start to go awry. The gearshift breaks. The team fixes that but then the sonar computers mysteriously quit. We call it a day and swing into the dock. A stiff breeze pushes the boat around like a cork, until we run into another docked boat, with a sickening crunch, followed by a few choice words from the skipper.

No damage done though; just another part of doing seat-of-the-pants research in a freezing windstorm on an unfamiliar boat. "Frustrating," says Goff. "We got a little bit of data, it's not a great morning, but in the scheme of things it wasn't too bad."

A lot of that data ends up at Christensen's lab at Adelphi University. The room is cramped with several boxes of sand and sediment in clear plastic bags — sand and sediment hauled up to verify that what the sonar images detect is really there.

Although the team is here to help figure out how to rebuild these barrier islands and what that will cost, they are somewhat dubious that anything will be able to protect people living right along the shore. Christensen says it's clear that the coastline here is dangerous and that the threat of flooding continues to change in some unpredictable way. Defenses like dunes and groins and rip-rap or even concrete barriers are only stopgaps. Some people, she says, should move. But how do you convince people whose roots are here to leave?

"That's a different story," she says with a sigh. "Whether or not politicians are as interested in understanding the science behind the problem as they are in getting re-elected and pleasing a constituency that probably doesn't really want a lot to change."

And that bothers Midwesterner Cassandra Browne, another team member. Browne grew up with tornadoes in Missouri. She says a tornado can hit anywhere. You can't pick a place that's safe. But everyone knows that hurricanes hit coastlines the hardest.

"I have very little sympathy for people who chose to go out there and rebuild and get smashed," she says, "and then use taxpayer's money from all over the nation to rebuild and put more sand on the beaches when we're sitting here telling them, 'Look, that's a stupid idea.' "

Someone who knows what it's like to get smashed is Rob Weltner, a retired builder, electrician and lifelong Long Islander. He shows me around the echoing hulk of a maritime museum he runs in the coastal town of Freeport. The museum was damaged by Hurricane Irene in 2011. Then Sandy hit it again a year later. "Here's the high water mark from Sandy," he says with a sad laugh, showing me a red line along the wall. "Chest high." On Weltner, chest high is almost 5 feet.

Most everything — exhibits, furniture, walls — is ruined.

He says peoples' attitudes here are different now — like, whether the climate is really changing. "Man, like overnight they went from 'Hell no' to 'Hell yes.' That is the surprise that I saw, that all these people who used to give me a lot of grief about sea level rise and climate change, are now asking me what they can do."

Weltner laughs at that. He said he's almost been in bar fights over that topic.

He says he understands Browne's skepticism about the nation's taxpayers footing the bill over and over. He freely acknowledges that he used federal money himself to raise his house 10 feet in 2002 — before Irene and Sandy hit. But he says one federal grant is all he's comfortable asking for.

For people living in Sandy's wreckage, it's a real dilemma. People really don't know what to do. Rebuilding will cost a lot. Some want to; others want to leave. Property values are rock bottom now along the shore. People are in a daze. "They're completely freaked out," Weltner says. "Nobody seems to have a real good grip on what to do and how to fix this because people think it's going to happen again. Should they rebuild? But they don't have any other place to go."

This is where science should have answers, like, what's the best way to prepare for the next one? At least, that's the view of Jamie Austin, the senior member of the Texas team.

"We need to show society they can use science to help them prepare for what inevitably will be the next cataclysm," Austin says while thawing out in a motel room after a cold day on the water.

Austin says teams like this one — he calls it a "Rapid Response" approach to science — need to parachute in after big storms to figure out what happened. They have to move fast to gather the evidence, to do the "storm forensics" before the evidence washes somewhere else. But no matter what they find, Austin says, people along the shore should be prepared for bad news. "The notion that the coast is a constant is a lie," he says emphatically. "It's a myth. This coastline is the front line. It's the battleground."