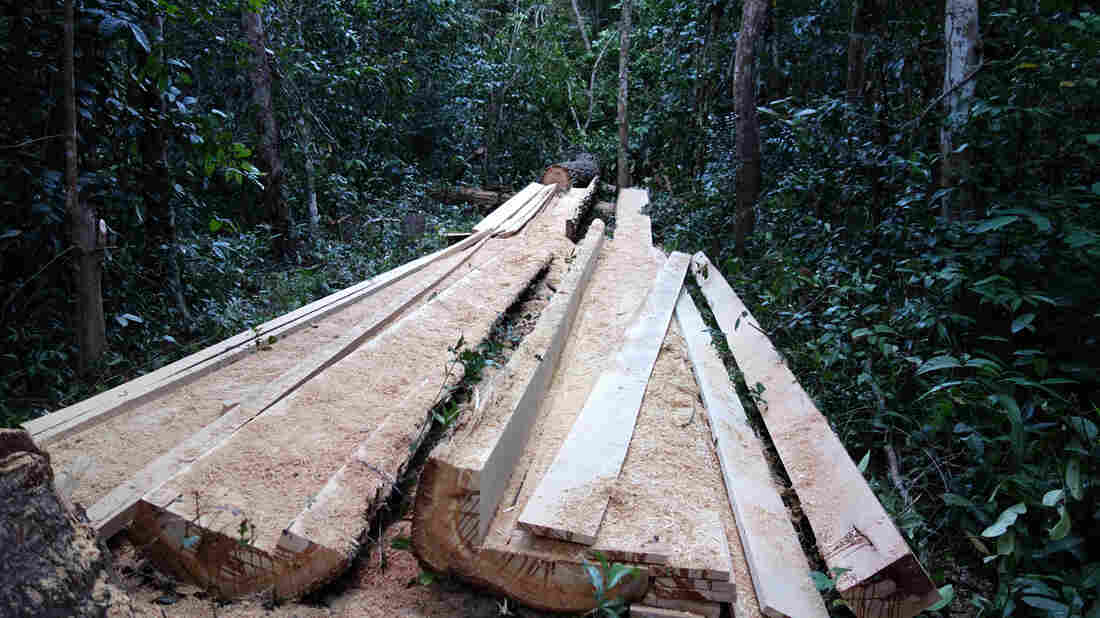 Illegal logging is widespread in Cambodia, and efforts to prevent it have had only a limited impact. Much of the wood is destined for China. Michael Sullivan/NPR hide caption 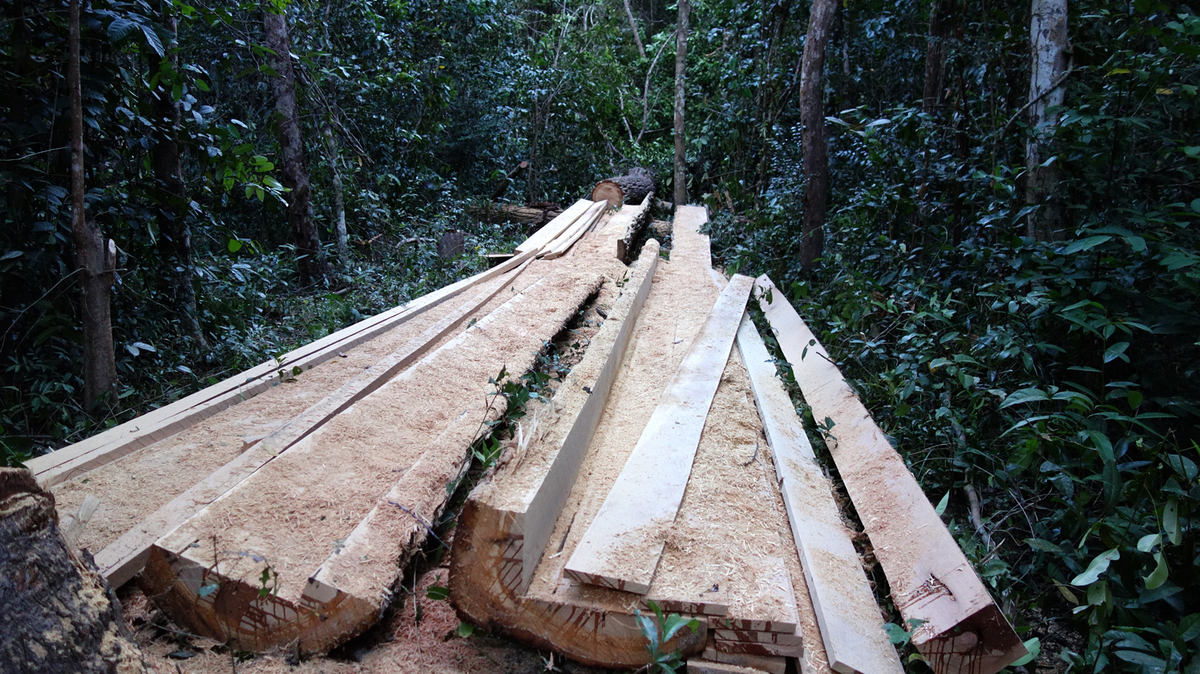 Illegal logging is widespread in Cambodia, and efforts to prevent it have had only a limited impact. Much of the wood is destined for China.

China's demand for natural resources is being felt in a big way in Cambodia.

Prey Lang forest — an eight-hour journey north and east of the capital, Phnom Penh — is one of the forests where illegal loggers see money signs on the trees.

"It's just like in the United States in the 1960s, when every single redwood tree was a target for illegal logger[s]," says Suwanna Gauntlett, head of the Phnom Penh office of Wildlife Alliance. "It's the same thing in Cambodia. It's a natural resource worth a lot of money."

And many people with money — particularly China's growing middle class — are eager to spend it on luxury hardwood furniture, says Tracy Farrell of Conservation International.

"You also have the fact that other countries have been culling or reducing the extraction of their own luxury wood," Farrell says. "Thailand has been becoming much more strict about illegal wood leaking out of their country, so that puts the pressure on the countries that are less strict. ... Laos and Cambodia are really, really struggling."

Both Conservation International and Wildlife Alliance have been working with Cambodia's government to protect some forests. Those efforts have been hugely successful in slowing the rate of forest decline there, but without this protection, Gauntlett says, it would be a different case.

Six months — six to eight months. It'd [the forest] all be gone. It would be wiped out, believe me.

"Six months — six to eight months," she says. "It'd all be gone. It would be wiped out, believe me."

But Prey Lang forest doesn't have the same kind of protection. And the forests are not just threatened by illegal loggers, but by so-called economic concessions — large tracts of land awarded by the government to agribusinesses on the forests' borders. It has become land often used to launder wood taken out of the forest illegally.

'We All Depend On It To Live'

Eoun Sopapheap, a local activist in Sandan, says he's tired of watching the forest disappear. He and a few others journey into the forest to catch illegal loggers in the act.

"The forest is our rice bowl," he says with the help of a translator. "We all depend on it to live. We tap the resin trees there and sell the sap in the market, and we use the money to buy rice and to pay for our children's school fees. If we lose those trees, we lose everything — so it's up to us."

He fires up his motorcycle and starts the trek into the forest. In less than an hour, the group spots the first of many newly fallen trees not far from the road. They hear a chainsaw humming in the distance.

It's a resin tree, one of the men explains — its trunk still oozing sap. It's worth about $750 to a logger, he says. But for those who live here, a source of sustainable income has now been eliminated forever. The chainsaw draws the group deeper into the forest.

The Hunt For Illegal Loggers

The underbrush is thick and rips at the flesh. It takes about 30 minutes to go 100 yards, then a clearing — and a glum-looking logger.

He says he's not from around here; his boss offered him $10 to cut this tree.

"I know it's illegal," he says, "but what can I do? I don't have any other work, and I have to support my family."

The activists let him go, but they keep his chainsaw. They're after bigger fish, and find one on the road a few miles farther in.

It's a tractor pulling a large stack of freshly cut timber. The man who owns it, the driver claims, is the district deputy police chief, who shows up not long after, looking annoyed.

I know it's illegal, but what can I do? I don't have any other work, and I have to support my family.

An illegal logger in Cambodia

The activists tell him they're burning the wood and reporting him to the Interior Ministry. The policeman protests, claiming the wood was legally cut and belongs not to him, but to the owner of a land concession in the district.

Chhim Savuth, with the Cambodian Center for Human Rights, doesn't believe any of it. First, he says, that land concession is some 30 miles from here, and the license expired a year ago.

Exasperated, the police chief whips out his phone and says he's calling his boss. But he's not talking about his police superior. He's talking about the owner of the company — the man paying him to protect the illegal shipment. He walks away a bit, but is still within earshot.

The human rights activist listens in and says he overhears the boss telling the cop to offer the activists money to make the problem go away. But it doesn't come to that.

Just then, several hard-looking men on motorbikes pull up — gun thugs serving as reinforcements. The activists are suddenly outnumbered in the middle of the forest, and it's getting dark. They decide to retreat.

Back in the capital, Ou Virak, who heads the Cambodian Center for Human Rights, says that was a good call — especially with the police involved.

"In any of these situations — in the middle of nowhere, with so much money and so much interests at stake — they're willing to do quite a lot," he says. "So it could turn ugly pretty quickly. If anything happened, they could just blame anybody."

Virak says the incident perfectly illustrates the extent of the collusion between local officials and the illegal logging trade in many parts of the country, and how difficult it will be to stop the practice.