Accessibility links
Drought Causes Ripple Effect Along Mighty Mississippi River Low water upstream threatens cargo traffic, and saltwater has encroached on the mouth of the river. Now, officials up and down the river are talking about the need for a comprehensive water resources plan. 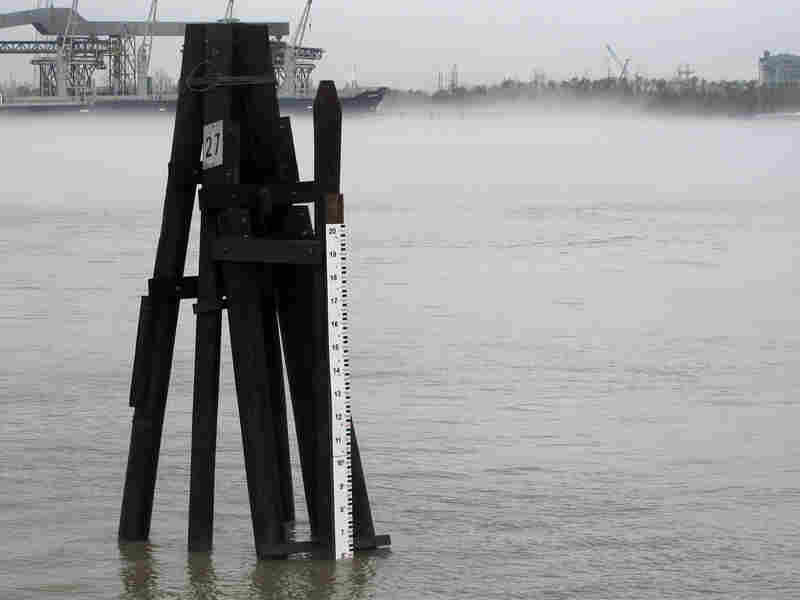 The Mississippi River is flowing at near normal levels again in New Orleans, as measured by this old-fashioned staff gauge behind the U.S. Army Corps of Engineers New Orleans District office. The Corps has been fighting saltwater encroaching up the mouth of the Mississippi because of the persistent drought. Debbie Elliott/NPR hide caption

The persistent drought is raising questions about how the Mississippi River is managed — both upstream and down.

While cargo traffic upriver has gotten lots of attention, the drought is creating a different set of problems downriver at the mouth of the Mississippi, where saltwater has encroached.

An old-fashioned staff river gauge behind the New Orleans district office of the U.S. Army Corps of Engineers shows the Mississippi is running just shy of 6 feet above sea level at the river bend.

"Just about back to normal at this point, but it's only done that really since Christmas," says Mike Stack, chief of emergency management for the corps. He's been dealing with near historic lows on the river here since August. The biggest problem is saltwater from the Gulf of Mexico coming up the mouth of the Mississippi and threatening industrial and municipal water intakes more than 60 miles inland.

During normal flows on the Mississippi, freshwater is pushing down and out of the mouth of the river. But with low flows during drought, the Gulf of Mexico starts to push saltwater up the Mississippi River.

"Saltwater is denser than freshwater and so it travels on the bottom," says Stack. "It travels in what we call a wedge."

To stop the encroaching wedge, the corps built a $5.8 million sill on the bottom of the river. It's like a deep underwater levee designed to hold the saltwater at bay.

The sill has held since September, and the wedge is now receding. But it wasn't enough to prevent the saltwater from reaching the drinking water intakes for Plaquemines Parish, the parish south of New Orleans that stretches all the way to the mouth of the Mississippi.

"We've been through five hurricanes and an oil spill, had a couple of chemical spills, and right before this salt water intrusion, I said, 'What's next?' " says parish President Billy Nungesser.

The parish had to barge in fresh water from upriver and buy drinking water from neighboring Orleans Parish. Nungesser is worried about next time.

"The real challenge will be if we see a worse situation than we saw last year where that wedge reaches New Orleans because you couldn't barge in enough water to satisfy the needs of the city of New Orleans," he says.

'Things Won't Be The Same'

The river is deep and wide here with at least a 45-foot-deep channel. Combine that with the proximity to the Gulf and you have an ideal shipping gateway.

At the busy Port of New Orleans, stevedores use cranes to load crates of chicken onto the Skulptor Tomskiy, a hulking white ship bound for Eastern Europe. Ships come in from the Gulf bringing everything from rubber and steel to coffee and twine. Barges come down river carrying grain, fertilizer and other goods.

"It's a huge convergence point, says Gary LaGrange, president and CEO of the Port of New Orleans.

He says the five ports on the lower Mississippi River from Baton Rouge south to the Gulf of Mexico constitute the largest port system in the world.

"Bigger than Rotterdam, Singapore, Shanghai or any of those," he says.

LaGrange says the drought hasn't hurt the Port of New Orleans yet. But upriver, where the channel gets shallow north of Baton Rouge, barge loads are lighter. 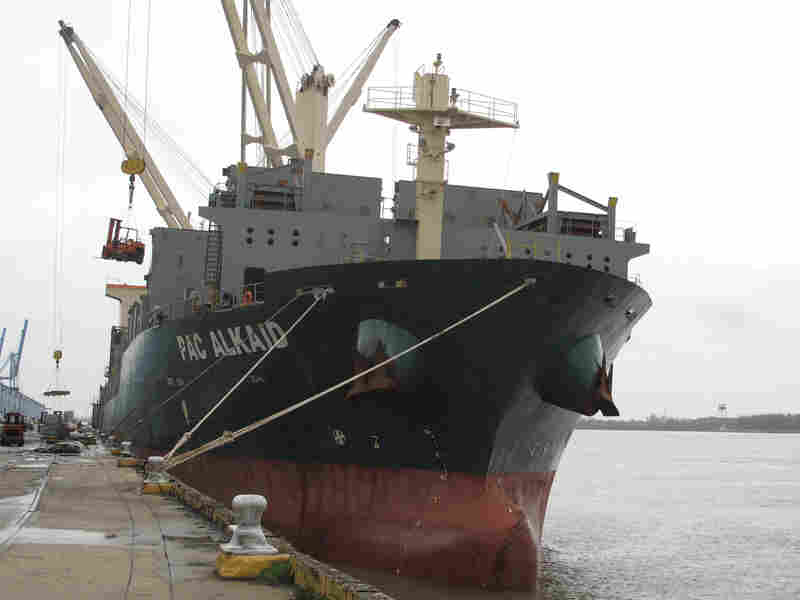 International ships call at the busy Port of New Orleans. It's a major shipping convergence point on the Mississippi River. Ships come upriver from the Gulf of Mexico with imports from abroad, and barges come downriver, bringing U.S. goods for export. Debbie Elliott/NPR hide caption 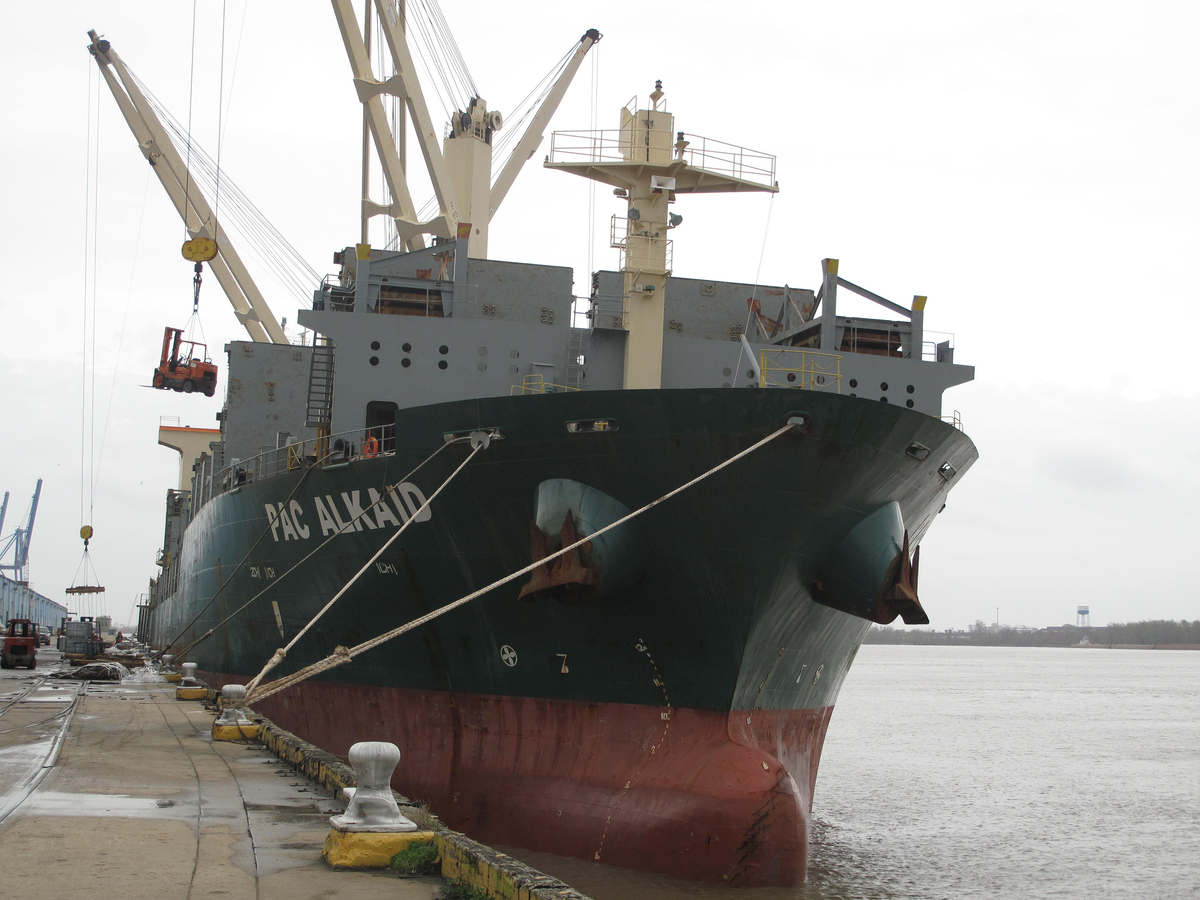 International ships call at the busy Port of New Orleans. It's a major shipping convergence point on the Mississippi River. Ships come upriver from the Gulf of Mexico with imports from abroad, and barges come downriver, bringing U.S. goods for export.

"Anything that's got to transit between [Cairo, Ill.] and St. Louis, we're concerned. But so far so good," says LaGrange.

But the drought does raise more complicated questions for Louisiana's deteriorating coast. The delta depends on high water to bring sediment that helps rebuild coastline. Sediment that is choked off in a drought.

Mark Davis, who heads the Tulane Institute on Water Resources Law and Policy, says with persistent drought and sea level rise, the future of Louisiana's fragile coast is at best uncertain.

"Things won't be the same. We will have to be real clear on what kind of river we need delivered here. We have no idea at this point how big a river we're going to need 20 years from now to maintain the viability of this lower end," says Davis.

Davis says talk of diverting water from the Mississippi system to help arid Western states has officials up and down the river talking about the need for a comprehensive water resources plan for the mighty river.

"It's the sort of thing that the Great Lakes did when they did their compact not so long ago when they essentially declared we're not sure what we need water for but we're pretty sure we're not a mine," he says.

"The Mississippi basin is an orphan. It has a lot of users and a lot of interests who have found the Mississippi very beneficial to their various interests but no one is taking care of the whole," he says.

Whether its drought now or flood next year, Marmillion says it's time to treat managing the Mississippi as a legacy issue.