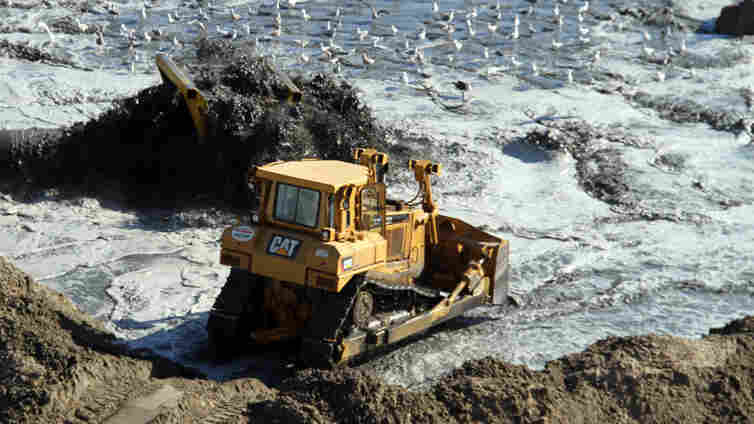 Ongoing beach nourishment, like this project in Viriginia Beach, has been the topic of debate. Some people say it's needed to protect beach communities; others decry the costs. Pam Spaugy/U.S. Army hide caption 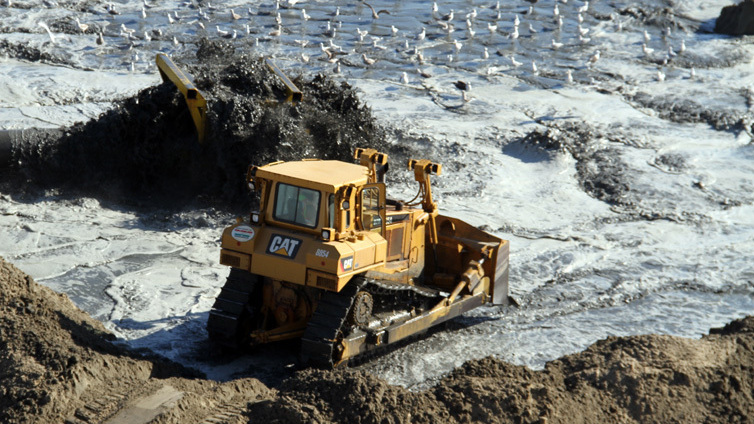 Ongoing beach nourishment, like this project in Viriginia Beach, has been the topic of debate. Some people say it's needed to protect beach communities; others decry the costs.

For a half-century, the U.S. Army Corps of Engineers has been in the beach business, dredging up new sand as shorelines wash away. Federal disaster aid for Superstorm Sandy could provide billions more for beach rebuilding, and that has revived an old debate: Is this an effective way to protect against storms, or a counterproductive waste of tax dollars?

On a recent blustery day at Virginia Beach, the latest beach nourishment project is in full swing. A bulldozer smooths out pyramids of sand, and on the horizon, a large, black hopper dredge appears with another load.

It has sucked up the sand like a giant vacuum cleaner, from five to 10 miles offshore, and is now pumping it into a large metal pipe that runs up onshore. The pipe feeds into a boxy yellow filter, from which a mud-gray mix of sand and water sprays out.

By late spring, Army Corps of Engineers Project Manager Jennifer Armstrong says, a total of 1.25 million cubic yards of sand will be spread along this strip, making the beach hundreds of feet wider.

"As wave energy comes in, it absorbs that energy," she says. "It's designed to be a sacrificial buffer."

Picking Up The Reconstruction Tab

The cost to federal taxpayers is about $9 million. But this is the 49th time this strip has been built up since 1951, mostly with federal money.

Armstrong says with its current long-term project, the Army Corps will do it again and again as needed.

"The thing that I try to stress to people is we're only about 11 years into this project," she says, "and already we've prevented $443 million in damages. It has already paid for itself and all planned renourishment cycles over the next four to three years."

That's the estimated storm damage not done to the strip of high-rise chain hotels that line the shore and that make up the heart of Virginia Beach's tourism economy.

The Inception Of The Program

"During the height of the storm," he says, "large segments of the seawall were completely blown out, exposing the hotels to direct wave attack."

That storm kicked off the Army Corps' replenishment program in earnest, all along the East Coast. Roehrs says beaches are just like roads or bridges — public infrastructure that needs routine repair. And that maintenance, he says, has helped prevent untold damage. He points at New Jersey after Sandy for an example.

"Township A had a protection plan in place, and Township B, right next door, didn't, and township B suffered tragically," he says. "It's better to pay for a little protection than a whole lot of cleanup."

Some coastal geologists aren't convinced, suggesting there were many factors that could have made a difference in how towns weathered Sandy. Congressional disaster aid allocates money to study what worked. But there is criticism, regardless.

"This is a particularly silly form of disaster relief," says Eli Lehrer of the libertarian R Street Institute. He's also co-founder of SmarterSafer, a Washington, D.C., coalition of environmental groups and budget watchdogs. 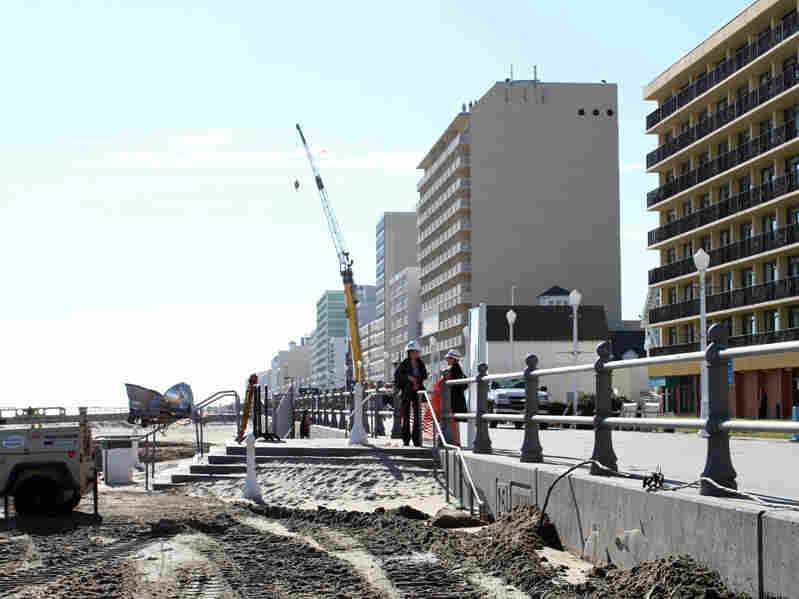 Some call beach refurbishment "welfare for the rich," and others say it's necessary for local communities. Pam Spaugy/U.S. Army hide caption 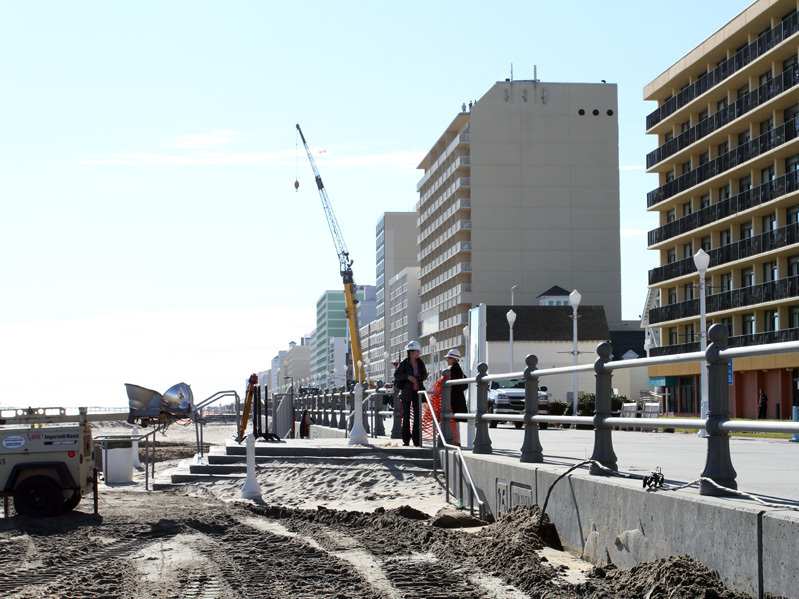 Some call beach refurbishment "welfare for the rich," and others say it's necessary for local communities.

"Beach renourishment creates a false sense of security that tends to induce development in the very areas where it's most likely to be destroyed by nature's worst," he says.

In other words, create a wide swath of sand, and people will build there — even if it would otherwise be deemed folly. Lehrer says replenishing remote barrier islands is the most egregious waste of taxpayer money. For a tourism-dependent place like Virginia Beach, he concedes it makes economic sense for that particular town.

Currently, the federal government pays 65 percent of beach nourishment projects, while local communities finance the rest. President Bill Clinton and President George W. Bush tried — and failed — to reduce the federal share. President Obama has tightened regulations for which projects qualify. But Congress approves the funding, and it turns out beach nourishment is a pretty popular program.

Is It Really Needed?

Howard Marlowe lobbies for more than a dozen beach communities, including residential areas in North Carolina.

"These are cottages, they're for rent, and we have so many congressional staff going there [for vacation], it always amazes me," he says.

Marlow has an answer ready for the question, "Why should taxpayers in Iowa or Nebraska subsidize this?"

"Because the taxpayers in Iowa and Nebraska are actually going to those beaches," he says.

Communities must offer public access to get federal funding for beach replenishment. Still, the program has been slammed as "welfare for the rich," since it pumps up the value of plenty of private beachfront homes. Marlowe says it may be viewed as unfair, but he doesn't think it is.

"We budget $2 billion a year in this country to fight wildfires, and that's not disaster, that is every year," he says. "And we don't fight wildfires for any reason other than to protect the homes that are anywhere nearby."

The Other Side Of The Debate

But since Superstorm Sandy, another critique has gained attention, one that makes this task of rebuilding constantly eroding beaches seem even more Sisyphean and costly.

"Everything we do should be done with the assumption that the sea level's rising, and another Sandy will come by in some number of years," Orrin Pilkey, professor emeritus at Duke University, says.

Pilkey has criticized federal beach nourishment for decades. And now, he says, studies show a warming planet is causing sea levels to rise even faster, especially in the mid-Atlantic. There's no avoiding it, he says.

"If I was king of New Jersey, for example, buildings that were within two blocks of the beach, I wouldn't replace them if they'd been destroyed," he says. "And I would try to move other buildings back from the beach." 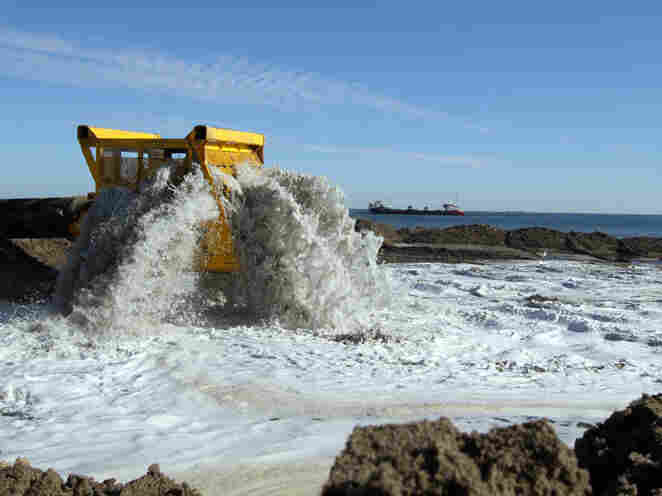 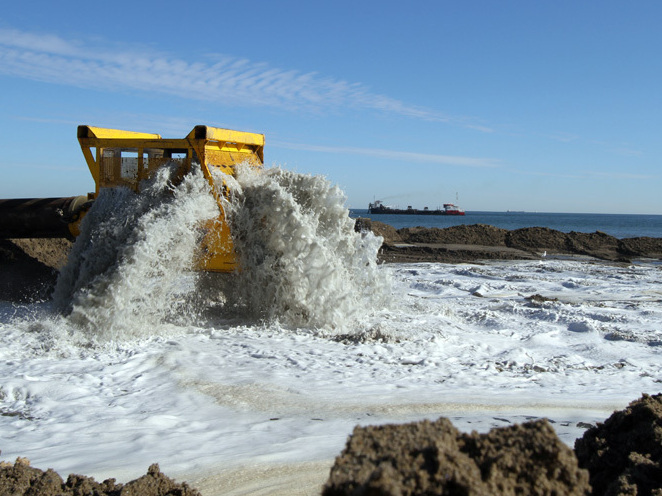 Pilkey senses more support for this approach since Sandy. But for public officials like Roehrs, in Virginia Beach, it's easier said than done.

"The population wants to live at the coast," Roehrs says. "It's been that way since recorded history."

Roehrs says the Army Corps of Engineers considers sea level rise when it reconstructs beaches. But he cautions against planning too far ahead.

"If you forecast out 150 years and believe that the sea's going to rise 6 feet," he says, "you can easily strangle any attempt to do anything about it, because it's just too large."

More sensible, he says, is an incremental approach, planning for 20 years at a time, then creating an assessment.

At Virginia Beach's tourist strip, no one seems to be thinking of retreat. Just like the beach, the line of hotels is in a state of ongoing renovation.

Roehrs says about a third are new or refurbished. As bulldozers smooth out sand, there's confidence that these high-rises will be safe, and profitable, for a good while to come.