Accessibility links
Study: Nearly Half In U.S. Lack Financial Safety Net In his inaugural address, President Obama envisioned a nation where even "the poorest child knows she has the same chance to succeed as anyone else." But a new report finds that 44 percent of Americans do not have the savings to cover basic expenses for three months if they lose their income. 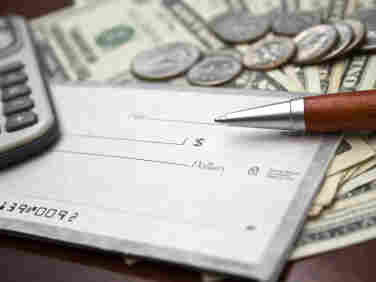 Nearly 44 percent of Americans don't have enough savings or other liquid assets to stay out of poverty for more than three months if they lose their income, according to the Corporation for Enterprise Development. Atanas Bezov/iStockphoto.com hide caption

In his inaugural address, President Obama talked about a country where even "a little girl born into the bleakest poverty knows that she has the same chance to succeed as anybody else." But in reality, that's not always the case. A new report finds that one of the biggest obstacles for many Americans is that they don't have the savings or assets they need to help them get ahead.

Nearly 44 percent of Americans don't have enough savings or other liquid assets to stay out of poverty for more than three months if they lose their income, according to Wednesday's report by the Corporation for Enterprise Development. Almost a third have no savings accounts at all.

The nonprofit tries to help low- and moderate-income families achieve the American dream. The group's president, Andrea Levere, says that's not easy when all your energy goes into paying the rent and buying food.

The group and others are pushing new efforts to encourage more people to save and to be smart about how they handle money.

Michelle Jones of Gaithersburg, Md., for example, says she lost everything when she got involved in drugs a decade ago. She is now trying to rebuild her life.

"It's hard because right now I have a job that does not have benefits and it's part time. And I'm making like $11 an hour," says Jones.

But even so — through a program called Maryland CASH — Jones has been having $200 a month withheld from her paycheck and automatically put into savings. And it's a good thing too, because in November she was in a car accident.

"I couldn't work, and my job doesn't pay me when I'm off and I had to use that money to pay my rent," says Jones.

It's just the kind of emergency that can send someone without a financial cushion tumbling into tough times.

"I noticed very early on that money is something that goes to the root of whatever issue is going on, whether it's a health issue [or] a criminal justice issue," says Robin McKinney, a former social worker who now runs Maryland CASH.

McKinney says low wages are clearly a problem but so too are some government rules. For example, the state of Maryland used to prohibit public assistance for those with more than $2,000 in assets. But many low-income families qualify for big lump-sum payments through the federal earned income tax credit program.

"Our average refund is about $2,200, so that's already over that $2,000 asset limit," McKinney says. "So if they didn't spend that money down immediately, they were at risk of losing their benefits. This is a huge disincentive to savings."

In Maryland, the asset limit has been abolished, and there are similar efforts in other states. Indeed, there's a lot of bipartisan agreement that getting people to save more is a good thing. Stuart Butler with the conservative Heritage Foundation says while problems can be found at all income levels, those at the lower end of the economic ladder are especially vulnerable to financial setbacks.

"It's almost a double whammy. They don't have a lot of assets, and then when they try to get credit in some ways, it's very expensive and it sucks them into a much worse economic situation over time, and that's really what we've got to try to break out of," says Butler.

Both he and McKinney say they're encouraged by a number of initiatives, especially something called prize-linked savings. These are offered by credit unions in Michigan and will be pretty soon in a few other states. The accounts reward savers with a chance to win a big monthly or yearly prize, just like the lottery.

"What it does is to convert the gambling instinct into a savings instinct," McKinney says.

It's an instinct he says needs to become much more widespread, if there's a chance of achieving the president's inaugural dream.