Accessibility links
Eerie Echoes From The First State Of The Union What were the issues George Washington raised in the State of the Union address 223 years ago? Some of the same ones you're likely to hear from President Obama on Tuesday night.

Eerie Echoes From The First State Of The Union

Eerie Echoes From The First State Of The Union 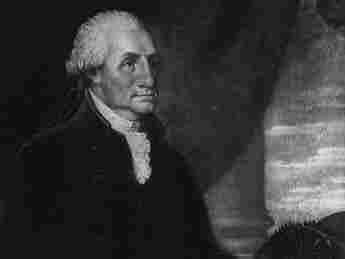 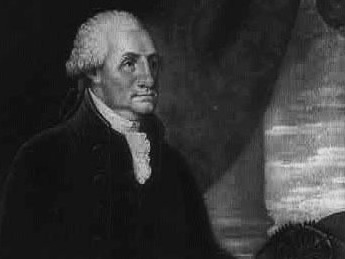 This print shows George Washington holding a proposed plan for the new capital city of Washington.

These are key issues facing President Obama as he delivers the first State of the Union address of his second term on Tuesday night, Feb. 12.

Surprisingly, these were also key issues facing President George Washington some 223 years ago, when he gave the very first state of the union speech.

It was January, 1790. Washington, the first president of the newly united states of America, offered up a PowerPoint-ish report to the combined houses of Congress at Federal Hall in New York City.

The mood of the country was cautious optimism, says Edward Lengel, editor-in-chief of the George Washington Papers at the University of Virginia. "Washington appeared steady at the helm, and government appeared to be working with reasonable efficiency."

There was uncertainty, however, and it was too early to tell whether the new form of government would endure. "There was serious Native American unrest on the frontier, and the French Revolution created a sense of instability overseas, and possible war," Lengel says. Still, "the country had entered a period of relative economic prosperity ... and the question remained: What to do next to ensure that prosperity continued?"

And, Lengel says, "there were early signs of division within the government."

'From Time To Time'

The Constitution requires that the president "shall from time to time give to the Congress information of the state of the union, and recommend to their consideration such measures as he shall judge necessary and expedient."

So Washington — who had only been in office for less than nine months — presented his First Annual Address, a four-page speech of 1,100 words or so. The whole thing could not have taken more than about 10 minutes to deliver, says Stuart Leibiger, a George Washington specialist at La Salle University. "Washington was not much of an orator, and so he literally read the speech."

In the address, the former military general acknowledged certain national problems, such as defending the new country, taking care of diplomats abroad, paying off the Revolutionary War debt and handling noncitizens.

Donna Hoffman, a political scientist at the University of Northern Iowa and co-author of Addressing the State of the Union: The Evolution and Impact of the President's Big Speech, says that Washington "generally sought to focus Congress' attention on various legislative matters, without offering specific recommendations — unlike what we typically see in today's speech."

Analyzed today against the backdrop of 21st century America, Washington's speech is still rousing, revolutionary and relevant. And full of surprising echoes of our own time. Here are a few:

* Be Armed. "A free people," Washington warned, "ought not only to be armed, but disciplined; to which end a uniform and well-digested plan is requisite; and their safety and interest require that they should promote such manufactories as tend to render them independent of others for essential, particularly military, supplies." Washington meant that the Congress needed to provide for national security, says Leibiger, "by enacting a tariff to promote industries vital to defense, and by creating a peacetime military establishment. Washington was trying to overcome traditional fears of standing armies during peacetime."

* Be Open. "Various considerations also render it expedient, that the terms on which foreigners may be admitted to the rights of Citizens should be speedily ascertained by a uniform rule of naturalization," Washington said. The United States, says Lengel, had to wrestle with "the meaning of citizenship in a post-colonial world. This meant the political and social integration — or exclusion where deemed necessary — in some form of German settlers, ex-Hessian soldiers, ex-Tories and British merchants, French and Spanish traders and the like."

* Be International. Washington recommended that Congress provide adequate funding for the country's foreign relations corps. "The interests of the United States," Washington said, "require that our intercourse with other nations should be facilitated by such provisions as will enable me to fulfill my duty in that respect in the manner which circumstances may render most conducive to the public good." In addition, he asked Congress to pay diplomats and to set aside enough money "for defraying the expenses incident to the conduct of foreign affairs."

* Be Fiscally Responsible. Praising Congress, Washington said, "I saw with peculiar pleasure at the close of the last session the resolution entered into by you expressive of your opinion that an adequate provision for the support of the public credit is a matter of high importance to the national honor and prosperity. In this sentiment I entirely concur." The speech calls on Congress to address the national debt — created by financing the Revolutionary War — so that the nation's credit rating would not suffer, Leibiger explains.

The 1790 speech also suggests that Congress develop the transportation infrastructure and provide for education — two more issues relevant to then and now, Leibiger says.

Bonus: Be Cool. Working to solve the national problems, Washington also reminded Congress, calls for "the cool and deliberate exertion of your patriotism, firmness and wisdom."

President Obama could do worse than to echo those words — and tell Congress to stay cool — when he speaks Tuesday night.