Accessibility links
Movie Review - 'Bullet To The Head' - Bubblegum Action, Cheerfully Brain-Free Adapted from a French graphic novel and outfitted with an ethnically diverse cast, this New Orleans-set crime thriller centers on a hit man (Sylvester Stallone) who finds himself in an uneasy alliance with a detective (Sung Kang).

'Bullet To The Head': No-Brainer Bubblegum

'Bullet To The Head': No-Brainer Bubblegum 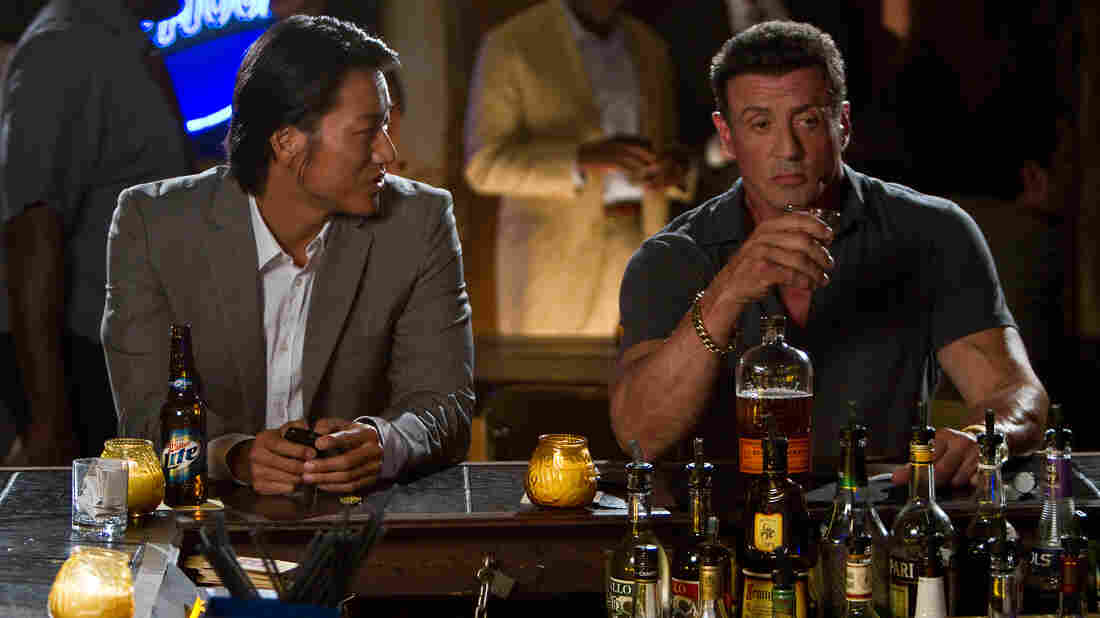 Sung Kang plays a D.C. cop at large in New Orleans, where he finds himself in an uneasy alliance with hit man Sylvester Stallone in the blues-rock driven crime drama Bullet to the Head. Frank Masi/Warner Bros. Pictures hide caption

Bullet To The Head

Adapted from a French graphic novel and outfitted with an ethnically diverse cast, Bullet to the Head is an artifact of a newly internationalized Hollywood. But that doesn't mean it feels especially new.

In fact, this Sylvester Stallone vehicle regularly overlaps the season's other cops-and-mobsters retreads. It features a creaky veteran actor — as do The Last Stand and Stand Up Guys. It turns on a corrupt municipal real-estate deal much like the one in Broken City. Its combatants shrug off punishing violence, the way they do in Parker. And the thing's set in New Orleans, which these days gets more B-movie screen time than Santa Monica.

'I Could Kill You With This Piece of Apple'

Bullet to the Head was directed by onetime master Walter Hill, who did The Warriors and 48 Hrs but hasn't made a movie anyone noticed since 1996's Last Man Standing. From minute to minute, his work is effective. The many action scenes are well-staged, without the frantic over-cutting that's fashionable these days. And the dialogue, which includes some laconic voice-over, is suitably cynical and grimly witty. "Sometimes you have to abandon your principles and do what's right," muses the underworld-weary narrator.

The plot fails to deliver a single surprise, however, and the characterizations are thin even by the standards of the tough-guy genre. Perhaps because the script is overly faithful to its source, Alexis "Matz" Nolent's Du plomb dans la tete, the movie has too many villains, most of whom are dispatched almost as soon as they're introduced. 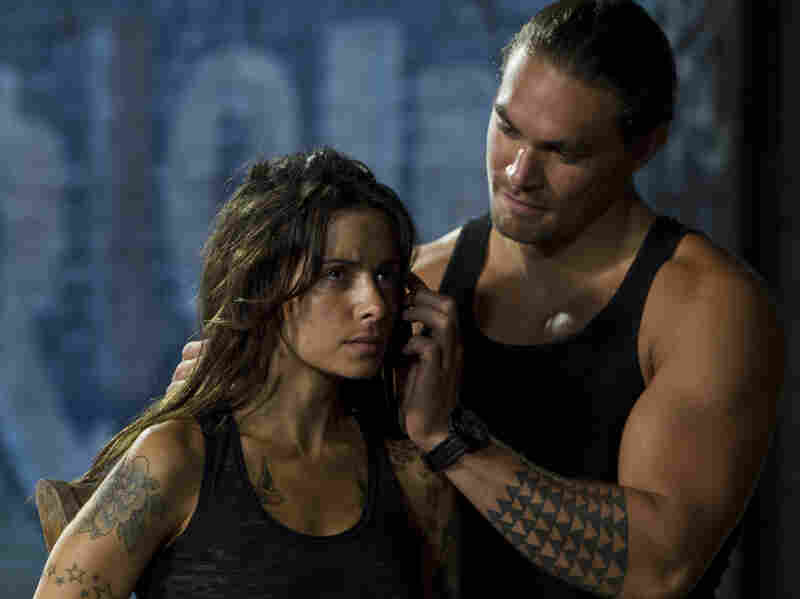 Sarah Shahi's tattoo artist — who has ties to both Kang and Stallone's characters — falls into the clutches of a mob enforcer (Jason Momoa). Frank Masi/Warner Bros. Pictures hide caption 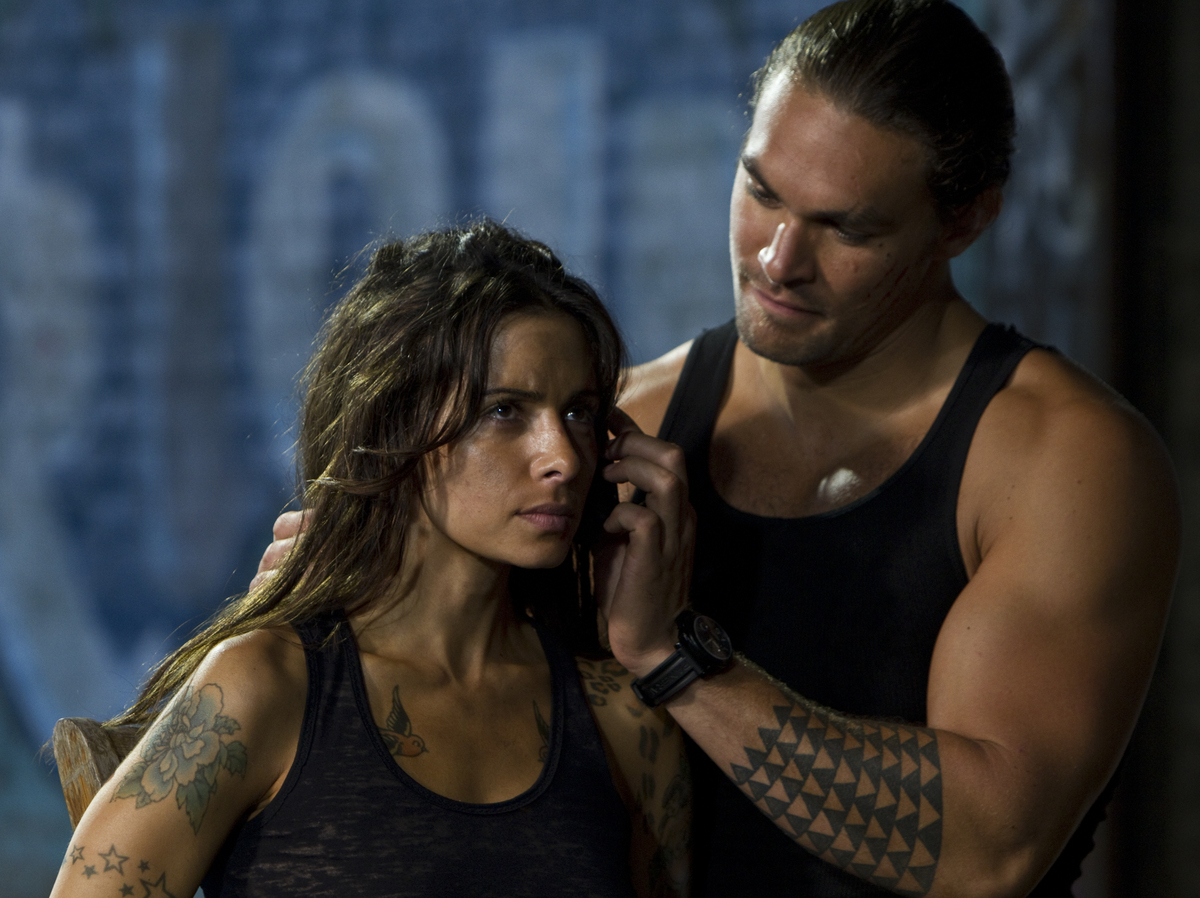 Sarah Shahi's tattoo artist — who has ties to both Kang and Stallone's characters — falls into the clutches of a mob enforcer (Jason Momoa).

Our antihero is Jimmy Bobo (Stallone), a hit man with a code of ethics: "no women, no children." In the opening scene, Jimmy and his partner — you needn't waste time learning that guy's name — crash into a hotel room and kill their intended victim. But Jimmy spares the Russian hooker who's in the shower, revealing herself in the first of several gratuitous nude scenes.

Jimmy is soon partnerless and realizes he has been set up. Enter Taylor Kwon (the Fast and Furious series' Sung Kang), a Korean-American detective from Washington, D.C., on assignment in the Big Easy. (Don't think too hard about that one.) Jimmy and Taylor's interests sort of coincide, so they become allies of a sort, even though Jimmy hates cops, and Taylor — not unreasonably — hates assassins.

Thanks to a steady flow of data from Taylor's Blackberry, the duo picks up the scent of Marcus Baptiste (Christian Slater), a Garden District sleaze who throws costume parties where the preferred outfit for young women is nothing. (At least the movie acknowledges that one of the many babes it undresses might be somebody's daughter.)

An even bigger target is Robert Nkomo Morel (British-Nigerian actor Adewale Akinnuoye-Agbaje), an exiled West African gangster turned scariest monster of all: condo developer. But the featured attraction is Keegan, a sociopathic enforcer played by Jason Momoa (the Hawaiian sirloin burger who succeeded Arnold Schwarzenegger as Conan the Barbarian).

Keegan makes off with Jimmy's favorite tattoo artist (Iranian-Mexican-American actress Sarah Shahi). She plucked a bullet from Taylor's shoulder, so the cop is kind of sweet on her, too. The kidnapping sets up a dynamic final confrontation between the half-good guys and the baddest of the bad guys, which proceeds (mostly) without bullets.

Characteristically, Hill goes for grimy locations and drives the action with a blues-rock score. Such touches aside, though, Bullet to the Head is less authentic Delta blues than gore-spattered bubblegum.