Accessibility links
Movie Review - 'Stand Up Guys' - A Violent Old-Folks Flop An awkward, uneven addition to the "old guys doing stuff" subgenre, Stand Up Guys wastes a veteran cast and a passable premise in one night of ill-calibrated comic hell-raising. 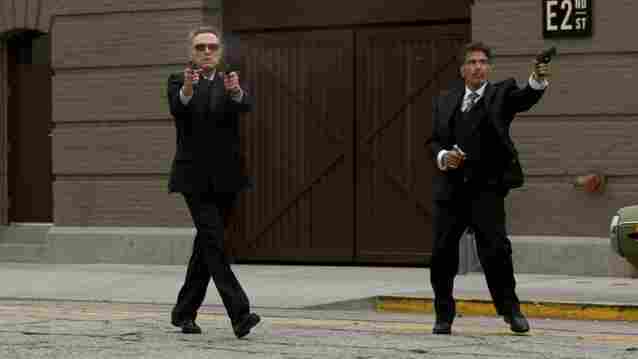 Doc (Christopher Walken) and Val (Al Pacino) are old friends and ex-cons who go on one last rampage in the crime comedy Stand Up Guys. Lionsgate hide caption

Intended as a victory lap for three great stars of advancing age, Stand Up Guys is another entry in the "old folks doing stuff" subgenre, which offers comic affirmation that life is not strictly for the young.

This is the subgenre that had a retirement-home population necking like teenagers in Cocoon, Jack Nicholson and Morgan Freeman jumping out of an airplane in The Bucket List, and ancient astronauts repairing an old Soviet satellite in Space Cowboys. These films offer the cheering fantasy of revitalization, plus the comedy of veteran actors — some marquee attractions in their day — not acting their age.

Yet that fantasy curdles badly in Stand Up Guys, in large part because the funny business isn't as innocuous as retirees cutting a rug. The lovable old-timers here, played by Al Pacino and Christopher Walken, are contract killers, and their one-crazy-night misadventures detour into thieving, maiming, murder and no fewer than three trips to the local brothel. (Leading to no fewer than three Viagra jokes, too, which is three above the legal limit.)

It would take a deft touch to frame their transgressions as an essentially harmless final go-around for a couple of old professionals. But actor-turned-director Fisher Stevens gravely misjudges the tone — when he isn't trying to get too cute about everything, he slathers his characters in unearned sentimentality.

The workable premise has Val (Pacino) getting out of prison after serving 28 years for accidentally killing the boss's son. Though Val has taken the time without complaint, the boss (played by Mark Margolis, best known as the fearsome Tio Salamanca on Breaking Bad) wants him dead within 24 hours of his release. 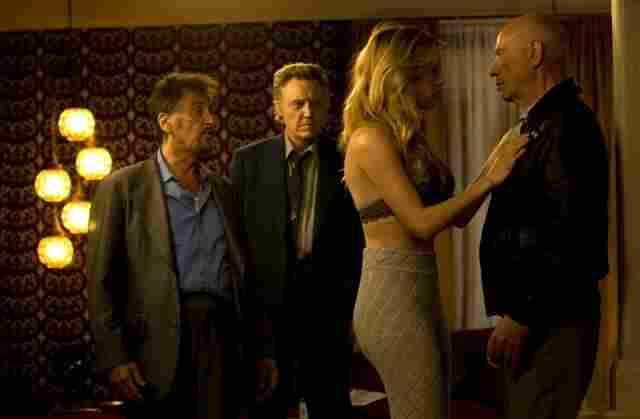 Val and Doc's driver, Hirsch (Alan Arkin), joins them on an outing to the local bordello for some quality time with one of the women (Lucy Punch). Lionsgate hide caption 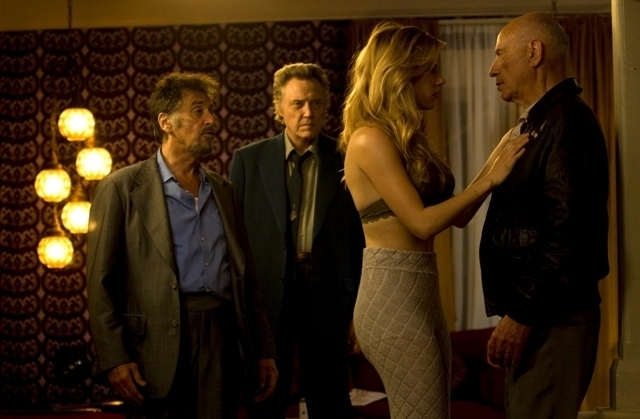 Val and Doc's driver, Hirsch (Alan Arkin), joins them on an outing to the local bordello for some quality time with one of the women (Lucy Punch).

For this task, he hires Val's best buddy and former partner in crime, Doc (Walken), who has the decency to show his friend a last night on the town before pulling the trigger. After a nice breakfast and a couple of trips to the bawdy house, Val and Doc steal a sleek Dodge Challenger and pick up their former getaway driver, Hirsch (Alan Arkin), to peel off to wherever the evening takes them.

Some of the jokes in Stand Up Guys are barely jokes — there's a whole sequence devoted to the supposed irony of the mild-mannered Hirsch's talent for pleasuring two young prostitutes at once — and others are weirdly distasteful. One episode has the trio discovering a naked woman (Vanessa Ferlito) in the trunk of the car, who has obviously been sexually assaulted, and all the film can think to do is have Val and Doc knock around the perpetrators as the woman follows up with a baseball bat. It's all treated with a smug lightness that plays entirely at odds with what's happening onscreen. A pair of career contract killers would be capable of such dirty business, but Fisher and his screenwriter, Noah Haidle, refuse to treat it with any gravity.

At the same time, Stand Up Guys gets awfully sticky as dusk turns to dawn and Val's time grows short. Stevens wants to honor the living legends who have miraculously agreed to appear in his movie, but after spending a full hour treating their characters like cartoons, the about-face into heartfelt slop lacks the necessary gravitas.

Not that these old pros don't give it their best: Walken, in particular, dials back his natural flamboyance to play Doc as a weary, lonely soul searching for some tiny sliver of redemption. The movie isn't worthy of him.