Accessibility links
As U.S. Consumes Less Cocaine, Brazil Uses More The cocaine market in the Americas is changing among both producers and consumers. The old model was Colombian cocaine going to the U.S. Now, it's increasingly common for Bolivian cocaine to be headed to Brazil. 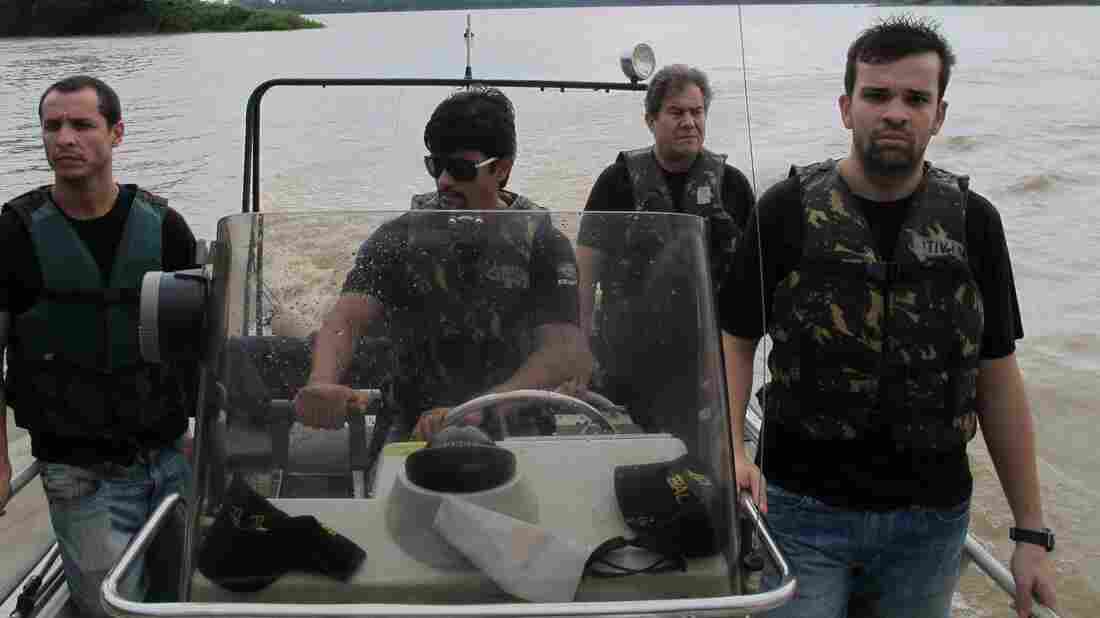 Brazilian federal police patrol the Mamore River, which separates Brazil from Bolivia. The river is used by traffickers to ferry cocaine from Bolivia into Brazil, where cocaine consumption is rising rapidly. Juan Forero/Getty Images hide caption 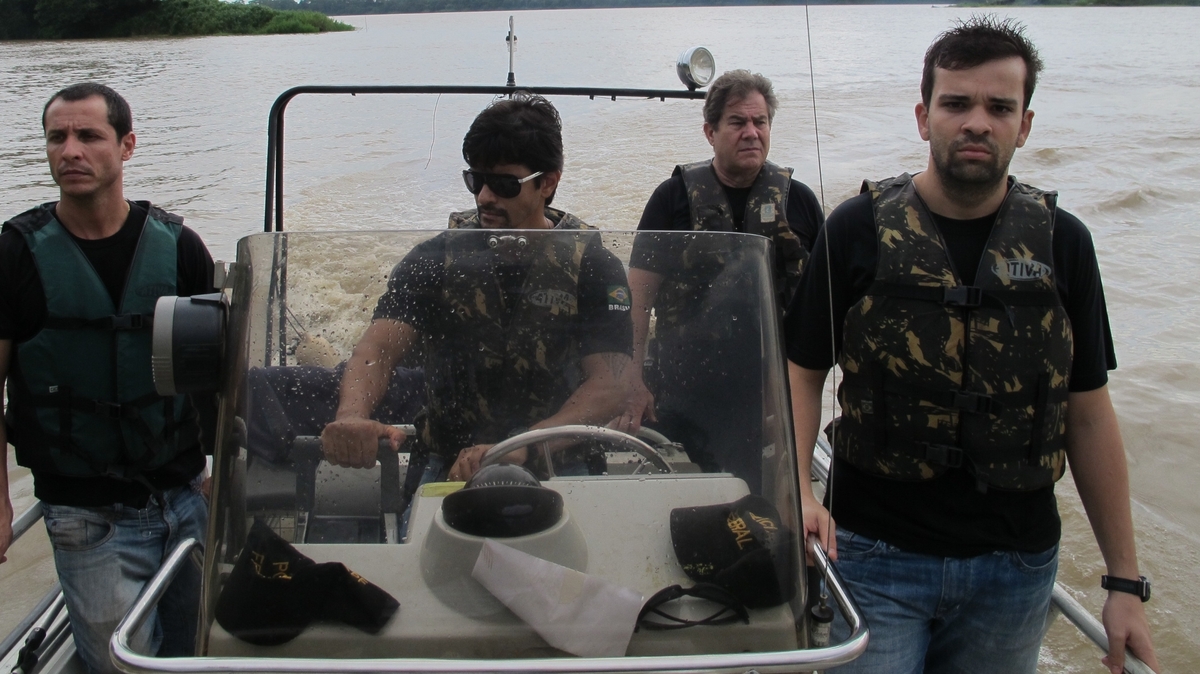 Brazilian federal police patrol the Mamore River, which separates Brazil from Bolivia. The river is used by traffickers to ferry cocaine from Bolivia into Brazil, where cocaine consumption is rising rapidly.

As cocaine consumption falls in the United States, South American drug traffickers have begun to pioneer a new soft target for their product: big and increasingly affluent Brazil.

And the source of the cocaine is increasingly Bolivia, a landlocked country that shares a 2,100-mile border with Brazil.

As Brazilian police officers and border agents can attest, the drug often finds its way to Brazil by crossing the Mamore River, which separates the state of Rondonia from Bolivia in the heart of South America.

It is not an easy border to patrol. Much of it is porous jungle or river. It is also a big border, bigger than the U.S.-Mexico line that has caused so much trouble for both the Obama administration and Mexico's government.

Worse still is that Bolivia, along with Peru and Colombia, are the three biggest cocaine-producing countries — and Brazil shares 5,000 miles of frontier with them. 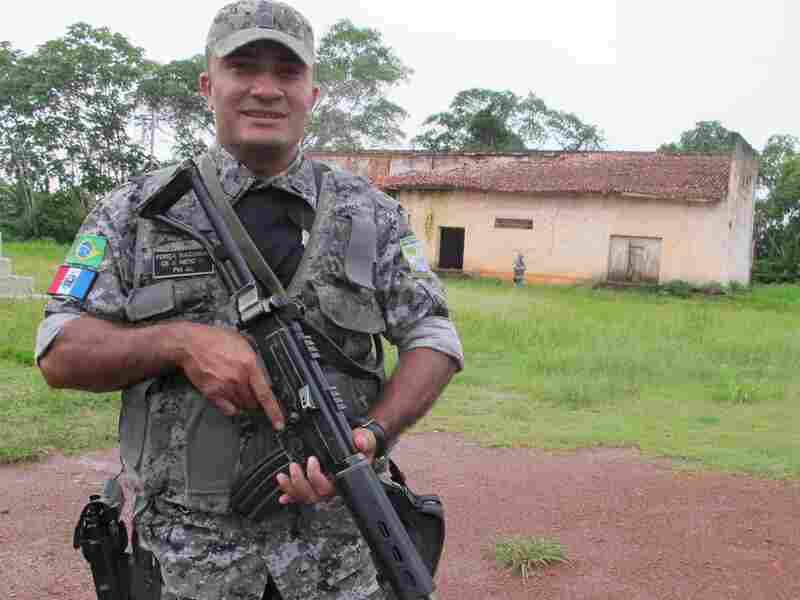 An agent of Brazil's Forca Nacional, an agency made up of military policemen, stands guard in a largely abandoned border hamlet that is used by drug traffickers to ferry cocaine from neighboring Bolivia. Juan Forero/NPR hide caption

An agent of Brazil's Forca Nacional, an agency made up of military policemen, stands guard in a largely abandoned border hamlet that is used by drug traffickers to ferry cocaine from neighboring Bolivia.

A perfect route for the transport of cocaine is the Mamore River, which meanders northward from Bolivia into the heart of Brazil's Amazon. So say the Brazilian cops who use a speedboat to patrol the wide, slow-moving Mamore near the Brazilian border town of Guajara-Mirim.

"Here we patrol at dawn and at night, looking to ambush the boats that cross with drugs," says Alexandre Nascimento, a federal police agent who piloted the boat. "But it's difficult and dangerous, and you have to have patience."

The agents also say they have to have a degree of luck, to decipher which of the countless small boats that cross the river from Bolivia are carrying drugs.

Most don't stop at the major border crossings, but rather find their way along narrow channels and drop off their goods at isolated ports.

"There are many ports," says Alexandre Barbosa, another federal agent. "Every 100 meters or sometimes less, you see a port. So you can move from one port to the other very fast."

The reasons are simple: Brazil, long the world's No. 2 consumer of cocaine after the United States, is seeing consumption rise fast. And Bolivia is responding to the demand, increasing its production of cocaine in recent years, according to U.N. and U.S. data.

"You've seen a shift where the drug traffickers are looking for a new market, new and emerging markets," says Bo Mathiasen, a senior U.N. drug official who tracks the cocaine trade across the continent. "And so the traffickers have been focusing on trying to ship more cocaine over towards Brazil, to Argentina and down to Chile."

It is Brazil, though, that is the big prize out of the many countries that have seen a spike in cocaine use in recent years. Brazil has lifted 30 million people into the middle class in recent years. For traffickers, that's particularly alluring, Mathiasen says.

"Brazil is in a way victim of its own success," he says. "Clearly, the economic success and the rising purchasing power and the growth of the economy turned it more attractive also for drug trafficking."

The turn toward Brazil has come as cocaine use in the United States has fallen by an estimated two-thirds over the past 30 years, according to the United Nations 2012 World Drug Report, which says the trend has been particularly notable since 2006.

Meanwhile, Colombia, which has historically supplied cocaine to the U.S., has seen the amount of land dedicated to drug crops reduced by half since 2001.
Cocaine production has also fallen steeply.

Increased Production In Peru And Bolivia

Peru and Bolivia have picked up the slack, with the cocaine from Bolivia proving to be the biggest challenge, according to Brazilian police.

"We see this as a problem of security and, at times, a problem of national defense," says Regina Miki, national secretary of public security at Brazil's Ministry of Justice.

Brazilian President Dilma Rousseff's government has since 2011 moved to shore up border security by deploying thousands of troops and assigning more and better equipped federal police agents to the border.

There are also plans for a fleet of unmanned aerial drones to patrol the most remote sectors. In a recent hearing in the capital, Brasilia, Justice Minister Jose Eduardo Cardozo said Brazil moved fast and aggressively.

"It's impossible to have a border that's invulnerable, because no country in the world has that," he said. "But our frontiers are much better controlled than in the past."

But out on Brazil's frontier with Bolivia, the Mamore River, it's clear how difficult the challenge is for a group of 35 federal agents assigned to patrol just one sector.

On a recent day, heavy rains fell and the Mamore and other rivers became swollen. Meanwhile, the small dugout canoes from Bolivia kept coming, loaded with provisions and suitcases, boxes and equipment.

In their speedboat, the federal officers dashed from one side of the Mamore to the other, trying to decide which boats to stop and search. With the river running high, they also had another problem to worry about: small creeks that had been made navigable by the constant rainfall.

"Look, even here, in front of us, you can see a canal," says Allan Oliveira, one of the agents. "You can go in with the small boats traffickers use to hide from the police."