Accessibility links
How The Glock Became America's Weapon Of Choice In his book Glock: The Rise of America's Gun, Paul Barrett traces how the sleek, high-capacity Austrian weapon found its way into Hollywood films and rap lyrics, not to mention two-thirds of all U.S. police departments. 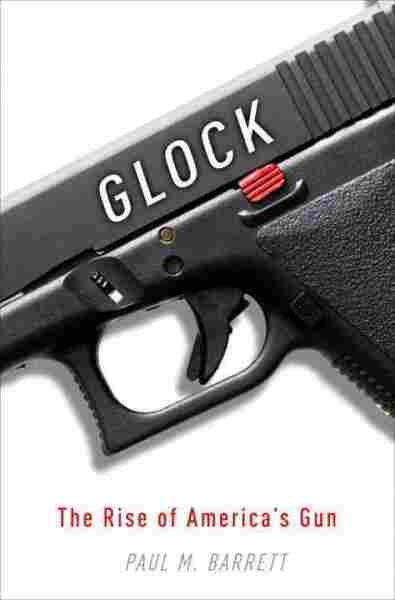 The Rise of America's Gun

This interview was originally broadcast on January 24, 2012.

Today the Glock pistol has become the gun of choice for both criminals and law enforcement in the United States.

In his book Glock: The Rise of America's Gun, which came out in paperback in January, Paul Barrett traces how the sleek, high-capacity Austrian weapon found its way into Hollywood films and rap lyrics, not to mention two-thirds of all U.S. police departments.

The Glock was created in 1982 by curtain-rod manufacturer Gaston Glock. Glock didn't like the handguns available on the market and decided to manufacture a new gun from scratch. Before starting, he asked gun experts in his native Austria what could be done to improve a handgun for the modern era.

"They said, 'A gun with much larger ammunition capacity, a gun that is much more durable and reliable ... [and] the gun should be easy to fire [and] easy to learn how to use,'" Barrett tells Fresh Air's Terry Gross. "He integrated all of those elements into the Glock, and that's how he won his original contract with the Austrian army."

The original Glock 17, the model adopted by the Austrian army, contained only 36 parts and could hold 17 bullets in its magazine. It didn't have an external safety like other semiautomatic handguns. It also didn't have a decocking mechanism. The result? A lightweight, interchangeable model that could be dropped, submerged and subjected to temperature extremes — and still accurately fire.

In 1988, the Glock made its way to the United States. It was perfect timing, coinciding with the rise of the American drug trade, when many cops were feeling outmanned by gangs on the street. The Glock's large capacity and light body gave it advantages over other guns.

"Police departments were amazed when they took their officers out to the range and found out not only could they learn to use the Glock pretty quickly, but the Glock also made them more accurate as marksmen," he says. "And that's in part because it has a very light, very steady trigger pull. ... Critics of the guns say the trigger pull is so light that it makes accidental discharges so likely. But the Glock always has had that dual nature to it — the advantages can be reframed as disadvantages."

One early advantage for police departments, says Barrett, was that Glock gave them large discounts when purchasing the gun for their departments.

"This was smart, because the point was to get the police departments to adopt the gun, and that would give the gun credibility in the much larger, much more lucrative civilian market, where you can charge full price and get your full profit margin," says Barrett. "So this was ... a very crafty strategy."

Another strategy, says Barrett, was to get the Glock screen time in Hollywood. In 1990, the Glock began to appear in the hands of police officers in Law and Order and other police procedural shows. It was also used by Bruce Willis in the movie Die Hard 2. Willis' character gave a long soliloquy touting the advantages of using a Glock.

Paul Barrett is an editor and senior feature writer at Bloomberg Businessweek and an adjunct professor at New York University Law School.

"[He] introduced the gun as a character to people who don't know anything about guns," says Barrett.

That publicity helped the Glock, as did its frequent mention in rap lyrics.

"The Glock was adopted early on by some of the biggest names — Tupac, Dr. Dre. As soon as it appeared here, they began to embrace it for its dark, futuristic side," he says. "The fact that it looked tough, [had a] large magazine capacity, and, not incidentally, the fact that it rhymed so well with words you might want to use in rap lyrics. Within the space of a few years, you not only had the Glock showing up in lyrics — you had song titles with the name in it and people changing their stage names to incorporate Glock into them."

In 1991, the first Glock shooting spree took place in Texas. Twenty people were killed. Hours after the shooting, members of Congress were debating whether guns like the Glock should be restricted.

"It took awhile, but by 1994, a bill was passed — this is what we remember as the Assault Weapons Bill — and was signed into law by President Clinton," says Barrett. "It had a variety of restrictions. One of them was limiting the pistol magazine capacity to 10 rounds."

The legislation, which expired in 2004, was initially seen as a terrible blow to the Glock. But the company quickly found a way to use the ban on high-capacity magazines to their advantage, he says.

"Glock had seen this bill coming for years and had been running the factory nonstop — three shifts a day, seven days a week — building up the large-capacity firearms and the large-capacity magazines," he says. "When the law was enacted, it allowed for a loophole that grandfathered in pre-existing equipment before the ban went into effect. [And] Glock had this huge stockpile of the very equipment that many gun owners wanted to get because it was banned — and the value of that equipment skyrocketed."

"Police departments were implicated in the proliferation of handguns all across the country," Barrett says, a fact that came to haunt the municipalities that, a decade later, tried suing the gun industry for flooding the streets with guns.

"This process of always finding the exceptions, finding ways around efforts to restrict the Glock became a trademark for the company," he says. "Right from the start, it helped the company, and it continue[s] on through its entire history."

Giffords: 'We Must Do Something!' About Gun Violence

On selling the Glock to U.S. law enforcement

"[Glock] was smart enough to hire a genius salesman. ... This man Karl Walter was really a guru in figuring out how to appeal to the police — whether that meant offering them extremely attractive financial terms or hosting police procurement officers at [a famous strip club] in Atlanta. This was a guy who could make a deal with anybody and figure out how to sell the Glock."

On an article in Soldier of Fortune magazine touting the Glock's body, which was made out of plastic

"[The writer] said, 'I was skeptical, too. I went over to Austria. I tried this gun. People, you've got to try it, too.' This was a huge door-opener for Glock. The focus on plastic soon developed into a controversy that was also a selling point because the gun control advocates [said], 'Because the gun is plastic, it'll become a terrorist tool. You'll be able to sneak it into airports, past the metal detectors.' This created a genuine controversy. ... Suddenly people were talking about the Glock before there were even more than a handful of guns in this country. This kind of attention is priceless. ... And then it turned out that the allegations weren't true, that you could see a Glock on an airport X-ray machine because a big piece of industrial-shaped plastic shaped like a gun looks like a gun."

"It's extremely similar to the way cars are sold, by means of sex and models and lots of other products. In the same way you have models at trade shows of all sorts, you certainly have them at gun trade shows. The appeal is just as obvious as it might seem. Guns are to some people an expression of virility. ... A buxom, scantily clad woman appeals to some customers."

I think it's very fair to say that the gun control debate has really been won for the moment by the NRA and by the industry that it cooperates with, and by those people who are in favor of widespread civilian ownership of guns.

"No new federal gun control legislation was passed in the wake of [Columbine and other school shootings], which is in some ways more remarkable that in the wake of Virginia Tech and in the wake of Tuscon, we have similarly seen no new efforts to restrict the legal sale or ownership of guns. In fact, it's quite to the contrary. Over that time, gun laws in the United States are getting looser, not tighter. It is easier to carry a gun in many states. It is easier to get gun permits. And we have now had a Democratic president for three years, and he's said barely a word about gun control one way or the other. I think it's very fair to say that the gun control debate has really been won for the moment by the NRA and by the industry that it cooperates with, and by those people who are in favor of widespread civilian ownership of guns."

"People who don't own guns really need to think about this: It's just darn fun to fire a gun. It's interesting. It requires a lot of attention. It's competitive. And it's just as people say — it's a real feeling of power to handle a firearm. That appeal is, in my view, undeniable and part of the reason that guns symbolize individualism, self-sufficiency to such a large portion of the population. I felt it myself."

Read an excerpt of Glock