Accessibility links
Ed Koch Dies; Outspoken Mayor Brought N.Y. Back From The Brink New York was practically falling apart in 1977 when Koch first ran for mayor, but he created a feeling the city could come back. His larger-than-life personality was well-suited to the nation's biggest city but could also get him in trouble. A spokesman says Koch died early Friday. He was 88. 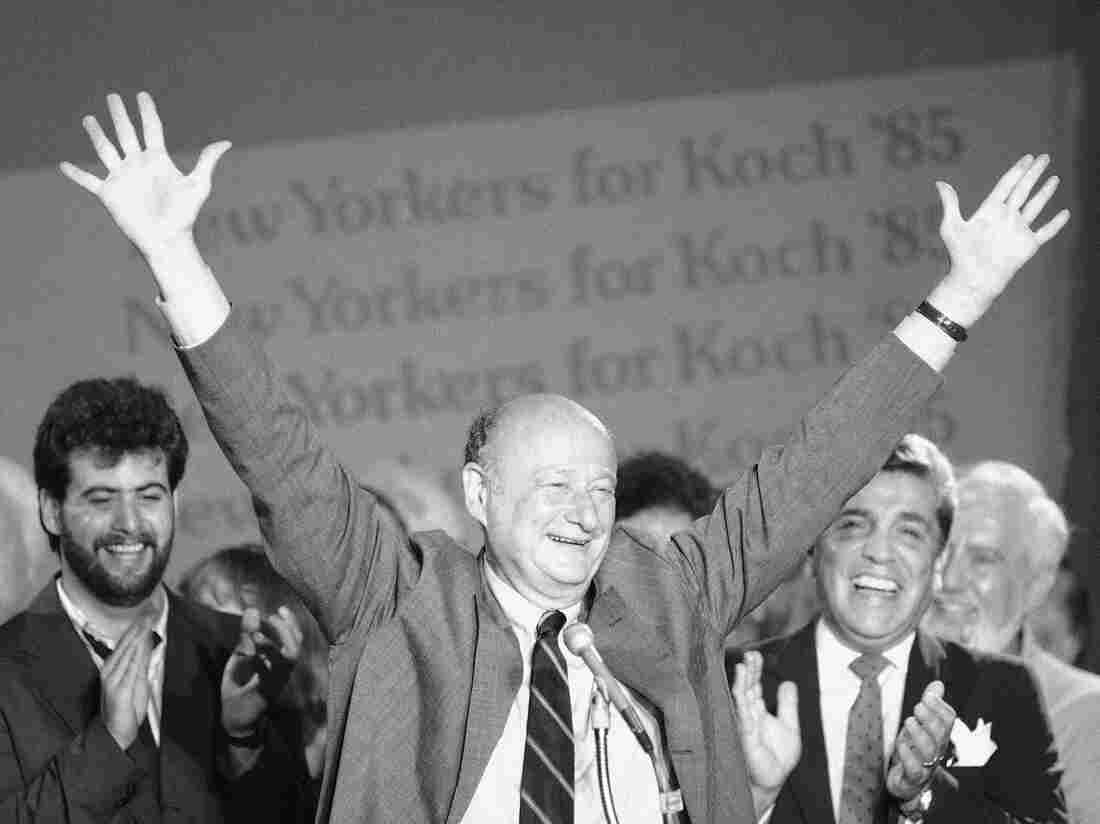 New York Mayor Ed Koch raises his arms in victory on Sept. 11, 1985, after winning the Democratic primary in his bid for a third four-year term. Mario Suriani/AP hide caption 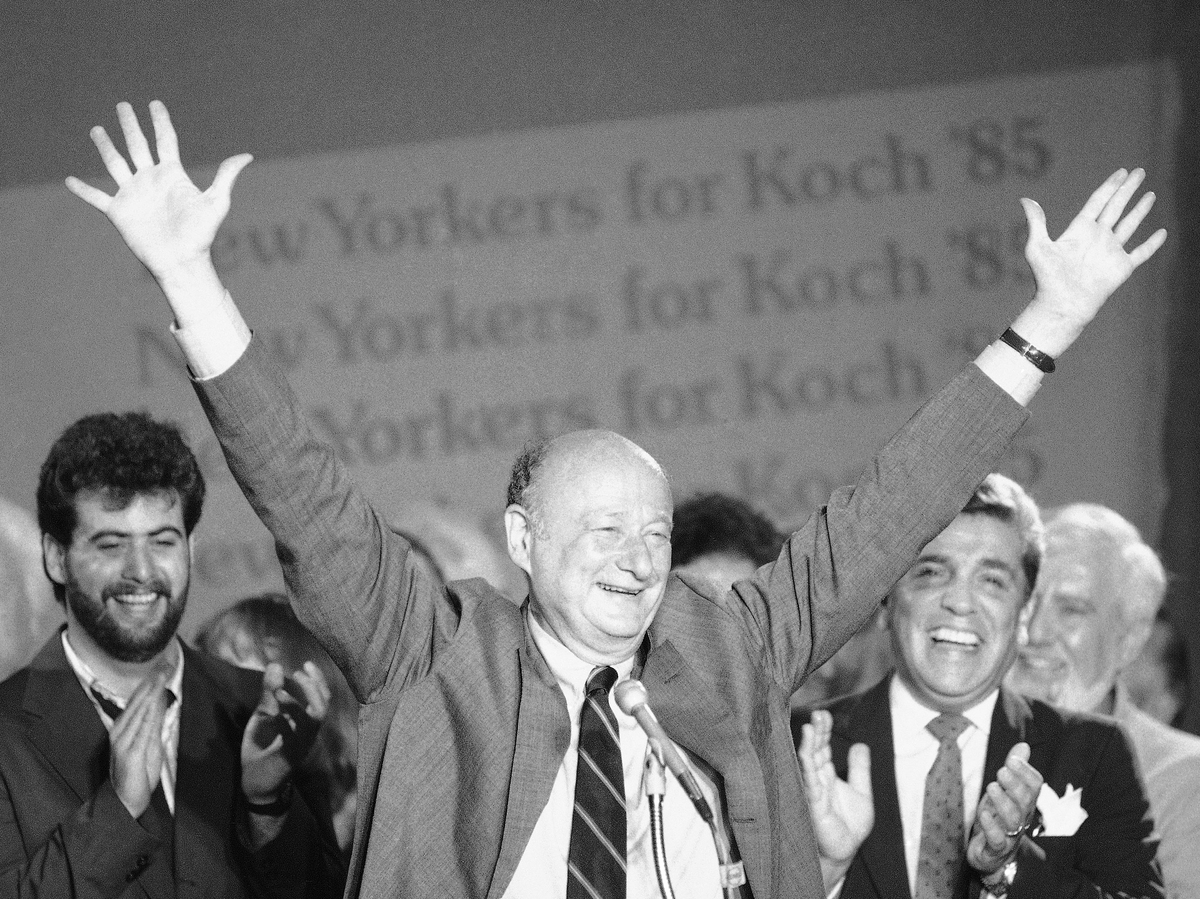 New York Mayor Ed Koch raises his arms in victory on Sept. 11, 1985, after winning the Democratic primary in his bid for a third four-year term.

Former New York City Mayor Ed Koch, whose larger-than-life personality was well-suited to the nation's biggest city but could also get him in trouble, has died. He was 88.

Koch was famous for asking his constituents this question: "Hey! How'm I doing?" He insisted this was more than just shtick. He told NPR in 1981 that he really wanted to know.

"Some people have said that's a mark of insecurity. Gee, I have to be patted on the back, how'm I doing," he said. "I want you to think about this: Do you know people in public life who are sufficiently secure to ask people to rate them?"

Insecurity did not seem to be a problem for Koch. When he ran first for mayor, New York was practically falling apart. The city was still reeling from the financial crisis of the mid-1970s and the looting that accompanied a major blackout in the summer of 1977.

Soffer, who wrote a biography called Ed Koch and the Rebuilding of New York, says Koch managed to balance the city's budget, sometimes at the expense of low-income and minority communities. He says the Koch administration was focused on keeping middle-class families and white-collar jobs from leaving New York.

"He was a very, very pro-business mayor, partly because he saw tax dollars for the city government that were badly needed in economic growth," Soffer says. "He contributed a tremendous amount to building the city we have today, for better or worse."

Edward Irving Koch was born in the Bronx and raised in Newark, N.J. After serving in World War II, he settled in New York. He represented the city in Congress for five terms before running for mayor. Koch never married. He refused to answer questions about his personal life, but reporters could always count on him for a quote, or a joke. As he explained to an interviewer from Reason TV in 2011, he saw it as part of the job.

"You had to get people to follow you. I'm I think a reticent personality, quite private," he said. "But I realized that would not do the job, and so I became more, far more onstage." 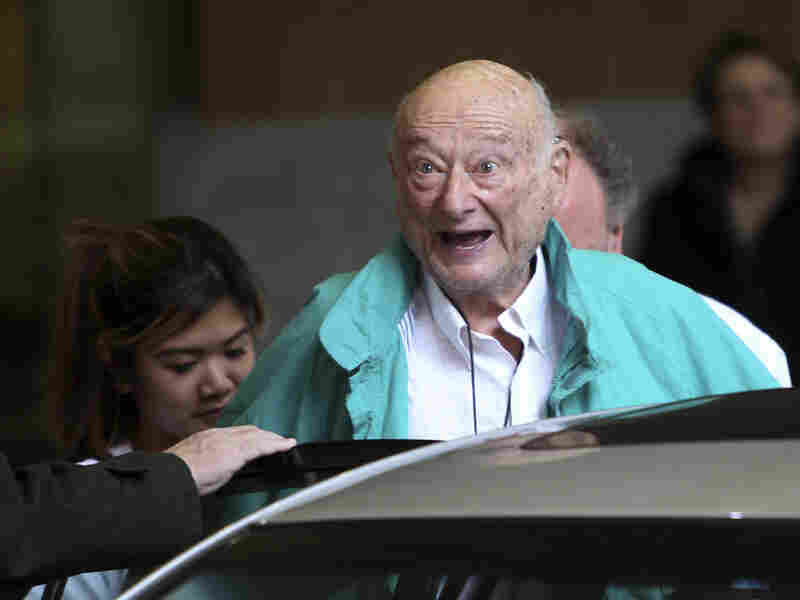 New York City Mayor Ed Koch says goodbye to reporters as he gets in his car after being released from a New York hospital on Dec. 12, 2012. Seth Wenig/AP hide caption 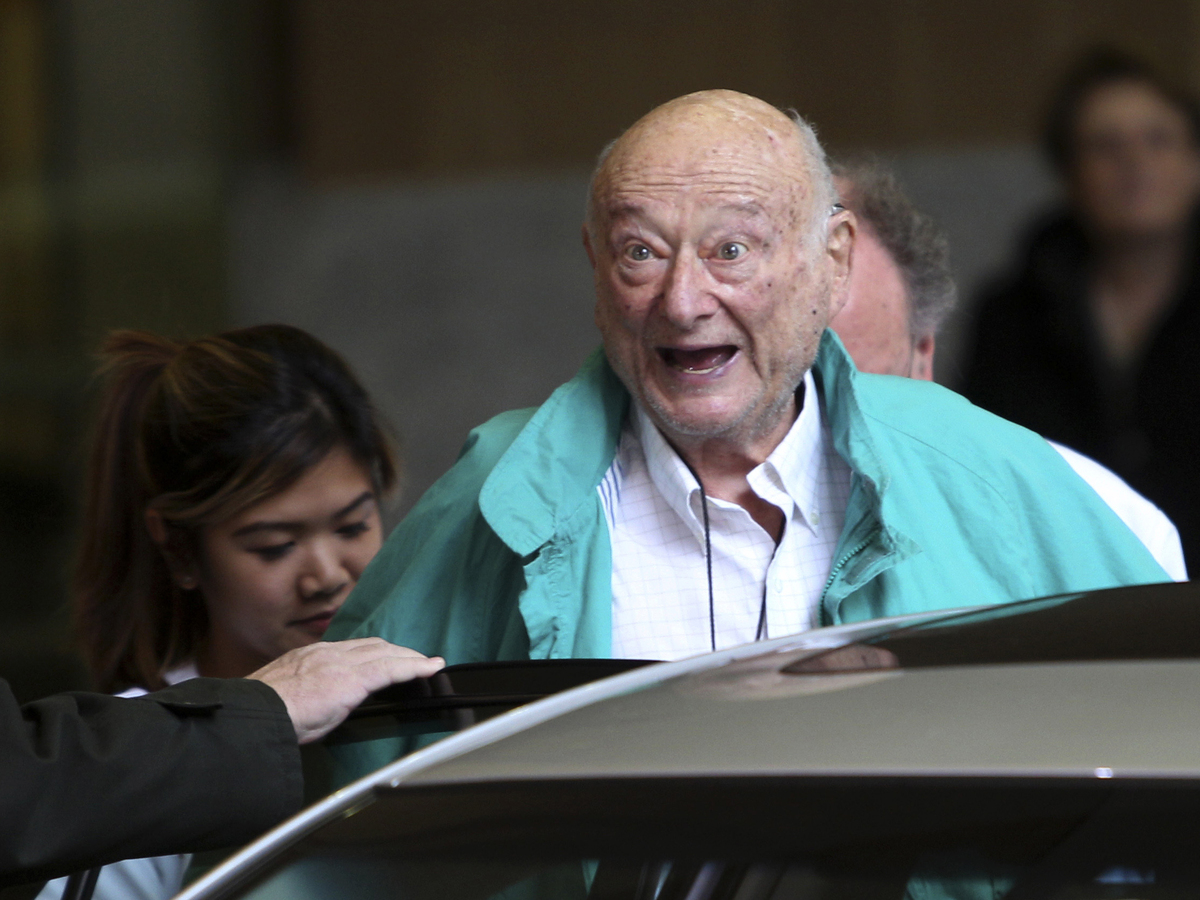 New York City Mayor Ed Koch says goodbye to reporters as he gets in his car after being released from a New York hospital on Dec. 12, 2012.

Koch even landed a cameo appearance as himself in The Muppets Take Manhattan. He was free with his opinions too — maybe too free, says Soffer, the biographer.

"He made a lot of people angry with things that he said," he says. "His race for governor was doomed after an interview came out that he had done with Playboy where he complained about the food in Albany and said a lot of unkind things about New York state outside of New York City."

Koch was known to say unkind things about political rivals, too — and even ordinary New Yorkers who disagreed with him, as he told NPR in 1984.

"Occasionally you're yelling at one another. Not in a hostile way, but in a family way," he said.

Koch's mouth finally cost him his job as mayor. His relationship with African-American voters — never great to begin with — soured for good when he suggested that Jews would be "crazy" to vote for Jesse Jackson in 1988. The next year, Koch lost the Democratic primary to David Dinkins, who went on to be the city's first African-American mayor. Koch never ran for office again, but he never left the public eye, either.

He did a stint behind the bench on the People's Court; he hosted a popular talk radio show; and he stayed active in politics, endorsing causes and candidates he favored, with little regard for party affiliation. But many New Yorkers will remember Koch as the mayor who helped lead the city back from the brink.

"I made a commitment to myself that whatever it would take that we would endure so as to hand this city on to future generations," he said in 2012 when the Queensboro Bridge was renamed in his honor. "And we did it."

Koch, who already had a plot at Trinity Cemetery, overlooking the Hudson River, once said: "I don't want to leave Manhattan — even when I'm gone." His spokesman, Arzt, said a funeral will be held Monday.