Accessibility links
For New Orleans, Superdome A Symbol Of City's Spirit The Superdome has hosted heavyweight fights, papal visits and — after this weekend — seven Super Bowls, an NFL record. But no event looms larger in the stadium's history than Hurricane Katrina, the 2005 storm that turned the stadium into a teeming shelter of last resort and left it nearly ruined. 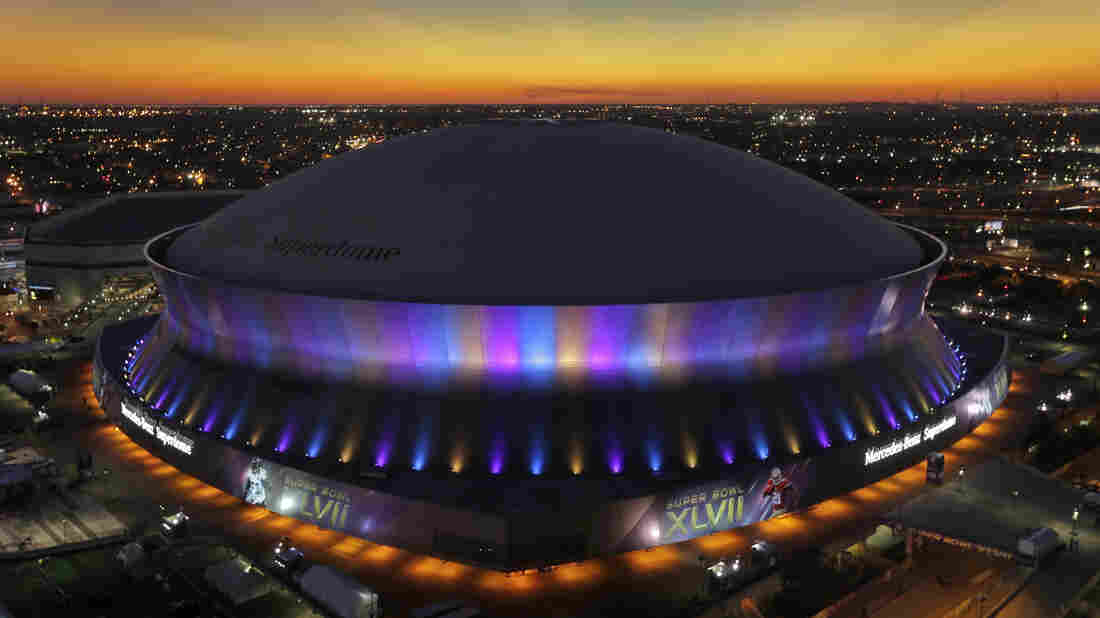 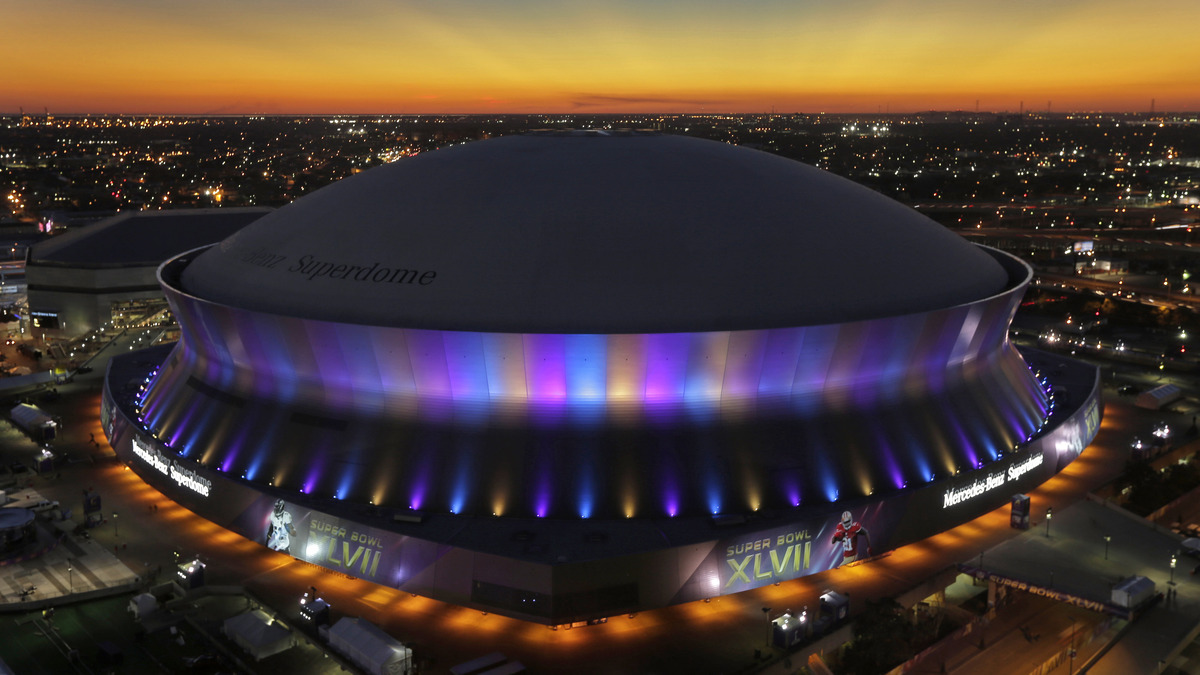 The San Francisco 49ers play the Baltimore Ravens in Super Bowl XLVII at the Superdome in New Orleans on Sunday.

The Superdome in New Orleans has hosted heavyweight fights, papal visits, and — after this weekend — seven Super Bowls, an NFL record. But no event looms larger in the dome's history than Hurricane Katrina, the 2005 storm that turned the stadium into a teeming shelter of last resort.

During the storm, reporters spared no hyperbole when describing scenes of human suffering. The Superdome, in particular, was described as a "hellhole" and "apocalyptic," and it was sort of true.

"The thing I remember most about it was the smell," says Doug Thornton, a senior vice president at SMG World, the company that manages the stadium.

Like 30,000 others, Thornton rode out the storm, and its aftermath, at the stadium; it was five long, hot days with no electricity and no running water. Rain poured in from above; Katrina's howling winds had shredded the dome's mammoth, pristine white roof. There were other problems as well. 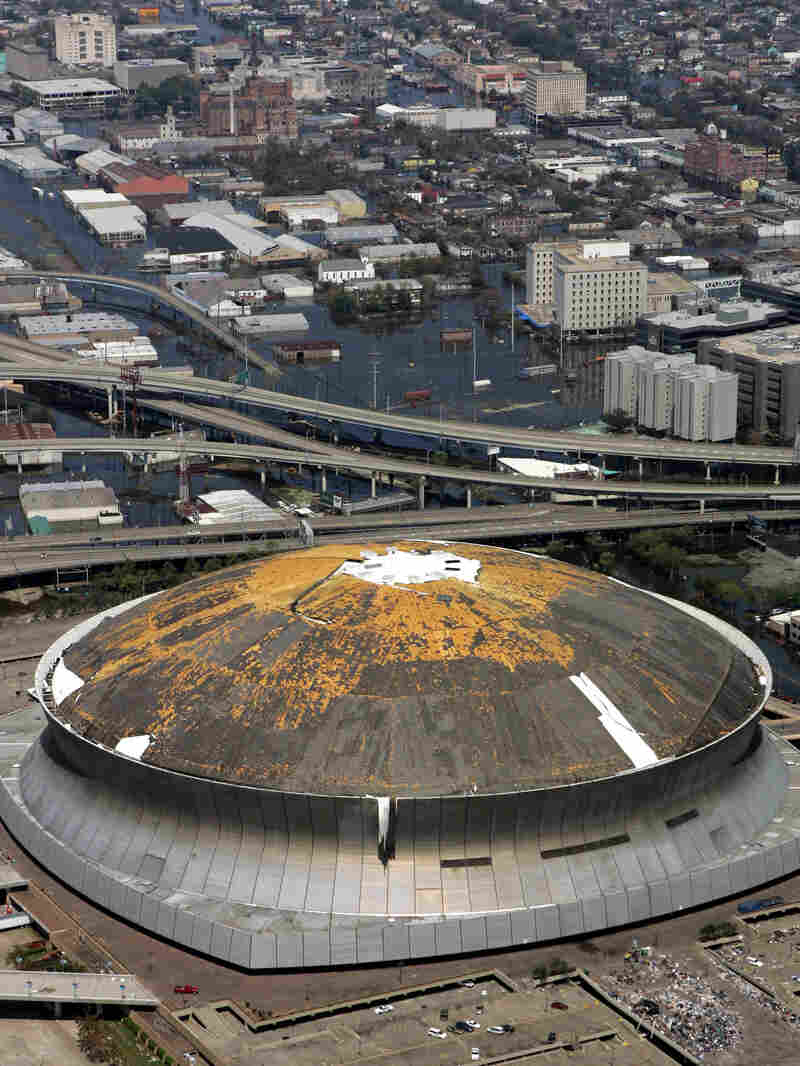 The Superdome provided shelter for victims of Hurricane Katrina in 2005, but was described as a "hellhole." David J. Phillip /AP hide caption 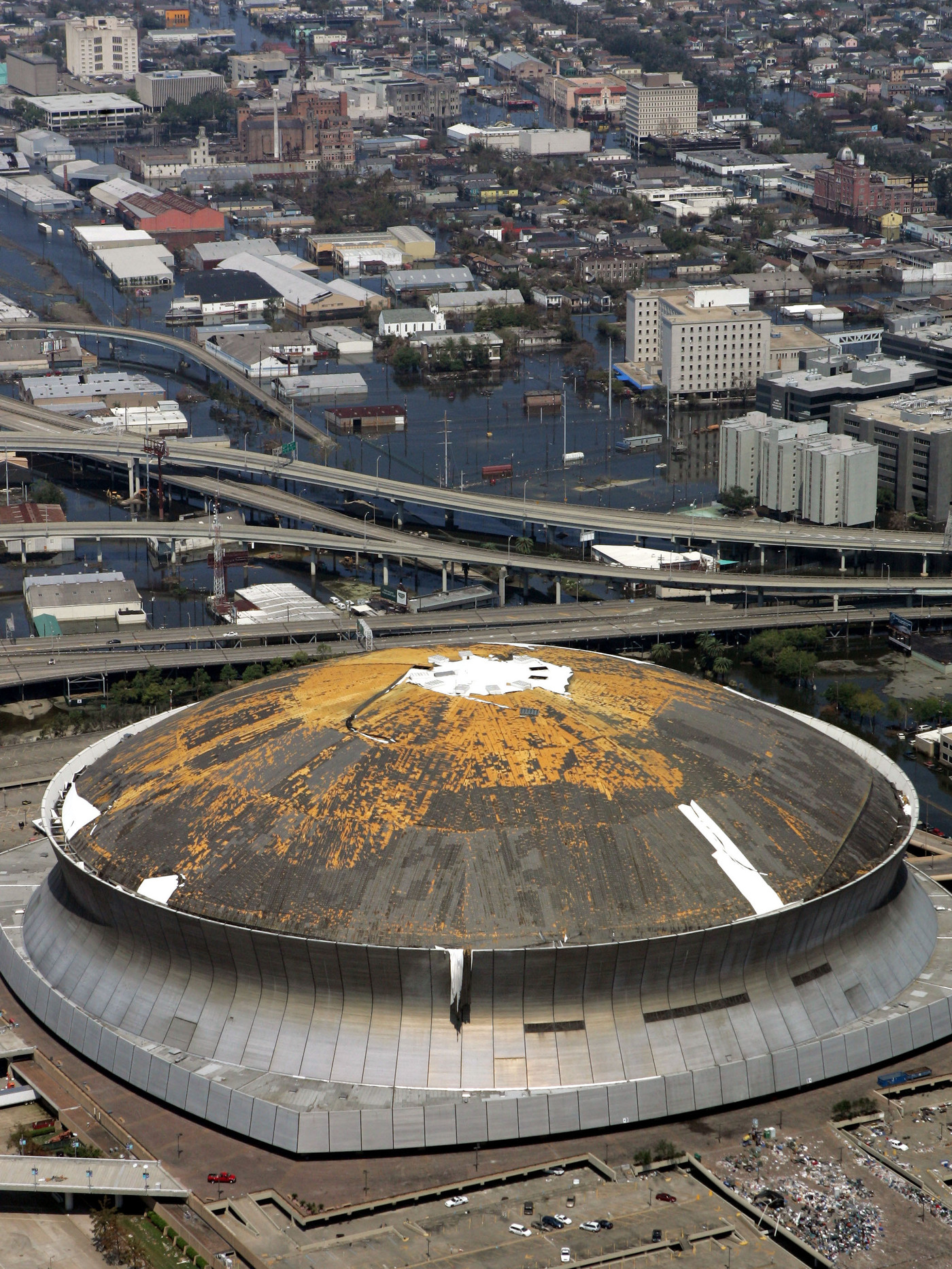 The Superdome provided shelter for victims of Hurricane Katrina in 2005, but was described as a "hellhole."

3 Things To Say At A Super Bowl Party

Brain Injuries And The NFL: A Fan's 5 Stages Of Grief

"There were flies everywhere. Garbage bags seeping and oozing. Human waste all over the floors; the scene was horrific," Thornton says. "You probably couldn't create a movie set that looked as bad as it did that day."

But the hardest part, Thornton says, came after a helicopter finally took him out. From the sky, he could see the full scope of the damage. He says he remembers thinking the Superdome's fate was in question.

"For me that was the low point," he says, "and I don't mind telling you that I wept all the way to Baton Rouge by helicopter that day."

Instead of giving up, however, officials allotted more than $330 million to renovate the damaged structure. New Orleans Mayor Mitch Landrieu — who was lieutenant governor at the time — says there was no other option.

"That building is an iconic symbol for the people of New Orleans and will always reflect our willingness to get back off our knees and move forward," Landrieu says.

Of course, winning helped too.

In the dome's re-opener in 2006, the New Orleans Saints faced their archrival, the Atlanta Falcons. The Falcons were supposed to win, but on the fourth snap of the game, the Saints blocked a Falcons punt that sparked New Orleans to victory.

"I distinctly remember hearing people in the press box slam their hands down on the press box counter, and that never happens," says Times-Picayune sports columnist Jeff Duncan, who was at the game. "We're not supposed to cheer in the press box, but people couldn't help themselves."

Since then, the Saints have enjoyed historic success, even winning their first Super Bowl three years ago — a game that Saints superfan Lionel Alphonso still can't discuss without getting emotional.

"You're sitting there and they win, and everyone starts crying. It was amazing," Alphonso says. "You never thought you would see adults crying, but it happened."

These days, Alphonso is just happy the city is hosting the big game once more. He'll be watching the Super Bowl of course, but Alphonso doesn't care so much about the outcome. As far as he's concerned, New Orleans wins either way.