Accessibility links
From A Land Where Music Was Banned — To Carnegie Hall The Taliban tried to ban all music in Afghanistan. But now, 48 young Afghans — boys and girls — make up an orchestra that is coming to the U.S. to perform at a couple of the most prestigious venues in America. 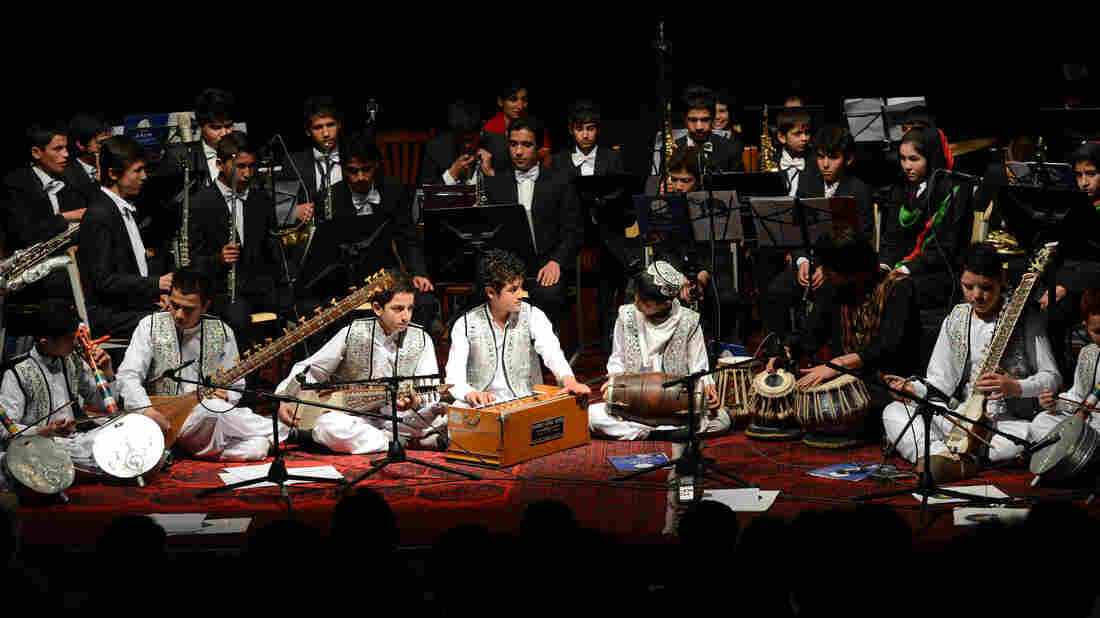 Afghanistan's youth orchestra performs in Kabul on Jan. 31. The orchestra is coming to the U.S. and will appear at Carnegie Hall and the Kennedy Center. Shah Marai/AFP/Getty Images hide caption 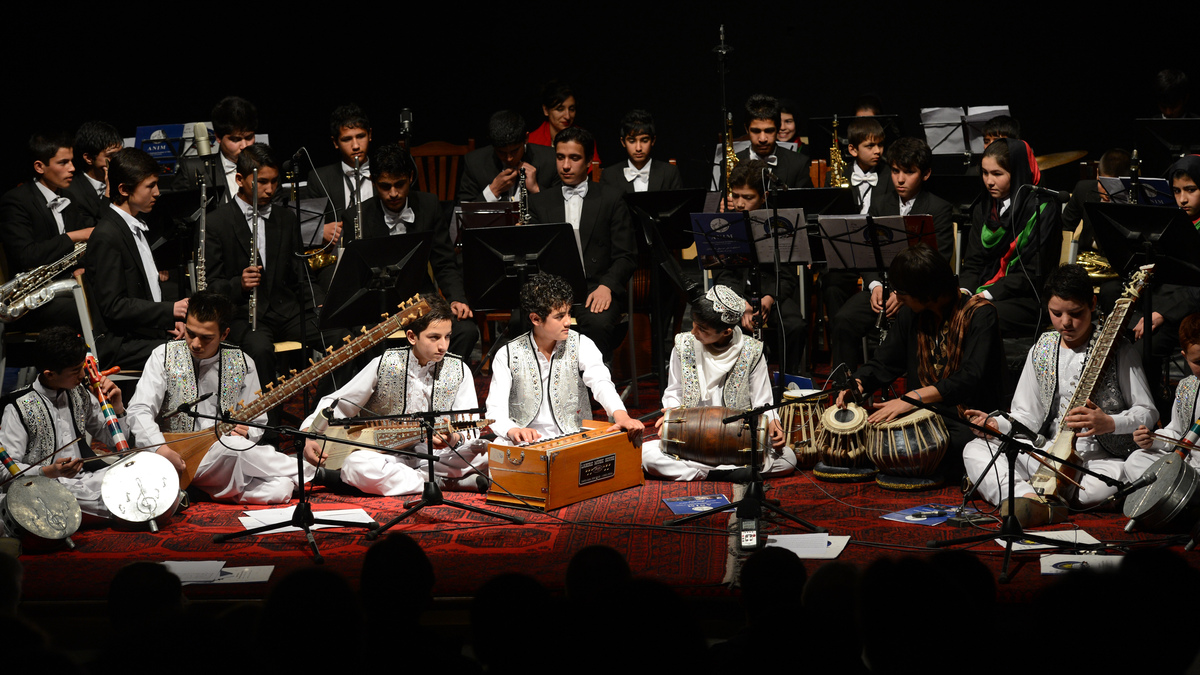 Afghanistan's youth orchestra performs in Kabul on Jan. 31. The orchestra is coming to the U.S. and will appear at Carnegie Hall and the Kennedy Center.

In Afghanistan, there was no sound of music when the Taliban ruled from 1996 to 2001. The Islamist militants destroyed music CDs and instruments and even jailed musicians.

Today, there are music schools and young Afghans playing in public. And, this weekend, 48 Afghan boys and girls are traveling to the U.S. to perform at Carnegie Hall and the Kennedy Center.

At a recent performance in Kabul, young musicians sat on the stage tuning saxophones and sitars — some of the instruments bigger than the children themselves. The front row featured kids in sparkling traditional Afghan dress with Eastern instruments.

Behind them, students clad in tuxedos sat with their violins and flutes. A crowd of parents, friends, and diplomats filled the several hundred seats of the French Cultural Center in Kabul.

"Once again I'm very pleased to welcome you for the third annual Winter Music Celebration," said Olivier Huynh-Van of the French Embassy.

But this wasn't just a winter concert. It was also a sendoff celebration for the young members of the Afghanistan National Institute of Music.

The conductor is American violinist William Harvey. He's one of seven Westerners who teach alongside more than 30 Afghan instructors at the institute. On this night, Harvey led the Afghan musicians, and a few of their teachers, through a program of Eastern and Western music. 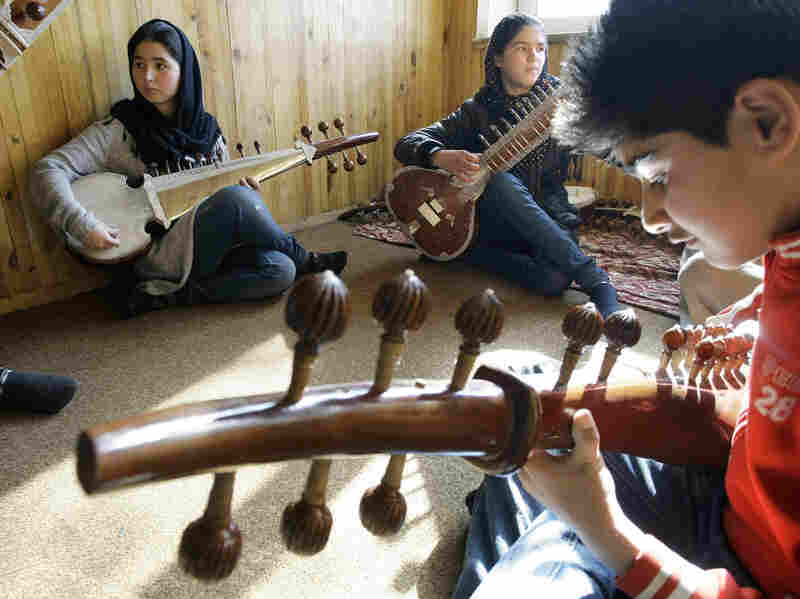 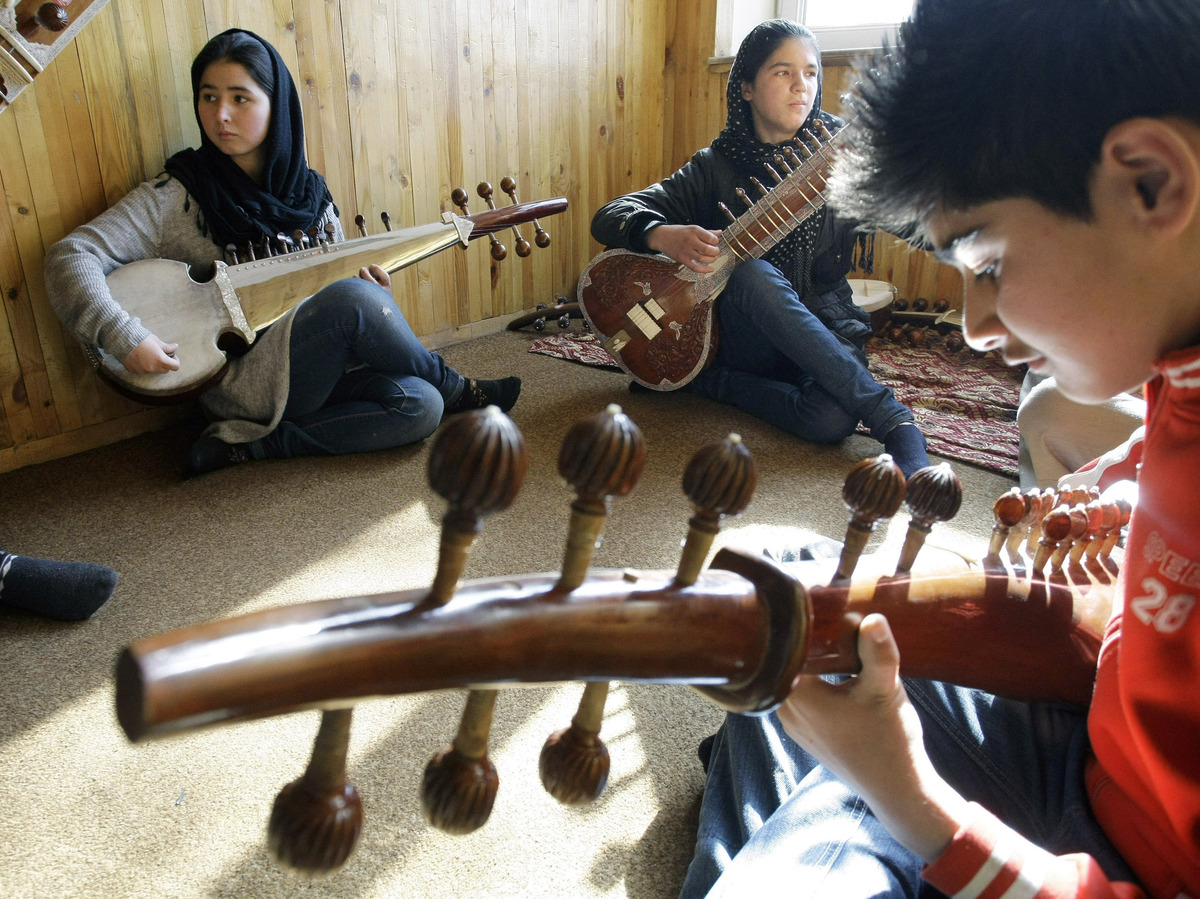 The Afghanistan National Institute of Music in Kabul trains both boys and girls. Here, students practice in January.

He says he tries to find a mix of Afghan songs that lend themselves to Western instruments, and Western songs that can accommodate traditional Afghan instruments. He says even though these kids have come a long way in a few years, he still has to tailor the arrangements to their abilities.

For example, Ravel's "Bolero" is perfectly suited to the youth orchestra.

"The happiness, the smile on the lips of the students, this is the reward that I'm getting for the work that I'm doing here," says Ahmad Sarmast, the founder and director of the school.

He returned from Australia in 2008 to launch the institute, which opened two years later. The trip to the U.S. evolved out of a request by the World Bank, one of the school's funders, to perform at its Washington headquarters.

"We decided why not work a bit harder," Sarmast says. "Let's make it bigger and take the most advantage that we can take from this tour."

Afghanistan's Love Of The Big Screen

So they rented out Carnegie Hall and arranged performances at the Kennedy Center and other venues. All told, it will cost a half-million dollars to send the 48 students to the U.S.

"Our goal, especially my goal, is to show the world that Afghanistan is not a land of the war, it's a land of the peace, a land of the talents," says Reshad Afzali, a 12th-grader and percussionist.

He says he can't even describe what he's feeling. Afzali has traveled to India once, but most of the students have never left Afghanistan before, says conductor Harvey.

Afzali says he knows what he wants to read in the press after the tour: "A big orchestra came to the U.S. and was like a bomb blast, and they showed their power. It was all Afghans, all youths, and they did a great job, that's what I want to see."