Accessibility links
The CIA And The Hazards Of Middle East Forecasting As Arab-Israeli tensions grew in the fall of 1973, the CIA offered its analysis to President Nixon's administration: War was highly unlikely. The agency kept making that case right up to the time the war began. 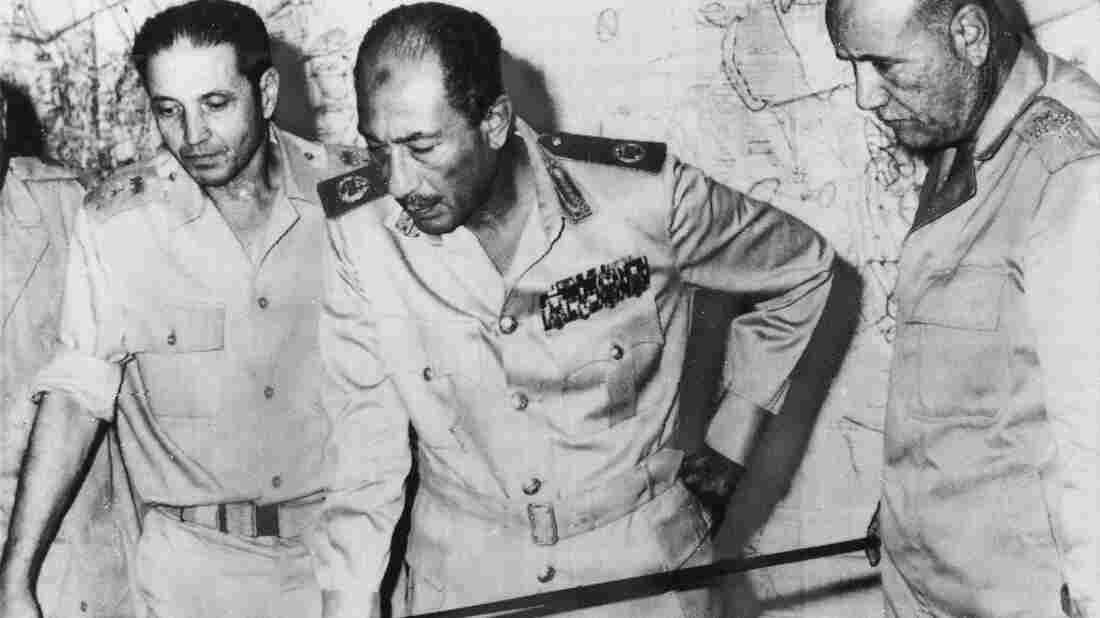 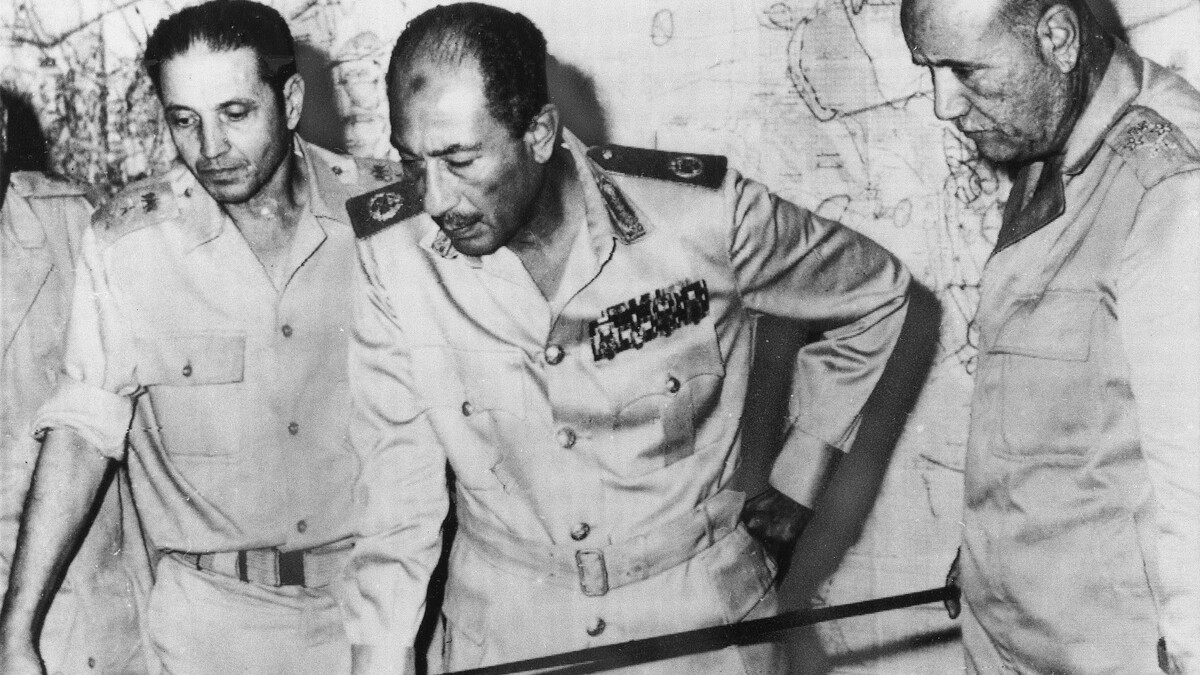 Egyptian President Anwar Sadat is flanked by senior military officers as he reviews maps of battlefield developments in the 1973 Arab-Israeli War. He's shown at army headquarters in Cairo on Oct. 15, 1973. Egypt and Syria attacked Israel, catching Israel and the CIA off-guard.

To see a photo gallery of the 1973 Arab-Israeli War, click here.

Government agencies do not often acknowledge their own errors, but the CIA has done just that with the declassification of intelligence memoranda on the 1973 Arab-Israeli War.

The documents show that agency analysts, down to the last minute before the outbreak of fighting, were assuring President Nixon, Secretary of State Henry Kissinger and other policymakers that Egypt and Syria were unlikely to attack Israel.

Those assessments, in the words of a CIA postmortem report from December 1973, "were — quite simply, obviously, and starkly — wrong." Nearly 40 years later, the CIA analysts responsible for those judgments say they are still troubled by their mistakes.

The declassified CIA documents, released during a conference last week at the Nixon Library in Yorba Linda, Calif., show that agency analysts had abundant signs that Egypt and Syria were preparing to attack Israel, but disregarded the evidence, considering the war scenario too implausible.

By early October 1973, Egyptian President Anwar Sadat had positioned forces along the banks of the Suez Canal, across from the Israeli-occupied Sinai Peninsula.

In Syria, President Hafez Assad had sent several army divisions to the border of the occupied Golan Heights, overlooking northern Israel. A human intelligence source in Syria passed what he said was a detailed Syrian war plan to the CIA, indicating how the invasion of Israel would proceed.

Secretary of State Henry Kissinger wanted to know whether the CIA believed the Syrian source. The assignment to evaluate the Syrian's report fell to Richard Kovar, the agency's top Middle East analyst. 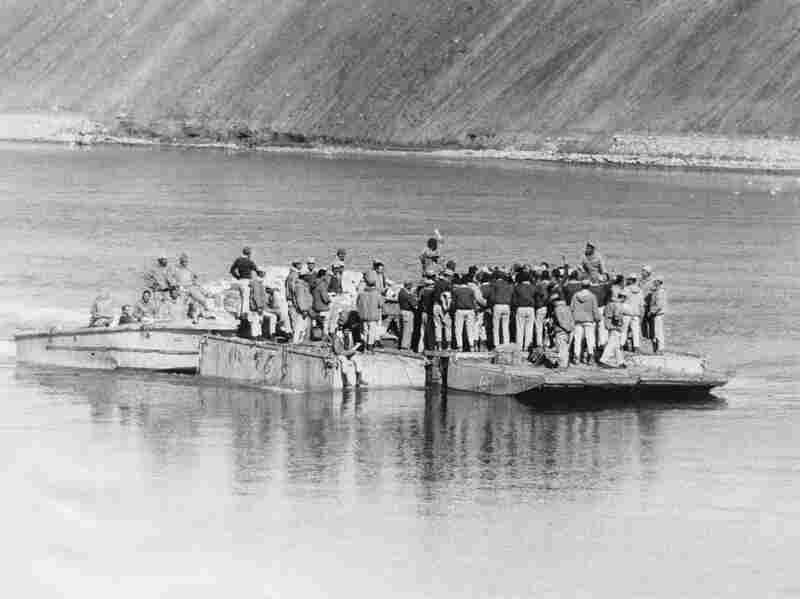 Egyptian soldiers cross to the eastern side of the Suez Canal during the 1973 war. Egyptian forces initially broke through the Israeli forces on that side of the canal. Keystone/Hulton Archive/Getty Images hide caption 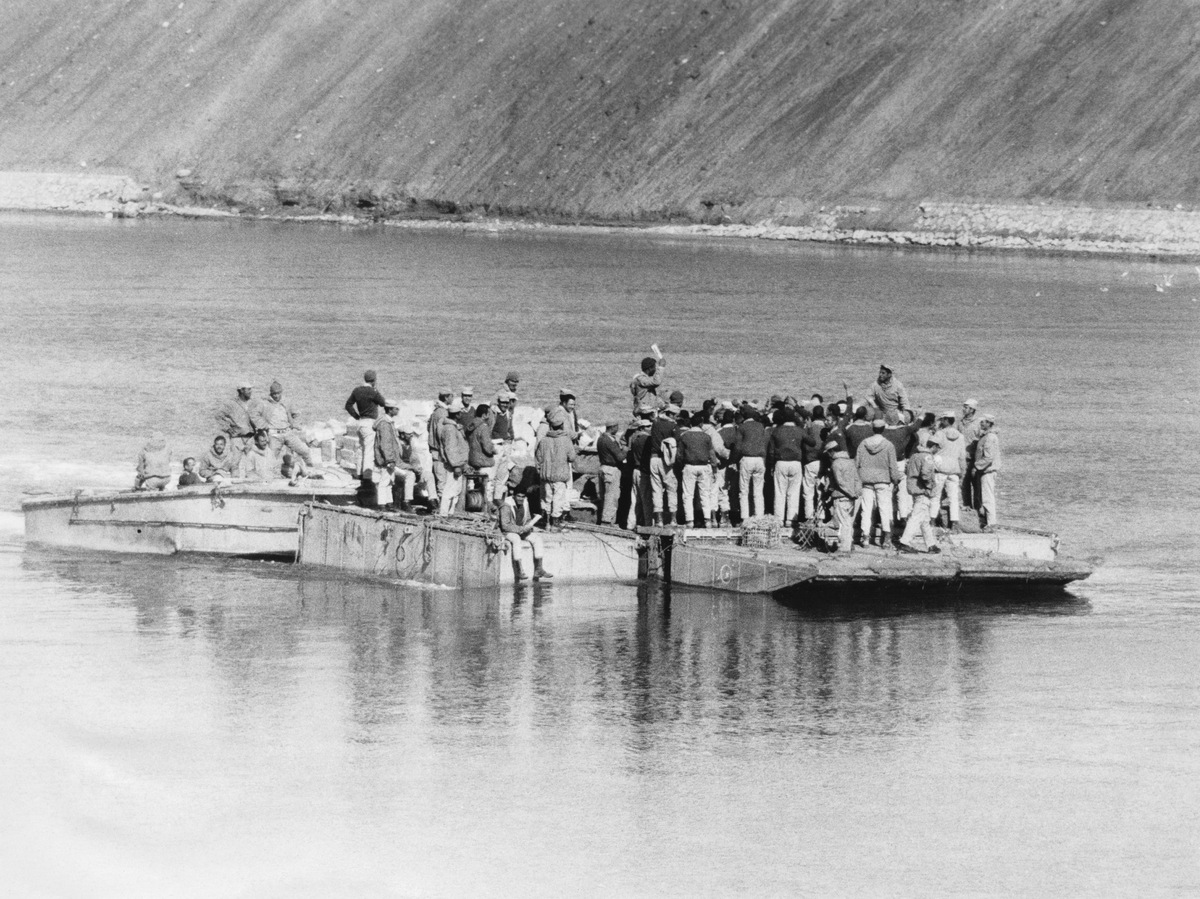 Egyptian soldiers cross to the eastern side of the Suez Canal during the 1973 war. Egyptian forces initially broke through the Israeli forces on that side of the canal.

"The [CIA Operations Center] called me, and I came in," Kovar recounted in an interview recently with NPR. "I got together with the Office of Strategic Research analyst, and we worked out a very formal response, saying why we didn't think [a Syrian invasion of Israel] was possible. That was my call."

Kovar drafted the memorandum for Kissinger and other State Department officials, confidently and without hesitation.

In the memorandum, Kovar and his fellow analysts argued that a Syrian attempt to retake the Golan Heights "has no hope of success. The defeat and destruction of the forces earmarked for the operation would cripple the Syrian Army and would have profound consequences for the cautious and pragmatic President [Assad]."

That memo is one of several CIA documents on the Arab-Israeli War declassified by the agency and discussed at the conference at the Nixon Library. In addition to Kovar, other former CIA analysts candidly acknowledged their failure to foresee the outbreak of hostilities in October 1973.

"In retrospect, I don't know why we didn't give more warning," said Charles Allen, who participated in the writing of an Oct. 4 report by the United States Intelligence Board. "We continue to believe that an outbreak of major Arab-Israeli hostilities remains unlikely for the immediate future," the report stated.

A day later, Allen and his CIA colleagues were even more outspoken, in a bulletin focusing on the Egyptian military buildup along the Suez Canal.

"Our lead sentence," Allen pointed out in his remarks at the Nixon Library, "will live forever in my mind" — and he proceeded to read it aloud.

"The exercise and alert activities under way in Egypt may be on a somewhat larger scale and more realistic than previous exercises, but they do not appear to be preparations for a military offensive against Israel," Allen said.

The Egyptian move across the Suez Canal came just a few hours later. The CIA was not alone in its failure to anticipate the Arab attack. The Israelis had also been insisting that there would be no war, even when U.S. officials laid out reasons for concern. In his comments at the Nixon Library conference, Allen said Israeli "hubris" may have influenced U.S. thinking.

"Despite the worries we had in Washington, the vigor with which the Israeli intelligence services responded [to U.S. queries], I think, had a tremendous effect on agency assessments," Allen said.

The Israelis and the CIA were both wrong.

Early on Oct. 6, 1973, Egyptian troops crossed the Suez Canal and drove deep into territory held by Israel. The Syrian army charged into the Golan Heights. In Washington, neither Nixon nor Kissinger had seen any reason to question the CIA and Israeli judgments.

"We couldn't imagine that something like this would happen," said William Quandt, who served as a Middle East specialist on President Nixon's national security staff and recalled the 1973 events during the Nixon Library conference.

"We had developed a way of looking at this region that was largely forged in ... the 1967 war, which the Israelis had won hands down," Quandt noted. 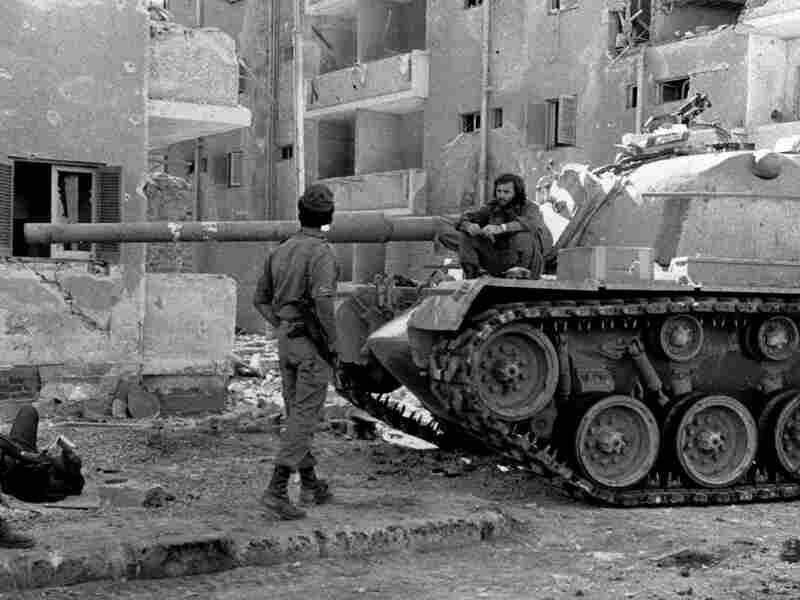 Israeli soldiers take a break near Suez City in Egypt on Oct. 29, 1973. The Egyptian military made advances against Israeli forces in the first days of the war, but Israel's army eventually recovered. AP hide caption 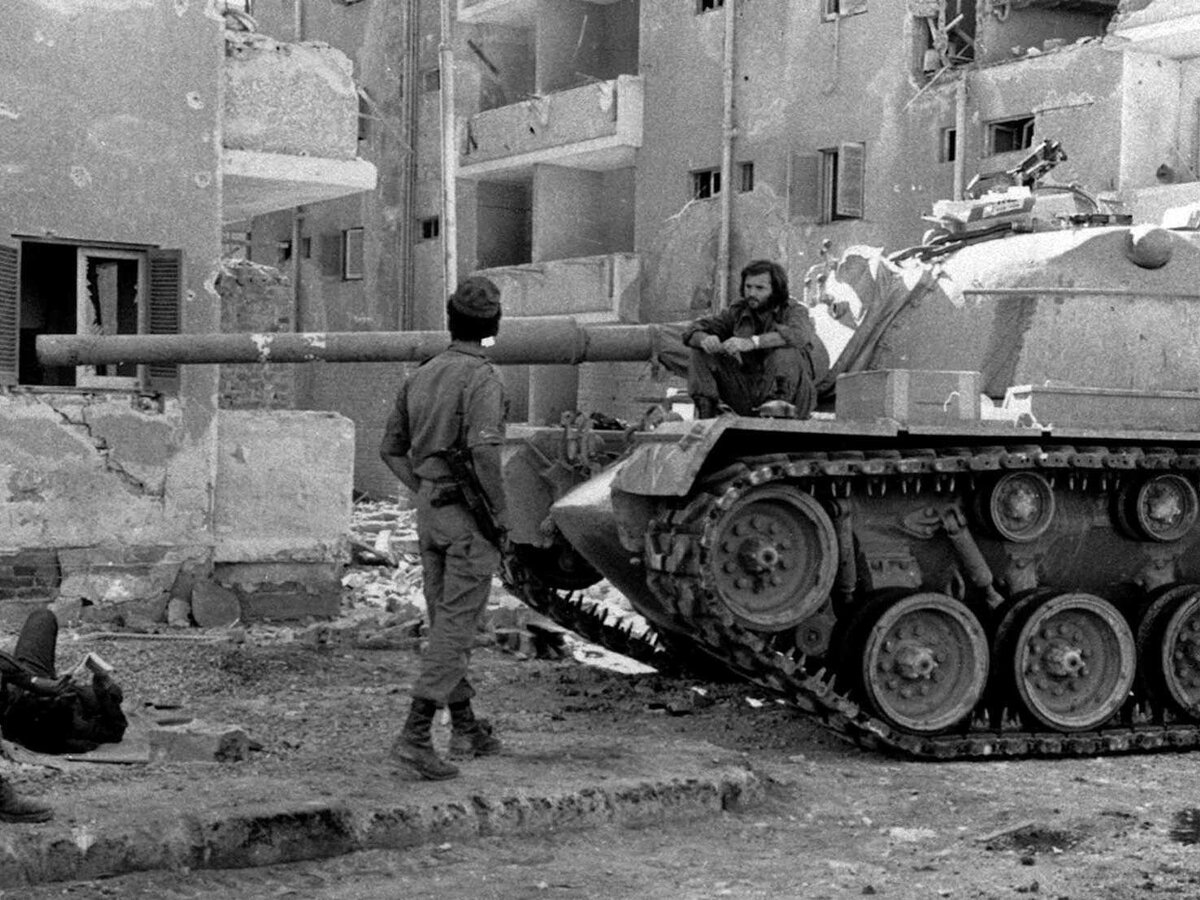 Israeli soldiers take a break near Suez City in Egypt on Oct. 29, 1973. The Egyptian military made advances against Israeli forces in the first days of the war, but Israel's army eventually recovered.

In fact, the Egyptian and Syrian armies had some impressive victories before the Israelis drove them back. Both sides suffered heavy casualties. In the war's aftermath, Arab states imposed an oil boycott on the West.

Anticipating developments in the Middle East — and understanding their implications — has long been a challenge for U.S. analysts. It still is, as evidenced by confusion about the meaning of the Arab Spring uprisings and uncertainty over what to do regarding the conflict in Syria. Moreover, the cost of getting the region wrong is high.

Martha Kessler learned that lesson as a young CIA officer in 1973, observing the events that October.

"It was a haunting experience," Kessler told the Nixon Library conference. "I was still in my mid-20s, and I watched this thing unfold. The consequences of what had happened really had a huge impact on me, and I spent a good deal of time with my parents discussing whether I really wanted to stay in a profession where a mistake had such huge consequences."

Probably no CIA analyst, however, was more pained by the 1973 intelligence failure than Richard Kovar, the agency's top Middle East expert. Now 81, he still gets choked up remembering that he made the wrong call.

"It was the lowest point, certainly in my whole career, and maybe in my whole life," Kovar told NPR. "I had never even heard a shot fired in anger, and here were these young soldiers dying, because of what I had ..."

Kovar did not finish the sentence, knowing that his errant intelligence judgment did not really lead to the soldiers' deaths, but the burden he still carries is clear.

"Just the night before, I had said there wasn't anything to worry about, and these soldiers were dying," he said.

Intelligence officers may be dispassionate, but that doesn't mean they don't feel responsible for what they say. The CIA quickly swung into action once the Arab-Israeli fighting began. But an agency historian, commenting on this declassification, noted that the 1973 war turned out to be "one of a series of events that cost the agency great regard in Washington [during] a tumultuous period."