Accessibility links
How One Company Reinvented The Hand Dryer Bathroom hand dryers used to be a hated product because they took too long to work. But a decade ago, a family-owned business in Massachusetts came out with a new product that changed the way we dry our hands. 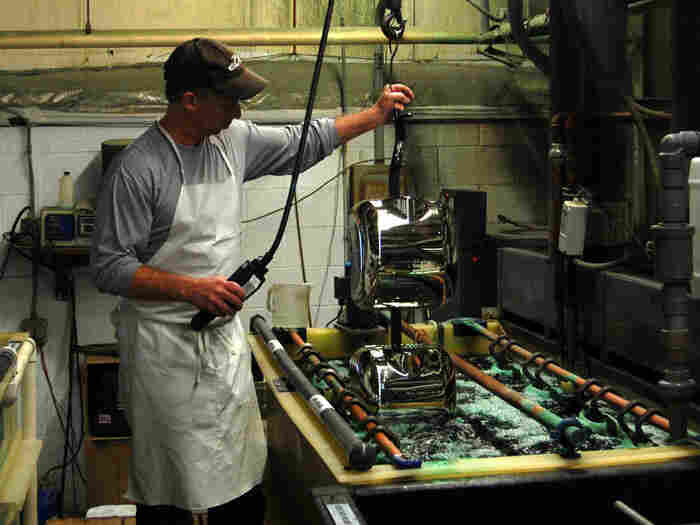 Craig McCarl dips Xlerator covers two at a time into a chrome bath. He has worked for Excel Dryer in East Longmeadow, Mass., for 31 years. Andrea Hsu/NPR hide caption 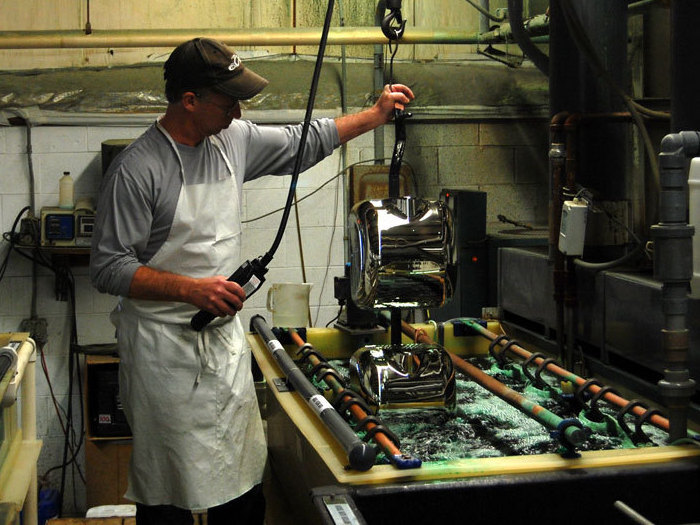 Craig McCarl dips Xlerator covers two at a time into a chrome bath. He has worked for Excel Dryer in East Longmeadow, Mass., for 31 years.

There's a lot of talk in politics about the desirability of American manufacturing and "green" jobs. President Obama talks about both often, especially wind turbines and long-lasting batteries that are made on U.S. soil.

Robert Siegel, host of All Things Considered, recently visited a Massachusetts factory that makes a product that hits those same parameters. It's arguably a force for sustainability, nearly 40 Americans assemble it, and it's an interesting case study in innovation: the high-speed hand dryer.

'We Had A Product People Hated To Use'

Excel Dryer in East Longmeadow, Mass., makes one of the most popular models. Denis Gagnon bought the company in the 1990s, but quickly discovered he had a problem.

"We had an experienced and dedicated workforce; we built a quality product, an excellent reputation for customer service," Gagnon says. "And we had a product that people hated to use."

Traditional hand dryers took 35-40 seconds to dry your hands. By that time, lots of people with wet hands had either wiped them on their clothes or grabbed a paper towel.

Searching for a better solution, Gagnon joined forces with a small firm called Invent Resources. Richard Pavelle was one of four scientists, three of them out of MIT, who had spent their careers doing serious physics and applied mathematics. After retiring from their jobs, they founded Invent Resources and offered their services to companies looking to build new products.

After an idea for a faster hair dryer failed to win over Conair, Pavelle moved on to the idea of a faster hand dryer. He first took the idea to World Dryer, the leading manufacturer of hand dryers at the time, but was turned down. He then turned to the smaller company, Excel, and Gagnon. Gagnon remembers visiting Invent Resources for the first time.

"They would be one after another at the chalkboard, screaming at each other in Yiddish, and arguing how to design this or do that," Gagnon says. "And [I] just left there thinking, you know what, these guys are probably smart enough to help us figure out a way to do this." 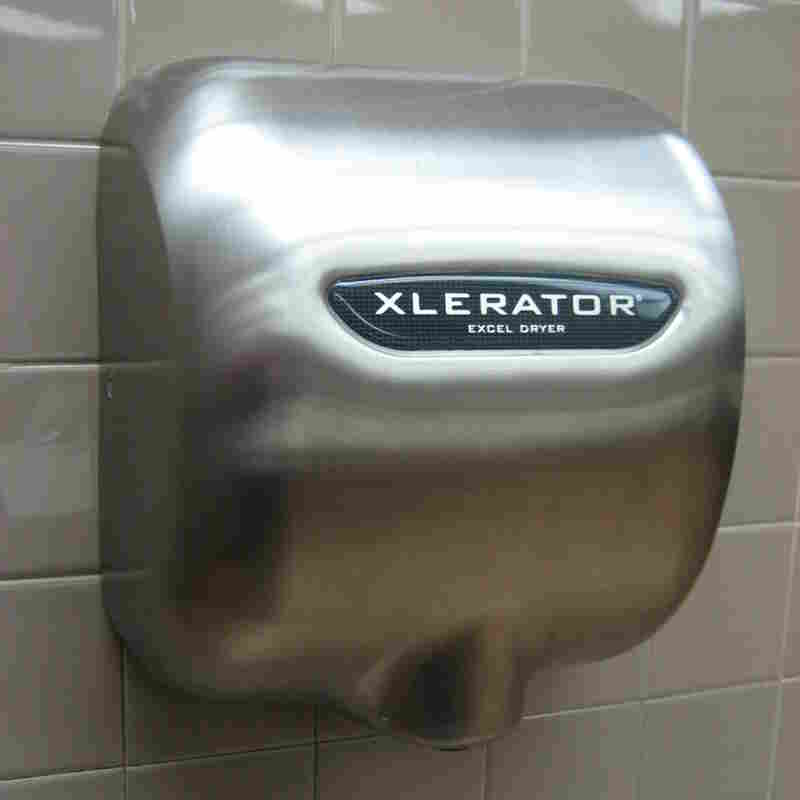 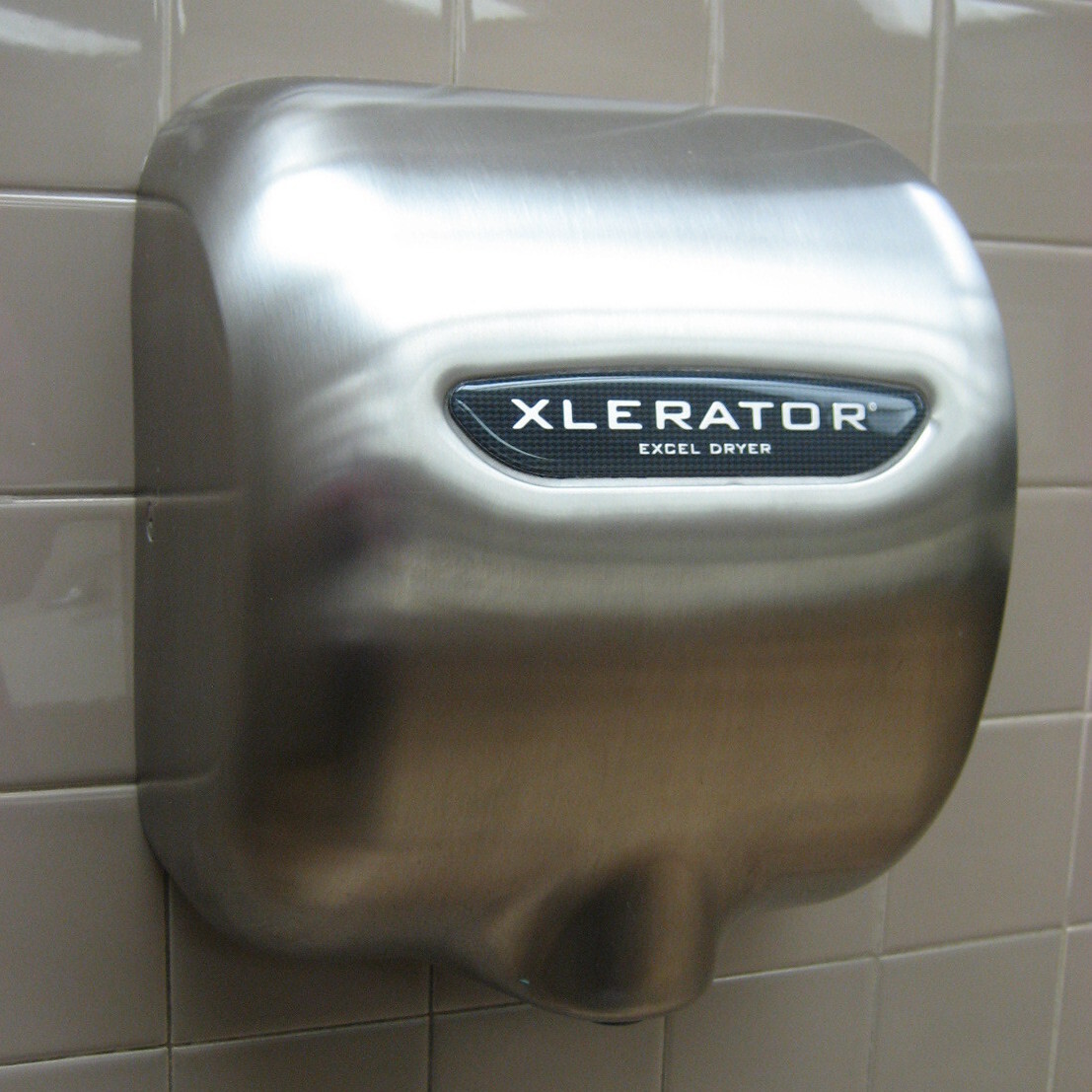 A Huge Risk Pays Off

The scientists determined that the old hand dryers wasted 90 percent of the energy going into them. A new hand dryer had to be more efficient. After 3 1/2 years of research and development, Excel had narrowed the drying time down to 12 seconds.

But getting there wasn't easy. In funding the research, Gagnon had borrowed against his home and his life insurance, and from associates and relatives. He was tapped out at the bank.

His risk paid off when the company debuted the Xlerator at trade shows.

"Literally we'd have to coax people out of the aisles to come try our hand dryer," Gagnon says. "So we'd get them up to the Xlerator and they'd put hands under, and you could see the expression in their face; there was a real wow factor to it."

It was louder than the old hand dryers, but it actually dried your hands. And it's been a hit for Excel. Gagnon says sales for the family-owned company have gone up more than 10 percent every year for the past decade.

In East Longmeadow, Mass., 38 people assemble the dryers in a remarkably unautomated plant. The circuit boards are attached by workers armed with power screwdrivers. Gagnon says the components and machinery they use are American to the greatest extent possible, but they still rely on Asian-made motors.

Today, Excel competes with other hand dryer manufacturers. Dyson, the British vacuum cleaner company, followed the Xlerator with the Airblade, the dryer you dip your hands into. World Dryer eventually came out with its own high-speed hand dryer, and there are others.

But the real competition remains paper towels. George Campbell, who used to work for Dyson, now sells hand dryers of all brands through his Chicago company, NetDryers. Using government data, the company tried to measure the potential market for hand dryers.

"There's roughly 30 million bathrooms away from home in the United States," Campbell says. "Paper towels alone, without hand dryers, are probably in around 90-95 percent of those bathrooms."

That means there are well over 25 million bathrooms that are potential hand dryer installations.

Campbell says the argument for the product is two-fold. First, it's cheap. The basic model of the Xlerator costs $400. Hand dryers are also low-maintenance machines and they don't require someone to stock clean towels and cart away used ones.

He says they're also sustainable. That 12 seconds of drying time uses some electricity, but Campbell quotes research from MIT (which Dyson actually commissioned), that makes paper towels out to be the real energy guzzlers.

There are some who argue against hand dryers. The paper towel industry points to studies that find the dryers blow germs around. The hand dryer makers cite a Mayo Clinic study that suggests the question of germs is answered by how you wash, not how you dry.

Hand dryers also won't help you clean up a spill on your desk. But Campbell says that's not the point.

"They don't open a door, shut a sink, clean your face, dry a spill. They're hand dryers. That's what they do," Campbell says. "They're now doing it well, and they're doing it with low energy, and in a way that a lot of people do enjoy."

All Things Considered will air the second part of this story on Tuesday.