Accessibility links
Woody Guthrie's 'House Of Earth' Calls 'This Land' Home Folk musician Woody Guthrie wrote thousands of songs in his lifetime — but as far as anyone knows, he only wrote one novel. Recently discovered, House of Earth is the story of struggling young sharecroppers who dream of creating a safe haven amid the dust storms and economic depression of the 1930s.

Woody Guthrie wrote thousands of songs in his lifetime — but as far as anyone knows, he only wrote one novel. Recently discovered, House of Earth is the story of a young couple living in the Texas Panhandle in the 1930s. They dream of building a house that will withstand the bitter winds and ever-present dust that constantly threaten the flimsy wooden shack they call home. 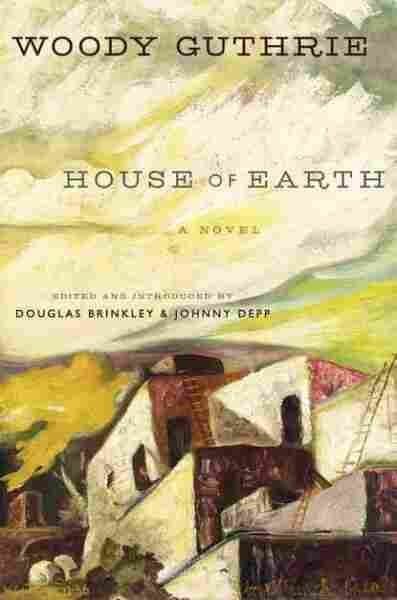 The novel is being released by Johnny Depp's new publishing imprint at HarperCollins, Infinitum Nihil. It was Depp's publishing partner, historian and author Douglas Brinkley, who tracked down the lost novel after he stumbled across a reference to it while doing research. When he sat down to read it, Brinkley could hear the same Woody Guthrie he had grown to love through his music.

"Woody Guthrie has something that every artist would dies for: a voice," says Brinkley. "You can read House of Earth and you know it's Woody Guthrie. You know it's coming from the heart."

When Woody Guthrie's daughter, Nora Guthrie, first read the book, she had a different reaction. "The opening chapter was so sexy," she says, laughing. "I just went, whoa, Dad, where are you going with this?"

Both Brinkley and Guthrie suspect that in part, it is the sexually explicit material in the book that kept it from being published after it was written in 1947.

And there was another reason: The book would have come out just as an era of virulent anti-communism was getting under way, so it was also most likely that politics kept it from being published. Because, Brinkley says, the book is both a love story and a polemic against the bankers and businessmen Guthrie blamed for keeping the poor, poor — a theme often heard in his music.

House of Earth is the story of struggling young sharecroppers Tike and Ella May. Nora Guthrie says her father has created a portrait of their life: sowing seeds, planting crops, making love, giving birth, and dreaming of creating a safe haven amid the dust storms and economic depression of the 1930s.

"These ideas of seeds and sex and procreation and earth, and farm language and things like that — adobe houses being built out of this combination of water and earth," muses Nora Guthrie, "that's what really struck me once again is how he hammers home this really rough and rich life."

Tike is determined to build a new house made of adobe, convinced that such a house will give them better protection from the unrelenting weather. Nora Guthrie says this idea of building adobe homes was one of her father's obsessions.

The folk balladeer Woody Guthrie, shown here at his home on Mermaid Avenue in Coney Island in 1950, was also a prolific writer and visual artist. Courtesy of Nora Guthrie/HarperCollins hide caption

The folk balladeer Woody Guthrie, shown here at his home on Mermaid Avenue in Coney Island in 1950, was also a prolific writer and visual artist.

In his song "Bling Blang" he writes:

I'll grab some mud and you grab some clay
So when it rains it won't wash away.
We'll build a house that'll be so strong,
The winds will sing my baby a song.

There are passages in the novel where you can hear Woody Guthrie the lyricist. He plays with words, veers into poetry, wanders off into streams of consciousness. Brinkley says the book does not have a strong narrative, but Guthrie makes deft use of language to bring his characters to life.

"And he is able to really do a great job of capturing dialects and the slang expressions of a region," says Brinkley. "But it's done with a poetic flourish. You can almost speed-read the novel out loud, and when you do there is a musicality to it."

Brinkley says the themes of House of Earth are reflected in Guthrie's most famous song, "This Land Is Your Land," especially in lyrics like these, which are not heard in most popular versions of the song:

There was a big high wall there that tried to stop me;
Sign was painted, it said private property;
But on the back side it didn't say nothing;
This land was made for you and me.

"Woody believed that the people that lived on the land should own the land," says Brinkley. "So he was outraged at what bankers were doing, and when people were struggling and they couldn't pay rents and were being forced off the land. And so 'This Land Is Your Land' and House of Earth are both aimed at people being able to say if you grew up on a property it should be yours, and you should be able to live on it."

Brinkley says though this book was written in 1947 and set in the Depression era, it's as relevant today as it was then.

"This novel takes place everywhere," he says. "It happens to be in Texas, but this book echoes for global shantytowns in many ways, and the need to try and find the dignity of dwelling and shelter."

In the end, Guthrie leaves the reader with a lot of unanswered questions about the fate of his characters. And that makes sense, Brinkley says, because real life is messy and rarely gets resolved in a tidy package — especially if you are poor.

Read an excerpt of House Of Earth