Accessibility links
FMLA Not Really Working For Many Employees Labor organizations say the Family and Medical Leave Act is too restrictive and that workers often have to choose between their family and their livelihood. Now, there are calls for Congress to expand the law and provide paid leave. 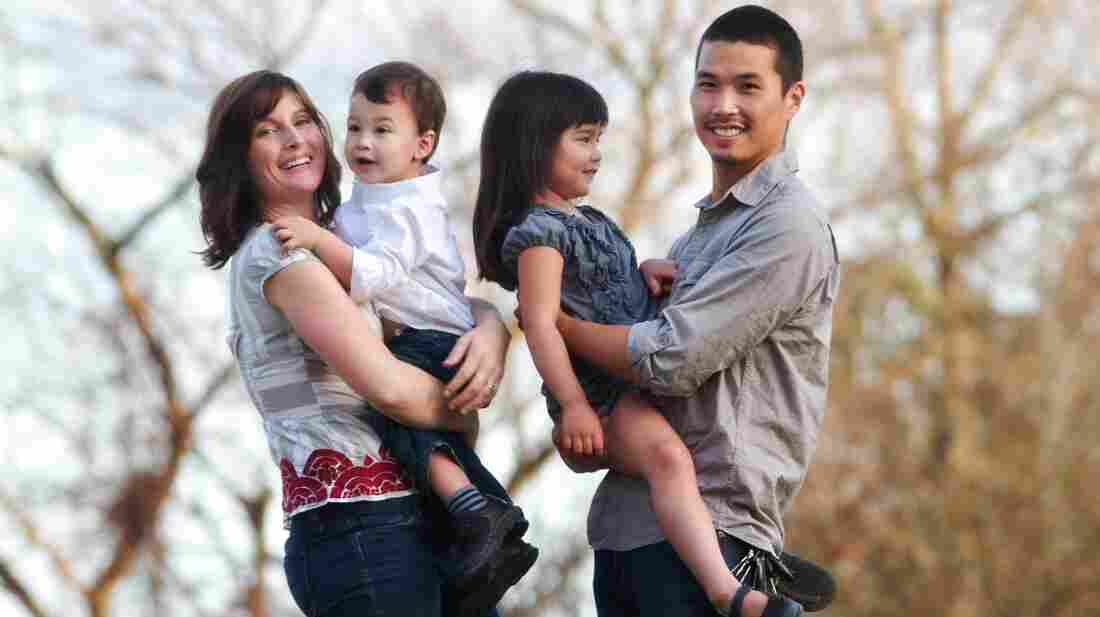 Jeannine Sato holds her 2-year-old son, Keni; 5-year-old Hana is held by her father, Mas Sato. Jeannine decided to leave her job when her employers said she could take six weeks off after giving birth to her first child or risk losing her job. Courtesy of Jeannine Sato hide caption 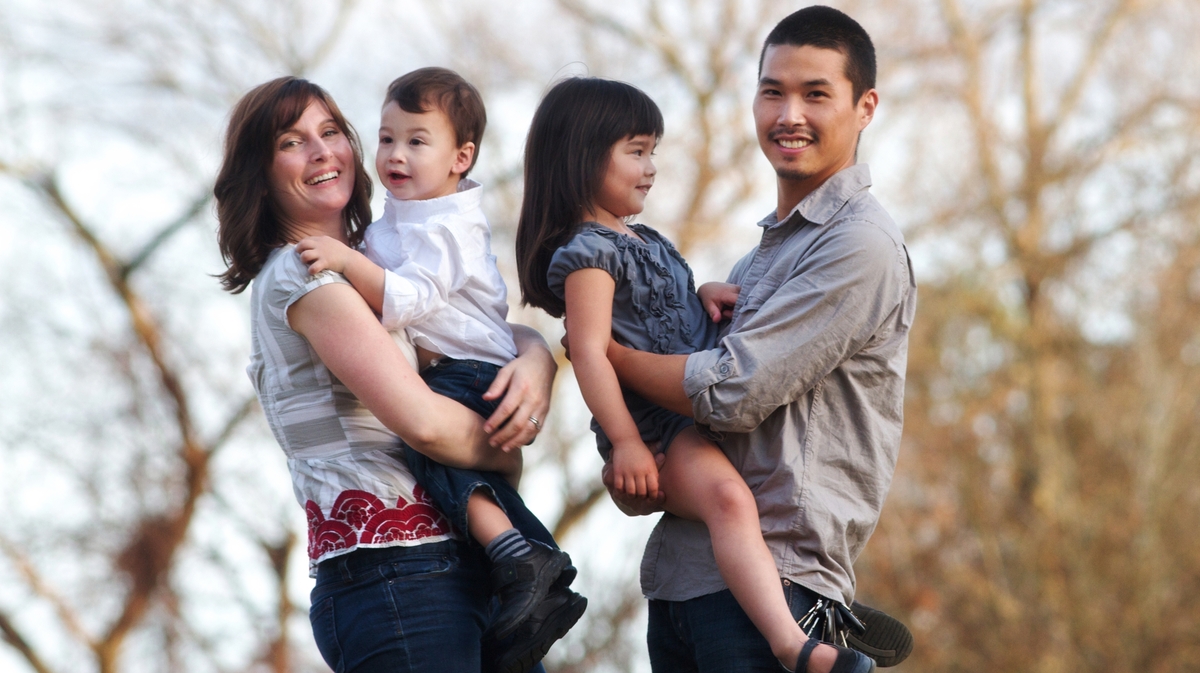 Jeannine Sato holds her 2-year-old son, Keni; 5-year-old Hana is held by her father, Mas Sato. Jeannine decided to leave her job when her employers said she could take six weeks off after giving birth to her first child or risk losing her job.

Twenty years after President Bill Clinton signed the Family and Medical Leave Act, workers' rights groups say many employees still must choose between their family or their job.

They're marking the anniversary with calls to expand the law, and for Congress to pass a new one that would provide paid leave.

What Falls Under The FMLA?

FMLA provides up to 12 weeks per year of unpaid leave if an employee has a new baby or a serious illness in the family. But there are a number of restrictions, meaning some 40 percent of the workforce is not eligible.

"It has a very narrow definition of family," Ellen Bravo, of Family Values @ Work, says.

"Many people are [cobbling] together two or three part-time jobs, none of which have enough hours to make them eligible for Family and Medical Leave. So this is a disaster," Bravo says. "We have to bring the rules in line with the realities of the workforce."

Crucially, businesses with fewer than 50 people are also exempt.

Not Eligible For FMLA

"I was shocked to find out that I wasn't eligible for FMLA," says Jeannine Sato, who became pregnant when she was a manager at a North Carolina nonprofit that touted its family-friendliness. She was told to return to work after six weeks or risk losing her job.

"I had a lot of issues with that," she says. "A difficult delivery. I had a colicky baby. My husband was working. It was very stressful, and I left as a result of it."

Ironically, Sato's husband's employer — an even smaller firm — felt so badly for the couple that it voluntarily gave him a month of unpaid leave.

Sato realizes she was still lucky. Today, she works with low-income women who are new mothers. 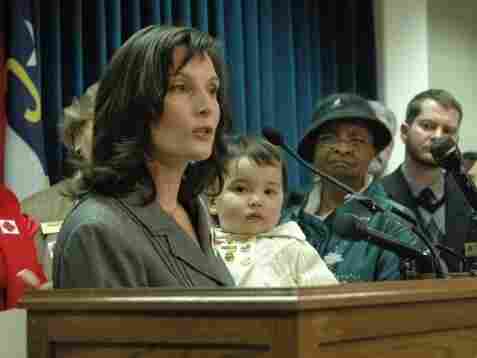 Sato holds Hana as she speaks during a 2009 press conference at the North Carolina state Legislature about the need for paid sick days. Courtesy of Jeannine Sato hide caption 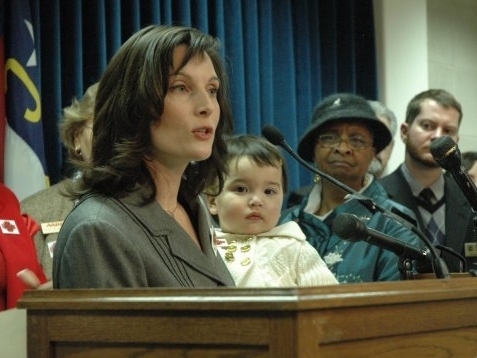 Sato holds Hana as she speaks during a 2009 press conference at the North Carolina state Legislature about the need for paid sick days.

"I see parents going back to work after one or even two weeks because they have no paid sick [leave], they have no vacation, they're not eligible for FMLA," she says. "Even if they were eligible, they couldn't afford to take the unpaid time off."

FMLA Not For Everyone?

"Employers have constraints on them," says Marc Freedman, the head of labor law policy at the U.S. Chamber of Commerce, which led opposition to the Family and Medical Leave Act.

He says even unpaid leave is too big a burden for many small companies. For larger businesses, he says FMLA works pretty well for new parents, but medical leave can be a nightmare for employers to track.

Freedman says it's especially challenging when workers use it intermittently, with no advance notice.

"It's a ripple effect," he says. "Other people have to cover for them. Customers are left wanting. It can create a lot of problems throughout the workplace."

The Society for Human Resource Management says FMLA is consistently the top issue for employers who call its hotline. Among their questions: Which employees are eligible? And which illnesses are "serious health conditions"?

Then there's misuse of the law. Freedman says the leave was deliberately left unpaid to prevent that, and yet "the day of the year when FMLA leave is accessed the most is the day after the Super Bowl."

Still, a new survey by the Labor Department finds the vast majority of employers say it's easy to comply with the law and that misuse is rare.

And if there are some bad-egg workers, the same can also be said for some businesses.

Pushing Through The Pain

"It was described to me as if something really disastrous happened," says Mo Kessler, who used to work at a national grocery chain in Kentucky.

She told her bosses she had endometriosis and suffered excruciating pain a few days each month. But no one ever mentioned that she could use FMLA leave, and, at the time, she didn't know better. Kessler says she was told to push through the pain, or be written up.

"I would try to hide in the back because my face was so pale," she recalls. "I was so visibly sick that I needed to hide away from the customers, to not scare them off!"

With so many gaps and such confusion, the main debate over work and family has moved away from the FMLA and back to the original aim of those who pushed for the law: paid family leave.

Grass-roots organizations have been pushing such measures in states and cities across the country in recent years.

California and New Jersey have both passed a paid family leave insurance program in the past decade, and advocates hope they might be a model for federal legislation. They hope that will happen before another 20 years pass.