Accessibility links
For Greeks, Painful Cuts Keep Tearing At The Social Fabric Three years of austerity measures are hitting ordinary Greeks hard. Unemployment is nearly 27 percent and rising, and the once dependable safety net of welfare benefits is being pulled in. Further cutbacks and tax hikes are about to kick in. 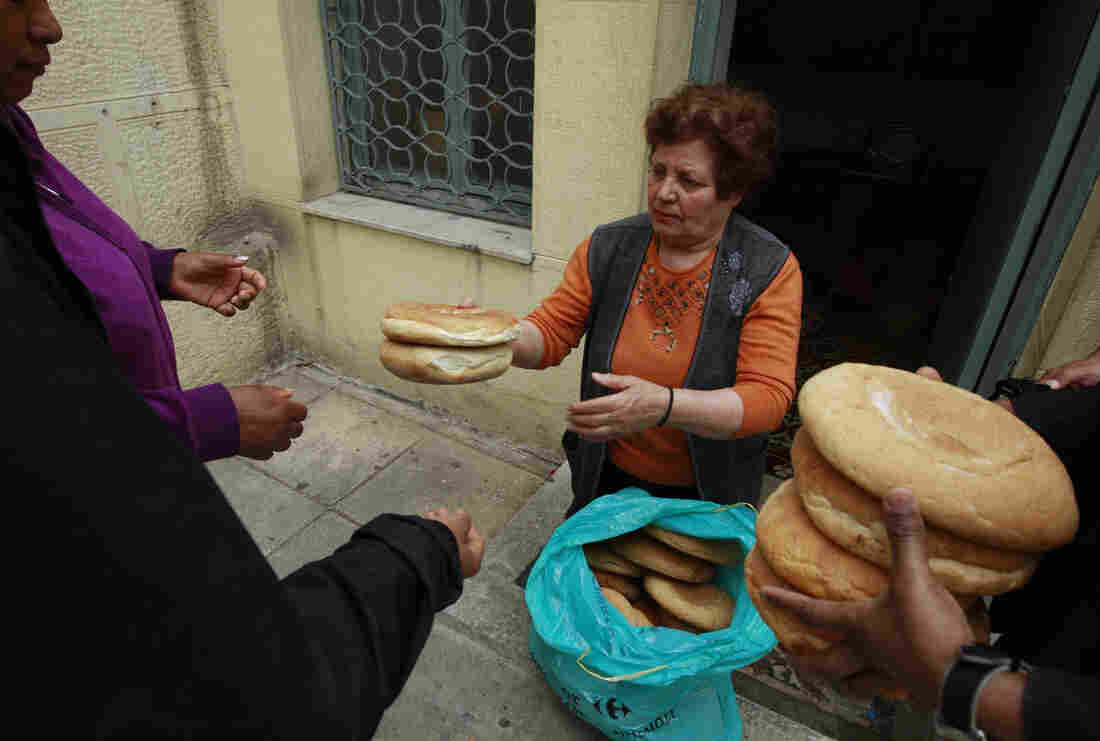 Georgia Kolia, 63, has two adult children, both unemployed. She works as a volunteer distributing loaves of bread at the Agia Zonis Orthodox church soup kitchen for the poor in Athens, Greece, in April 2012. John Kolesidis/Reuters/Landov hide caption 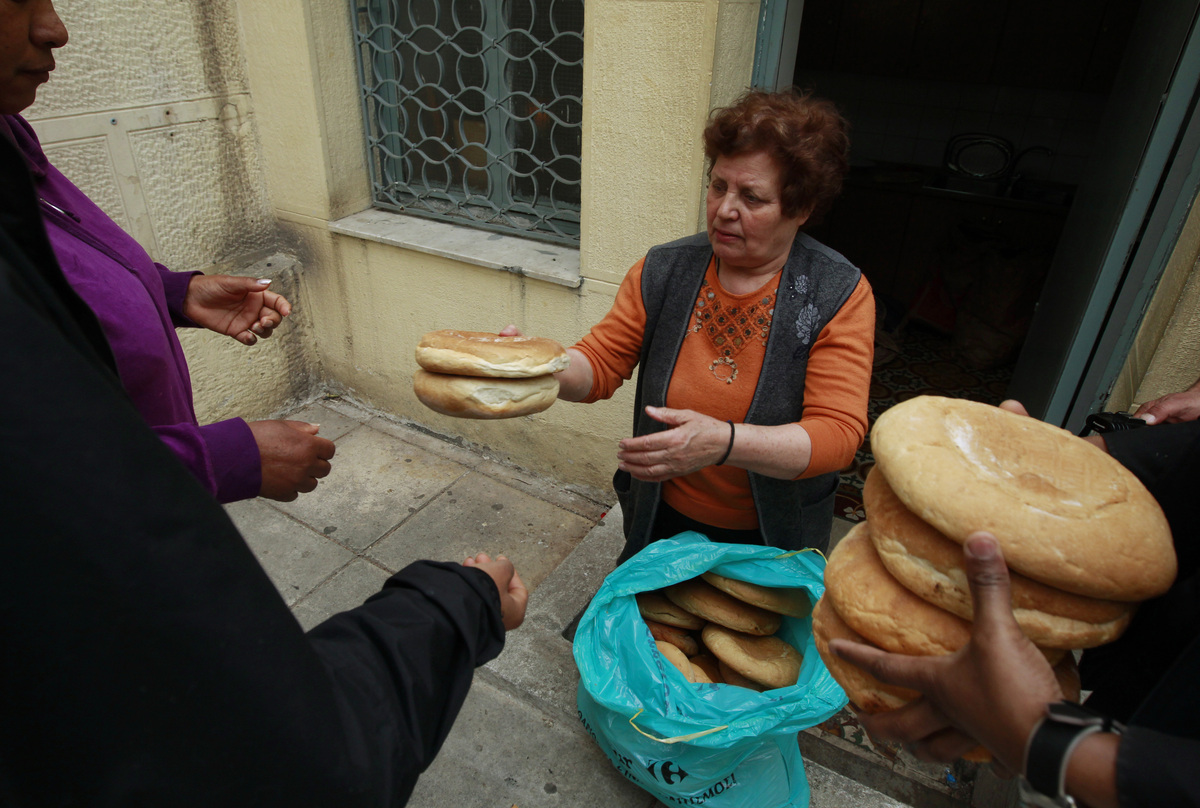 Georgia Kolia, 63, has two adult children, both unemployed. She works as a volunteer distributing loaves of bread at the Agia Zonis Orthodox church soup kitchen for the poor in Athens, Greece, in April 2012.

Greeks are feeling the squeeze. The social repercussions of three years of austerity measures imposed by international lenders are hitting hard. Thousands of businesses have shut down, unemployment is nearly 27 percent and rising, and the once dependable safety net of welfare benefits is being pulled in.

With further cutbacks and tax hikes about to kick in, Greece's social fabric is being torn apart.

Nowhere are cutbacks more visible and painful than in health care.

Universal coverage — which most countries in Western Europe have in some form — is no more in Greece. Now, a year after losing a job, a worker loses all benefits. 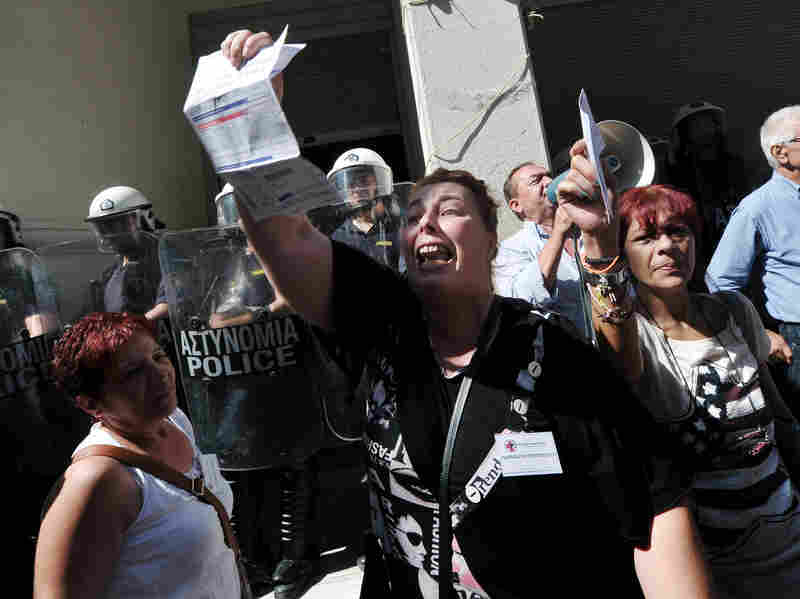 Unpaid for five months, nurse Paraskevi Petropoulou holds her unpaid electricity bill outside the Ministry of Health in Athens during an anti-government protest on Sept. 28, 2012. Louisa Gouliamaki/AFP/Getty Images hide caption 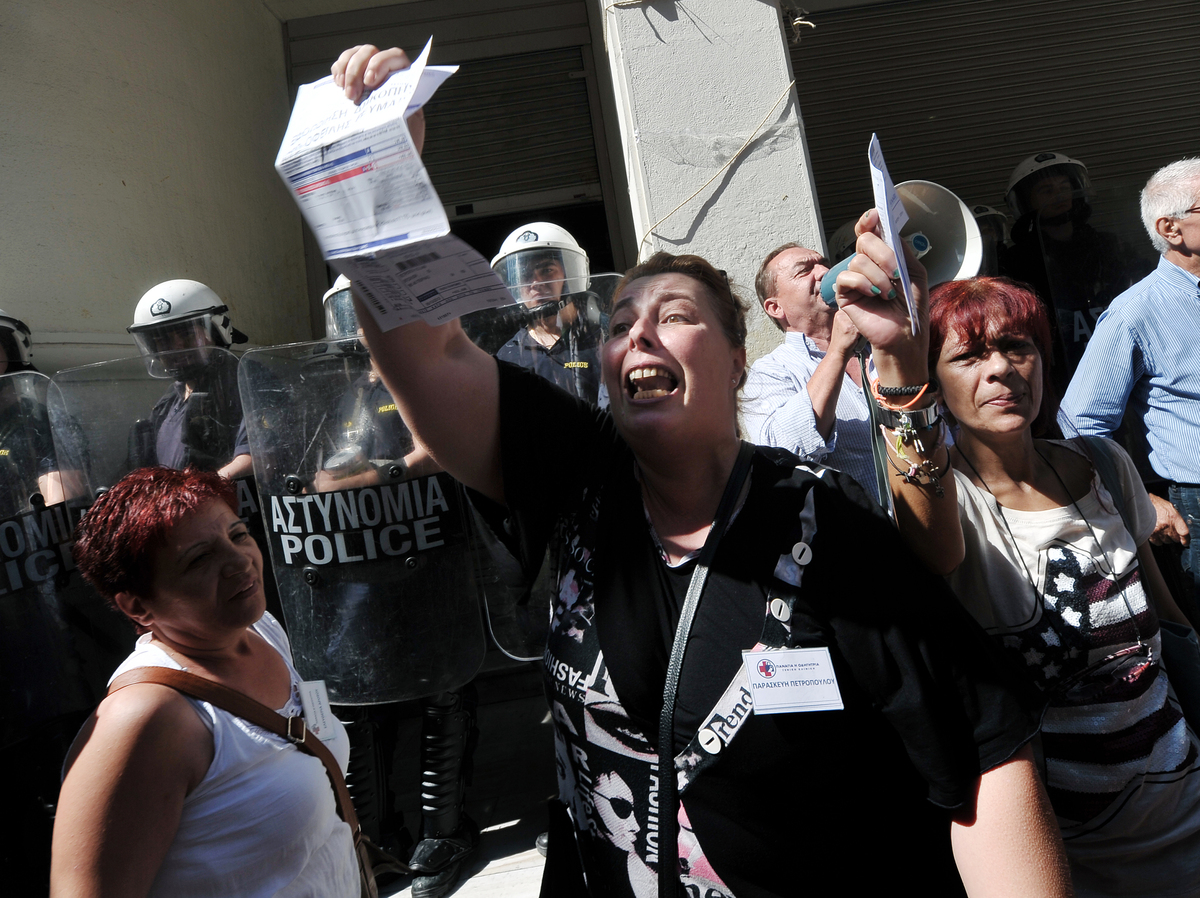 Unpaid for five months, nurse Paraskevi Petropoulou holds her unpaid electricity bill outside the Ministry of Health in Athens during an anti-government protest on Sept. 28, 2012.

There have been changes in the health sector across Europe. For example, raising copayments for medicine and doctors' visits are now more common. But the cutbacks in Greece have been the most drastic so far.

The effects of these cuts are obvious at the Hellenikon Metropolitan Social Clinic outside Athens, located near an abandoned U.S. Air Force base.

Olga Baklatzi is one of the many volunteers at what they call the underground clinic, created 13 months ago to serve those no longer covered by health insurance. She describes the kind of people who come to the clinic.

"Middle-class, simple people, working people, they just lost their jobs, builders, people who worked in shops, they are well-dressed, not scruffy or dirty," Baklatzi says.

Medicines are donated by families of patients who don't need them any more and by pharmacies.

In just over a year, 4,500 patients have visited this clinic, which provides everything from dental to cancer care.

A well-dressed, 56-year-old woman waits in line at the reception desk. She prefers not to give her name for privacy reasons. She has come for free medicines for her breast cancer. She hasn't had health coverage since 2008, when her family recording company went bankrupt.

She is angry. Her three grown children have university degrees, speak several languages and have all lost their jobs. She holds back tears. Her bitterness, she says, is the cause of her cancer.

One of the founders of the underground clinic is cardiologist Giorgios Vichas. With three years of austerity cuts, he says, life expectancy is dropping, while infant mortality has grown by 4 percent — shocking statistics in peacetime in the Western world.

The clinic, Vichas says, offers more than doctors and medicines.

"We also give them back the hope and dignity that has been taken away from them," he says.

Greeks Try To Help Each Other

Under A Cloud Of Austerity, Real Smoke Clouds Greece As Well

Amid Europe's Debt Crisis, A Sharp Rise In Suicides

A Health Care Tragedy Plays Out In A Greek Port

Household incomes have dropped by about 30 percent as a result of the economic shock therapy. A thousand people lose their jobs every day, and many still employed have not been paid in months. Hundreds of thousands of families have no income or benefits whatsoever. One-third of the population lives below the poverty line.

Some better-off Greeks, in a sign of solidarity, leave packaged food near trash bins to spare their more unfortunate neighbors the humiliation of scavenging. Lines at soup kitchens are getting longer.

At lunchtime on a recent day, one soup kitchen — a large room in a church-owned building — is packed with people reciting grace. It's a 10-minute walk from the posh hotels in Athens' Syntagma Square.

Xenia Papastavrou runs the nonprofit Borume. She says some people have come from afar to pick up meals.

"Maybe the kids don't even know their mother is going to the soup kitchen," she says. "They think mother is cooking at home."

Over the past year, Borume — which means "we can" — has matched up 600 soup kitchens with food donors such as hotels, restaurants and bakeries. It also works with 110 municipalities to provide food for public schools where more and more children are arriving hungry.

A Growing Sense Of Resignation

Another sign of plummeting living standards is the growing number of people unable to pay rising taxes and utility bills. With arrears to the state growing by the billions of euros and the deepening recession, all the best-laid plans to put the Greek economy back on track are at risk. Analysts fear an unending cycle of more cutbacks and tax hikes.

Vassilis Kodakis, 32, who has a degree in civil engineering, lost his job as a construction company foreman and now works as a barista at whatever cafe is hiring. He feels lucky to have a job, even with no benefits. He keeps quiet and doesn't complain. He knows hundreds are waiting in line, eager to take his job.

"If you want to have family now, you are going to think about it twice," Kodakis says. "You can't dream. If you want to travel, what is travel? I have never been out of Greece. What dreams? No dreams, you have to keep a low profile and go day by day."