Accessibility links
First Listen: Nick Cave & The Bad Seeds, 'Push The Sky Away' The Australian singer and writer assembles a string of slow-burning ballads that seethe and surprise, punctuated by Warren Ellis' gorgeous strings and bits of Cave's own grabby, pervy innuendo.

Push The Sky Away 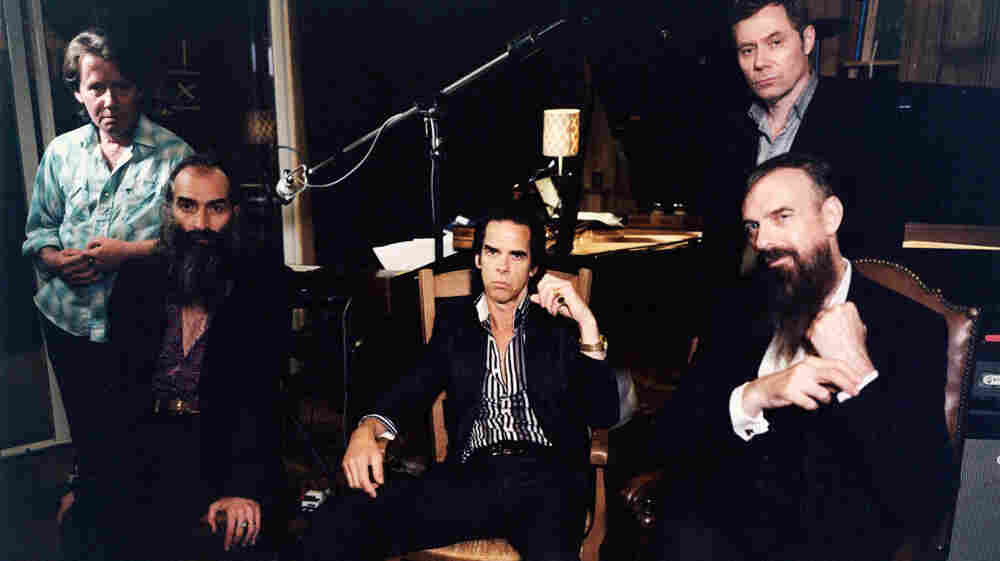 Seedy and slick, grandiose and intimate, mysterious and matter-of-fact, Nick Cave's songs unfold like short stories from bygone eras — that is, until Hannah Montana and Wikipedia make their jarring appearances. On Cave's 15th album, Push the Sky Away, the Australian singer and writer assembles a string of slow-burning ballads that seethe and surprise, punctuated with Warren Ellis' gorgeous strings and bits of Cave's own grabby, pervy innuendo.

Out Feb. 19, Push the Sky Away may be broken into nine pieces, but the whole is paced like one magnificent 43-minute Nick Cave song: tense and mysterious at first, then increasingly full-blooded and lovely as the strings make their portentous entry at the top of "Water's Edge." Cave even pulls off a neat meta trick, as he crafts a hypnotic six-and-a-half-minute dirge in "Jubilee Street" before returning a few tracks later with "Finishing Jubilee Street" — a song whose fantastical wanderings commence with its namesake's completion.

Of course, writing "Jubilee Street" is itself a feat worth noting: The song captures the essence of Push the Sky Away perfectly. Take this string of words right here: "I got love in my tummy and a tiny little pain / and a 10-ton catastrophe on a 60-pound chain / And I'm pushing my wheel of love on Jubilee Street." As uneasy corniness ("love in my tummy," "wheel of love") collides with haunting and hard-bitten poetry ("a 10-ton catastrophe on a 60-pound chain"), every unselfconscious word commands rapt attention and consideration.

Short of Tom Waits or maybe Greg Dulli, it's hard to imagine many singers perfecting such an unlikely mix. But Cave and his band have always made it sound positively majestic, as their songs conjure a glittering gutter that extends all the way to the heavens.