Accessibility links
Movie Review - 'Identity Thief': Nearly Two Hours, Stolen The individual ingredients that make up Identity Thief could add up to a great movie. But the digital-age mistaken-identity comedy wastes a talented leading actress and a passable plot; it's a predictable trudge of a road movie. 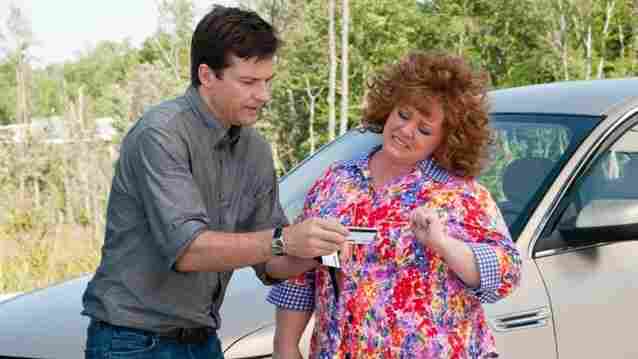 An overextended Sandy (Jason Bateman) must prevent the raunchy Diana (Melissa McCarthy) from continuing to use his identity as a financial crutch in Identity Thief. Universal Pictures hide caption

'We're Gonna Have A Little Chat'

Watch A Clip From 'Identity Thief' - 'You Gotta Feel So Dumb'

'You Gotta Feel So Dumb'

Watch A Clip From 'Identity Thief' - 'You Let Her Eat'

'You Let Her Eat'

The new road-trip comedy Identity Thief — about a guy who confronts a woman who's wrecking his credit rating — is such a catalog of missed opportunities, it probably makes sense just to list them.

The setup: Sandy Patterson, who works in a Denver financial firm (and is not supposed to be mentally challenged), blithely hands over his Social Security number to a stranger on the phone who says his accounts have been compromised, at which point his accounts get compromised. No tricks, no subterfuge, no laughs — he's just stupid.

The follow-up: Sandy flies to Florida to persuade the identity thief to accompany him home, where he'll hand her over to police. He brings handcuffs in case she's uncooperative. No tricks, no subterfuge, no laughs — he just thinks she's stupid.

The star: Melissa McCarthy, who plays the title character — and who absolutely deserves a star vehicle after stealing Bridesmaids from her better-known co-stars — gets saddled with a script that subverts her gift for verbal improv by requiring her to throat-punch all comers just as conversations get started, and undercuts her comic timing with overstaged sequences in which she gets tackled, slammed, pinned, violated, abused, busted in the chops with a guitar, beaned with household appliances and rammed full-throttle by a car.

The villain: Terminator 2's relentless, stop-at-nothing T-1000, Robert Patrick, gets a part so precisely up his alley — a relentless, stop-at-nothing bounty hunter — it has to have been intended as a joke. But the joke gets shortchanged, because in a beard and a plaid shirt he's scruffily unrecognizable. (Not to mention easily sidetracked by comparison with two thugs who are gratuitously tracking the title character.) 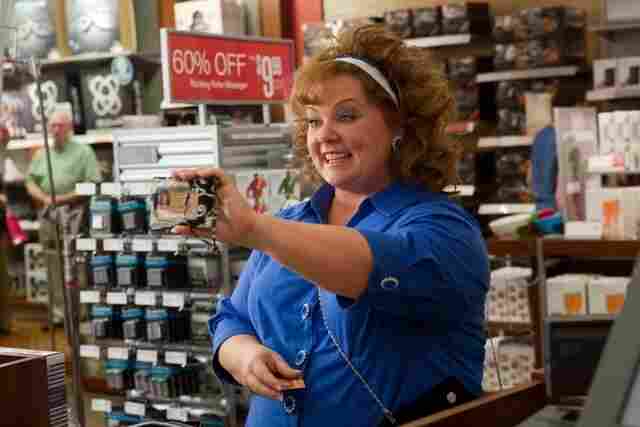 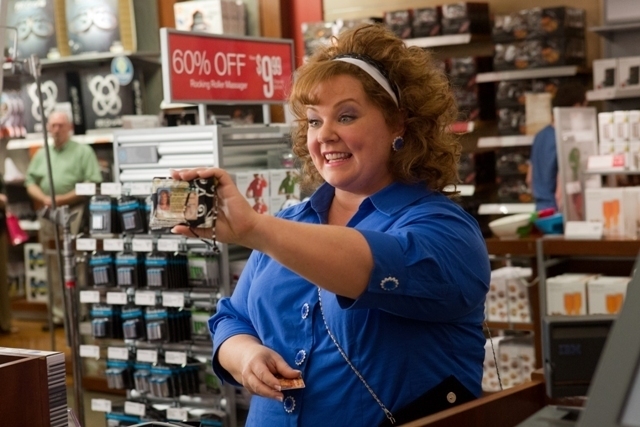 The rest: Rapper T.I. — one of those thugs, shot and stuffed in a trunk (possibly for trying to imbue his lines with a bit of personality). Raven-haired beauty Genesis Rodriguez — his thug-ette partner, shot and stuffed in a trunk (possibly for not protesting when makeup artists made her look tough and plain). Harold and Kumar's John Cho — inexplicably cast as a straight-arrow banking exec who doesn't so much as blink when his offices are searched for drugs. Jon Favreau — amusing as a boss from hell for maybe 90 seconds at the top of the picture, and then gone for the duration.

The concept: Stealing someone's identity, while no doubt ghastly for victims, can be a comic goldmine in the right storytelling hands. Think Monty Python's Life of Brian, Chaplin's The Great Dictator, the Coen Brothers' The Big Lebowski — and onstage, everything from Charley's Aunt to The Comedy of Errors. Electronic identity theft offers a host of new possibilities, and to have almost none of them explored by writer Craig Mazin and director Seth Gordon in this uninspired trudge of a road movie is the biggest waste of all.