Accessibility links
In St. Louis, Trivia Is No Trivial Pursuit What's the easiest way to raise money in one Midwestern city? Asking questions like that. On any given winter weekend in the St. Louis area, thousands of people turn out and play trivia to benefit charity.

In St. Louis, Trivia Is No Trivial Pursuit

In St. Louis, Trivia Is No Trivial Pursuit 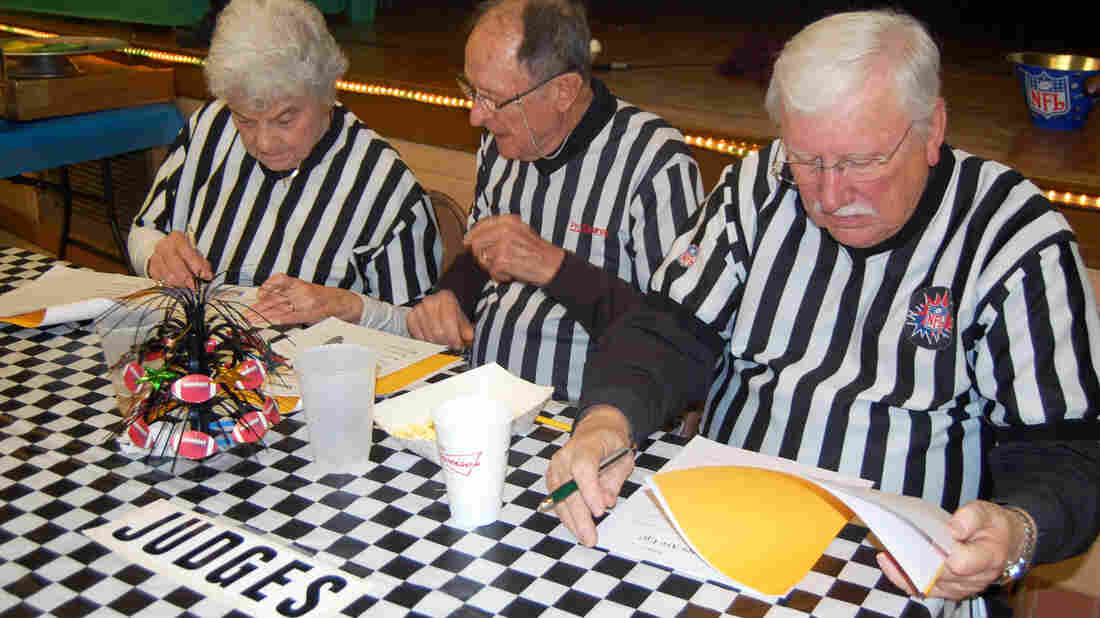 There was barely room to walk from one end of the social hall to the other last Saturday night at St. Rita Catholic Church in Vinita Park, Mo.

The occasion wasn't a wedding, a christening or even a bingo game. It was trivia.

You can participate in trivia contests on slow nights in bars in practically any city across the country. But in the St. Louis area, trivia has evolved into a major source of revenue for nonprofit organizations.

Especially in winter, every school, camp and choir seems to be hosting its own trivia night. "For me, every Saturday through April is booked, and a couple of Fridays as well," says Dan Dillon, a writer and producer at the local CBS affiliate and regular trivia emcee.

People in other cities still seem to think trivia is something limited to Jeopardy fans and other eggheads, but in St. Louis it's turned into a major participatory sport played by plenty of folks with no specialized knowledge whatsoever.

(Scroll past the photo at the end for the answers!)

1) In 1974, what was the first product in the United States to carry a Universal Product Code (UPC)?

3) Which infamous criminal was killed in 1934 after "The Lady in Red" betrayed him to government agents?

4) Who is the only American in the Monty Python comedy troupe?

5) Domenikos Theotokopoulos is an acclaimed artist known by what name?

6) What is the last word sung on the last album recorded by the Beatles as a group?

7) The White House is the most visited house in the U.S. What is the second most visited?

8) Daniel Day-Lewis won the Best Actor Oscar for 1989 for portraying artist/writer Christy Brown in what movie?

9) The National League's Milwaukee Brewers started life as an American League team in 1969 based in Seattle and called what?

10) Name one of the only words in the English language that begin and end with the letters U-N-D? 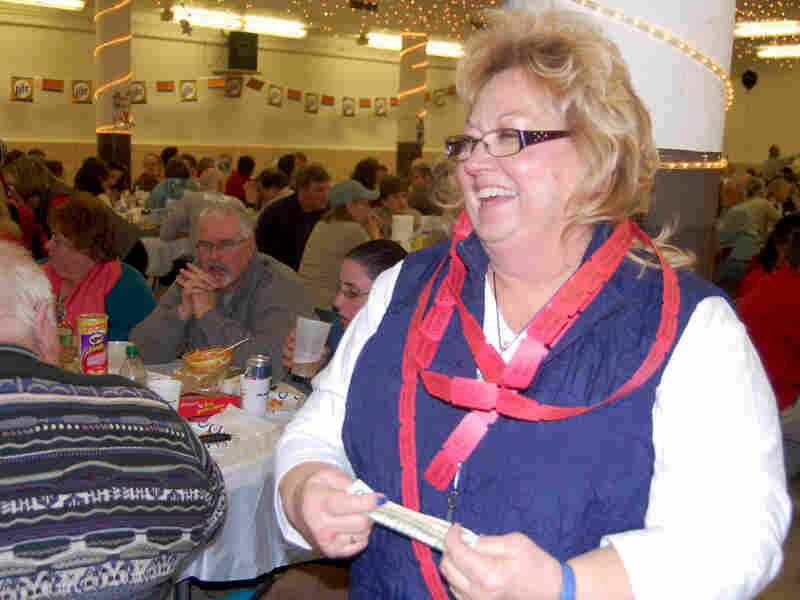 Raffles are a good way to raise money, with winners and the house splitting the pot. Mary Tevlin, who teaches art, gets ready to buy more tickets at St. Rita's trivia night. Alan Greenblatt/NPR hide caption

1) Wrigley's Juicy Fruit Gum. 2) The Huxtables on The Cosby Show. 3) John Dillinger. 4) Terry Gilliam. 5) El Greco. 6) "Mine" (From Abbey Road): "Her majesty's a pretty nice girl and someday I'm going to make her mine, oh, yeah ... someday I'm going to make her mine." Although Let It Be was the last Beatles album to be released, Abbey Road was the last album recorded by the group. 7) Graceland. 8) My Left Foot. 9) Pilots. 10) Underground and underfund.

Some trivia fundraisers are massive. This Friday, St. Patrick Center, which provides services to the homeless, will host its annual sports trivia championship, filling the floor of a college basketball arena.

Most are more modest affairs, like St. Rita's — 200 to 300 people showing up to support their parish or their kids' school.

But because it costs very little to put on a trivia night, the proceeds from entrance fees and side auctions and raffles are almost pure profit. The Vinita Park church cleared about $6,500 from its game Saturday, according to organizers.

"It's generally pretty easy, considering the amount of money you get out of it," says Howard Granok, coach of the chess team at Crossroads College Preparatory School, which is hosting a trivia night this Saturday. "It beats selling cookies or candy bars."

We're Having A Party

If nonprofit groups do well giving out small prizes for trivia proficiency and auctioning off donated sports memorabilia and coupons for restaurant meals, it's still an affordable night out for the players who show up.

Entrance fees vary but generally run in the $15 to $20 range. For that, you get about three hours of play (there are almost always 10 rounds of 10 questions) and, quite often, free popcorn and beer.

Supporting good causes has become a good excuse for St. Louisans to get together with their friends, putting together a table of eight or 10 and making a party of it.

Most tables are larded with large amounts of booze and snacks — often store-bought trays and plenty of pizza. Crock Pots and blenders plugged in at the table are not uncommon.

"It's not a group of nerds," says Kevin Carbery, another regular trivia host. "It's a group of people who want to eat and drink and socialize."

The Trivia Behind Trivia

In St. Louis, getting asked to buy a seat at a trivia fundraiser for a day care center attended by a friend's niece is a routine part of the social currency. Any given weekend will see 25 to 40 different "trivias," as some locals call the events.

Trivia nights took root in St. Louis back during the Trivial Pursuit era of the 1980s. According to a 1993 article in the St. Louis Post-Dispatch, a local couple, Pete and Judy Johnson, brought the idea back from Australia, where Pete had worked on an engineering project and trivia had long since migrated out of bars and into the fundraising bloodstream.

After the Johnsons organized a trivia night fundraiser for Kennerly Elementary School in St. Louis County, the idea spread throughout that district, then to local churches and on from there.

"I'm kind of waiting for the other shoe to drop and for people to say, 'We've had enough trivia,' " says Bill Clevlen, who took over Strauss' radio program. "But it's not going away. It's actually getting bigger." 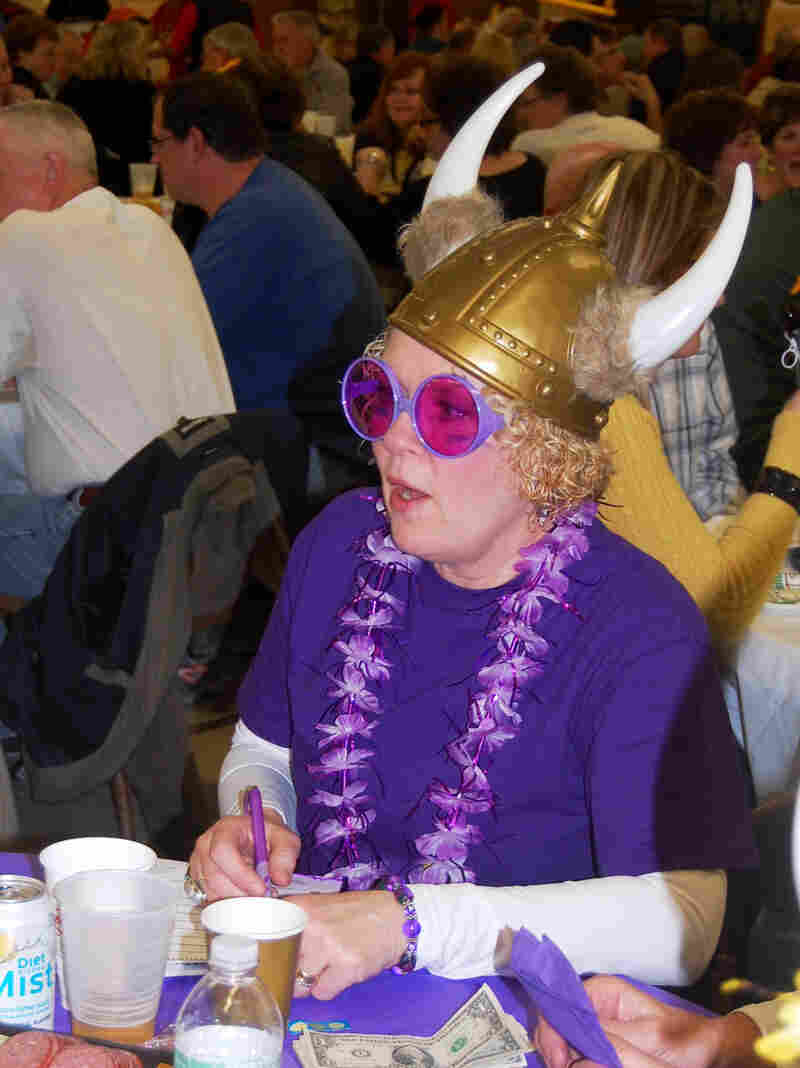 Not everyone dresses up for trivia night, but since her table at St. Rita was named for the Minnesota Vikings, Laura Mueller couldn't resist. Alan Greenblatt/NPR hide caption

Not Exported From St. Louis

As Clevlen points out, the idea of spending an evening with friends playing trivia at a fundraising event may have become a constant in St. Louis, but it's a "foreign concept" everywhere else.

"My friends who have moved — to Houston, Atlanta, Kansas City — have tried to get it started at churches or other organizations," says Carbery, the trivia host and columnist. "But people where they're trying to do it think it sounds boring, and it doesn't go any further."

In a way, it's surprising that the idea hasn't spread. It's an easy, turnkey fundraiser with little overhead. Some groups have to rent a space, but for most it's a matter of soliciting donated auction items, setting up a sound system and hiring a host.

The hosts usually charge about $200, making some nice cash on the side but turning their spouses into "trivia night widows," as Dillon says.

They put together all the questions — trivia books and the Internet are both unreliable sources, they say — and generally take the heat off the organization when some know-it-all with a smartphone questions the answer.

"It's nice to hand it off to somebody," says Karin Moody, community affairs manager for Food Outreach. "Especially if it's a fundraiser, you don't want people mad at your organization."

Moody says her group, which provides food to people living with HIV/AIDS and cancer, expects to clear $10,000 from its trivia fundraiser this Friday.

For small charities with a low profile, the trivia craze in St. Louis has proven to be a godsend.

"Our particular parish was on the ax to be closed," says Bonny Giovanni, a longtime organizer of St. Rita's trivia nights. "This has really saved our parish."