Accessibility links
Interview: Mary Blume, Author Of 'The Master Of Us All,' And Robin Givhan In the '40s and '50s, Cristobal Balenciaga was an international fashion star — but a lot has changed since then. Fashion writer Robin Givhan says today's fashion world demands that designers "have the personality of a celebrity." That may not have gone over well with the secretive Spaniard. 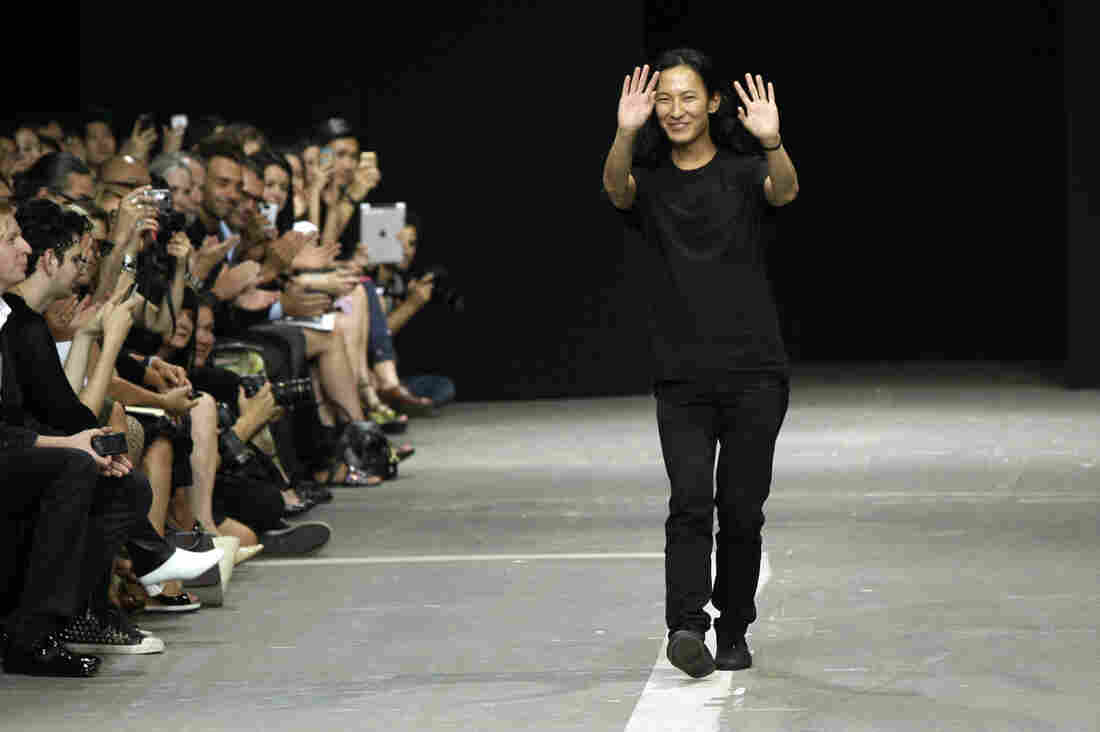 Balenciaga hired Alexander Wang as its new creative director in December 2012. While the fashion house's namesake was known for staying out of the public eye, Wang's public image is very much a part of his designs. Richard Drew/AP hide caption

As New York Fashion Week looks ahead to fall 2013, we're taking a moment to look back at one of the 20th century's most well-known designers — and how life as a designer has changed since his time. 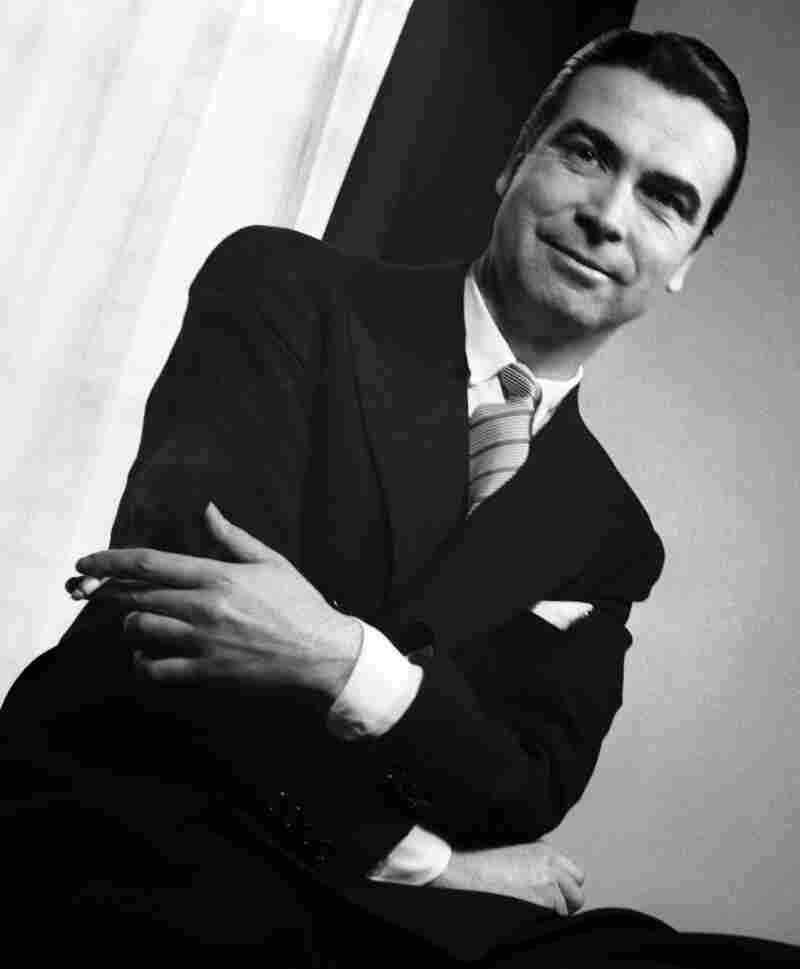 Cristobal Balenciaga was known as a perfectionist, especially when it came to sleeves. Blume says, "It was perhaps a sign of real personal attention if you were one of the rare clients that he had lunch with, and at the end of the lunch he ripped out [your] sleeve and reset it." Francois Kollar/AP hide caption 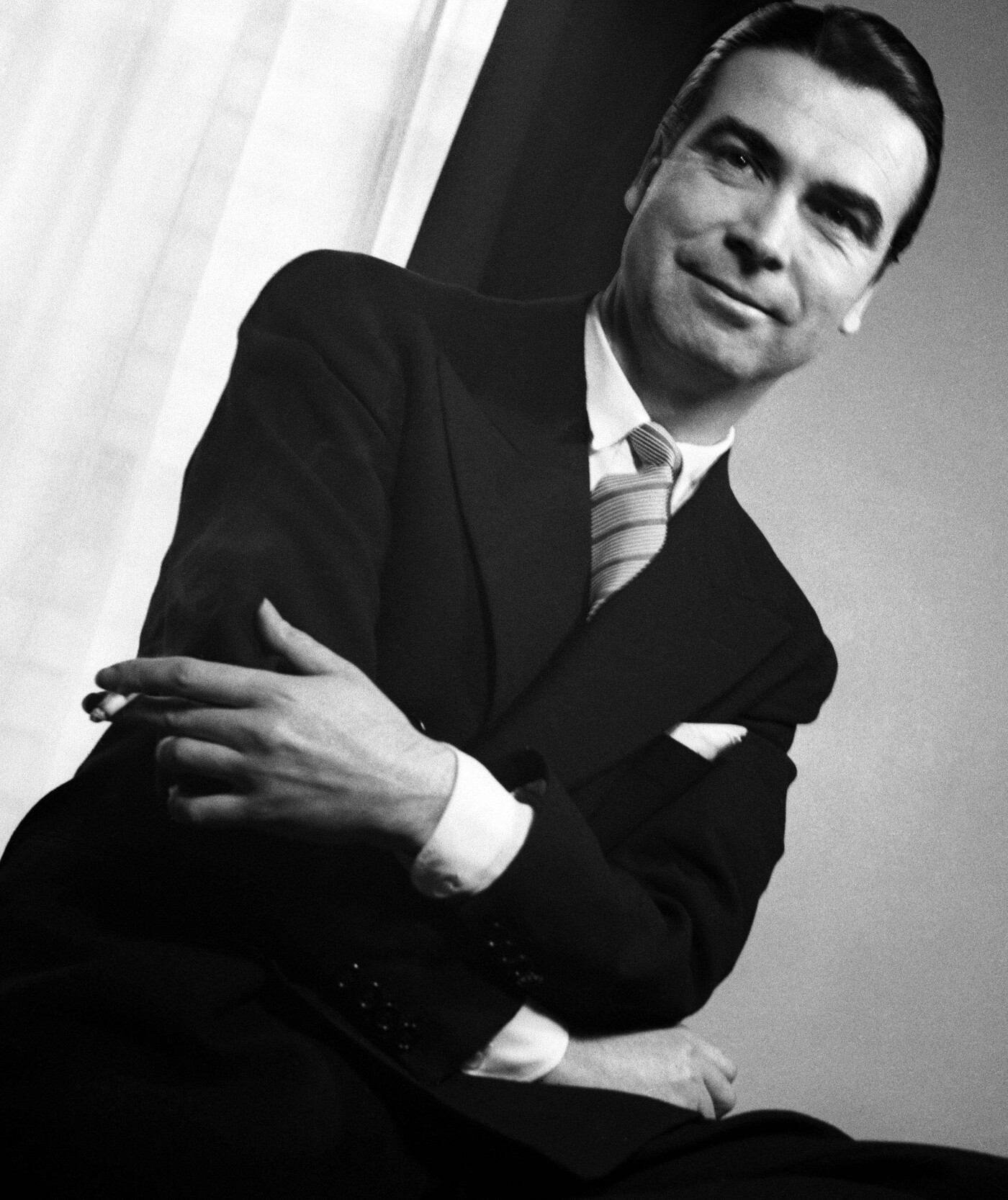 Cristobal Balenciaga was known as a perfectionist, especially when it came to sleeves. Blume says, "It was perhaps a sign of real personal attention if you were one of the rare clients that he had lunch with, and at the end of the lunch he ripped out [your] sleeve and reset it."

In the 1940s and '50s, Cristobal Balenciaga, the son of a poor Spanish seamstress, crafted the most sought after bell-shaped coats, feathered pencil skirts and tunic dresses. He became an international fashion star, but according to Mary Blume, a journalist and author of The Master of Us All: Balenciaga, His Workrooms, His World, he had no interest in being one. Balenciaga designed clothing for more than 30 years before closing up shop in 1968. He died just a few years later, but the Balenciaga label was revived in the 1980s. Today, it's part of a billion-dollar fashion conglomerate.

Late last year, the label brought on a new creative director, 28-year-old Alexander Wang. Known for wearing his personality on his sleeve, Wang isn't someone you'd expect to follow in Balenciaga's footsteps. But then, today's fashion world isn't what it was in Balenciaga's time.

Blume: "No no. What he really wanted to do was work. And for a man who did maybe 150 fittings a day, there wasn't much time or energy for what he regarded as nonsense. He was not part of the social world; he was not, incredible as it may seem now, a celebrity designer."

Givhan: "He was known for bounding down the runway after a show, and in some instances you almost felt like the post-show celebratory party was as important as the show itself." 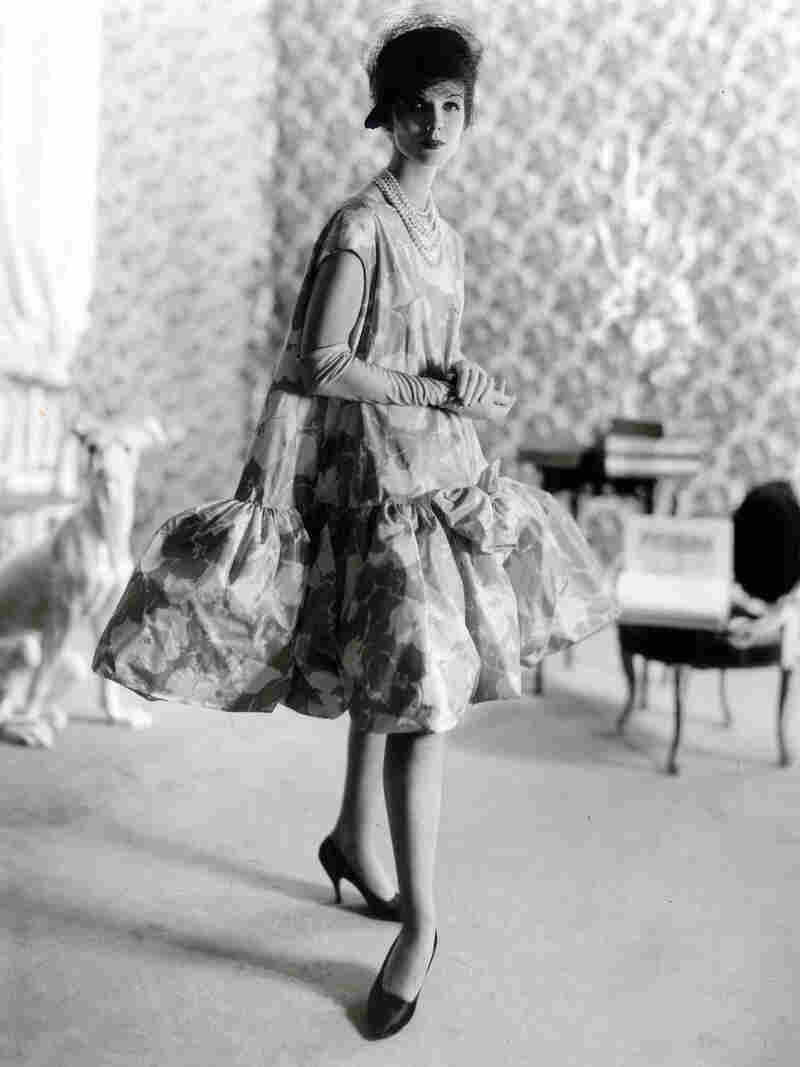 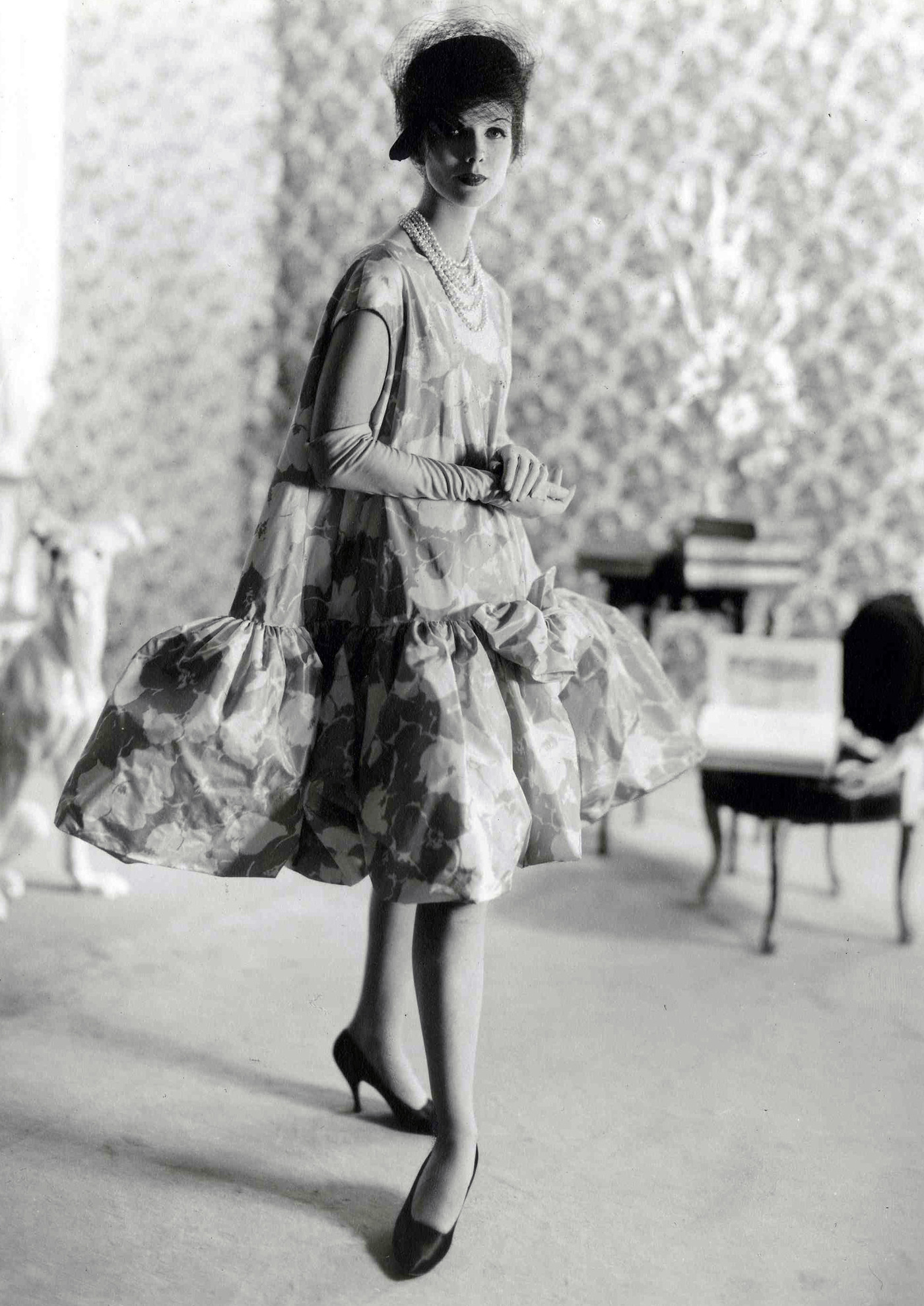 Balenciaga debuted his baby doll dress in 1958. Blume writes, "all women benefited — and benefit still — from the principal achievement of [Balenciaga's] 1950s lines: the elimination of a tight nipped-in waist and the smoother, more yielding silhouette."

On Balenciaga's public image and style

Blume: "Nobody knew how tall he was, if he was slim or fat or — several French journalists thought he wasn't one person but that he was a team of designers. And this is simply because he did not appear. ...

"In addition to the glamorous clients, the people he really liked to dress — very, very odd — was short, fat, middle-aged women. He enjoyed working on the body and didn't like any kind of constriction. His suits never clung to the body — they sort of shadowed it, if one can say that. And Balenciaga's look, if you can limit it to anything, is a grand look. His perfectionism was an inspiration."

On Wang's style and public image

Givhan: "I don't think you can separate his persona from his fashion because they are intimately connected. I mean, Alexander Wang is someone who — one of the first shows I remember seeing of his, all I kept thinking was his models look like they were doing the walk of shame after a night of partying. I mean, these clothes were meant to look like they were these disheveled garments worn by young women who had spent the night at a club and you could almost smell the stale cigarette smoke wafting off of them as they came down the runway. ...

"The other thing about Alexander Wang is that people very quickly got a sense of his personality."

On what it means to be a creative director, or designer, today

Givhan: "The creative director is not just someone who's creating the clothes, but its someone who's thinking about marketing and advertising and stores. And their job is much much broader and much more complicated than it ever was.

"No longer can they sort of sequester themselves in the salon and sit in front of a sketch pad or in front of a mannequin and drape fabric, but they really have to be out there. I mean, they have to bring the brand's name into our daily conversation. And I think that's an enormous burden on a designer because it requires that not only are you this creative person, but you also have to have the personality of a celebrity. I mean, you have to be someone who wants to do the interviews, who wants to walk the red carpet, who wants to make the witty repartee at a cocktail party, who wants to, in some ways, reveal a lot about their personal selves."

On what makes a successful designer today

Givhan: "If you look at the names that we know, the designers we feel we have some kind of relationship with, we do tend to think of people like Ralph Lauren or Giorgio Armani. And what I think is interesting about these two in particular is ... they've been really good — and I would also put Calvin Klein into that category — they've been really good about making this seamless connection between their work, the lifestyle they're advocating and the life that they lead. And we think that they're one [and] the same. And you know, I contrast that with someone like a Karl Lagerfeld, who is sort of the rock star designer but it's more driven solely by the personality. ...

"He is definitely, sort of, the quintessential celebrity designer. But I don't know that that necessarily makes him the most, sort of, successful at exploiting the idea of celebrity and making it pay off for the brand."

On how Balenciaga would get by in today's fashion world

Givhan: "I think that he might be a frustrated designer in the sense that it is frustrating to know that you're putting out your best work and to know that you are incredibly appreciated by your colleagues but that the public doesn't seem to get it because it's not filled with bells and whistles and glitter and smoke and mirrors and all the things that make fashion fashion today."

Read an excerpt of The Master of Us All