Accessibility links
For Some In Minneapolis, National Gun Debate Hits Close To Home Earlier this week, President Obama was in Minneapolis advocating new limits on guns; no law or set of laws, he said, can keep children completely safe. NPR's David Welna sent this reporter's notebook about what he heard from some of those engaged in the gun debate in his home state. 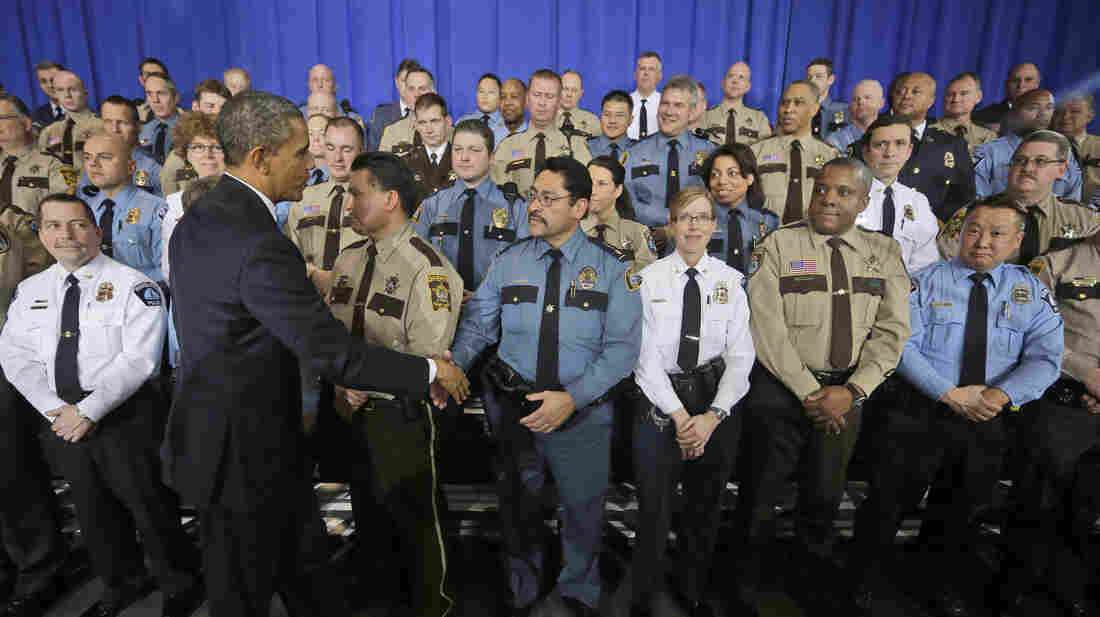 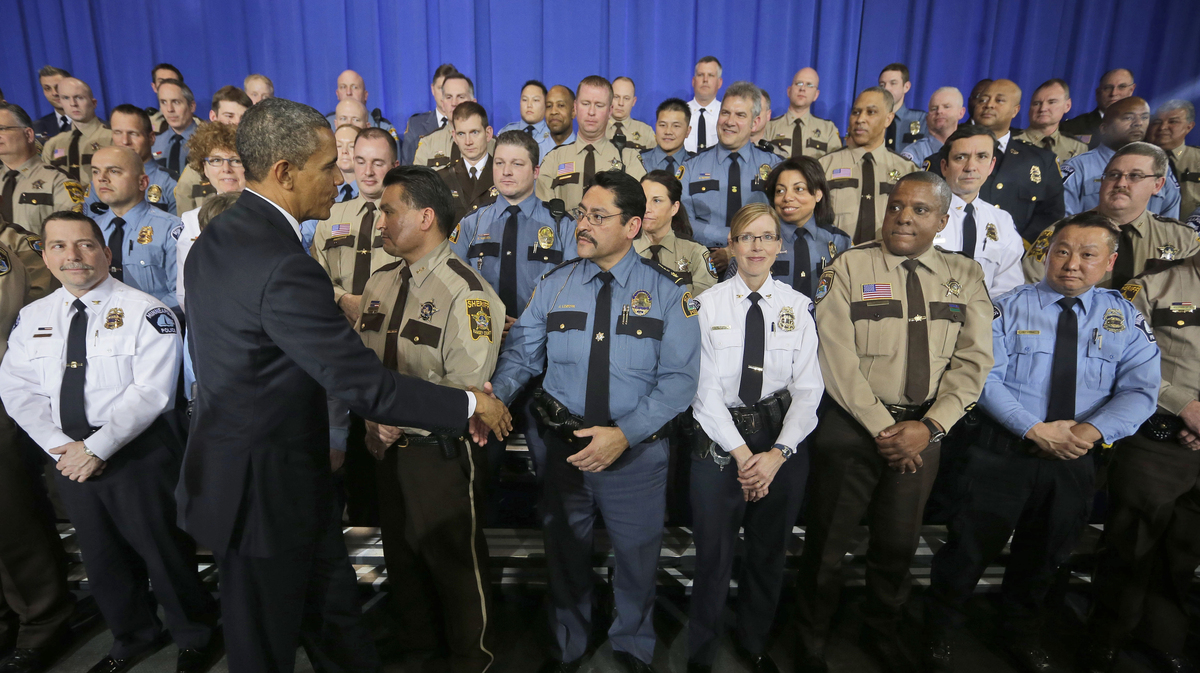 The shooting massacre at Sandy Hook Elementary in Newtown, Conn., in December revived a national debate about gun violence. It's one that is emotional and often highly personal, and it's happening in places far from the halls of Congress. Earlier this week, President Obama was in Minneapolis advocating new limits on guns; no law or set of laws, he said, can keep children completely safe. NPR's David Welna was there for the visit and sent this reporter's notebook about the voices he encountered.

In the Minnesota where I grew up, angry arguments would sometimes come to bloody blows, but seldom to bullets.

"There are definitely problems with guns; a lot of stolen guns end up in the hands of kids in the community," North Minneapolis resident Dale Hume said outside the police building where the president spoke. A big sign next to him read: "Congress: Protect our children, not the NRA."

Even In Blue Minnesota, Gun Control Seems A Tough Sell

I asked Hume, a local pastor, whether gun violence was as bad as in the mid-'90s, when this city was known as "MURDERapolis."

"It's better now, but it's still bad," he said. "[But] then when you know some of the people that get shot and killed, then it's different ... then it doesn't seem to be going away."

Hume said one of the kids in his youth group was shot and murdered across the street from his church, St. Olaf Lutheran.

At the Obama event, Leigh Ann Block of St. Paul told me she got restraining orders eight years ago against her ex-husband that kept him from buying a gun. But he borrowed a 9 mm pistol from a friend and then took their daughter for an outing.

"He rented a car, drove to a rural road in Wisconsin, waited for my daughter to fall asleep, and then he shot her in the head and shot himself," she said, choking back tears. "She was only 5." 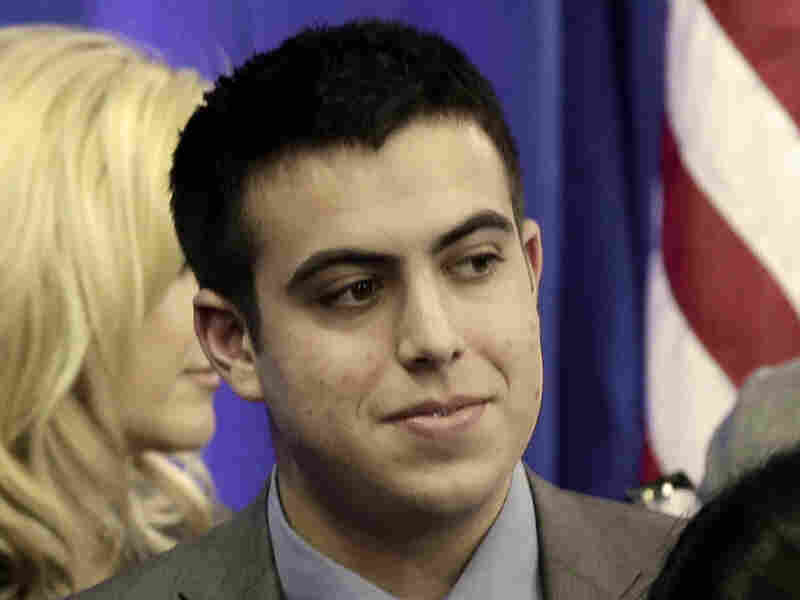 Sami Rahamim, 17, has embraced a public role speaking against gun violence in the months since his father and four others were slain at a sign business in Minneapolis. Jim Mone/AP hide caption 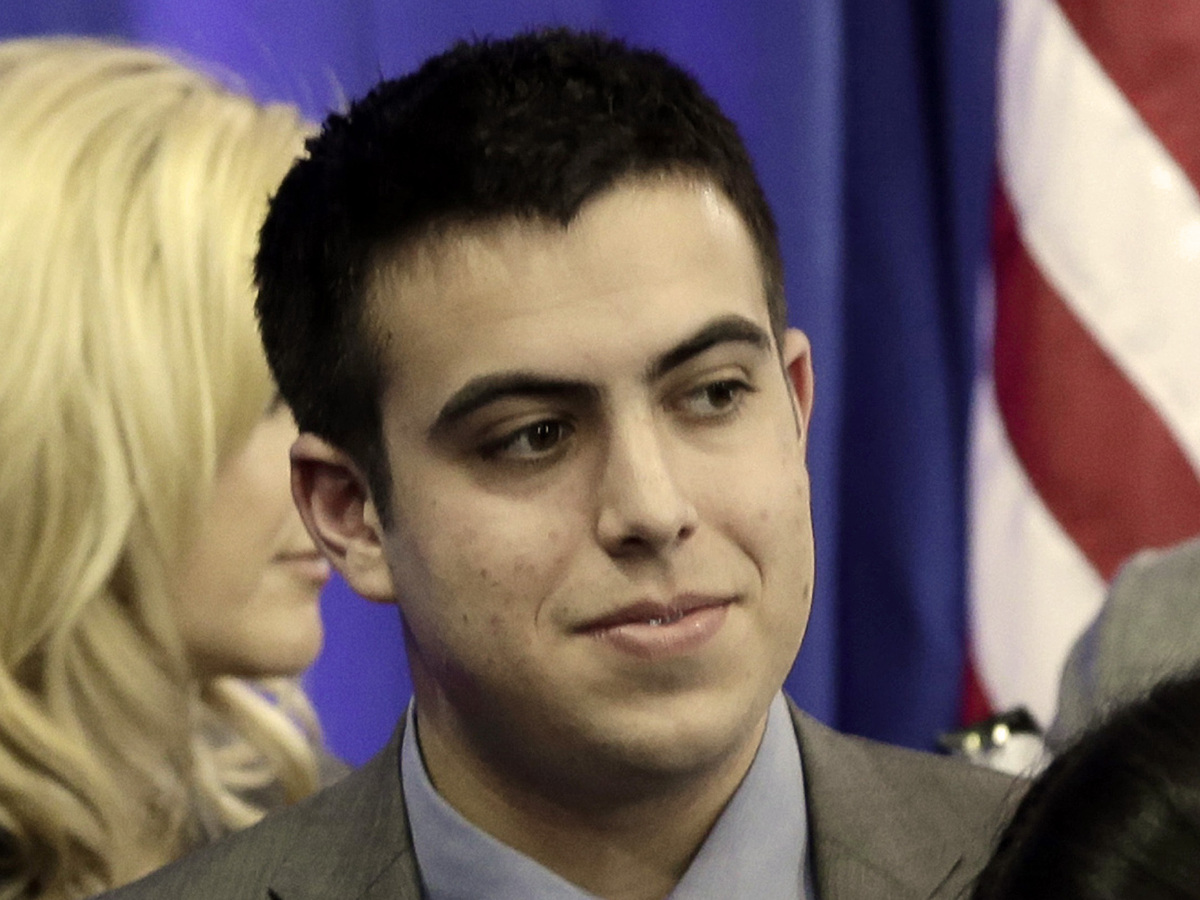 Sami Rahamim, 17, has embraced a public role speaking against gun violence in the months since his father and four others were slain at a sign business in Minneapolis.

Block said that up until now she couldn't speak about guns or even listen to talk about them. Every time somebody would mention a gun she would cry, she said.

"I still think about my daughter," she said, "and right now I am here for the cause of trying to promote safety. I can't save my daughter, but I want to speak on behalf of other people who are going through situations that [we] went through."

The next day at the state Capitol, 17-year-old Sami Rahamim spoke at a hearing on gun control. He described how his father and five others were murdered last fall at a Minneapolis sign company. The dismissed employee used a Glock semiautomatic pistol. Later, I asked Rahamim whether he'd ever thought before about limiting guns.

"No, the gun issue wasn't something that had quite crossed my desk yet until it touched me in such a personal way that I absolutely had to get involved," he said.

At the same hearing, I talked with Republican state Rep. Tony Cornish, who calls himself "an unapologetic member of the NRA" and proudly wore a lapel pin of an AK-47.

"I have like 47 firearms at home; I'm proud of each one of them [and] I use them correctly," he said. "It's just a sporting rifle; I hunt with it. It's legal for deer, and so I figured why not wear it. Why be frightened to wear a gun just because it's used in crime? There's a lot of guns used in crimes."