Accessibility links
Raising Personable Children, Even If They're Glued To Phones Technology is ever-present in the Jordan household. But Sue and David also want to make sure their five kids know how to relate to each other in person.

Weekend Edition Sunday is taking a look at how technology affects personal relationships. Along with romantic and workplace connections, family dynamics are shifting.

The Jordans are a classic example of a family trying to figure out how to use technology without feeling disconnected from one another. Sue and David have five kids: two off at college and three still at home.

On a Friday night, they're just finishing up a couple of delivery pizzas. They have laptops, and everyone has a cellphone, though only mom and dad and the oldest kids are allowed to have smartphones. They also have an iPad that everyone shares. Sue uses it most to connect with her daughter, Kelly, who is at college in Pennsylvania. 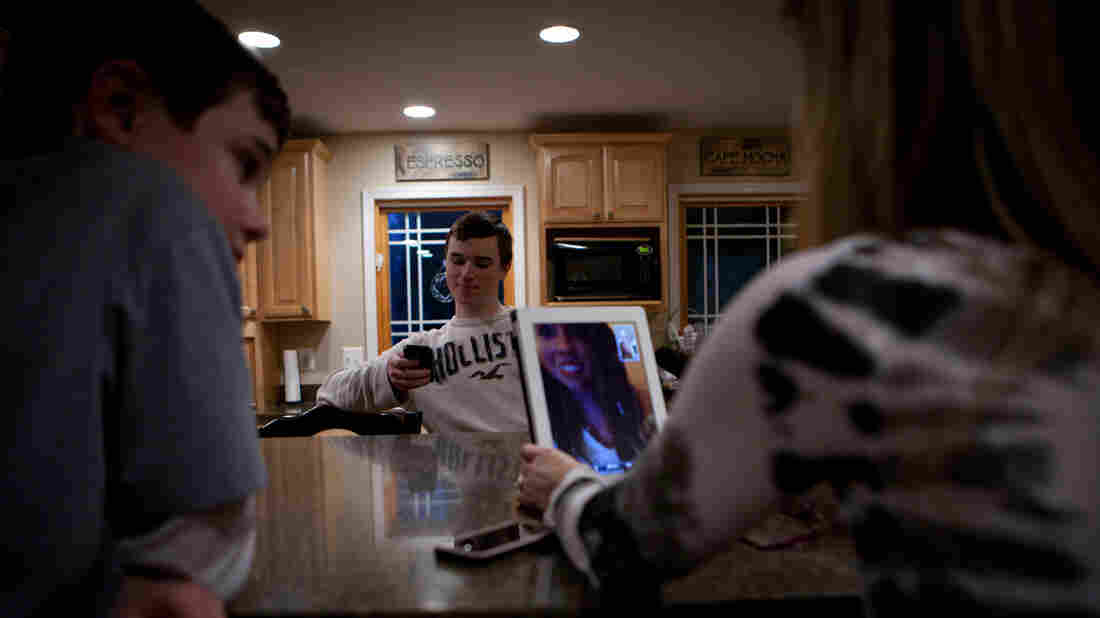 The Jordans use an iPad to talk to their daughter, Kelly, who's at school in Chicago. Marie McGrory for NPR hide caption 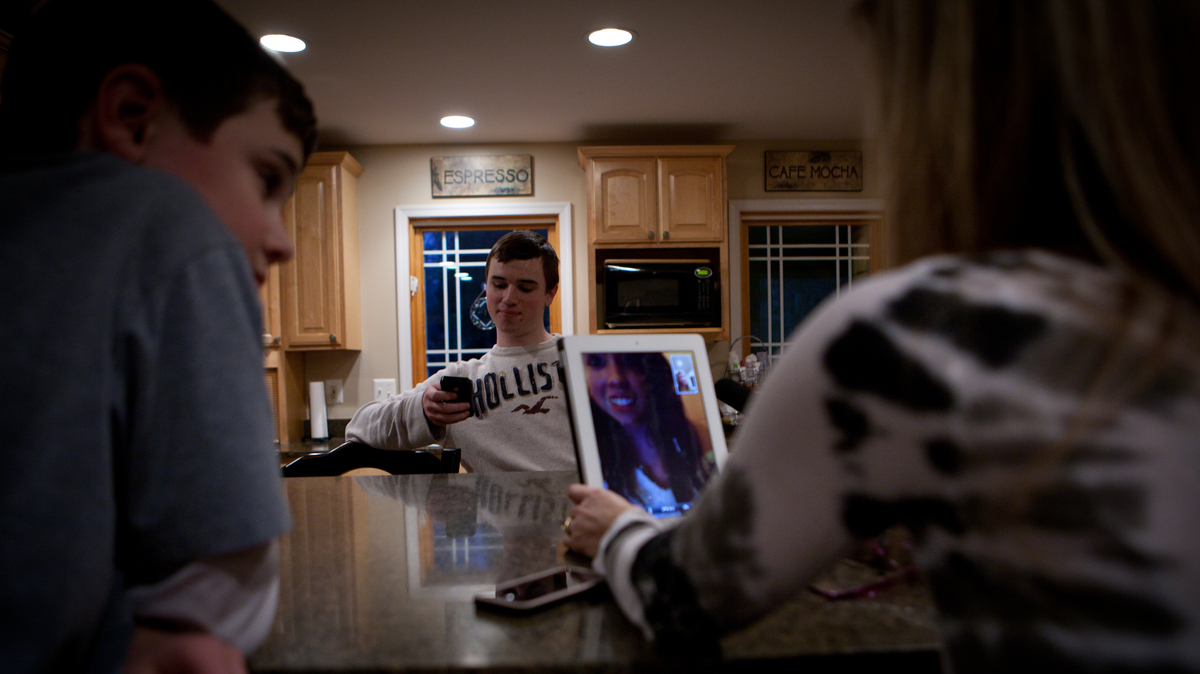 The Jordans use an iPad to talk to their daughter, Kelly, who's at school in Chicago.

Kelly is a texting fiend. At one point when she was in high school, she was sending around 15,000 texts a month. Her parents had to take her phone away for a while as punishment.

The Jordans don't allow their two youngest kids — 11 and 13 years old — to be on Facebook. But they don't put limits on cellphones. The kids can use them at any time, and while they're talking around the kitchen table, 16-year-old Brian is quietly tapping out messages on his iPhone.

"The biggest limitations that we talk about all the time is just making sure that our kids still interact with each other, and [are] articulate in conversation with adults," Sue says. "And with our oldest son interviewing for jobs and things like that, we wanted to make sure that they had good eye contact." 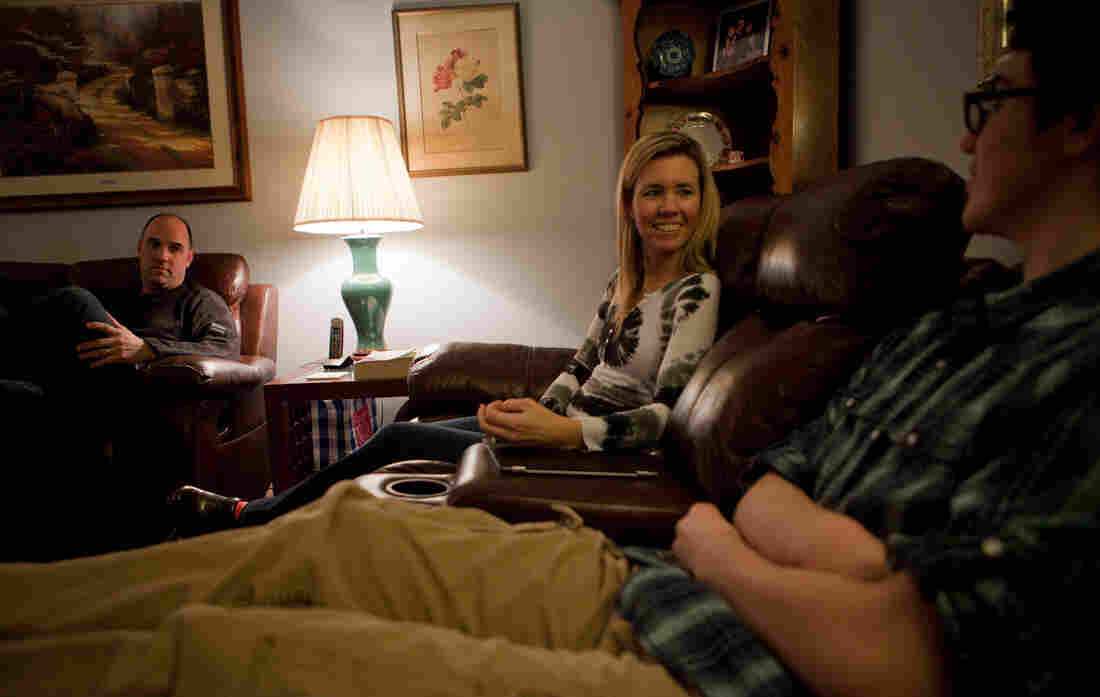 David and Sue Jordan talk to their son, David, 13. Making sure their children can still hold a conversation with adults and maintain eye contact is highly valued. Marie McGrory for NPR hide caption

As David often tells his kids, "It's a mix between having the technology, but you still have to be able to relate [to] and interact with people."

Sue says the technology has affected how much information they get from their children.

"Things can happen so quickly ... they can come home happy, and then all of the sudden things are upset because there was an exchange on the phone or something that you're not aware of," she says, adding, "You have no idea how fast their world's going." 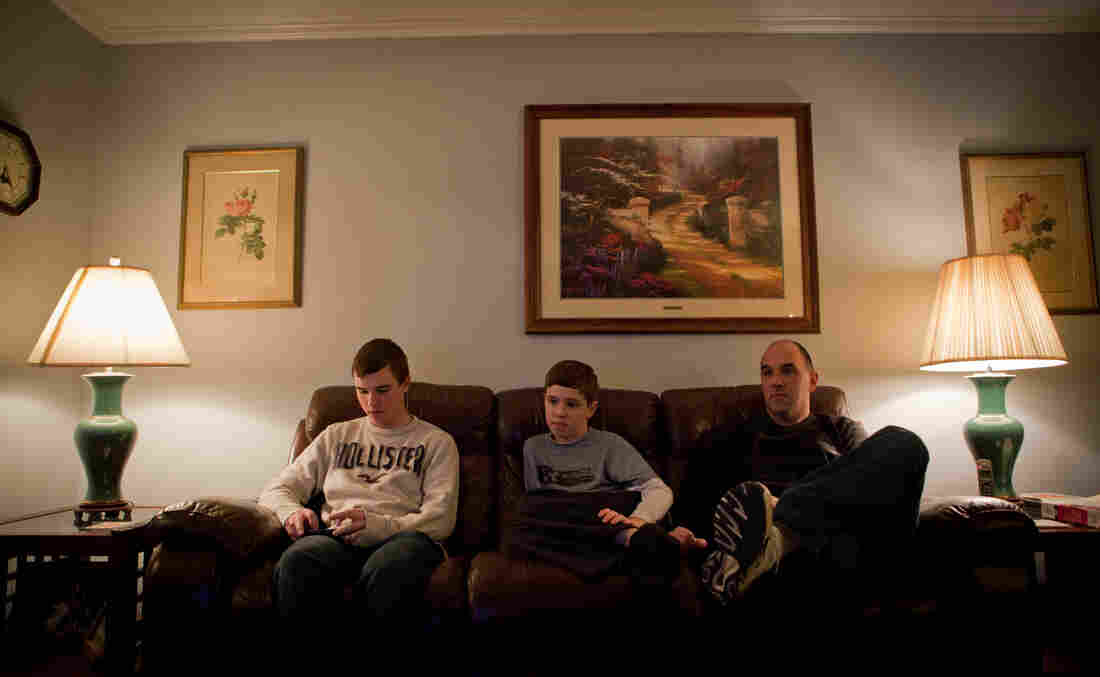 The Jordans settle into a Friday night ritual. They sit down into the living room with the TV on. Sue's oldest son, Brendan, calls from Chicago.

The two younger boys fidget on the couch. David surfs through the channels, and Brian sits at the far end of the couch, still tapping out messages on that iPhone.