Accessibility links
As Islam Grows, U.S. Imams In Short Supply The more than 2,100 American mosques are facing a challenge. There aren't enough imams, or spiritual leaders, to go around. 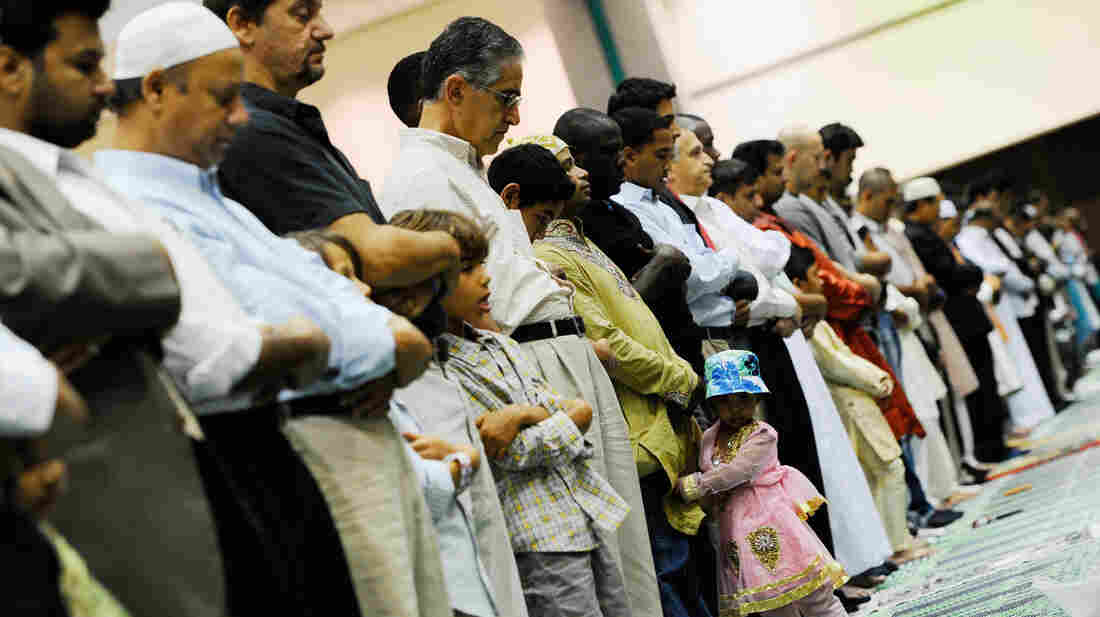 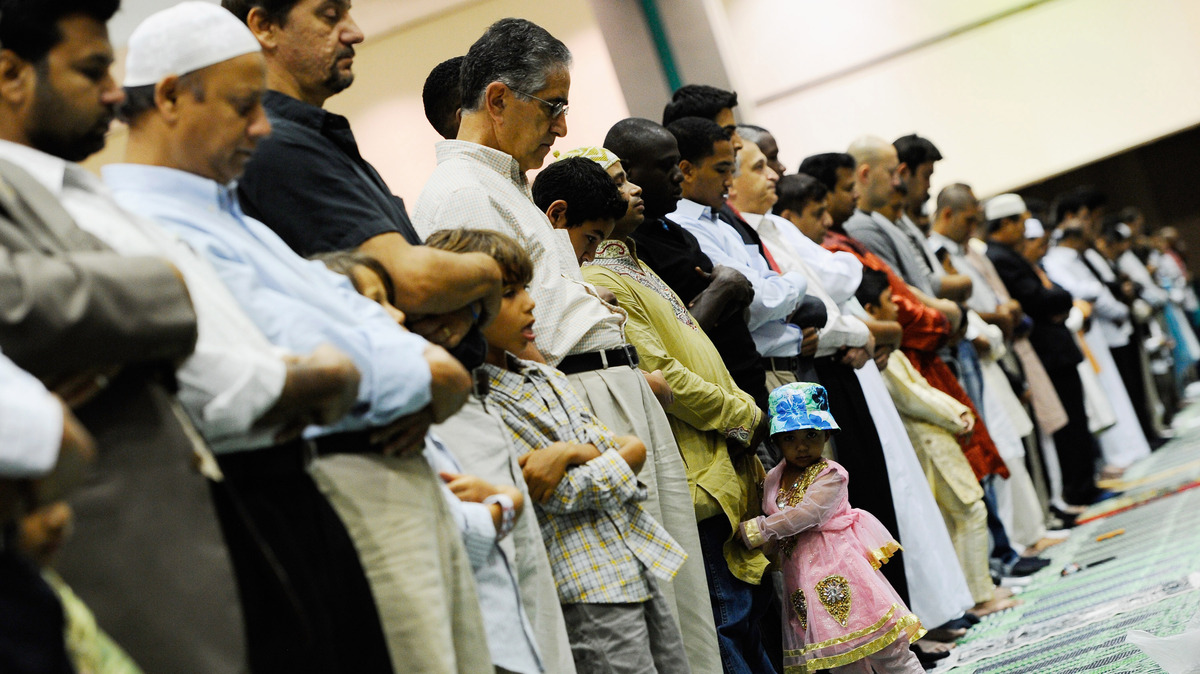 Muslims pray during a special Eid ul-Fitr morning prayer at the Los Angeles Convention Center on Aug. 30, 2011, in Los Angeles.

Islam in America is growing exponentially. From 2000 to 2010, the number of mosques in the United States jumped 74 percent.

Today, there are more than 2,100 American mosques but they have a challenge: There aren't enough imams, or spiritual leaders, to go around.

The Mid-Cities Mosque in Colleyville, Texas, has two modest minarets that distinguish it as a sacred building here in this sedate suburb between Fort Worth and Dallas. It's trimmed in green lights — the color of Islam. A Dallas Muslim Yellow Pages sits in a rack outside the doors.

Inside, maghrib prayers, after sunset, are commencing. A husky young imam dressed in a sand-colored tunic closes his eyes and leans into a microphone. A dozen men stand barefoot, elbow-to-elbow on a green carpet, in quietude.

The 200 mostly Pakistani-American members of this small Texas mosque are lucky to have a full-time, American-born imam. There's an acute imam shortage in America, the result of supply, and demand, says Nouman Ali Khan.

"I've had the opportunity to travel to maybe 150 mosques across the country. And the vast majority of them, actually, did not have a full-time imam," says Ali Khan, who heads Bayyinah, an Arabic-language institute in Dallas that educates future imams. "The ones that did are very happy to have them and the ones that didn't are constantly asking me when I go for a seminar, 'Hey, so you know anybody?'"

Separated geographically from the rest of Islam, he says American Muslims must find their own way, must invent their own traditions.

In Islamic countries, mosques and imams are supported by the state. Here in the U.S., they are private just like any church. Moreover, they are likely to serve as religious and community centers for their ethnically distinct congregation.

Indeed, American mosques are filled with Muslims from many different countries. And increasingly they're the spiritual home of native-born Muslims whose identities are completely American.

Some young Muslims feel alienated from the mosque and from religious culture altogether. So U.S. mosques not only need imams trained in classical Islam, but who possess good English skills and a thorough understanding of American culture.

"You may have a scholarly religious figure that can speak to the older congregation, but he's not able to connect as well with the youth," Ali Khan says. "And in a lot of the interviews, it's even sort of a primary concern how well can you connect with the young in our community."

The Islamic Association of Mid-Cities went without an imam for 15 months before it finally chose Yahya Jaekoma. He's a cherubic, 23-year-old of Thai and Afghan descent, who was born in San Diego.

"I was a sponsored skater at the age of 10 ... and after breaking my arm, my grandmother told me I [had] to put it off," Jaekoma explains. "So she sent me to a madrassa, which is an institute to study the Quran, at the age of 14."

By the time he was 18, Jaekoma had memorized the entire Quran and dedicated his life to religious study. But his time as a hip-hop skateboarder gives him a unique voice for the youth in his mosque.

The youth group at the Mid-Cities mosque includes Sijil Patel, a 16-year-old Pakistani-American who is thoroughly modern with Facebook, Twitter, Instagram, crazy-colored sneakers, and a headscarf.

"By having someone that was born here, it's easier to relate to them, and it's easier for them to understand our view on what we're dealing with and, like, the difficulties we have with our faith in, like, such a modern environment," Patel says.

Some of those things include dating, sex, drugs, alcohol and profanity.

"We've been strictly taught in Islam that vulgar language is not allowed," Patel says. "I try my best to, like, not engage in that type of thing, and I've told my friends, too."

A recent survey by the Islamic Society of North America reports that only 44 percent of American imams are salaried and full-time. The rest are volunteer religious leaders. Four out of five imams here were born and educated outside the United States, mostly in Egypt, Saudi Arabia and India.

"I can count the number of institutions that prepare imams in the U.S. on three fingers," says Jihad Turk, president the Bayan Claremont Islamic graduate school in Southern California.

Turk estimates that his institution, Hartford Seminary in Connecticut, and Zaytuna College in the San Francisco Bay Area will, collectively, graduate fewer than 30 Koranic scholars this year.

This handful of newly minted American imams should have no trouble at all finding work.