Accessibility links
To Infinity And Beyond: Would-Be Astronauts Keep Faith In Uncertain Era As NASA moves away from manned missions, the private sector is taking on the task. Those hoping for a ride are as eager as ever, and space exploration hasn't lost a bit of its luster. 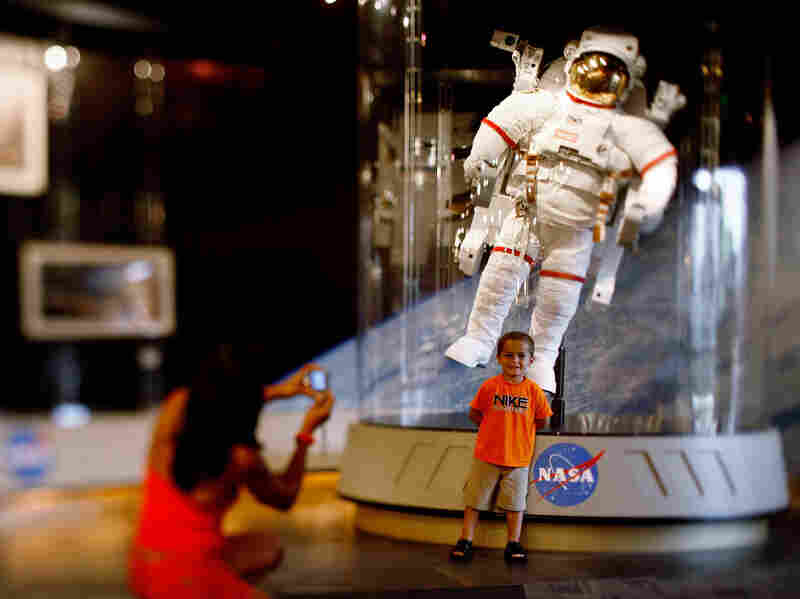 A child poses for a picture in front of an astronaut space suit at the Kennedy Space Center on the eve of the launch of Space Shuttle Endeavour July 14, 2009 in Cape Canaveral, Fla. Chip Somodevilla/Getty Images hide caption 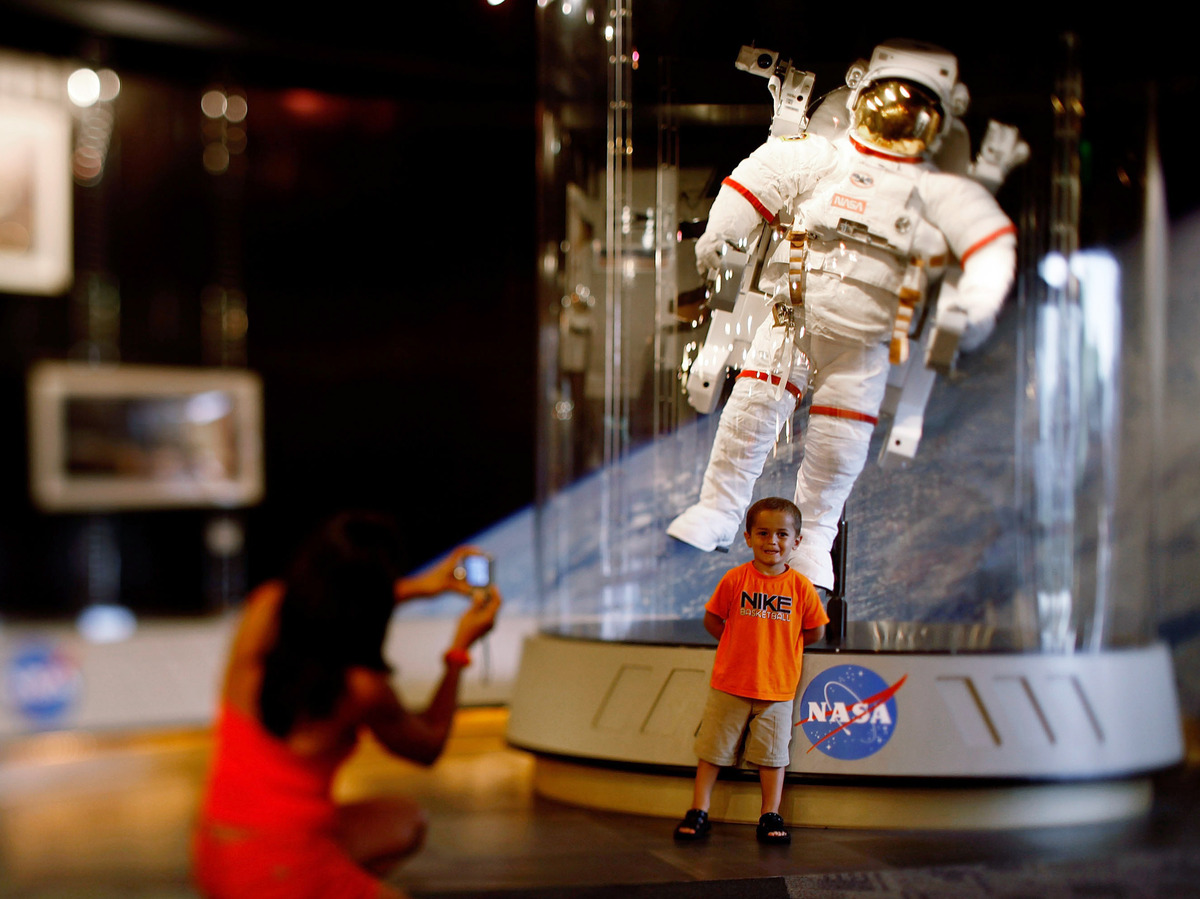 A child poses for a picture in front of an astronaut space suit at the Kennedy Space Center on the eve of the launch of Space Shuttle Endeavour July 14, 2009 in Cape Canaveral, Fla.

Space exploration has stirred imaginations and piloted hopes and dreams, but the future of space travel looks very different from the age in which Neil Armstrong made it to the moon.

Since NASA is no longer doing manned missions, astronaut hopefuls have turned their sites on the private sector.

Elon Musk, CEO of Tesla Motors and SpaceX, is one example of space entrepreneurship. He's been investing in private rockets and spaceships, leading two missions to the International Space Station in 2012.

Richard Branson, the owner of Virgin Airlines, has founded a private space company of his own called Virgin Galactic. He says he hopes to open a spaceport in New Mexico for tourists later this year. He'll offer a six-minute, weightless ride into space.

A slew of other private companies are building and testing spaceship prototypes to carry people and cargo, all in the hopes that space exploration will be profitable.

John Grunsfeld, a retired astronaut and associate administrator for science at NASA, says this is all just as it should be. He says it's a natural evolution — a sort of seed company spinoff from NASA.

"The reason they're successful is because we've had 50 years of investment in learning how to explore space," he tells NPR's Jacki Lyden.

The technology that's been developed over the years by NASA is now being used in the private sector.

"When they are successful, it will make our space program stronger and also provide an economic engine for the country," Grunsfeld says.

Eyes On The Stars

For astronaut-hopeful Brian Shiro, these private companies may be his best hope of getting off Earth. Shiro, 34, has wanted to be an astronaut since he went to space camp in middle school. The geophysicist has the skills: math, science, multiple marathons.

He's invested all his vacations and free time to training, and he has a blog, Astronaut for Hire. He's even experienced zero gravity in a centrifuge in a NASA-sponsored training exercise.

He has applied twice to be a NASA astronaut, but last week he found out he once again didn't make the cut. He's not worried; he intends to become an astronaut with or without NASA. Shiro says he's ready at a moment's notice.

Record-breaking former astronaut Michael Lopez-Alegria says Shiro shouldn't get discouraged. Lopez-Alegria spent seven continuous months in orbit and has done more spacewalking than any other human being. It's not a moment you can relive, he says.

Although he had to meet very specific education requirements to be an astronaut with the government, he expects the opportunity will open up to people with all kinds of expertise.

As Shiro and others look for private-sector opportunities, NASA is shifting its focus, too. The agency's role, says NASA administrator Grunsfeld, is to keep undertaking things like the Hubble Telescope, Mars rovers and other big-concept ideas.

"What we do at NASA is inspiring. It's reaching, it's visionary, and it inspires people on Earth to try hard things," he says. "I think it's really a sign of great American strength that we do invest the money we do in technology, in these hard projects, in NASA."

That investment isn't what it used to be, though.

"Last year, they did take a hit. They had a relatively flat budget of $17.7 billion — that was still $59 million less than what they got in 2012," says Tariq Malik, managing editor of SPACE.com.

NASA had to take hundreds of millions of dollars out of its planetary science projects, he says.

"And this is in a year when they had a spectacular success: They landed the biggest robot on Mars that can move around, the Curiosity Rover," Malik says.

A budget of $17.7 billion may sound huge, but Grunsfeld says it isn't, really.

"Our country ... invests a tiny fraction of 1 percent in NASA, and this is what's so amazing to me," he says, "is with that small investment, we do so much for the country."

President Obama has re-conceived the next big space push: sending astronauts to visit an asteroid by 2025, and then to possibly try for Mars in the mid-2030s. Malik says he thinks visiting an asteroid is gutsy.

"Everyone can see the moon at night. When Obama took office, he scrapped that plan ... to trade with this asteroid one, which they hope will capture the imagination of folks more because it's never been done before," he says.

Malik points out that space exploration is still wildly popular with the public. Last year, NASA got more applicants for the next astronaut training class than ever before. That class will be announced this spring.