Accessibility links
Pope Benedict XVI: A Champion Of Catholic Tradition Pope Benedict XVI, who announced his resignation Monday at age 85, was a deeply conservative pontiff who sought to strengthen the church's core beliefs. But he also faced a number of difficult issues in a rapidly changing world. 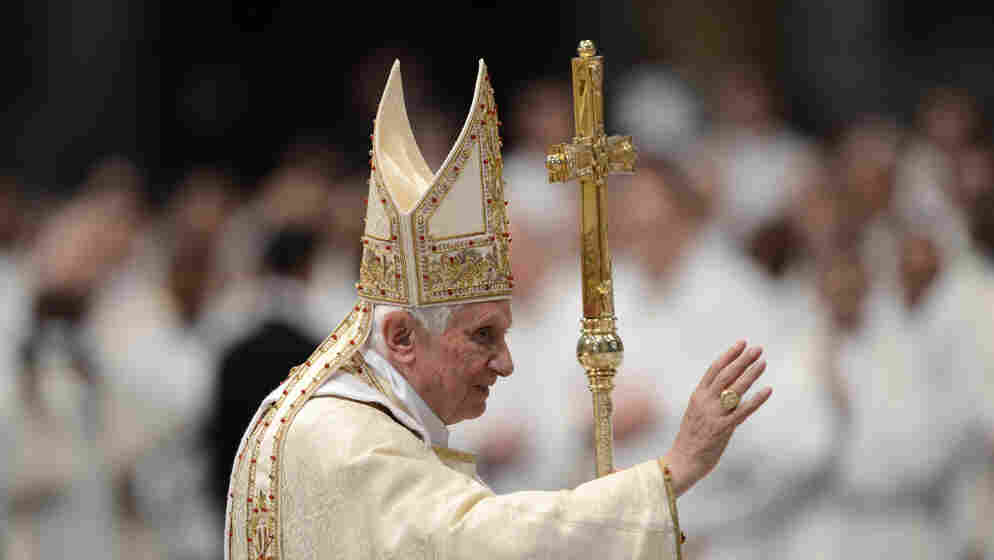 Pope Benedict XVI, who announced his resignation Monday, was an ardent defender of Catholic tradition. For a quarter-century before he become the pontiff in 2005, he served as the chief enforcer of Catholic orthodoxy. Vicenzo Pinto/AFP/Getty Images hide caption 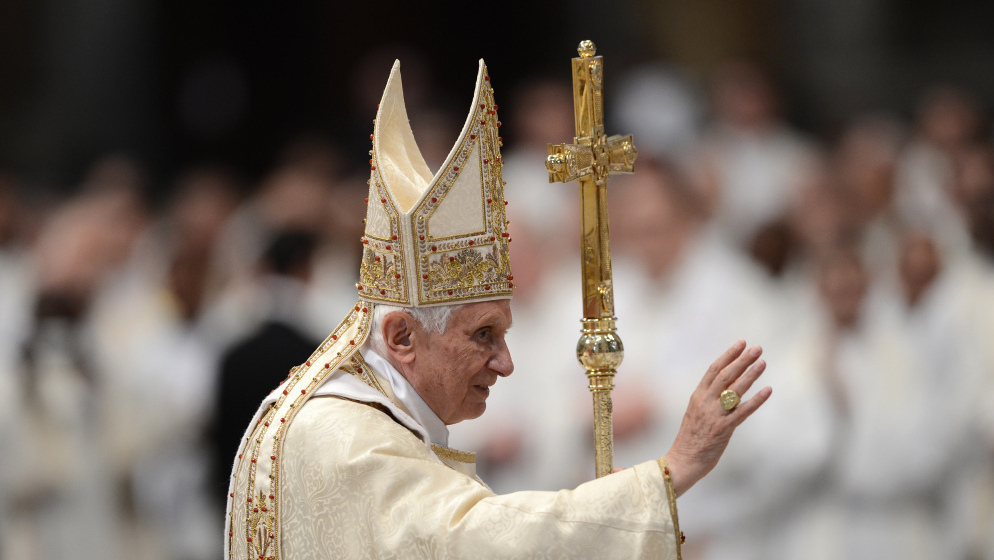 Pope Benedict XVI, who announced his resignation Monday, was an ardent defender of Catholic tradition. For a quarter-century before he become the pontiff in 2005, he served as the chief enforcer of Catholic orthodoxy.

On April 19, 2005, when wisps of white smoke puffed from the chimney above the Sistine Chapel, the Roman Catholic Church had its first German pope since the 11th century.

Just one day before his election as Pope Benedict XVI, Cardinal Joseph Ratzinger delivered a homily that, many analysts later said, became the platform of his papacy.

He denounced modern trends he said were undermining Catholicism and Western civilization.

"We are moving toward a dictatorship of relativism, which does not recognize anything for certain and which has as its highest goal one's own ego and one's own desires," he said.

At the end of February, his tenure will come to an end. The 85-year-old announced Monday that he will resign from his post, becoming the first pope to resign in nearly 600 years.

Nazism And The Catholic Church

Born on April 16, 1927, in Bavaria, Germany, Ratzinger was the son of a police officer and a hotel cook. At 12, he entered a seminary, and in his early teens, at the height of World War II, he joined the Hitler Youth when membership was mandatory.

Drafted in 1943, he served briefly in an anti-aircraft battalion.

Near the end of the war, the 18-year-old deserted but was captured by U.S. soldiers and held for several months as a prisoner of war.

Benedict rarely spoke publicly about his childhood during Nazism or of the Catholic Church's relations with the Third Reich.

On his first foreign trip as pope — to his native Germany — he visited a synagogue and addressed what he called the often painful history of relations between Christians and Jews in Germany.

"In the 20th century, in the darkest period of German and European history, an insane racist ideology, born of neopaganism, gave rise to the attempt, planned and systematically carried out by the regime, to exterminate European Jews," he said. "The result has passed into history as the Shoah."

Ordained a priest in 1951, Ratzinger began his career as an academic and, at the age of 35, he became a theological adviser to the second Vatican Council. 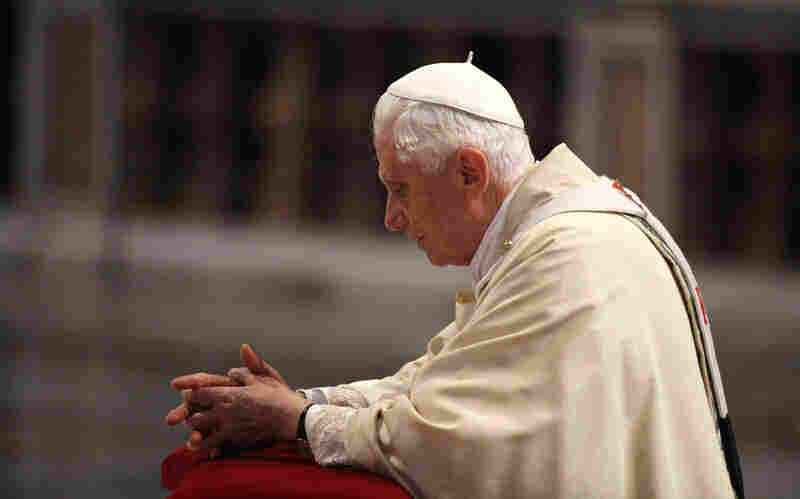 Pope Benedict XVI prays in front of the coffin of his predecessor, John Paul II, at St. Peter's Basilica at the end of a beatification ceremony on May 1, 2011, in Vatican City. Pool/Getty Images hide caption 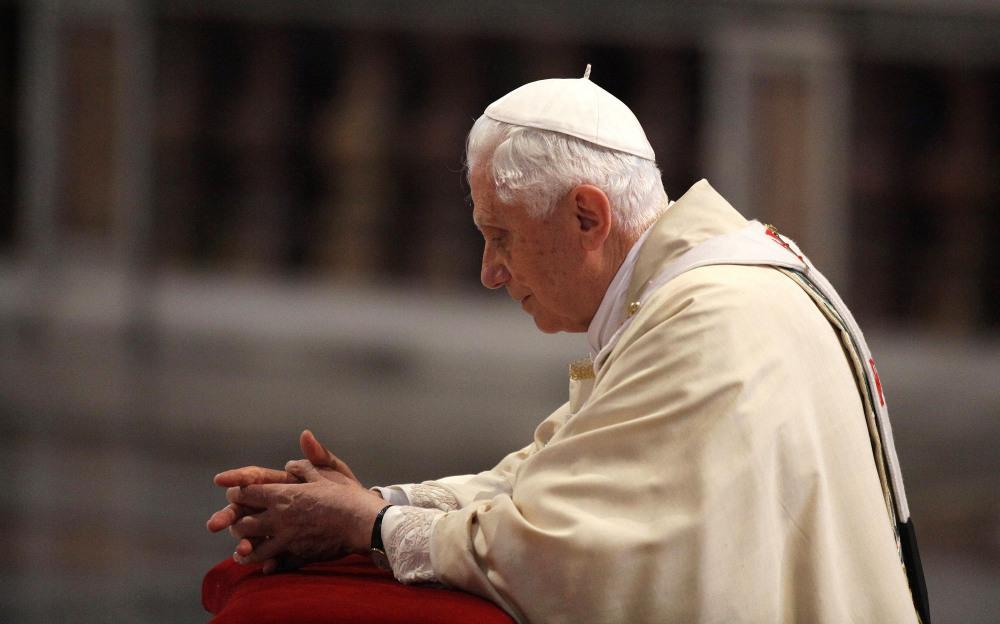 Pope Benedict XVI prays in front of the coffin of his predecessor, John Paul II, at St. Peter's Basilica at the end of a beatification ceremony on May 1, 2011, in Vatican City.

He was appointed archbishop of Munich in 1977.

Four years later, Pope John Paul II summoned Ratzinger to Rome to become the Vatican's theological watchdog, a role he would play for a quarter-century.

One of his most controversial documents was "Dominus Jesus," which restated the primacy of the Catholic Church and branded non-Christian religions as "gravely deficient."

Presenting the document at a Vatican news conference, Cardinal Ratzinger said the concept of interreligious dialogue promoted by the second Vatican Council had often been distorted into what he called an "ideology" of dialogue.

"The principle of tolerance and respect for freedom promoted by the reforms of the second Vatican Council are today being manipulated and erroneously taken too far," he said.

Although the axis of Catholicism had already shifted away from Europe to the developing world, Ratzinger made clear his central mission was reaffirming Europe's Catholic identity and shoring up the church's most traditional elements as the continent underwent strong secularization, low birth rates and the growing presence of Muslim immigrants.

He singled out Italian Catholics, urging them to serve as a beacon for Europe's re-evangelization.

"In so doing, the Italian Catholic Church will set a great example for Europe and the rest of the world, because treacherous secularism lurks everywhere and there is a universal need for faith that can deal with the challenges of our time," he said.

Tensions With The Islamic World

One of those challenges was the growth of Islam in what had been the cradle of Christianity.

Pope Benedict did not favor interfaith encounters with Muslims, convinced that Islam could not be put on an equal footing with Catholicism.

His remarks on Islam and violence triggered Muslim fury worldwide.

In September 2006, in a lecture on reason and faith at his old University at Regensburg, Benedict quoted a remark made by a 14th-century Byzantine emperor deriding Islam.

"He said, and I quote, 'Show me just what Muhammad brought that was new, and there you will find things only evil and inhuman, such as his command to spread by the sword the faith he preached,'" he said.

Tensions with the Islamic world eased two months later when the pope visited Istanbul's Blue Mosque and prayed silently next to a Muslim cleric. But he never issued a formal apology.

Jewish-Catholic relations under Benedict were sometimes rocky as the pope strived to bring back into the fold ultraconservative Catholics who had split with the Vatican over the liberalizing reforms of the second Vatican Council.

In 2008, Jewish protests over Benedict's reinstatement of the traditional Latin Mass with its Good Friday prayer calling for the conversion of Jews led the Vatican to change some of the prayer's wording.

A few months later, the pope backpedaled again following worldwide outrage over his decision to lift the excommunication of a renegade bishop who turned out to be a Holocaust denier.

Receiving a delegation of major American Jewish leaders, Benedict assured them of the Catholic Church's profound and irrevocable rejection of anti-Semitism.

"The hatred and contempt for men, women and children that was manifested in the Shoah was a crime against God and against humanity," he said. "This should be clear to everyone, especially to those standing in the tradition of the holy scriptures. ... It is beyond question that any denial or minimization of this terrible crime is intolerable and altogether unacceptable."

But he caused further anger — and not only among Jews — when he put the wartime Pope Pius XII — widely viewed as not having done enough to prevent the Holocaust — on the track to sainthood because of what Benedict called Pius' "heroic virtues."

One of Benedict's most successful and most emotional trips was to the United States in 2008, where he tackled the most painful issue for the American Catholic Church — clerical sex abuse — saying he was deeply ashamed.

"It is in the context of this hope born of God's love and fidelity that I acknowledge the pain which the church in America has experienced as a result of the sexual abuse of minors," he said. "No words of mine could describe the pain and harm inflicted by such abuse ... nor can I adequately describe the damage that has occurred within the community of the church."

As enforcer of Catholic dogma, Cardinal Ratzinger chastised dissident theologians, said no to female priests, no to married priests and no to gay marriage. He described homosexuality as an "objective disorder and an intrinsic moral evil."

In the eyes of liberal Catholics, Benedict XVI was a fierce opponent of modernizing reforms.

But for conservative faithful, Benedict was the champion who restored the traditionalist core of Catholicism.