Accessibility links
Auntie Anne's Pretzels In Beijing: Why The Chinese Didn't Bite It's the entrepreneurs' dream: tapping into China's market of 1.3 billion people. That dream fueled the efforts of two Chinese-American MBAs to take the soft-pretzel franchise — a staple of U.S. shopping malls — to China. Cultural and financial barriers, however, led to a far more challenging reality. 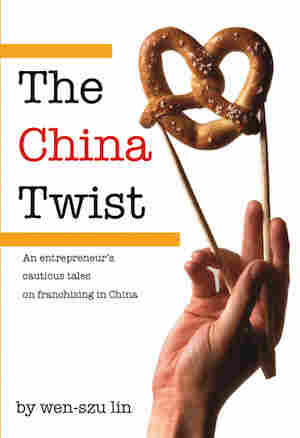 An Entrepreneur's Cautious Tales On Franchising In China

The lure of the China market is legendary. The dream: Sell something to 1.3 billion people, and you're set.

The reality is totally different.

Ask the MBAs from the University of Pennsylvania's Wharton School who tried to launch Auntie Anne's pretzels in China. The result is a funny, instructive and occasionally harrowing journey that is now the subject of a new book, The China Twist.

Wen-Szu Lin and Joseph Sze's venture began as an appealing tale of taking the American soft pretzel to the Middle Kingdom. They opened their first store around the time of the 2008 Beijing Olympics, and were even featured on NBC's Today Show.

"We bought the rights to China so ... we could try to expand this brand in China," Lin said on the show.

Lin, the author of the self-published book, notes that Auntie Anne's, a popular staple in malls across America, almost didn't get off the ground in China.

Lin thought that was odd, because the mix had no dairy at all.

After weeks of hopelessly lobbying, Lin got a surprise call from an official: Great news. The company's second pretzel mix sample had passed inspection.

"I was really shocked by it," Lin recalls, "because actually I had never sent in a second sample."

In retrospect, Lin thinks the pretzel mix was just a small victim of a larger trade tussle between the U.S. and China after the melamine milk scandal.

"During that time, I think a lot of Chinese shipments, food-related products, going into the U.S. were getting detained," Lin says. "My guess was the fact that it could have been tit for tat in terms of stopping our shipment."

Mix in hand, the MBAs now tried to introduce a beloved American snack to a nation where soft pretzels were unknown. They used an event that had been foolproof in the U.S.: the pretzel giveaway.

Free pretzels drew huge crowds in China — but not, Lin says, the middle-class, Chinese consumers who could actually afford the brand.

"They were janitors; they were the employees of other stalls next to us, and their friends," Lin says. "These are people who made probably less than 1,000 RMB a month" — or about $160.

A standard Auntie Anne's pretzel cost about $1.60 in China.

Looking back, Sze says one of their biggest challenges was reading the China market.

"The cultural divide was huge. I think we made a faulty assumption in the very beginning that our Chinese heritage was in line with the cultural phenomenon that was happening here in China," he says.

That's not uncommon, says Mary Bergstrom, who runs the Bergstrom Group, a brand consultancy in Shanghai.

"The trials and the tribulations and the challenges are so different than maybe what you would expect," she says.

Many of the problems Auntie Anne's ran into are typical for foreign firms. Bergstrom says some popular brands in the U.S. have crashed in China because they failed to offer an experience the Chinese were looking for.

"No. 1, consumers aren't used to eating things with their hands, so that's already a behavioral hurdle you have to get over," Bergstrom says. "The second issue would be the taste. In the U.S., doughnuts are very sweet, where in China, cakes tend to be less sweet."

Dunkin' Donuts, incidentally, is back in China, trying to make a second go.

Auntie Anne's tried to adapt its products to Chinese tastes. Sze says they changed the size of pretzel dogs, and offered pretzel bites and dips in various local flavors.

"We managed to get the platform to break even," he says.

But that wasn't enough: The company needed more funding to expand and survive. After the global financial crisis hit, that became impossible. The last of the dozen Auntie Anne's stores in China closed last year.

But neither Lin nor Sze has soured on pretzels — or China. Sze still believes Auntie Anne's can succeed in China. And Lin says the China market is still the place to be.

Lin now works directly for FOCUS Brands, which owns Auntie Anne's, along with Cinnabon and Carvel.

It took time for him to work through all the tough experiences of the past few years. But Lin says he was finally able to let it go by writing his book.