Accessibility links
Beyond The Battlefield, Soldiers Fight An 'Invisible War' The Invisible War looks at the ongoing issue of sexual assault in the military. Victims document the unsettling repercussions of reporting their assault within the military adjudication system. Part of an ongoing series of conversations with Oscar nominated documentary filmmakers. 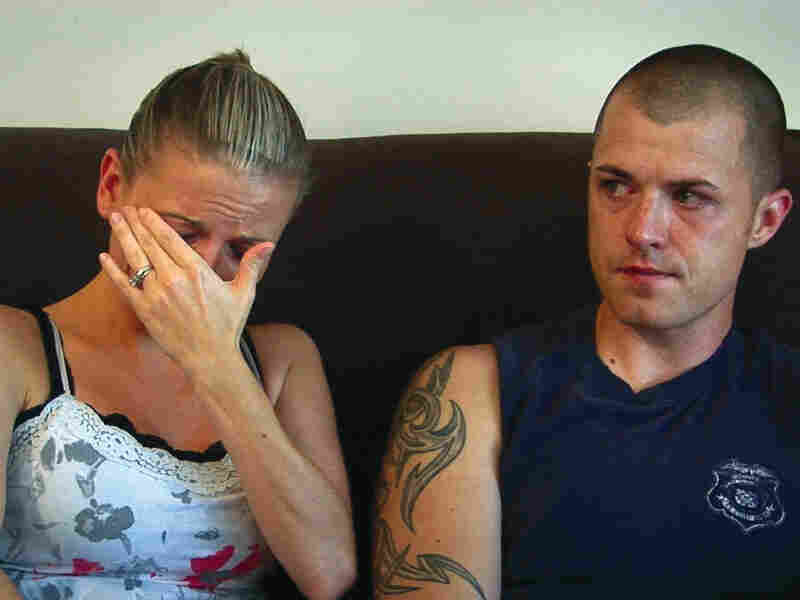 Kori Cioca, who served in the U.S. Coast Guard, and her husband Rob in an emotional interview for The Invisible War. Cinedigm/Docurama Films hide caption 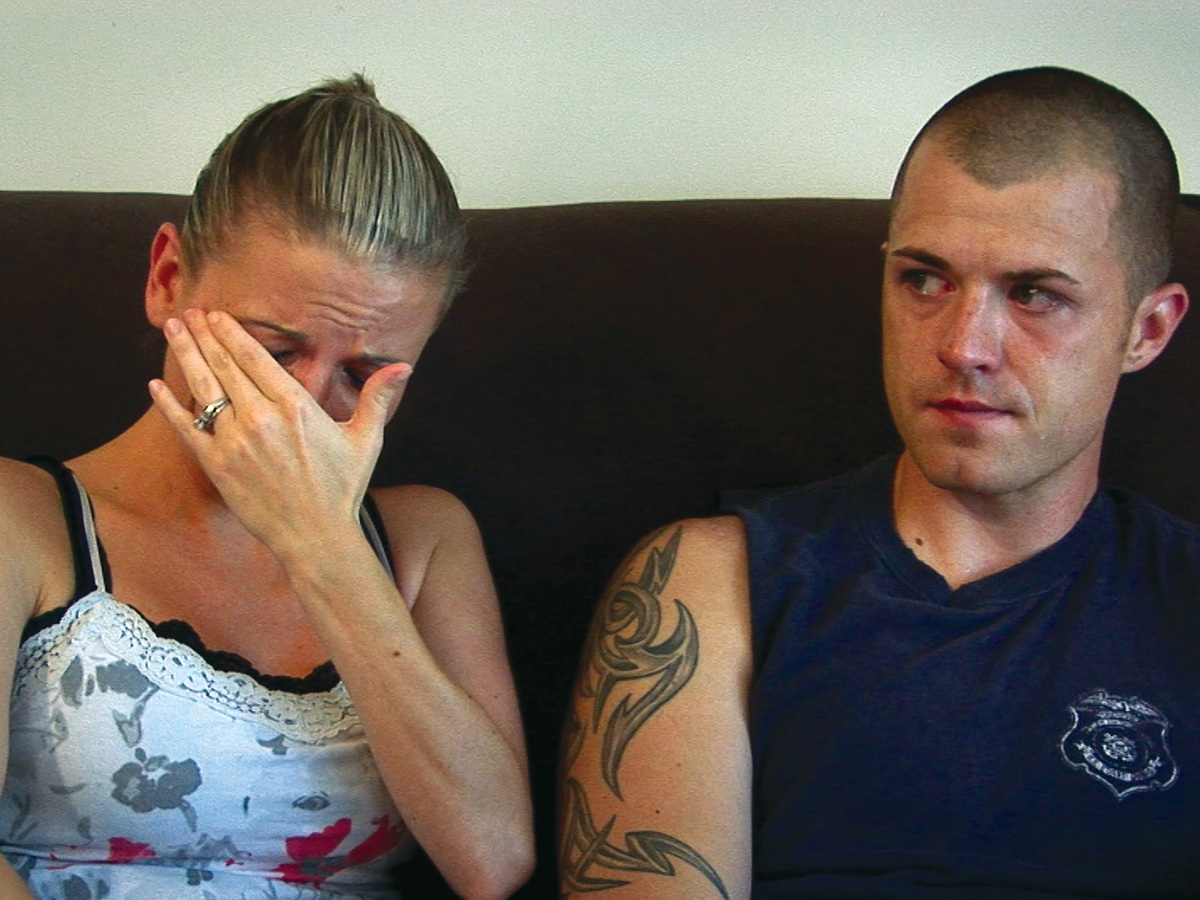 Kori Cioca, who served in the U.S. Coast Guard, and her husband Rob in an emotional interview for The Invisible War.

Next up in an ongoing series of Talk of the Nation conversations with filmmakers nominated in the Best Documentary Feature category at the Oscars: NPR's Neal Conan talks to the filmmakers behind The Invisible War, which investigates the extent of sexual assault in the military.

Through a series of in-depth interviews with victims, the film documents the repercussions of reporting sexual assault and makes an argument for changes in the military adjudication system.

Guests Kirby Dick, the writer and director of The Invisible War, and Amy Ziering, who worked as a producer on the film, talk to Neal Conan about how they tracked down their interview subjects, what's behind the military's slowness in responding to the culture of sexual assault in the ranks, and what has happened since the film's release.

"Kori ... joined the Coast Guard just full of enthusiasm and idealism and only really wanting to serve her country. And she thoroughly enjoyed her experience there, and was a really great Coastie, as they call them. You know, young, feisty, really good at, you know, being a team player. It's sort of everything she ever dreamed of, and [she] really appreciated the training she got in boot camp and the camaraderie and the rigor of the programs. So she was a really first-rate soldier.

"It's a very sad story, because she was such a high performer and well-noticed in her unit and got systematically singled out by one of her superiors and repeatedly harassed, stalked, etc. She continually complained to her superiors, but her complaints fell on deaf ears. And the abuse escalated and ultimately ended up in a violent rape and a vicious, brutal attack which ended up dislocating her jaw and permanently causing damage."

Dick on the rising number of military sexual assaults

"This is something we've been hearing for decades. ... I mean, according to the Department of Defense, 19,000 men and women were sexually assaulted in the military just last year, and of course if you multiply that back over the generations, that means hundreds of thousands of men and women have been sexually assaulted. And yet, even today they are still struggling to attack this problem. They have — it's long overdue that a problem should be addressed.

"I mean, part of the problem is there aren't enough members in Congress who have actually stepped forward. The well-meaning ones have been fighting the fight now for a decade, but what it needs, obviously, is a majority to actually — the responsibility of Congress is to oversee the military, and they really need to step up and assume that responsibility."

From 'The Invisible War'

From 'The Invisible War' - 'They Still Don't Believe Me'

'They Still Don't Believe Me'

On the rarity of justice in military assault cases

Dick: "Justice is so rarely served that only 14 percent of men and women who are assaulted in the military actually report. Eighty-six percent don't report. And even of the ones that do report, very few go to court-martial, and the ones that go to court-martial, very — there are very few convictions. And of the convictions ... very few ... serve substantial jail time. So justice is not being done at all.

"The military, unfortunately, has a very antiquated military justice system, and they've been unable to actually prosecute — investigate or prosecute these successfully."

Ziering: "And it's not — if I can just jump in — it's not really that these cases are necessarily that hard to prove. It's also that there's an inherent injustice in the military's judicial system, in that the people that are adjudicating these crimes are directly in the same chain of command as the people who are, you know, either the plaintiffs or the assailants. So it's just — it's a sort of a rigged game. The commander knows everyone involved, so his sympathies are, you know, obviously, going to be tempered by his knowledge of the participating parties, and so there's no impartial oversight. And that's really the crux of the problem. The crux of the problem is not that he said-she said case. It's actually that there's this, you know, this system in place that doesn't guarantee impartial over-adjudication of these crimes."

Ziering on why assaults within a unit can cut the deepest

"When you're in the military, you feel like your unit — you're indoctrinated to believe, psychologically and philosophically, that this is your band of brothers. These are people who have your back. So imagine how much worse an assault is by your fellow soldier. It's actually hard for you to psychologically compute, and it does register as incest, and an extremely profound core betrayal. I mean, it rattles these women, and it made it extremely difficult for them to have trust in any relationships in the future. It's absolutely shattering, and I think that's something that the public at large doesn't really understand. It's categorically different for women and men that are raped within the military."

On why male victims of sexual assault remain so quiet

Ziering: "Yeah. Well, before 'don't ask, don't tell' [was repealed], if any man came forward and reported a sexual assault, they themselves were accused of having a homosexual encounter, and asked were they sure they wanted to report. ... So imagine, you know, the incentive then to not come forward and disclose was extremely intense. And that's why many men were even further suppressed than the women in our U.S. military."

Dick: "And I think what people aren't aware of is that as many men are — as many or more men are sexually assaulted in the U.S. military each year as women."

Dick on why the filmmakers collected a range of stories, rather than just one

"Well, we wanted to make the point that this is a systemic problem. This happens overseas. That happens at base ... and happens, you know, in every branch in the military.

"I think up until this film came out, very few people were aware of that. There certainly was some reporting, and there were a case here, a case there, but people thought it was isolated. They thought perhaps the Air Force Academy scandal was just isolated to the academy, and in fact it's across the force. So what we thought was most important was to address this issue as a systemic problem. Because it's going to have to be solved as a systemic problem."

"Sadly, due to the lack of support after they report — emotionally and psychologically — and due to the blowback they receive, a lot of them do sort of start to falter as soldiers, and they don't perform well in their duties. And they end up getting discharged with personality disorders, ironically enough. And so, yeah, many of them are actually forced out of the military due to their inability to cope with the trauma of their assault and its aftermath."

On the film's larger impact

Ziering: "It's actually had a remarkable impact, and we're very gratified and proud of it. In fact, after Sundance, when we realized its power and the response it was generating, we ... ended up getting it to the highest levels of not only the Pentagon but also our administration.

"And Secretary of Defense Leon Panetta ended up watching it as a result, and two days later held a press conference to announce those substantial changes that Kirby mentioned earlier. And he, in fact, credits the film in part with the reason for him taking that action. And we're continuing to pursue and lobby in Washington and the Pentagon to sort of further this cause."