Accessibility links
Video Game Violence: Why Do We Like It, And What's It Doing To Us? As the gun-violence debate ratchets up to include mental health and violent pop culture, video games have become frequent targets of concern. But do violent games influence their players? Experts aren't clear, but violent games remain remarkably popular. 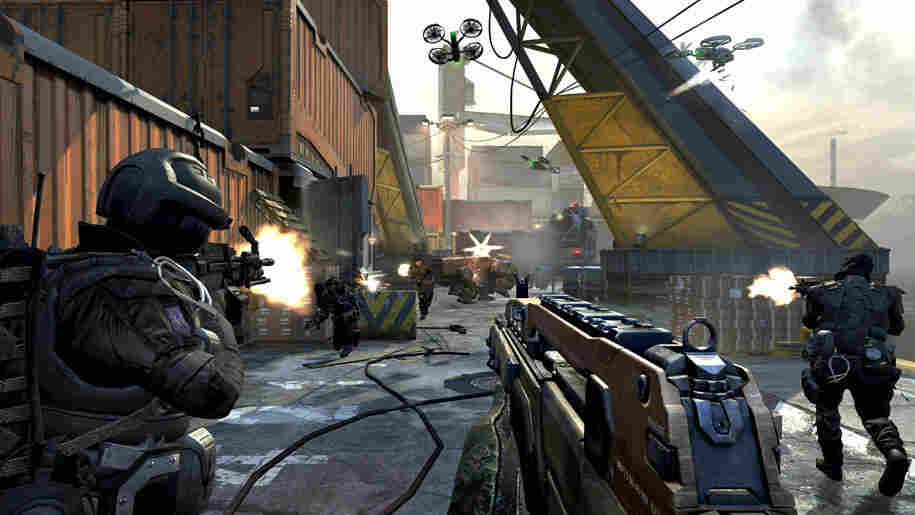 A typical scene from Call of Duty: Black Ops 2, the latest in the series of wildly popular video games. Activision hide caption 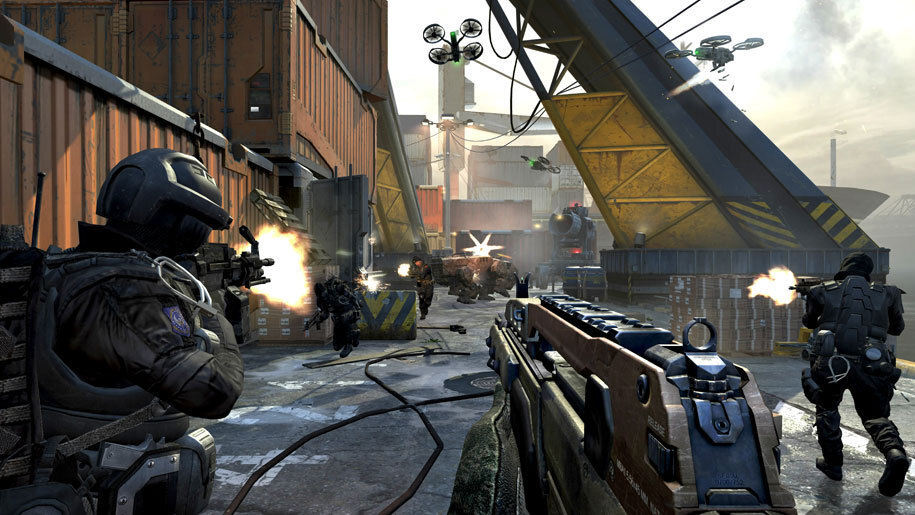 A typical scene from Call of Duty: Black Ops 2, the latest in the series of wildly popular video games.

Violent video games have been a small part of the national conversation about gun violence in recent weeks. The big question: Does violence in games make people more violent in the real world?

The answer is unclear, but one thing is obvious: Violence sells games. The most popular video game franchise is Call of Duty, a war game where killing is the goal.

There are more than 40 million copies of Call of Duty in the U.S.; one of them is at iStrategyLabs in Washington, D.C. It's a digital marketing agency, and in the center of the office is an 80-inch television, where employees sometimes take breaks and shoot at each other.

"It's a military game where basically you have an objective on each level, and basically you need to pass the objective, whether that's getting past supersoldiers or a checkpoint, without dying," says iStrategyLabs employee Megan Zlock, who identifies herself as a gamer.

Her colleague Sarah Sugarman likes playing RPGs, or role-playing games. She says for the most part, they're less violent than "first-person shooters" like Call of Duty. Zlock, on the other hand, likes her games bloody, especially Mortal Kombat and Diablo.

"You're really just plowing through and killing millions of demons throughout the progress of the story," Zlock says.

A story which, she says, is better with violence.

Both Zlock and Sugarman, along with the dozen or so people around the office TV, say violence doesn't have to be a part of a good game, but sometimes it makes the game better. Iowa State University professor Douglas Gentile, who studies the effects of violent video games on children, says violent games tap into a primal instinct.

"There are two things that force us to pay attention," Gentile says. "One is violence; the other is sex. Whenever either of those are present in our environment, they have survival value for us."

Gentile explains that there is a very basic reason that a lot of people think violent games are more exciting than say, Tetris.

"These gamers do have an adrenaline rush, and it's noradrenaline and it's testosterone, and it's cortisol — these are the so-called stress hormones," Gentile says. "That's exactly the same cocktail of hormones you drop into your bloodstream if I punched you."

Getting punched in real life? Not fun.

"But when you know you're safe, having that really heightened sense of stress can be fun," Gentile says.

Or as Zach Saale of iStrategyLabs puts it: "It just feels, like, awesome."

The palpable, frenetic energy that fills the room suggests that Saale's opponents are feeling pretty awesome, too.

"When I play this, since it is more realistic, it is easier to lose yourself in the game while you're playing it," Saale says.

A is for Autonomy: "You're holding a controller, so you are in control," Gentile says.

B is for Belonging: "If you play with other people or have friends who play the same game or who play online, you also are meeting your belonging needs," Gentile says.

And C is for competence: "[Games] often train you how to play as you're playing, and so you start feeling competent," Gentile says.

Which brings us to a decades-old question: Do violent video games make people more violent?

Gentile says that his research shows that children who play more violent games by and large behave more aggressively. But, he adds, that doesn't necessarily mean school shootings.

Gentile says we don't know whether games turn people into murderers, because the sample size is just too small. And he notes that exposure to violent video games is likely just one part of a bigger picture.

"Take the killers at Columbine High School," Gentile says. "They had been bullied, they had psychiatric illnesses, and yes, they also consumed a lot of media violence. No one of those things was the cause."

The people at iStrategyLabs playing Call of Duty aren't scientists, but they say something similar.

And to circle back to our first observation, there is one thing that's for certain: Violence sells. In half of the top 10 best-selling games of 2012, the main objective was taking lives.

The text version of this story initially misspelled the surname of an iStrategyLabs employee. His name is Zach Saale.