Accessibility links
Mardi Gras Merriment Beyond Bourbon Street Festivities Chasing chickens, catching MoonPies or towing your fishing boat as a parade float — those are just a few of the lesser-known traditions of Mardi Gras you'll find in towns across the Southeast. 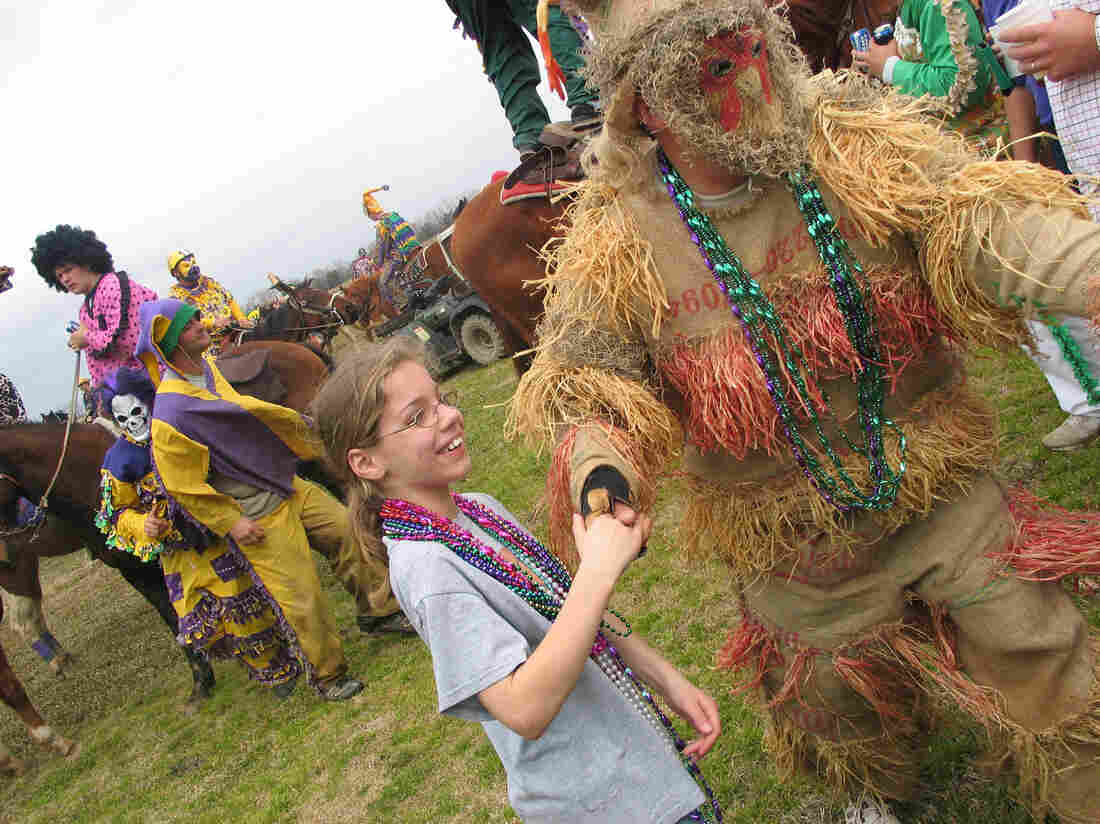 A reveler dances with a young girl during the Courir de Mardi Gras in Mamou, La., in 2007. Josh Noel/MCT /Landov hide caption 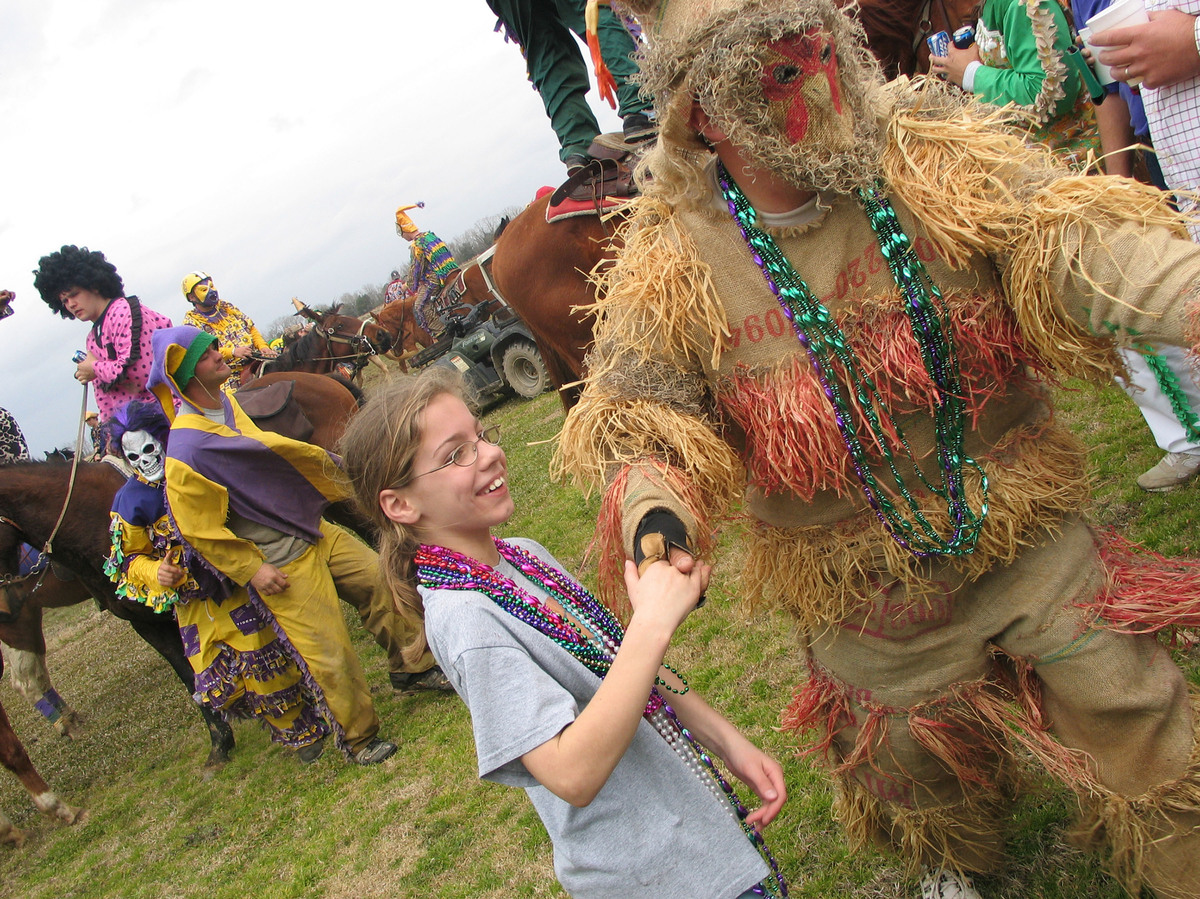 A reveler dances with a young girl during the Courir de Mardi Gras in Mamou, La., in 2007.

It's Fat Tuesday, the final day of indulgence before the fasting and penance of Lent begins. While the revelry in New Orleans tends to grab the spotlight, you can find some fascinating Mardi Gras traditions elsewhere.

From chasing chickens in Cajun Country to catching MoonPies in Mobile, communities all along the Gulf Coast have their own way of marking Carnival season.

Mobile, Ala., calls itself "Mother of Mystics" because historians believe the first North American celebration of Mardi Gras dates to the early 1700s, when Mobile was under French rule and settlers brought their Catholic customs with them.

"They actually participated with the slaughtering of the ox — the fatted ox, of course, which is where Fat Tuesday comes from and the term Mardi Gras," says Judi Gulledge, executive director of the Mobile Carnival Association. "They would use that as a spoof and parade the head of the ox through the streets," she says.

The Heavenly Appeal Of MoonPies

You're not likely to see a bloody ox head on parade Tuesday. But the streets of Mobile will be crowded with throngs who come to watch the city's mystic societies parade on colorful floats through downtown. People shout, "Throw me something, Mister!" as masked and costumed riders toss beads, toys, trinkets and a special sweet treat. "The throw du jour in Mobile would be the coveted MoonPie," Gulledge says.

Mobile's Mardi Gras has grown in popularity, with nearly a million people attending this year's parades and masquerade balls, the elaborate royal affairs put on by the secret mystic societies.

Gulledge says costumes and masks have long been associated with Mobile's celebration. She says the tradition dates back to the old country when all the households in a village would throw a big party the final day before Lent to rid their homes of any fat, considered a luxury.

"Some of the aristocrats would see how they were celebrating and would want to party with them," Gulledge says. "But of course they couldn't be seen cavorting with the lowly peasants." So they put on disguises to join in the fun.

In southwest Louisiana, disguises are part of another Fat Tuesday practice — the rural Mardi Gras run or "Courir de Mardi Gras." It's a Cajun tradition that evokes French medieval customs. Revelers go door to door, collecting live chickens and other ingredients for a communal gumbo.

"Led by a flag-bearing capitaine, this colorful and noisy procession of masked and costumed men on horses and wagons go from house to house in the countryside asking for charity in return for a performance of dancing and buffoonery," writes Pat Mire of the Louisiana Folklife Program.

Once the team has chased enough chickens to fill enough pots to feed the town, the gumbo feast is on. Dancing, singing and a bit of drinking ensue. One of the more colorful "Courir de Mardis Gras" is found in the town of Mamou, La., in Evangeline Parish.

That kind of local flavor typifies Mardi Gras celebrations in smaller communities. For instance, in the fishing village of Orange Beach, Ala., paraders tow decorated boats as Mardi Gras floats. In Pensacola, Fla., you're likely to see a pirate or two when the Krewe of Wrecks parades at the beach. And in Biloxi, Miss., children take to the streets pulling decorated wagons.

Wherever the festival, "catch what you can today," as former Mobile Mardi Gras Queen Catherine Van Antwerp Boykin once told me years ago. Because at midnight, the party's over. "It's time to put on your sackcloth and start repenting," said Boykin, who died in 1998.

Or, as Mark Twain wrote in Life on the Mississippi: "The grace-line between the worldly season and the holy one is reached."