Accessibility links
Harrowing Stories Of 'How To Survive A Plague' Director and producer David France documents the struggle of HIV/AIDS activists as they fought for better care and access to new medicines in the early days of the epidemic. "There are today, 8 million people alive on those drugs that were spearheaded in this remarkable meeting of minds and hearts," France says. 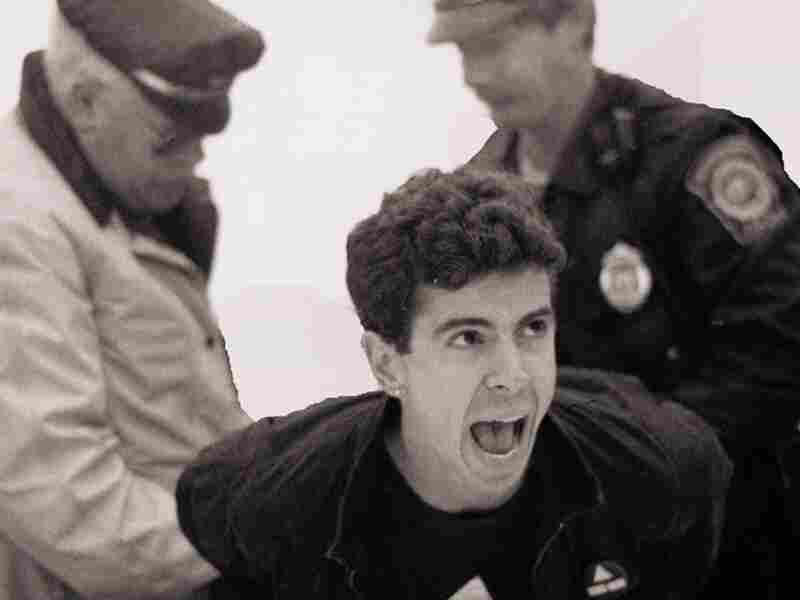 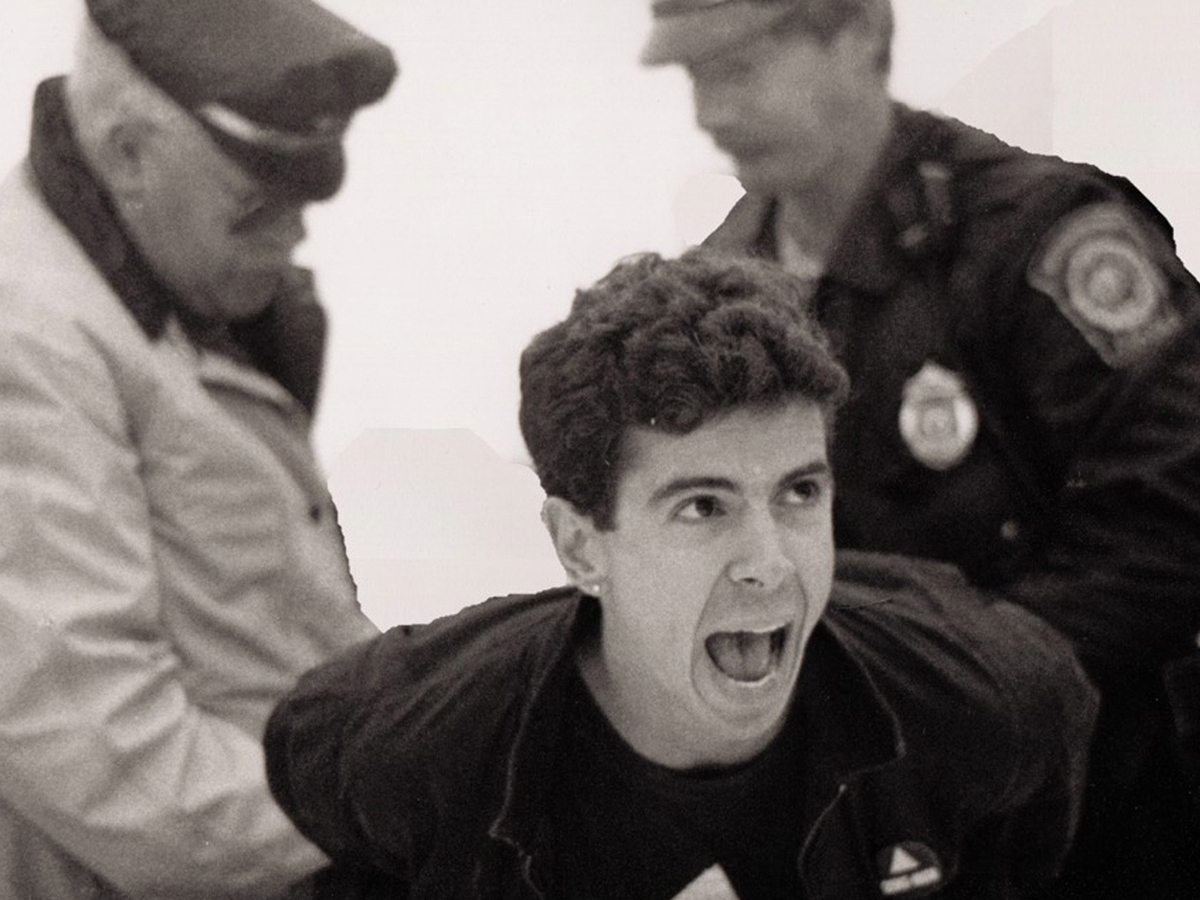 Director and producer David France chronicles the efforts of HIV/AIDS activists in the '80s and '90s in his documentary How to Survive a Plague. Above, AIDS activist Peter Staley is arrested in a scene from the film.

For the last in our series of conversations with Oscar-nominated filmmakers in the best documentary feature category, we turn to How to Survive A Plague. The film documents the efforts of HIV/AIDS activists to improve availability of and access to AIDS drugs in the 1980s and '90s.

Employing substantial archival footage, the film is a history of ACT UP, a determined, passionate and sometimes downright rude group of activists who put HIV/AIDS research on the agenda as they literally fought for their lives. It's a reminder that during an extended period of the epidemic, the diagnosis of AIDS was a death sentence. It highlights the dramatic protests they staged in Washington and New York — protests that ultimately helped wake a slumbering federal establishment, and led to policies and research that helped make AIDS a more manageable syndrome, if not yet a curable one.

David France, the director and producer of How to Survive a Plague, talks with NPR's Neal Conan about activism, awareness and healing.

On the archival footage used in the film

"There's this kind of accidental coincidence of history that HIV, which came out in 1981, the first reports of the epidemic, was followed closely by the arrival of the camcorder in 1982. And by 1987, when How to Survive A Plague [begins] ... that's the advent and dawn of AIDS — grass-roots AIDS activism, the camcorder and the home video tool had been fully taken up by activists as part of the arsenal of weapons that they were using in this battle to survive. And they left behind a huge pile of archival and vintage images from that time. It's really the first of the movements that was able to do — to kind of create its own, you know, moving-image history that way. And so there are tens of thousands of hours of activism and behind the scenes, kind of chronicling and self-historicizing and memorializing ... of what life was like back then and what death was like back then at a time when the mainstream media was paying so little attention."

From 'How To Survive A Plague'

From 'How To Survive A Plague' - 'Regulation Gone Wrong'

"The first impetus of ACT UP when it was formed in '87, was to say, 'Look, you must face this. You must see this. We're not going to die in ... private corridors anymore. We're going to make our deaths and our cries for help public.' And they took their argument, they took their plea to America through the media. And that was really — the first series of demonstrations they held were really to say, 'Look at what's happening to us,' and forcing the media to pay attention, giving them these spectacular and ... graphic demonstrations, that they really earned a place on the nightly news, and then made their argument directly to the American people: 'This government is not paying attention to us. The health establishment is ignoring us. The pharmaceutical industry is not involved in any aspect of research that would do anything to save our lives. Six years into the epidemic, not a single pill available; we've got to do something.'

"And they sought to create that sense of national urgency and ... to get the rest of the community, the rest of the world, really, to recognize that it was a disaster, an unmitigated disaster that was going unattended."

On how community involvement helped change the face of the movement

"[ACT UP] began their first couple of months as a kind of a protest organization, just saying, you know, stop doing nothing, start doing something. And they were feeding this kind of parallel drug research world. They were helping to build underground pharmacies in New York and in just about every major city in the country where they were importing drugs that the FDA was not approving in this country for use in any area. They were importing them from other countries where they were approved and creating really a parallel system.

"And what Iris Long, who was a retired pharmaceutical chemist — who had no dog in the fight in any way, except that she was driven to, you know, as a human being to try to do something in the middle of the epidemic — she found her way to an ACT UP meeting, and she found what they were doing, and then she said, 'You know, that's not going to save your lives. What's going to save your lives are the real scientists and the real drug-approval mechanisms and the real trial protocols. What you have to do is to make those things work for you.'

"And she armed the activists with a goal, which was to transform science and health care in America, and with the language to begin to understand how to do that, and set them railing on a path of this remarkable self-education mission to learn not just ... enough words in science to be able to converse with the researchers, but with the real fundamental knowledge about immunology and as cellular biology and virology, and to the point where they literally became a group of self-educated scientists in a way capable of interacting in an effective way, in a productive way, with Nobel Prize winners and people who are really at the benches trying to identify new agents to study and to try to get them into human bodies to see if they would do any good at all."

Nobody knew gay people then. Gay people were still largely invisible. This is, you know, decades before Ellen DeGeneres and, you know, marriage equality and 'Will and Grace.' You know, it was a time when there was great suspicion and kind of an alienation between gay people and the rest of the society.

On the gay community's initial distrust of the scientific community

"Nobody knew gay people then. Gay people were still largely invisible. This is, you know, decades before Ellen DeGeneres and, you know, marriage equality and Will and Grace. You know, it was a time when there was great suspicion and kind of an alienation between gay people and the rest of the society. And they brought suspicions of their own to the table. They figured that the reason scientists weren't doing research and producing effective medications is because the scientists were evil and wanted them to suffer and didn't care for their lives.

"And once they made that bond, and we see that in that particular scene, the beginning of that dialogue and respect and trust, then they really started to pull together in a single unit to try to find their way through this morass of this new virus, and to try to find a way to bring it to its knees."

On how far science has come, and where we are now

"You know, this is an amazing breakthrough, and it made survival possible. In fact, there are today 8 million people alive on those drugs that were spearheaded in this remarkable meeting of minds and hearts in this campaign to find this drug. ... The story of how we got those drugs is really ... a medical thriller about, you know, solving a problem that seemed unsolvable.

"... It changed the plague. And ... it also allowed us to address these brand new goals ... which include getting everybody who needs the drugs on the drugs, and saving the lives of the people who are, if they don't have access to the drugs, just as doomed as they were prior to 1996."