Accessibility links
Seeking A Glimpse Of Immortality In The Waters Of India's Holy Rivers Hindus in India are celebrating the 55-day-long Kumbh Mela, the world's biggest religious festival. An estimated 100 million pilgrims are expected to gather, pray and bathe in the waters at the confluence of three sacred rivers.

The Hindu gathering known as Kumbh Mela is on a scale difficult to fathom: The world's largest religious festival is millions of feet shuffling, millions of mantras chanted, countless sales of firewood to ward off the night cold. Millions of incense sticks will be burned and bells rung in devotional rituals called aartis. 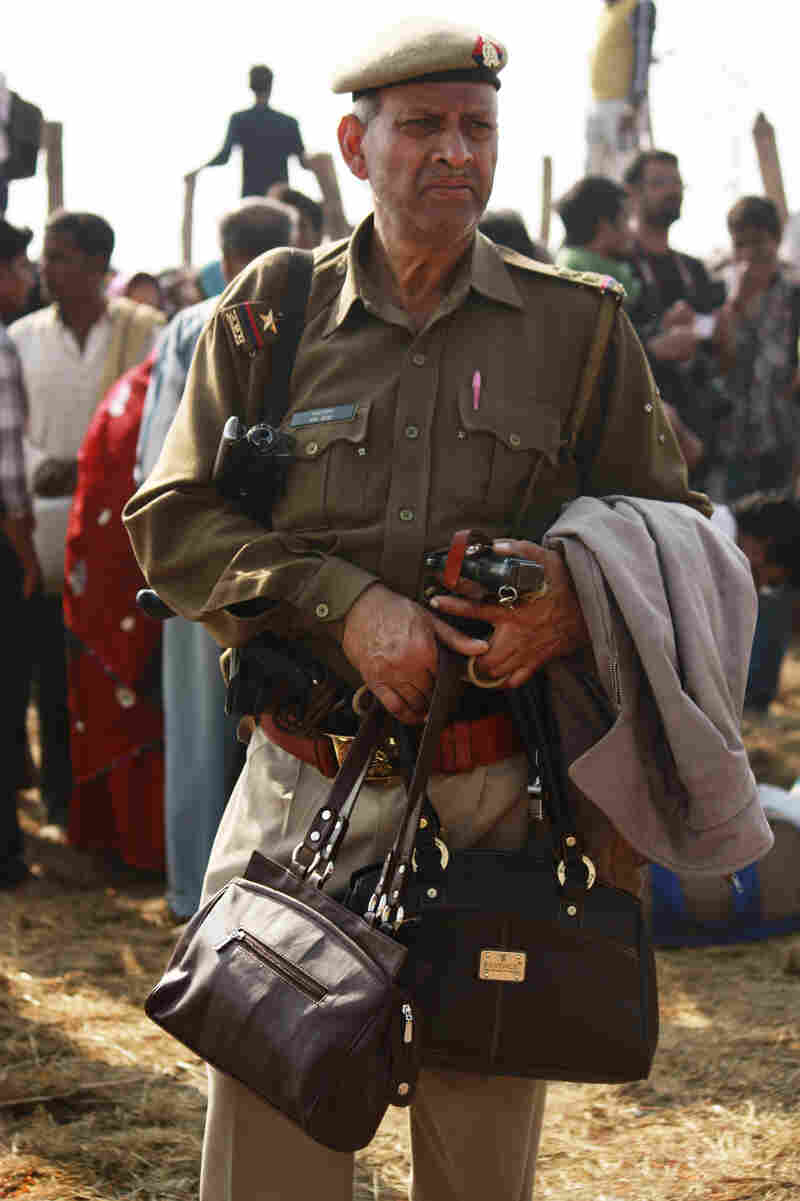 An officer guards the purses of pilgrims who came to pay homage to the holy waters at the confluence of the Ganges, Yamuna and the mythical Saraswati rivers. Anoo Bhuyan for NPR hide caption 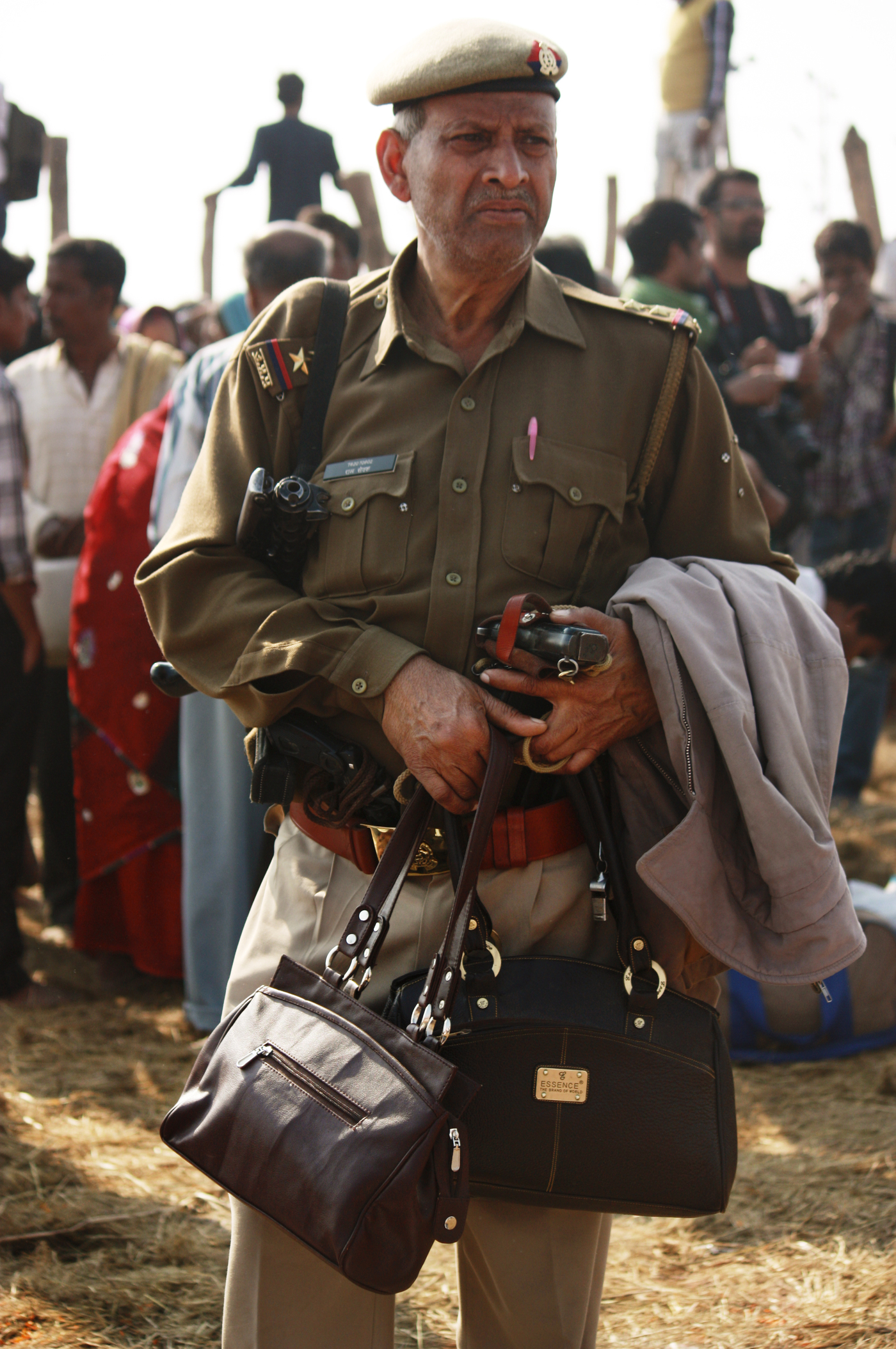 An officer guards the purses of pilgrims who came to pay homage to the holy waters at the confluence of the Ganges, Yamuna and the mythical Saraswati rivers.

Jet-setting swamis, naked holy men and foreigners fascinated by Eastern mysticism joined tens of millions of pilgrims for a dip in river waters believed to be holy.

Tragedy struck Sunday on the biggest day of the 55-day-long festival, when a stampede killed 37 people at a train station ferrying pilgrims home from the Kumbh Mela.

In a single day — this past Sunday — an estimated 30 million people celebrated on the river banks of the city of Allahabad. It's as if the combined populations of Illinois, Indiana, Wisconsin and Minnesota showed up at the same place, at the same time. These pilgrims have converged on the Sangam — the confluence of three rivers, the Ganga or Ganges, the Yamuna and the so-called mythical Saraswati.

American-born Sadvhi Bhagawati Saraswati is a sanyasi, or a nun in the Hindu tradition. She is a disciple of Swami Chidanand Saraswati and the managing editor of the Encyclopedia of Hinduism, which was released last year.

"Once every 12 years, when the stars, the planets, the moon and everything is in proper alignment, it is considered the most auspicious and divine and sacred time to have a bath in the confluence of these sacred water," she explains, referring to the three holy rivers of India.

In Hindu mythology, Saraswati says, the kumbh of Kumbh Mela is a pot that contained sacred nectar.

Saints Are Stars Of The Show

The Kumbh attracts all manner of devotees, from the simplest souls looking to wash away their sins to Bollywood film celebrities looking for an angle to promote their movies.

But the real stars of this show are India's holy men: sadhus, or saints, and naga sadhus. These naked ascetics, smeared in nothing but ash, are often the postcard image of religious India. 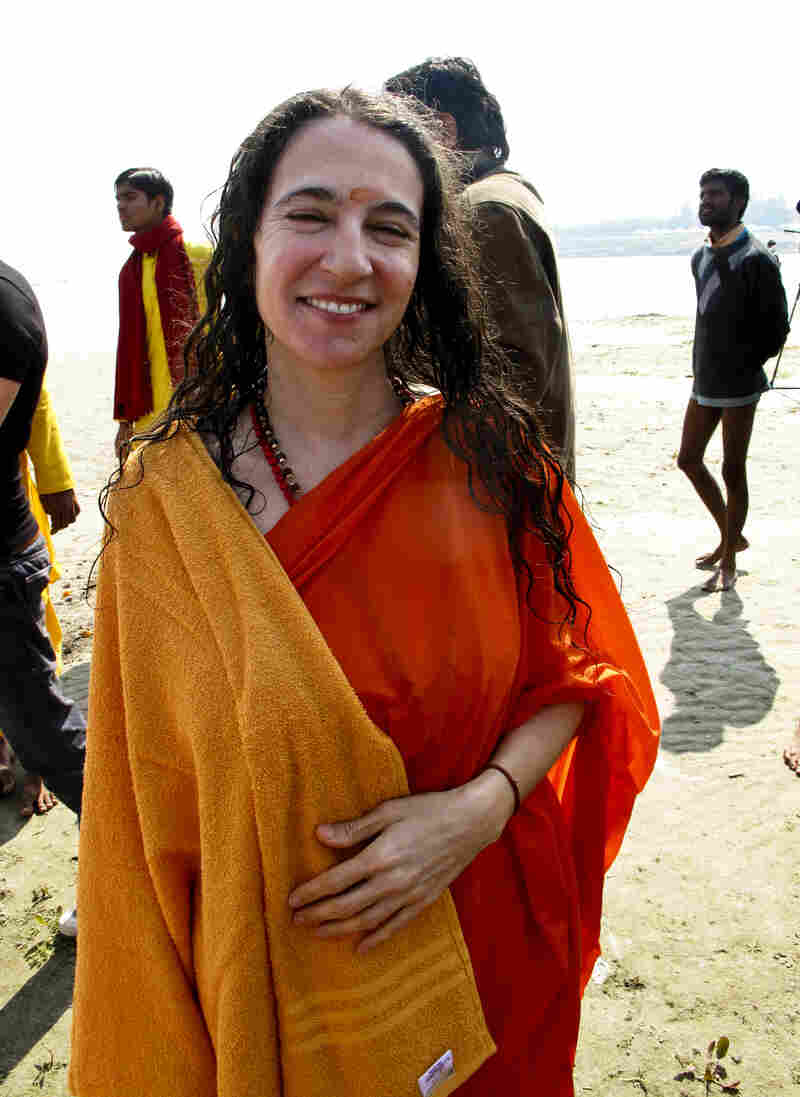 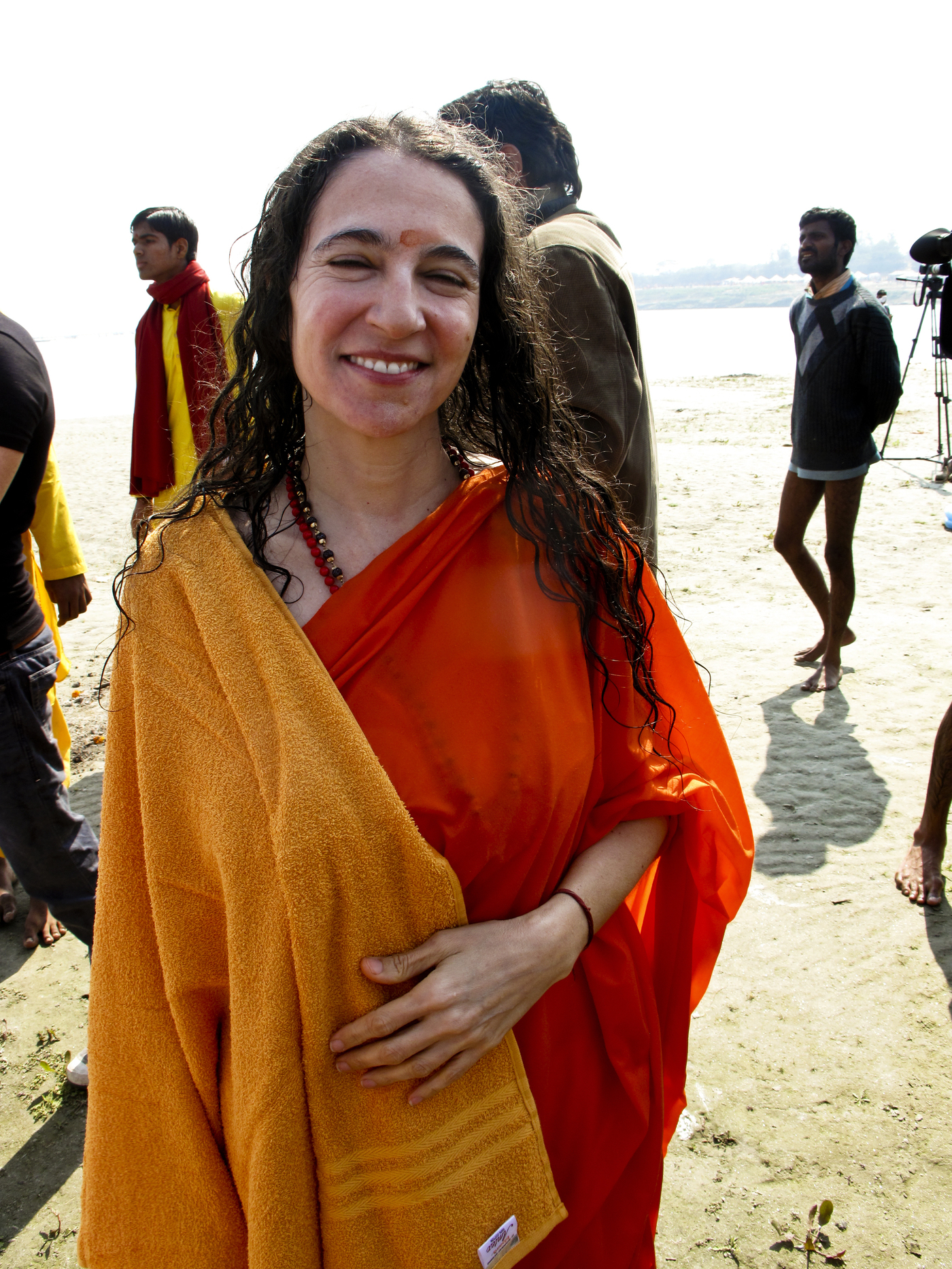 One holy man confided that the life of deprivation naga sadhus lead is more than today's initiates are willing to endure, and that as a result, the nagas are becoming an endangered species.

But millions of pilgrims lined a route in the cold pre-dawn hours Sunday to catch a glimpse of these normally secluded holy men, who kicked off a procession parading naked on horseback. Surrounded by heavy security, they made a dash for a dip in the chilly waters — and millions of pilgrims followed suit.

C.T. Gautam, a retired teacher from the state of Haryana, was among them. What did he pray for?

"For peace of the whole world," he says. "Nothing for myself, only this."

We go home from here with an awareness of our divine and eternal nature. ... That's what the nectar of immortality is.

He adds wistfully that this occasion, on the same date with the same astrological alignment "will not come around again for another 147 years."

Movies have been made about getting lost at the Kumbh Mela, where India's richest and its poorest inhabit the same noisy, unsanitary conditions, living under the stars along the river banks in this megatent city. To accommodate them, 35,000 toilets were built and 500 miles of electric wires were installed.

Gyanesh Kamal, a saint from Allahabad, calls the Kumbh "the great leveler."

"There is no discrimination at all," he says. "We are getting everyone here full of simplicity. This is the purpose, to make equality."

It is expected that by the final dipping day on March 10, more than 100 million people will have experienced the Kumbh Mela.