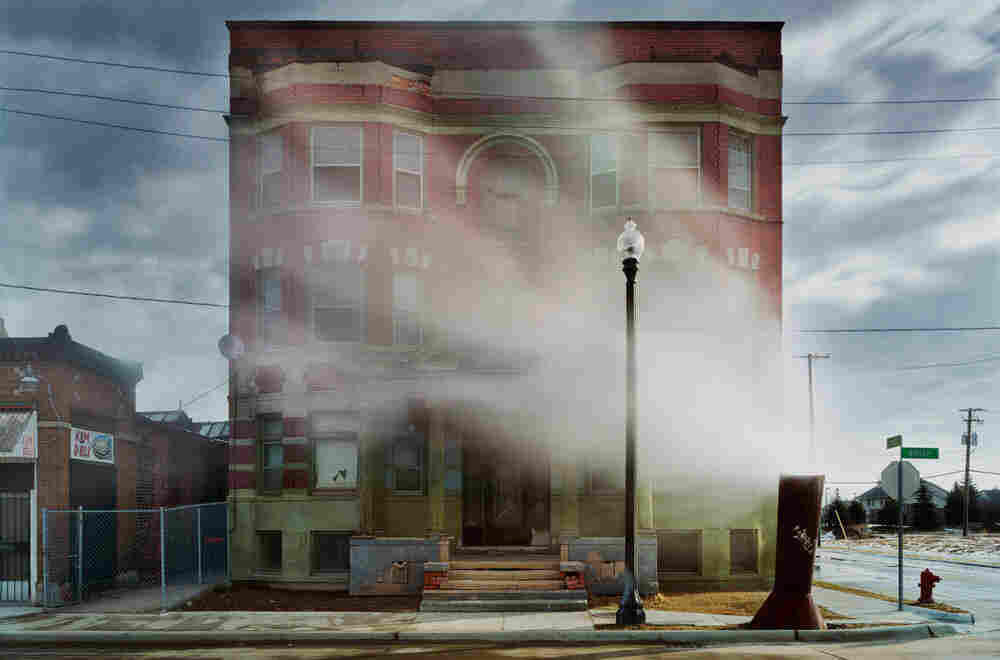 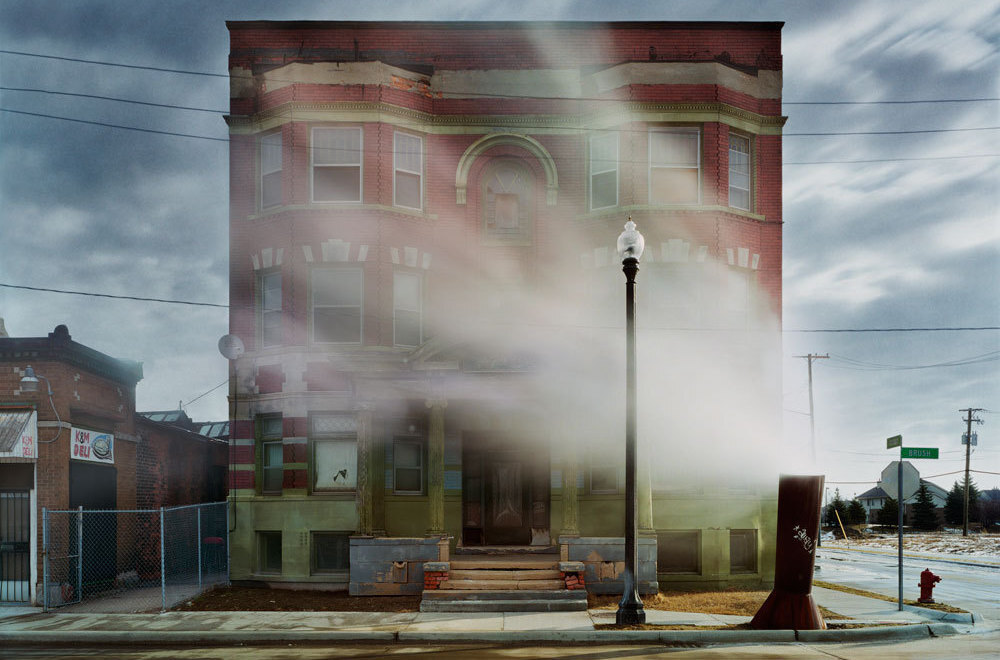 An image from "Detroit Disassembled," an exhibit on display at the National Building Museum. (Andrew Moore, The Aurora, Brush Park neighborhood, 2008)

"Girdles and red nail polish and intestinal cleansing and bar fights and sewer pipes and wiretaps and eternal life and decay all around. It was insanity. It was outrageous. It was a reporter's wet dream. Where the hell was I?

"I paid the bill and left.

The corrupt, crime-addled Detroit of Charlie LeDuff's new memoir, Detroit: An American Autopsy, isn't the same city that I left a month ago. 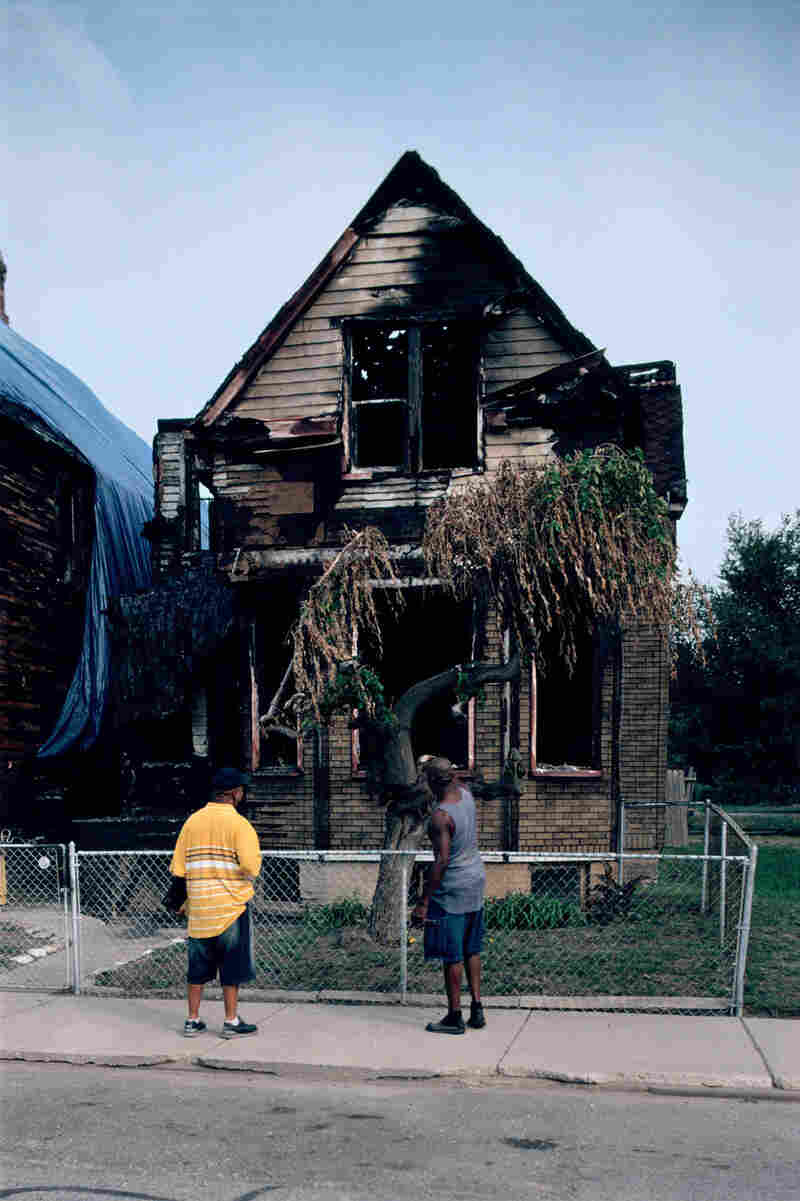 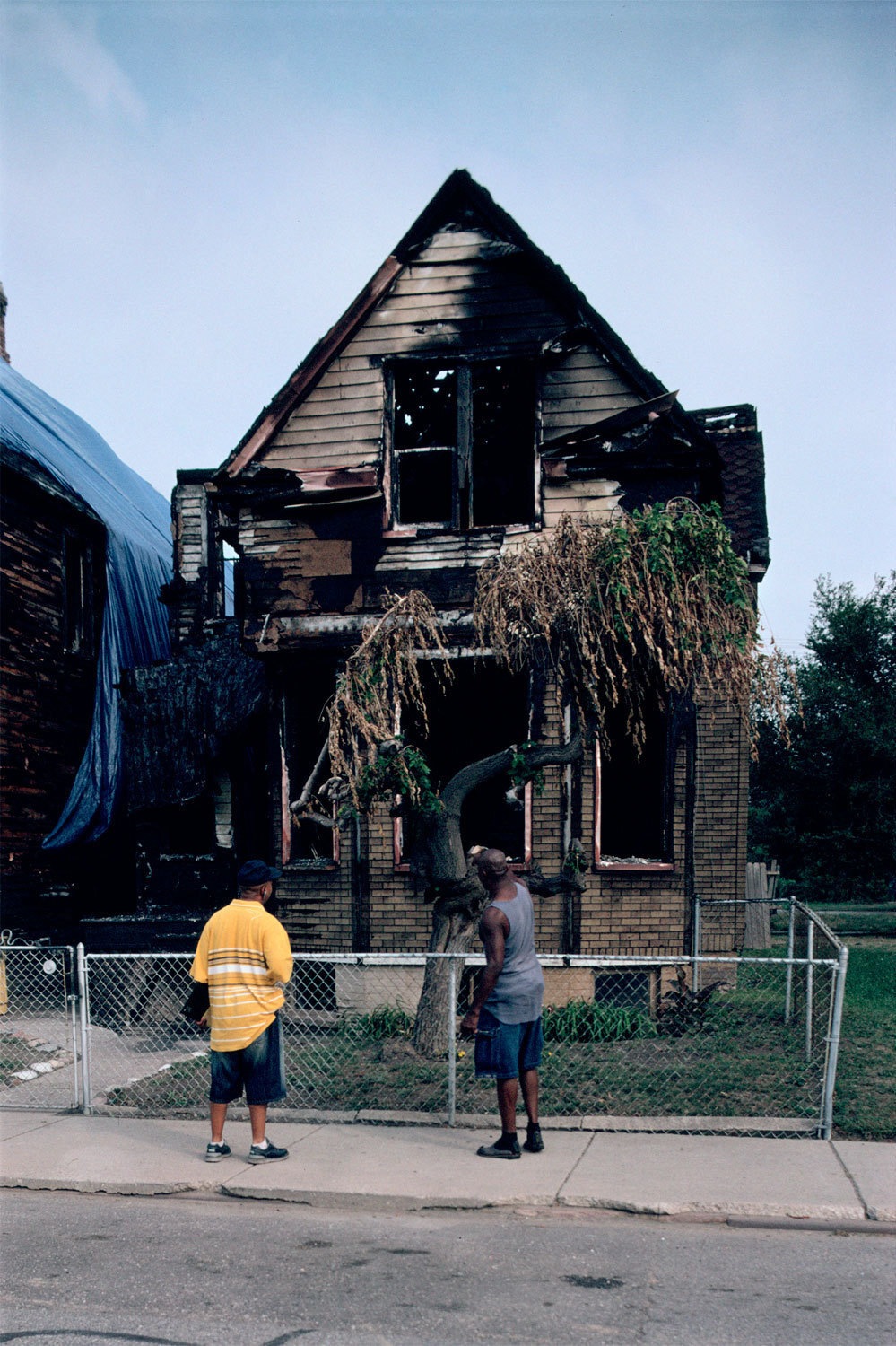 An image from the "Detroit Is No Dry Bones" exhibit at the National Building Museum. (Camilo José Vergara, 3497 Mack Avenue, Detroit, 2007)

Some identifiable landmarks and notable politicians dot the pages, but when I read Detroit, I felt like I didn't know my native city anymore. The intense and surprising pictures of the National Building Museum's current pair of exhibits, "Detroit Disassembled" and "Detroit Is No Dry Bones," didn't help my feelings of displacement.

Which is the real Motown, and which is a mirage? Did I imagine the Roaring '20s charm of the up-and-coming groups playing Cliff Bell's Jazz Club in Grand Circus Park? Was the deliciousness of Midtown's Avalon International Bread Company's holiday stollen loaf more fleeting than fixed? Was Corktown's Sugar House bar really just covering up emptiness and destitution behind a false front of bustling occupancy as it celebrated the historical end of prohibition?

It's true that my Detroit experience is different than many others. I'm a lifelong resident of an outer suburb, and I went to a prestigious boarding school that you might remember Eminem making fun of in 8 Mile.

But the Detroit that I know and have come to love is one where lifelong residents and artistic newcomers gather to chat about neighborhood development over a cup of coffee; one where a weeknight open hearing on transit investment and bus schedule rerouting is packed to the edges with urban and suburban commuters alike. It is a city where occupancy in many central neighborhoods is approaching the upper-90th percentile, according to the downtown development booster D:hive. Temporary pop-up shops in underserved neighborhoods become permanent as residents use their wallets to support local initiative and invest in entrepreneurs willing to take a chance on a city that so many national chains have passed over for greener, more suburban pastures.

LeDuff and his unwitting photography cohort of Andrew Moore and Camilo Jose Vergara seem to be operating in a completely different city from the one I grew up in and around, the one where I spent most of the last four months of my budding professional life. Each man's individual lens casts a strange and eerie shadow over the people of Cass Corridor, Corktown and Woodward Avenue.

It's true that the blunt statistics of the city's precipitous demise have become standard bar chatter among the young and hopefully mobile residents of southwestern Michigan. Detroit, birthplace of the automobile, the American middle class and the Motown sound, has tumbled from fourth to 18th-most populous city since 1950. It's shedding jobs, residents and development dollars as long-simmering racial tension and blatant prejudice cut deep scars into the metro landscape. A regular heavy-hitter in annual "most dangerous city" rankings, Detroit is a hopeless pockmark on the lower thumb of the Michigan mitten, and is likely to enter into direct state control as it struggles to balance its books. 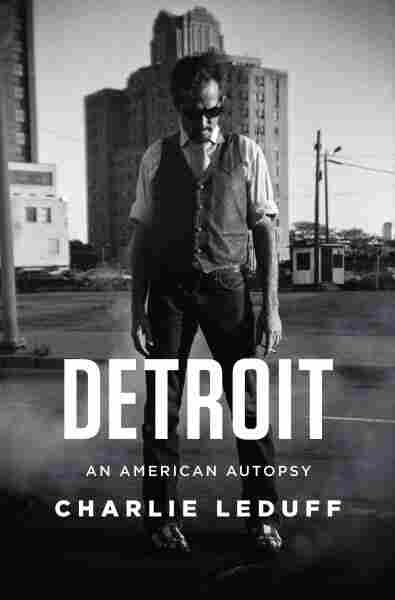 LeDuff's Detroit is heavy on this last part. After the Pulitzer Prize-winning native son returns home, he takes it upon himself to help chart the corruption raging through the streets of Wayne County. It's a noble task, and I remember reading some of the stories LeDuff wrote for The Detroit News — shedding light on the city's miraculously decreasing murder rate, detailing the Sisyphean efforts of the tragically underfunded Detroit Fire Department, hounding the inefficient City Council for its lack of action on anything but infighting.

But LeDuff's gruff narration often makes the city sound like a B-grade noir flick, full of juiced-up coppers, bumbling fat cat bureaucrats and busted streetwalkers past their prime who'll tell you a saucy tale at the bar just as soon as they'll take you out back for a quick trick.

He makes it clear how rough the city has been to his family — his unemployed brother, deceased sister and niece, and struggling widow mother present a somber, sad picture of regular life in a dead-end town.

Still, that doesn't excuse his fondness for the flourishes of an old-time serial crime reporter, digging up cold cases and telling the hard truths that nobody else wants to tell. His memoir works best when he leaves out the broadly prescriptive analyses of Detroit's woes and focuses in on the narrow and weird of his own family.

Each man's Detroit story is true, in a way — true for them. But the real narrative of a city is more than just one individual memoir or one depressing collection of images. The true story of a city is a living, breathing, changing beast that no one can tame, and no one individual camera can properly capture. Detroit may have more problems than most major American cities, but its future is brighter than LeDuff et al. might have you believe.

Young, creative people are moving in and moving back. Neighborhoods are cleaning up. After years of legislative failure, a regional transit authority is slowly taking shape, offering the car-centric region a feasible alternative to the vehicles that made the city what it is in the first place.

I'm not naive. I know that a light-rail system and a couple of adventurous artists won't fix all of Detroit's problems. But I do know that there is more to Detroit than despair and empty dreams of yesteryear. You just have to come by and look a little closer.

LeDuff himself says it pretty well:

"In Detroit ... things are rarely what they seem — they're an amalgam, a fictionalized version of the truth served up to suit people's needs and help them get on with the difficult business of living."

Detroit still lives. Go and see for yourself.

Read an excerpt of Detroit