Accessibility links
Uses For Latin (If You're Not The Pope) Pope Benedict XVI's resignation speech, given in Latin, has thrust the dead language into the spotlight. Writer Annalisa Quinn says that although not many people outside of the Vatican actively speak it, Latin is still very much a part of our lives.

Uses For Latin (If You're Not The Pope)

Uses For Latin (If You're Not The Pope) 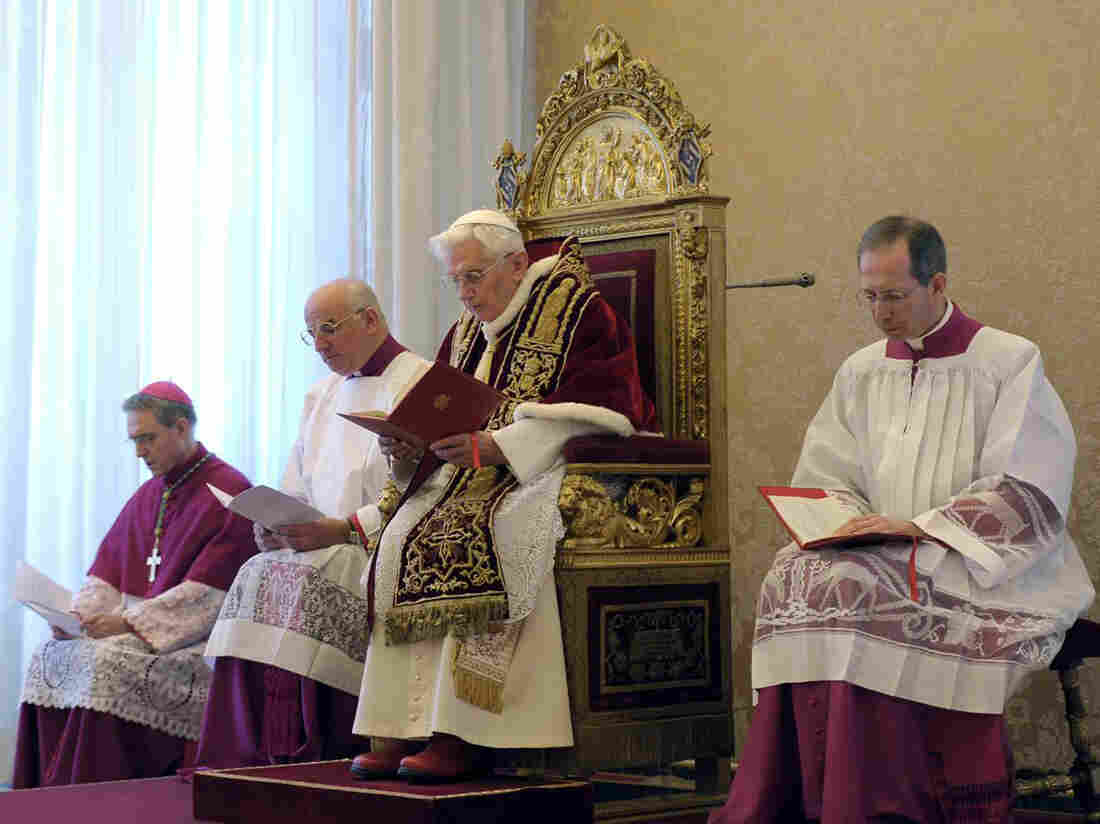 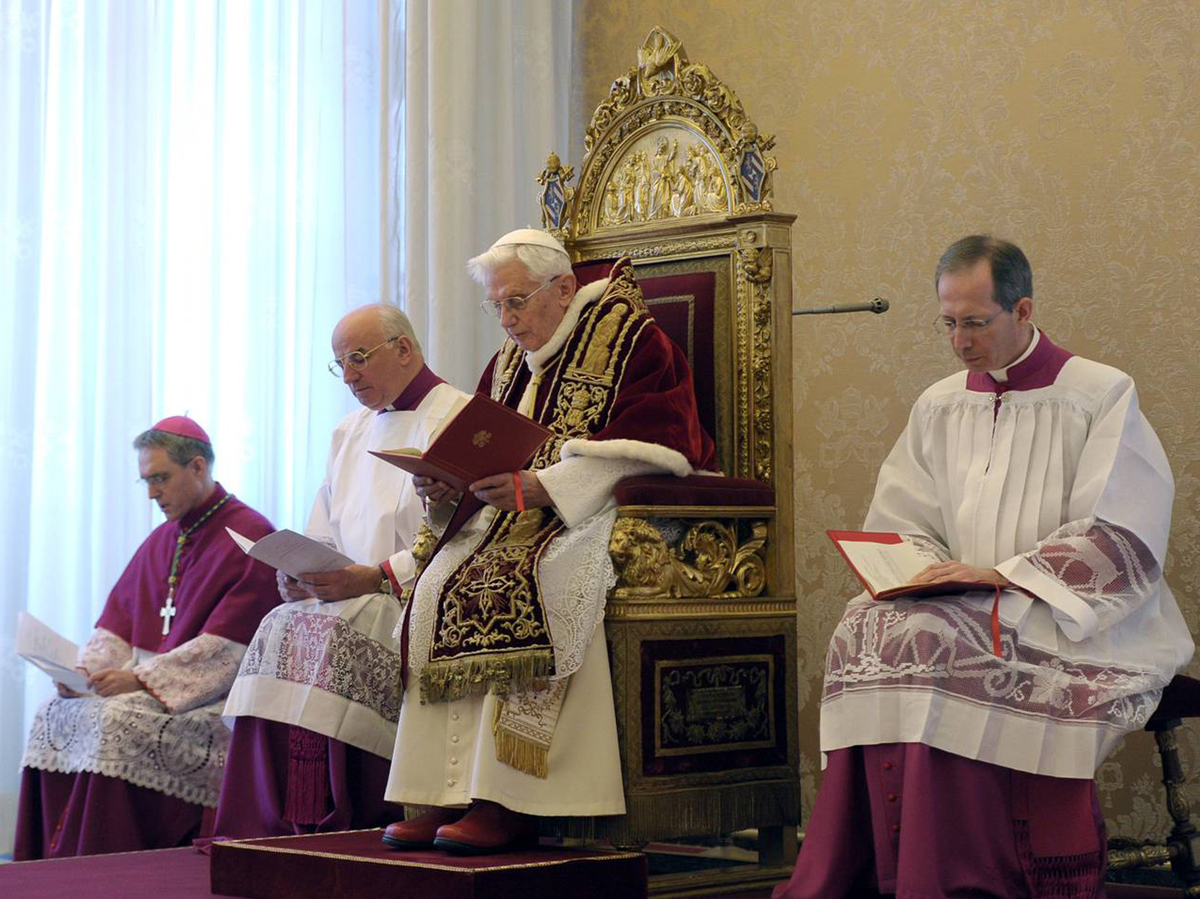 When Pope Benedict XVI unexpectedly announced his resignation in a short Latin speech this week, Italian journalist Giovanna Chirri used her knowledge of the dead language to break the news first. But outside of the church, academia and the occasional Vatican beat reporter, people who write or speak Latin tend to turn up only in odd niches: a Finnish radio station that has a weekly news broadcast in Latin; a married couple who translate Dr. Seuss books into the dead language, like Virent Ova! Viret Perna!! (or "Eggs Are Green! Ham Is Green!!").

Studying the classics, since it has little professional application outside of a few elite careers, tends to be seen as something of a luxury pursuit. Latin serves as a cultural signifier — if you are studying classics, you announce either your wealth or your devotion to the selfless pursuit of knowledge. In movies and books, knowledge of Latin or Greek is a little bit like glasses and knitwear — a kind of shorthand for intelligence.

Cambridge professor Mary Beard, who is probably the world's most famous living classicist, wrote in an email that the "tendency to associate Latin with privilege" comes from its association with private (or "independent") schools in the U.K.

Beard, when asked why we should still study Latin, answered simply: "It gives us direct access to extraordinary and influential things written in it."

It also gives us insight into our own language: English vocabulary is one of the most important Latin relics. English is at heart a Germanic language, and our most basic and forceful words are Germanic — love, hate, war, slay, walk, go, say. But much of our secondary vocabulary is Latin, borrowed wholesale or brought by way of French at the time of the Norman conquest. Words that mean the same thing as the first list — adoration, animosity, hostility, execute, perambulate, depart, converse — that have a Latin root instead of a Germanic one tend to have a more formal and higher register, and are often more specified but sometimes less powerful.

Henry Hitchings, a historian of the English language and the author of The Secret Life of Words: How English Became English, added in an email that the difference is, "to put it crudely, that words of Latin origin are formal and scholarly, whereas words of Germanic origin are more everyday and at the same time may have more visceral significance."

Consider Ezra Pound's magnificent evocation of Christ, using simple and colloquial Anglo-Saxon diction: "He cried no cry when they drave the nails / And the blood gushed hot and free, / The hounds of the crimson sky gave tongue / But never a cry cried he."

And compare it with Milton's highly wrought Latinate verse, also depicting Jesus: "Beyond compare the Son of God was seen / Most glorious: in him all his father shone / Substantially expressed; and in his face / Divine compassion visibly appeared ..."

In Milton's rendering of Jesus, there are nine words of Latin origin; in Pound's, there are only two. Pound's is clear and evocative; Milton's is dense and formal.

George Orwell, in his classic essay "Politics and the English Language," argues that the language of bureaucracy is deeply indebted to Latin, and seeks to prove that politicians use Latinisms to obscure meaning and formalize to the level of incomprehensibility. He writes, "Bad writers, and especially scientific, political, and sociological writers, are nearly always haunted by the notion that Latin or Greek words are grander than Saxon ones, and unnecessary words like expedite, ameliorate, predict, extraneous, deracinated, clandestine, subaqueous, and hundreds of others constantly gain ground from their Anglo-Saxon numbers."

It isn't Latin's fault that its English descendants can sound so ponderous. It has a lot to do with the way it came into the language — often through religious writings and technical coinages. But it is clear from the pope's cryptic resignation speech that, even in the original, Latin can be used for obfuscation (from the Latin obfuscare: "to darken").