Accessibility links
Will 'Made In Haiti' Factories Improve Life In Haiti? International aid agencies are pouring millions of dollars into a large industrial park on Haiti's north coast. The Caracol Industrial Park is intended to create 60,000 jobs and encourage people to move out of the overcrowded capital Port-au-Prince.

Three years after the devastating Port-au-Prince earthquake, one of the largest international relief projects in Haiti isn't anywhere near where the quake hit. It's an industrial park on the north coast halfway between Cap-Haitien and the border with the Dominican Republic.

Aid agencies are pouring millions of dollars into the project to encourage people to move out of the overcrowded capital and create jobs. Critics, however, say the jobs don't pay enough to lift people out of poverty.

The Caracol Industrial Park is one of the most tangible developments to come out of the billions of dollars in post-earthquake aid to Haiti. 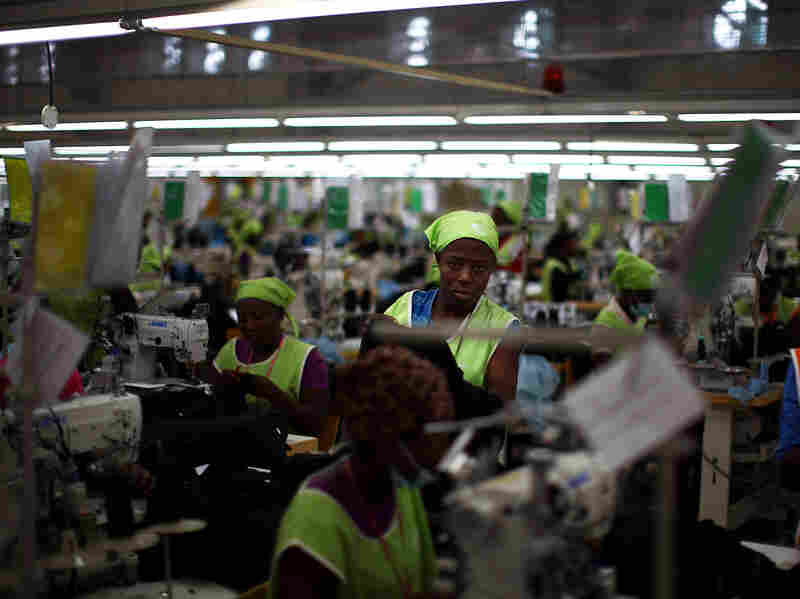 Workers at the SAE-A textile plant inside the Caracol Industrial Park in northern Haiti earn $5 a day. Backers of the project say it could create 60,000 jobs inside the park. David Gilkey/NPR hide caption 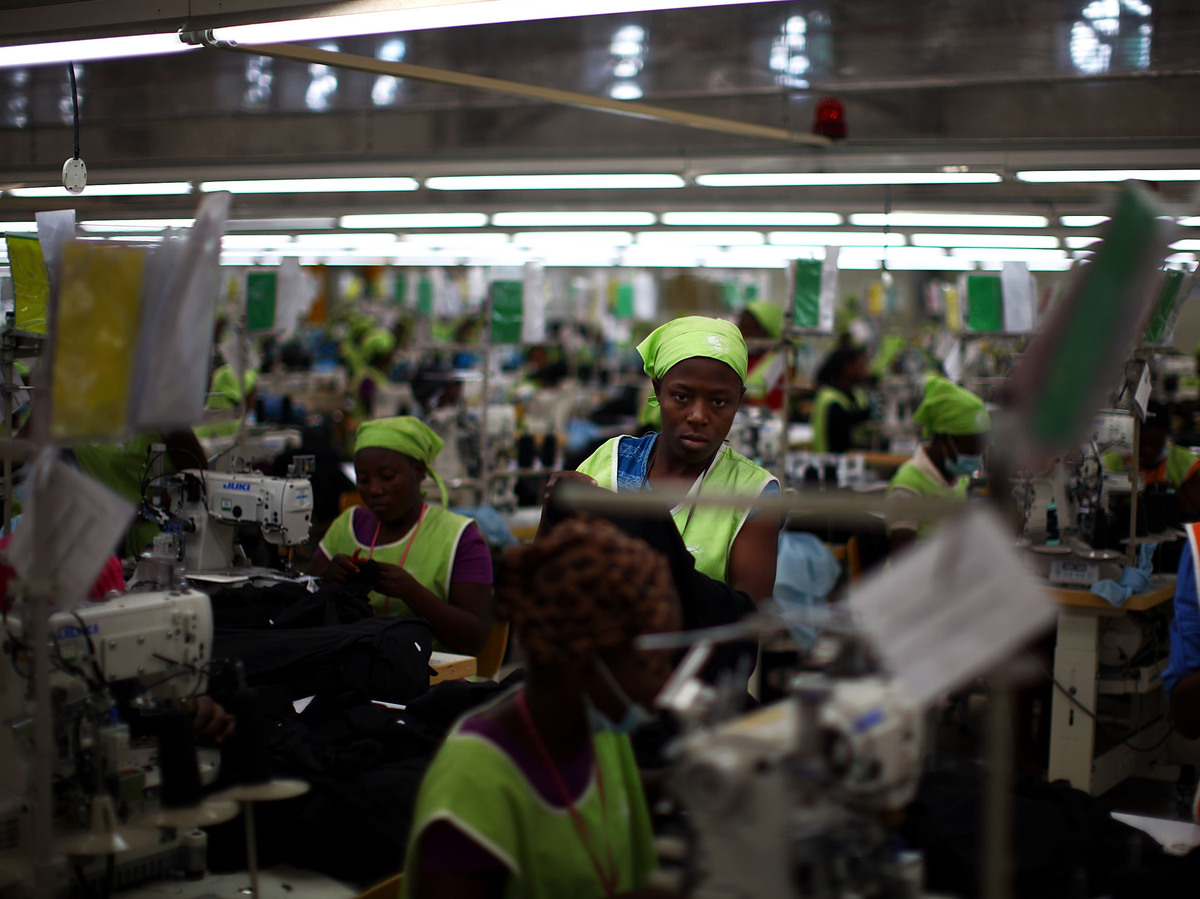 Workers at the SAE-A textile plant inside the Caracol Industrial Park in northern Haiti earn $5 a day. Backers of the project say it could create 60,000 jobs inside the park.

The sprawling 600-acre compound sits in what used to be small vegetable plots and scrubby pastures. It officially opened late last year, but much of the park is still under construction.

Georges Sassine, the head the Haitian government agency that oversees industrial parks, says the goal is for Caracol to directly hire 60,000 people, spurring the growth of tens of thousands of other jobs outside the park.

Sassine has been in Haiti's garment manufacturing business for decades and says he's confident that international manufacturers will be eager to lease space in the facility.

"Why do they want to come here?" he asks rhetorically. "Economics, the availability of labor, cost of labor, access to the U.S. market. We are very close to the U.S., plus you are not paying duty. So it's win-win-win."

Labor all across Haiti is plentiful and cheap. Even with only a fraction of the industrial park up and running, dozens of people are lined up outside the gates hoping to find work. The minimum wage in Haiti is $5 a day. And thanks to legislation passed by the U.S. Congress after the earthquake, most Haitian textiles can now enter the U.S. duty-free.

The anchor tenant at the park is the Korean clothing giant SAE-A.

The shirts labeled "Made in Haiti" will sell for $7 apiece at Wal-Mart stores in the United States.

SAE-A currently has just over a thousand people working at Caracol but plans to hire thousands more. Sherwin-Williams recently opened a paint production facility across the street. Other blue-metal buildings are going up across the park. 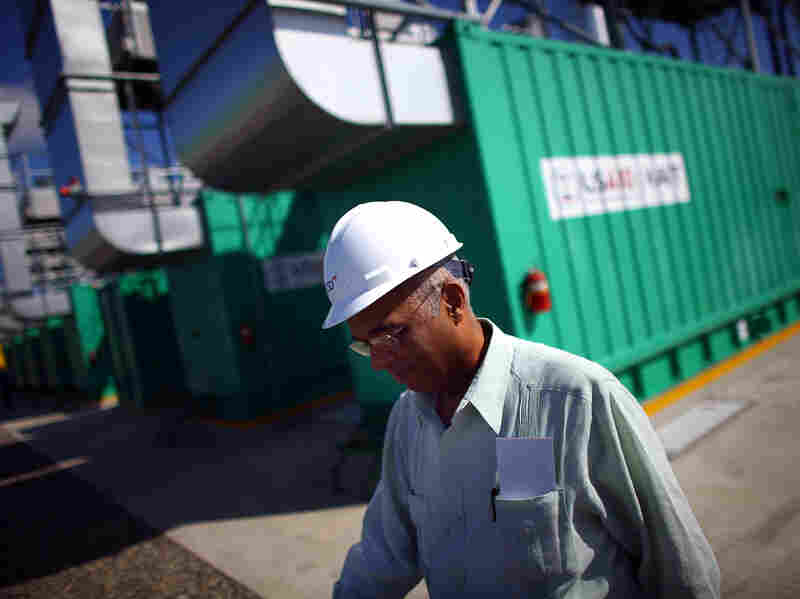 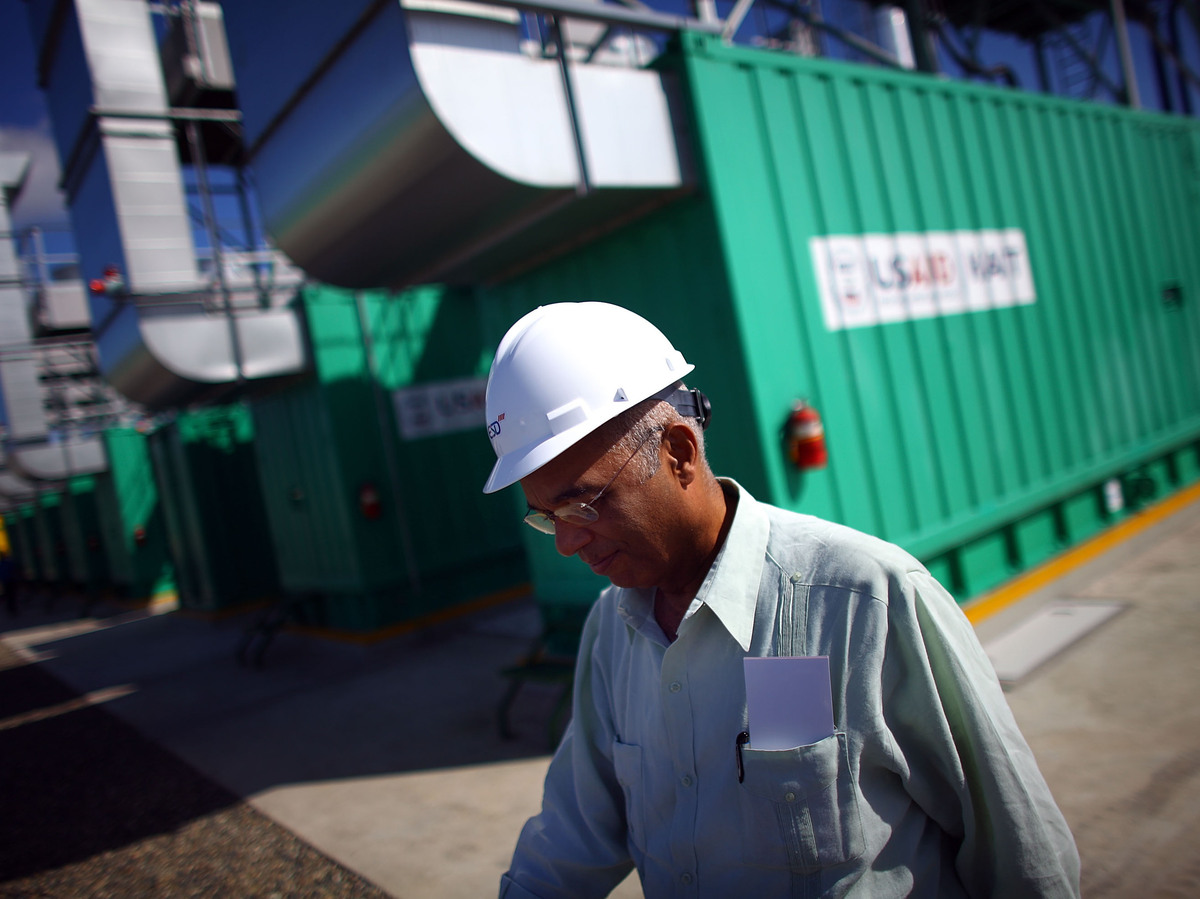 Electricity at the park comes from a 10-megawatt power plant installed by the U.S. Agency for International Development, or USAID. Sassine says the generators provide electricity not just to the park but also to the surrounding communities, which never had power before.

"The whole idea is not only to create jobs, but to see if we can create better living conditions for everybody around," Sassine says. "That's what it's all about."

Many local residents shrug off the arrival of electricity, however, saying they can't afford to pay for it.

Caracol feels as if it's in the middle of nowhere, and that's exactly what the project's planners intended.

One of the reasons the 2010 earthquake was so deadly is that over the past four decades, hundreds of thousands of Haitians migrated to Port-au-Prince, Haiti's capital, looking for work. When the quake hit, many of them were packed into overcrowded, poorly built cinder-block buildings.

Gilles Damais, the head of the Inter-American Development Bank's Haiti office, says Caracol is a critical element of efforts to decentralize Haiti away from the capital.

"Port-au-Prince was built for more or less 250,000 people," Damais says. "And now we have nearly 3 million in the metropolitan area. It's unsustainable. It's impossible to rebuild such a monster."

The IDB has poured more than $130 million into Caracol and expects to spend millions more on the project in 2013.

In addition to the park, the IDB and USAID are constructing thousands of new houses nearby. The Dominican government, as its primary earthquake relief gesture to Haiti, built a new public university in the area.

The hope from an economist's point of view is that all of this new activity will spur the growth of other businesses and that a rising tide will lift all boats.

For Your Next Caribbean Vacation, Haiti ... Maybe?

Port-Au-Prince: A City Of Millions, With No Sewer System

But Haiti has had clothing factories for decades, and it's still the poorest country in the hemisphere. The notorious slum of Cite Soleil began as housing for garment workers in Port-au-Prince's export zone.

Pierre Telemaque, who has worked at textile plants in the capital for the past decade, says these jobs don't offer a path out of poverty. A typical salary of $5 to $7 a day, he says, isn't enough to live on.

Transportation alone costs approximately $1.50, Telemaque says. Then if the worker buys something to eat for breakfast and something at lunch, she ends up taking home just a dollar or two a day, he says, adding that most workers can't even afford to rent a small room.

But in a country where 70 percent of the population lacks regular employment, Sassine of the Caracol Industrial Park argues that textile jobs at least provide a steady income.

"Wages are never enough to lift people out of poverty, especially in a poor country," Sassine says.

Pointing toward the roughly 1,000 women who've recently been hired at the SAE-A T-shirt plant, Sassine says these women are now bringing money into the entire community.

That amount — 200 Haitian gourdes — is the minimum daily wage allowed by law. It's worth roughly $5. Sassine says it may not be much, but at least it improves workers' living standards — and it's better than no job at all.