Accessibility links
The Drug Laws That Changed How We Punish Forty years ago, New York enacted tough laws in response to a wave of drug-related crime. They became known as the Rockefeller drug laws, and they set the standard for states looking to get tough on crime. But a new debate is under way over the effectiveness of such strict sentencing laws. 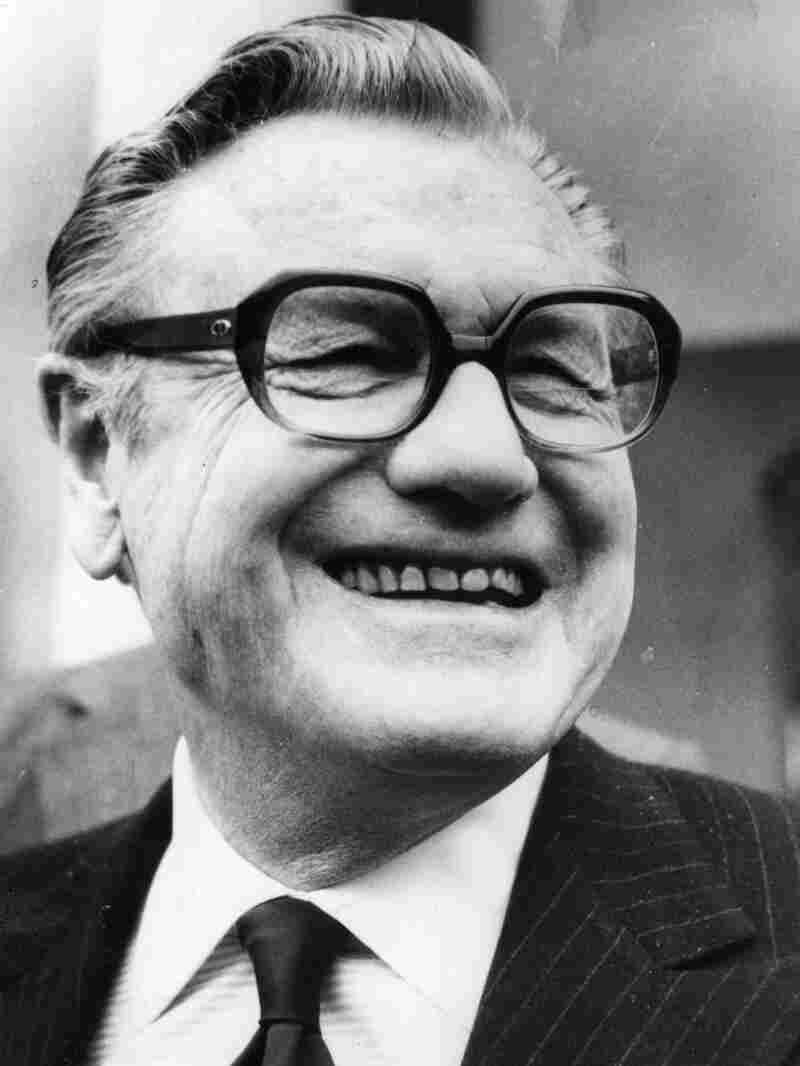 New York Gov. Nelson Rockefeller had been a champion of drug rehabilitation, job training and housing. Then, he did a dramatic about-face and backed strict sentences for low-level criminals. Central Press/Getty Images hide caption 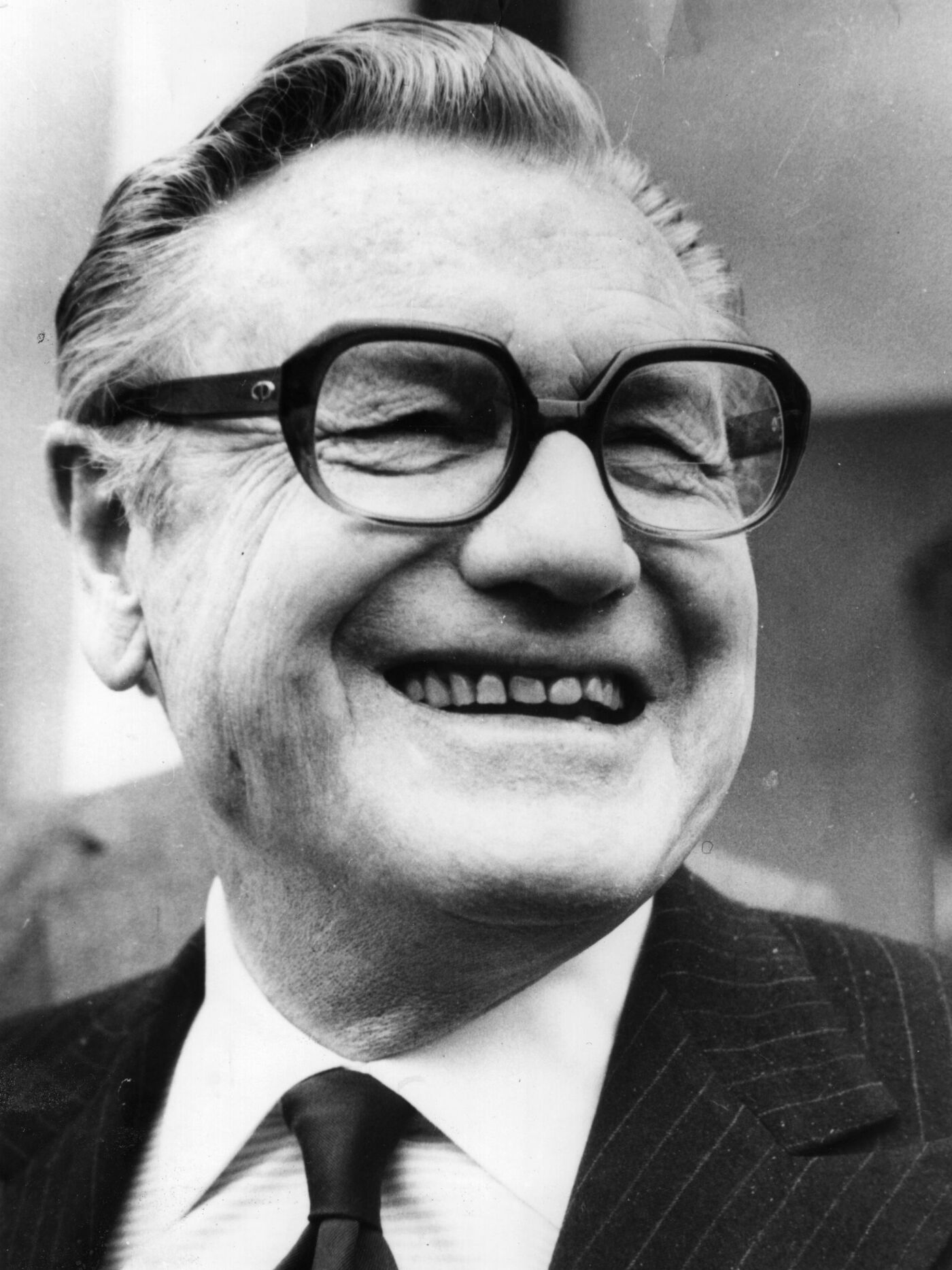 New York Gov. Nelson Rockefeller had been a champion of drug rehabilitation, job training and housing. Then, he did a dramatic about-face and backed strict sentences for low-level criminals.

The United States puts more people behind bars than any other country, five times as many per capita compared with Britain or Spain.

It wasn't always like this. Half a century ago, relatively few people were locked up, and those inmates generally served short sentences. But 40 years ago, New York passed strict sentencing guidelines known as the "Rockefeller drug laws" — after their champion, Gov. Nelson Rockefeller — that put even low-level criminals behind bars for decades.

Those tough-on-crime policies became the new normal across the country. But a new debate is under way over the effectiveness of tough sentencing laws.

In a little town in northern New York called Ray Brook, an old hospital and a complex for athletes who competed in the Winter Olympics in nearby Lake Placid now house inmates. One is a state prison, the other a federal correctional facility.

They're part of a massive infrastructure that sprang up in America over the past 40 years, a prison network that now houses more than 2 million people. The thing that sparked the prison boom was a new set of ideas about how communities and neighborhoods could be made safer.

Rewind to the 1970s. New York City was battling a heroin epidemic; there were junkies on street corners. The homicide rate was four times as high as it is today.

Rockefeller, New York's Republican governor, had backed drug rehabilitation, job training and housing. He saw drugs as a social problem, not a criminal one.

But the political mood was hardening. President Richard Nixon declared a national war on drugs, and movies like The French Connection and Panic in Needle Park helped spread the sense that America's cities were unraveling.

Late in 1972, one of Rockefeller's closest aides, Joseph Persico, was in a meeting with the governor. He says Rockefeller suddenly did a dramatic about-face.

"Finally he turned and said, 'For drug pushing, life sentence, no parole, no probation," says Persico.

That was the moment when one of the seeds of the modern prison system was planted.

Persico says Rockefeller decided that more progressive approaches to drug addiction had simply failed. The governor had heard about this new, zero-tolerance approach to crime while studying Japan's war on drugs.

I have one goal and one objective, and that is to stop the pushing of drugs and to protect the innocent victim.

"And we all looked a little bit shocked, and one of the staff said, 'Sounds a little bit severe.' And he said, 'That's because you don't understand the problem.' And then we realized he was very serious," Persico says.

Rockefeller launched his campaign to toughen New York's laws at a press conference in January 1973 — almost exactly 40 years ago. He called for something unheard of: mandatory prison sentences of 15 years to life for drug dealers and addicts — even those caught with small amounts of marijuana, cocaine or heroin.

"I have one goal and one objective, and that is to stop the pushing of drugs and to protect the innocent victim," Rockefeller said.

Getting Tough Catches On

From the start, Rockefeller's policy drew sharp criticism from drug treatment experts and some politicians, who called the sentences draconian.

But no one really understood what the laws would mean or how many millions of people they would touch.

Albert Rosenblatt was a prosecutor at the time and wrote the first book detailing how district attorneys would implement the new rules.

"I don't remember thinking or believing, nor did my colleague DAs at the time, that this was going to somehow revolutionize and change everything," Rosenblatt says. 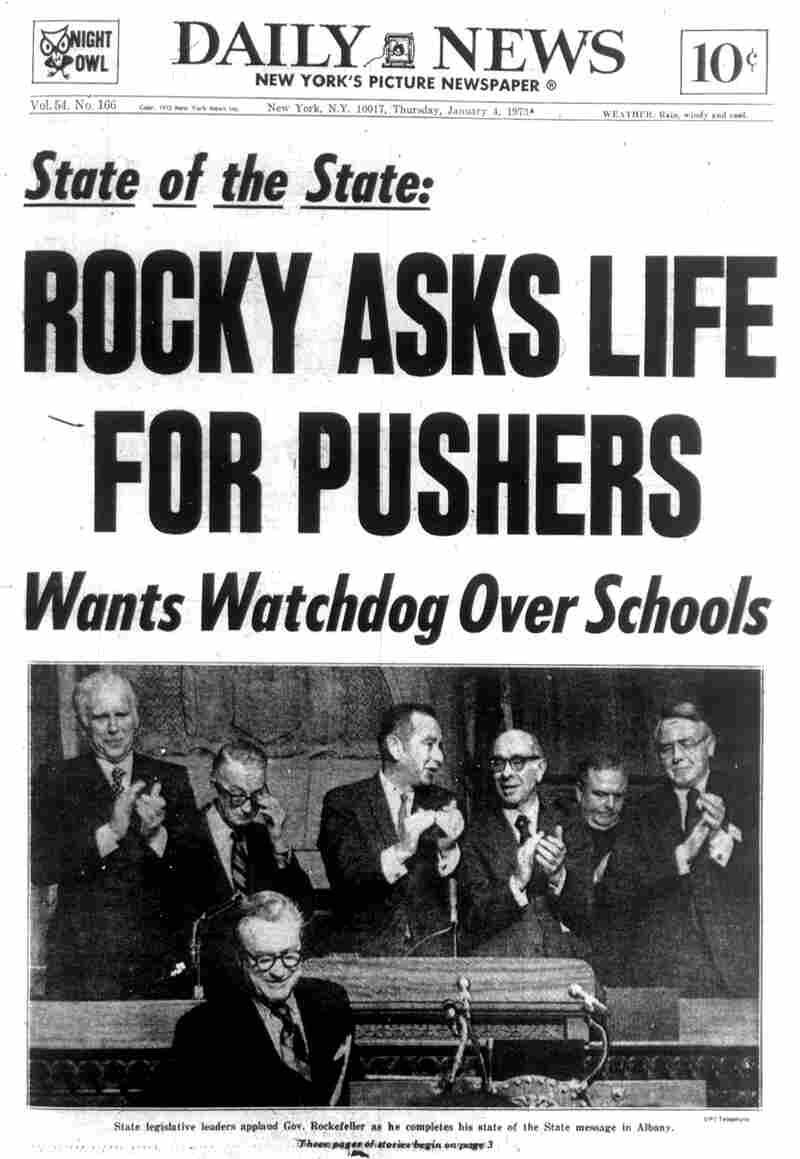 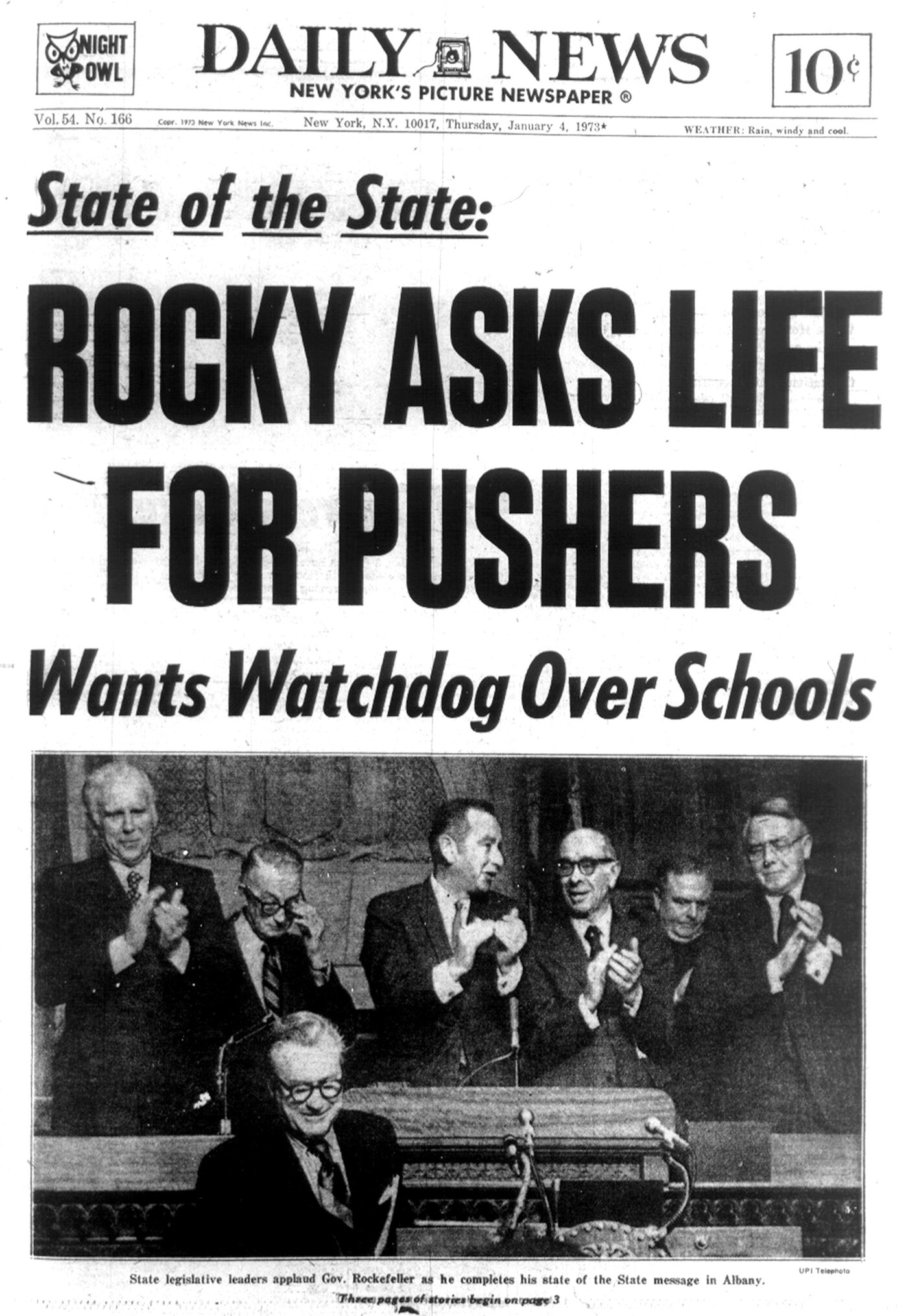 The Jan. 4, 1973, edition of the New York Daily News reports that Gov. Rockefeller's State of the State speech called for a life sentence for drug pushers.

The Rockefeller drug laws sailed through New York's Legislature. And pretty quickly this idea of getting tough, even on petty criminals, went viral, spreading across the U.S. Other states started adopting mandatory minimum and three-strikes laws — and so did the federal government.

But Rosenblatt says prosecutors in New York realized that the laws were doing unexpected and troubling things. White people were using a lot of drugs in the 1970s and committing a lot of crimes, yet the people being arrested and sent to prison under the Rockefeller laws came almost entirely from poor black and Hispanic neighborhoods.

Due in part to Rockefeller-style laws, the nation's prison population exploded from 330,000 in 1973 to a peak of 2.3 million. That meant building hundreds of new state and federal prisons. By 2010, more than 490,000 people were working as prison guards.

The House That Rockefeller Built

Journalist and historian Scott Christianson has written for decades about drug crime and America's prison system. He says we're just coming to terms with the impact of these policies — on poor neighborhoods, on race relations and on taxpayers.

"I think that this state and our society really has to do some hard thinking and to reflect on the impact of this long-term war on drugs — what it has meant for our society and what it has cost," Christianson says.

Cost is one thing driving this re-examination. Studies put the price tag of America's vast prison system at between $63 billion and $75 billion a year.

New York's sentencing rules were partially reformed in 2009, contributing to the closure of nine state prisons so far. Politicians in other cash-strapped states like California have also moved to slash the number of people behind bars. But most of the country still lives in the house that Rockefeller built.

Half a million Americans are serving long sentences for nonviolent drug offenses. Those inmates make up 48 percent of the inmate population in federal prisons.

Persico, the aide who helped push through Rockefeller's drug laws, says new scrutiny for the policy is overdue.

"I concluded very early that this was a failure. It's filling up the prisons, first-time offenders," Persico says. "This was obviously unjust — and not just unjust, it was unwise; it was ineffective."

This debate is far from over. Supporters of mandatory minimums say the policy has helped reduce crime in some cities, including New York, and they point to modest declines in the use of some drugs, particularly cocaine. Persico says Rockefeller himself never expressed any second thoughts or reservations about the policy that carries his name.

This story is produced by NPR in cooperation with North Country Public Radio's Prison Time Media Project, a year-long investigative series looking at the national impact of Rockefeller-style laws.