Accessibility links
Artist Works To Keep Immigrants In The Picture Ramiro Gomez Jr. is an artist — and nanny — who places cardboard paintings of domestic workers in affluent Los Angeles neighborhoods. Some people see him as an activist, but Gomez shies away from that label; he just hopes his project will help to humanize immigrant workers.

Artist Works To Keep Immigrants In The Picture

Artist Works To Keep Immigrants In The Picture 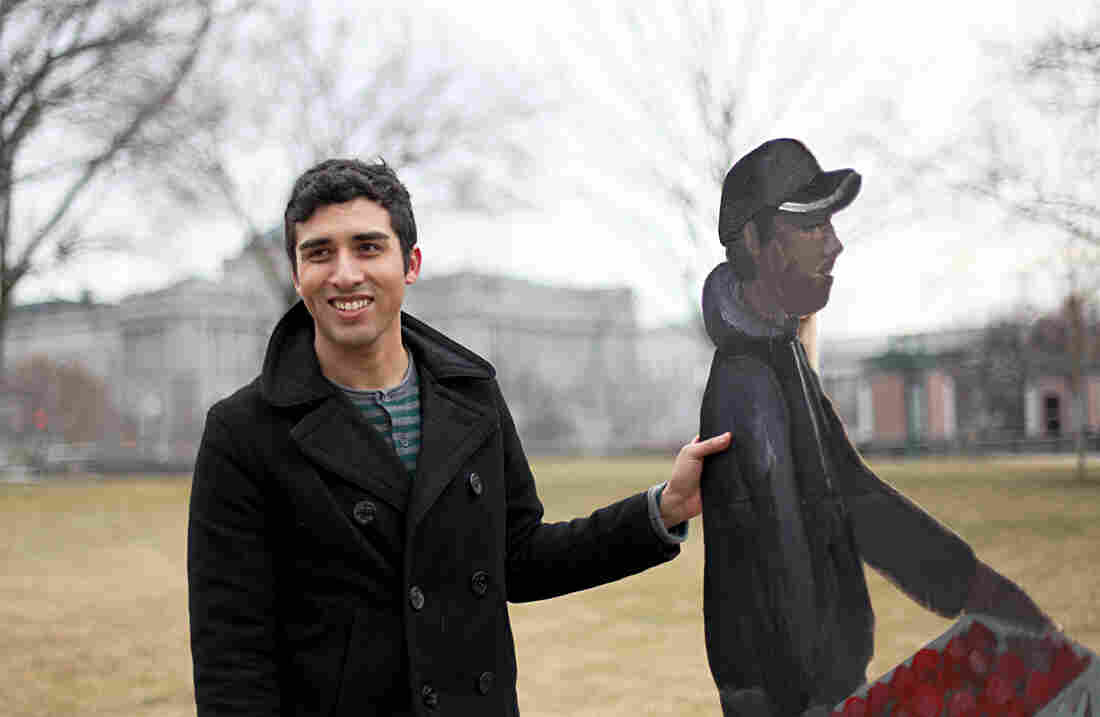 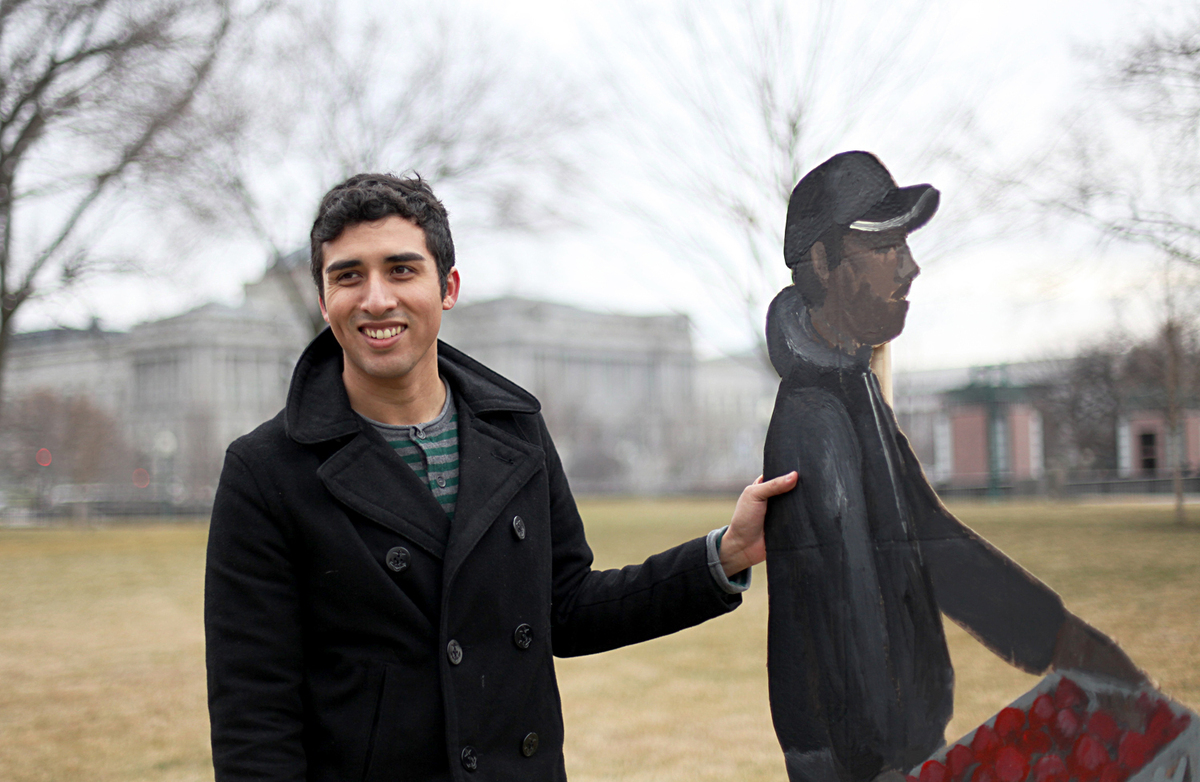 Ramiro Gomez Jr. is working fast enough to draw the least amount of attention, but slowly enough to make every detail stand out. He describes the rush he gets as "therapeutic."

Gomez has created inserts on a human-size piece of cardboard, and with a pair of pliers he begins to lace wire to it. He then grabs tools to prop the cardboard piece up for display. He chooses his spot at a towering shrubbery fence at a busy intersection in Bel Air, Calif., a neighborhood known for its luxury and Hollywood star dwellers. What stands before him, and the public, is an acrylic-painted cardboard cutout of an immigrant worker with a "Star Maps Here" sign.

Sometimes people leave their self-esteem at the border."

Xiomara Corpeño, director of organizing at the Coalition of Humane Immigrant Rights of Los Angeles

The artist says he is "documenting the undocumented" by placing his art in affluent communities, places where these workers are often invisible. These cardboard people have gone up on famous streets and in residential areas and public parks.

This week — the same week when immigration reform was mentioned in the president's State of the Union address and the GOP response given by Florida Sen. Marco Rubio — the 26-year-old artist took his statement to the nation's capital.

"It still hasn't hit me that I'm in Washington," Gomez says, "and it probably won't until I get home and reflect."

From White Picket Fences To The White House

The Los Angeles-based artist was invited to lead an art workshop at the United Workers Congress, which took place in Washington, D.C., this week. Some 250 immigrant workers and labor-rights organizers came together to rally for an inclusive path to citizenship for domestic workers and day laborers.

Xiomara Corpeño, director of organizing at the Coalition of Humane Immigrant Rights of Los Angeles, says one of the main issues in immigration is that workers often face discrimination from employers and even family members and friends. 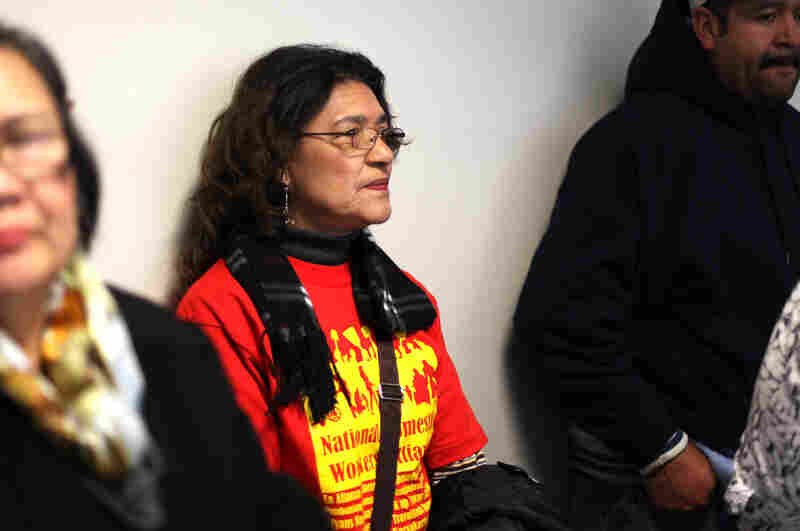 Eva Aucapina, originally from Ecuador, has been a domestic worker for more than 15 years. She traveled from Los Angeles with CHIRLA, a pro-immigrant-rights group, to Washington, D.C., this week to attend a Senate Judiciary Committee hearing on immigration. Lizzie Chen/NPR hide caption 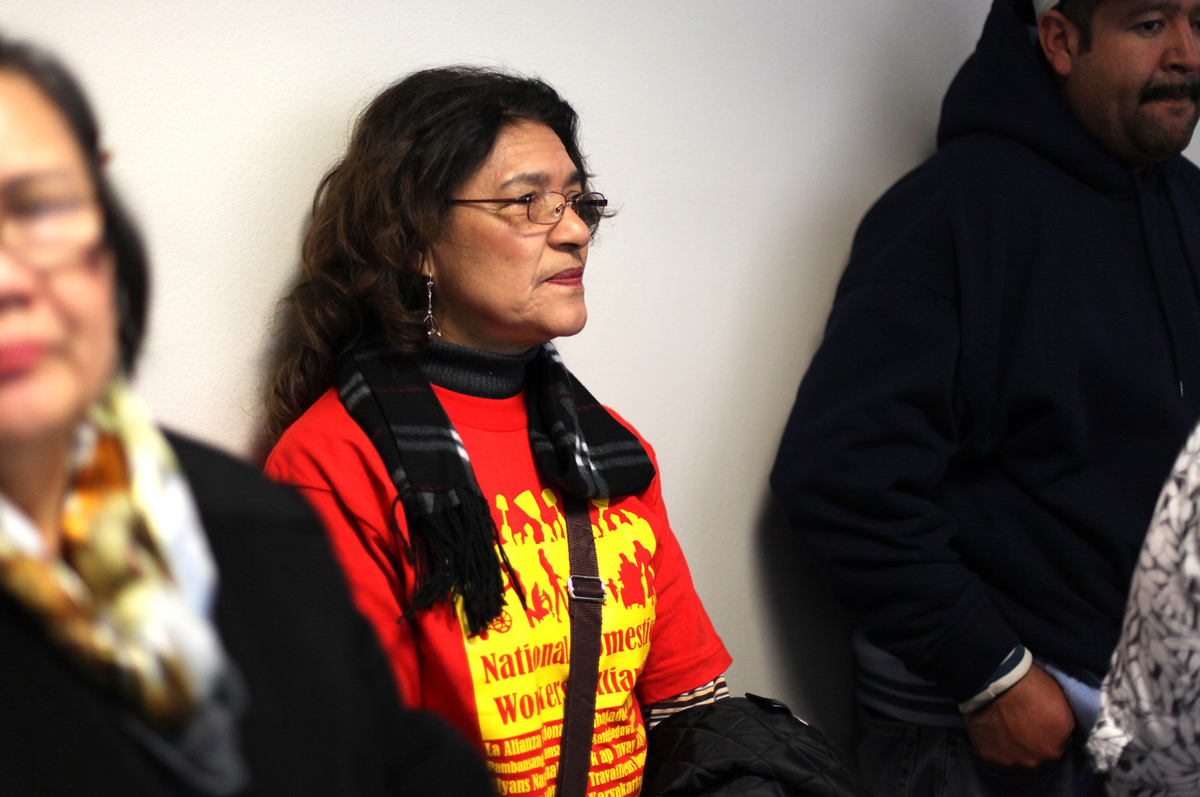 Eva Aucapina, originally from Ecuador, has been a domestic worker for more than 15 years. She traveled from Los Angeles with CHIRLA, a pro-immigrant-rights group, to Washington, D.C., this week to attend a Senate Judiciary Committee hearing on immigration.

"Sometimes people leave their self-esteem at the border," Corpeño says. It's a problem caused by the negative rhetoric around the immigration issue, she adds.

And the perception of these workers is what Gomez's work targets.

"Think about this: When someone comes to work for you, that person has humanity," he says.

On Tuesday, the artist tried to show that humanity in front of the White House by placing a cutout of a family of four on the outside of the fence looking in. He had to remove it.

The next day, he took a cardboard creation of strawberry pickers to the Capitol's East Lawn. They sat there, briefly, until a police officer asked for a permit. Gomez reluctantly took them down.

But despite his persistence, Gomez says he is not an activist. He bases his art on his life, his family and his work as a nanny. His own experiences as a domestic worker.

"I'm doing everything based on my life," he says. "I cannot present what is not there."

A Living Room Ad And An Idea

But before the Capitol and the White House, there were magazine ads.

Gomez grew up San Bernardino, Calif., and moved to Hollywood in 2009 after dropping out of the California Institute of the Arts and his grandmother died. Trying to move past the low moment and with limited options, he picked up a baby-sitting gig.

That's when it all started.

After a frustrating day at work, he took out his emotions on a living room magazine ad, altering it by making its walls bleed with paint. He says it eased his tension. It was the first of several such pieces.

Soon he turned from customizing ads and shifted to painting housekeepers without facial details — a way to showcase impersonal relationships between employers and the employees who were performing chores in their large, extravagant homes.

To add a human element, Gomez always gives his pieces a name. They're usually titled after a composite of characters he's come across — whether it's a family member or a household worker he's befriended while baby-sitting — and pseudonyms he makes up, such as Guillermina and Genaro.

Eva Aucapina liked Gomez's project when she viewed it at the workers event this week. She's an Ecuadorean domestic worker who has been taking care of children and cleaning homes in Los Angeles for about 15 years.

"The art is great," she says in Spanish. "It means people are noticing that we're doing an honorable job." 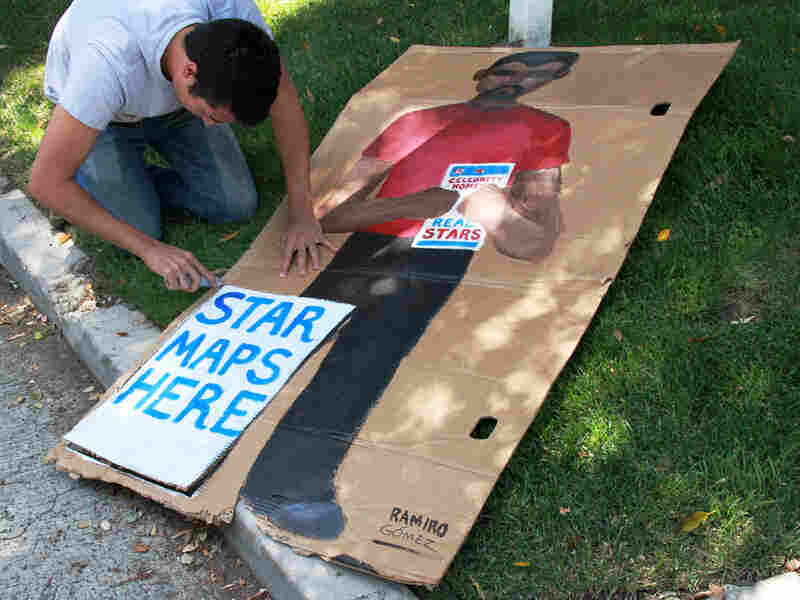 Gomez works on a piece that he later removed after a man selling maps to celebrities' homes threatened to take it down. Brian De Los Santos/NPR hide caption 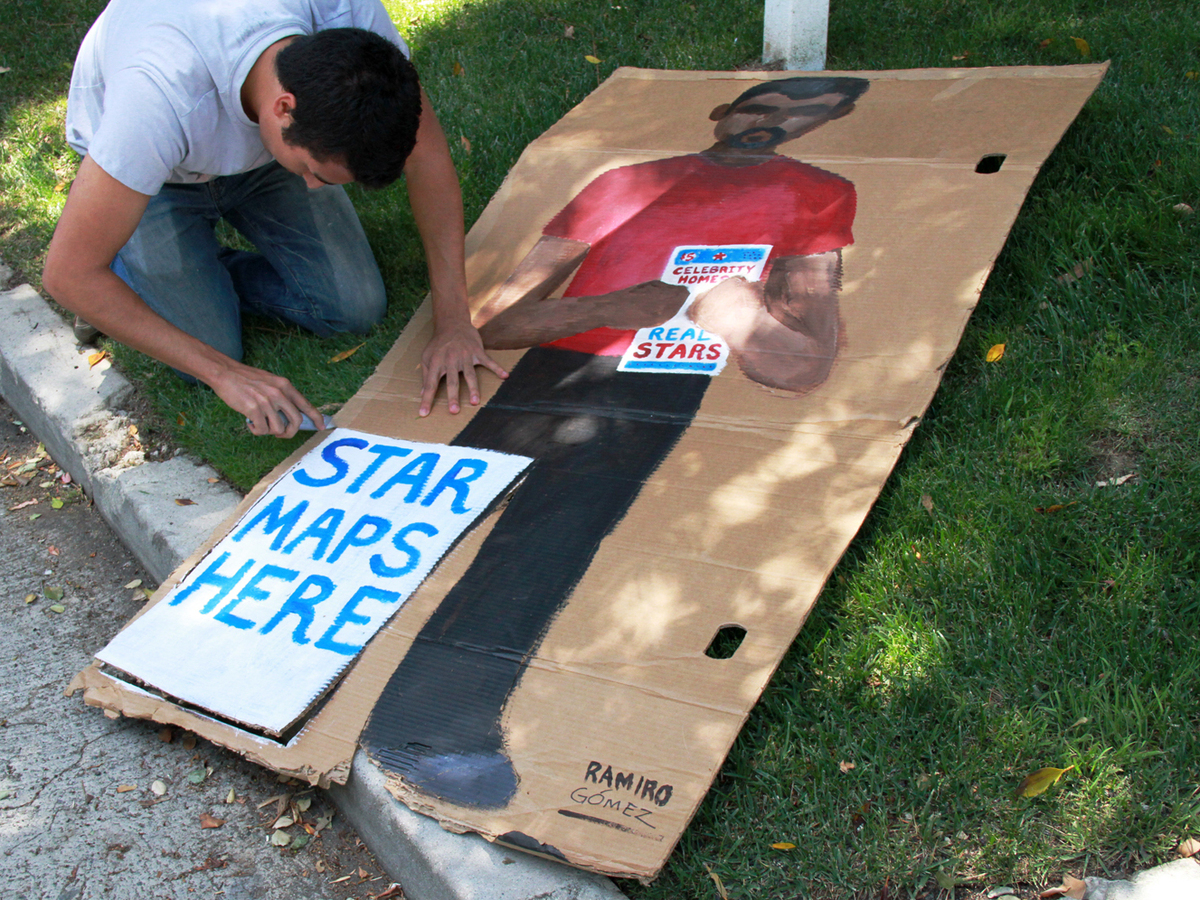 Gomez works on a piece that he later removed after a man selling maps to celebrities' homes threatened to take it down.

"Ramiro ... is targeting a situation that is concerning him and giving it a new look at that stereotype and a new voice," says Gronk, an L.A.-based Chicano artist and former member of the art collective Asco.

But some say Gomez is reinforcing the stereotypes he's trying to erase with paint.

Last summer, he was confronted by an immigrant worker. It was the first time Gomez had experienced opposition from the kinds of people he was painting.

The man, who was selling celebrity home maps on a shaded corner, told Gomez he was being discriminatory by portraying him with dark skin and was scaring business away. The worker warned if he didn't take the painting down, he would do it himself.

Gomez tried to explain the purpose of the project, but the man didn't see — or care about — his point of view. The response shook the artist and he removed the cardboard piece, which depicted a maps vendor.

"I'm not taking it as a sense of a personal attack," he said at the time. "When I encounter these moments, the first thing that comes to mind is: learn."