Accessibility links
Decades On, Stiff Drug Sentence Leaves A Life 'Dismantled' George Prendes was 23 when he was sentenced under New York's Rockefeller drug laws — tough mandatory sentencing guidelines for nonviolent drug crimes. The 15 years Prendes served for a drug transaction still reverberate for him and his family. 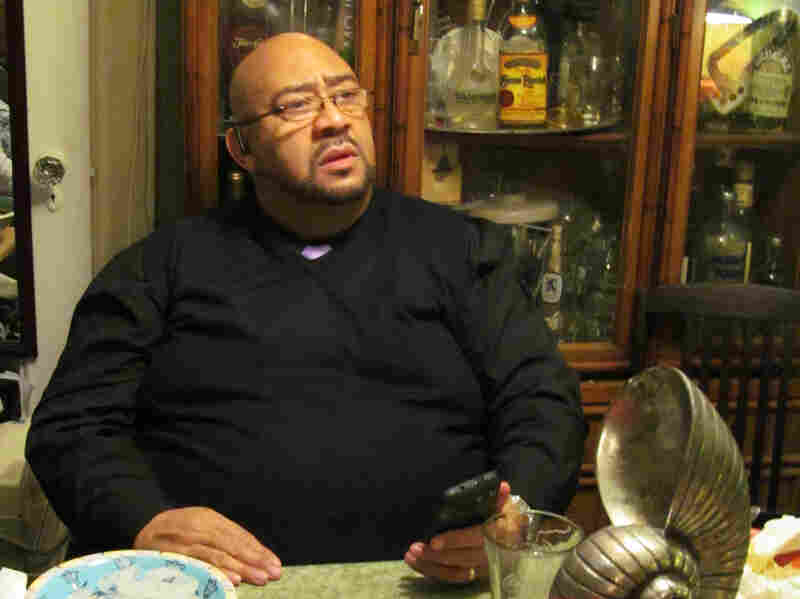 Now 59, George Prendes works as a telemarketer in New York and struggles to make the rent on his small Bronx apartment. Natasha Haverty hide caption 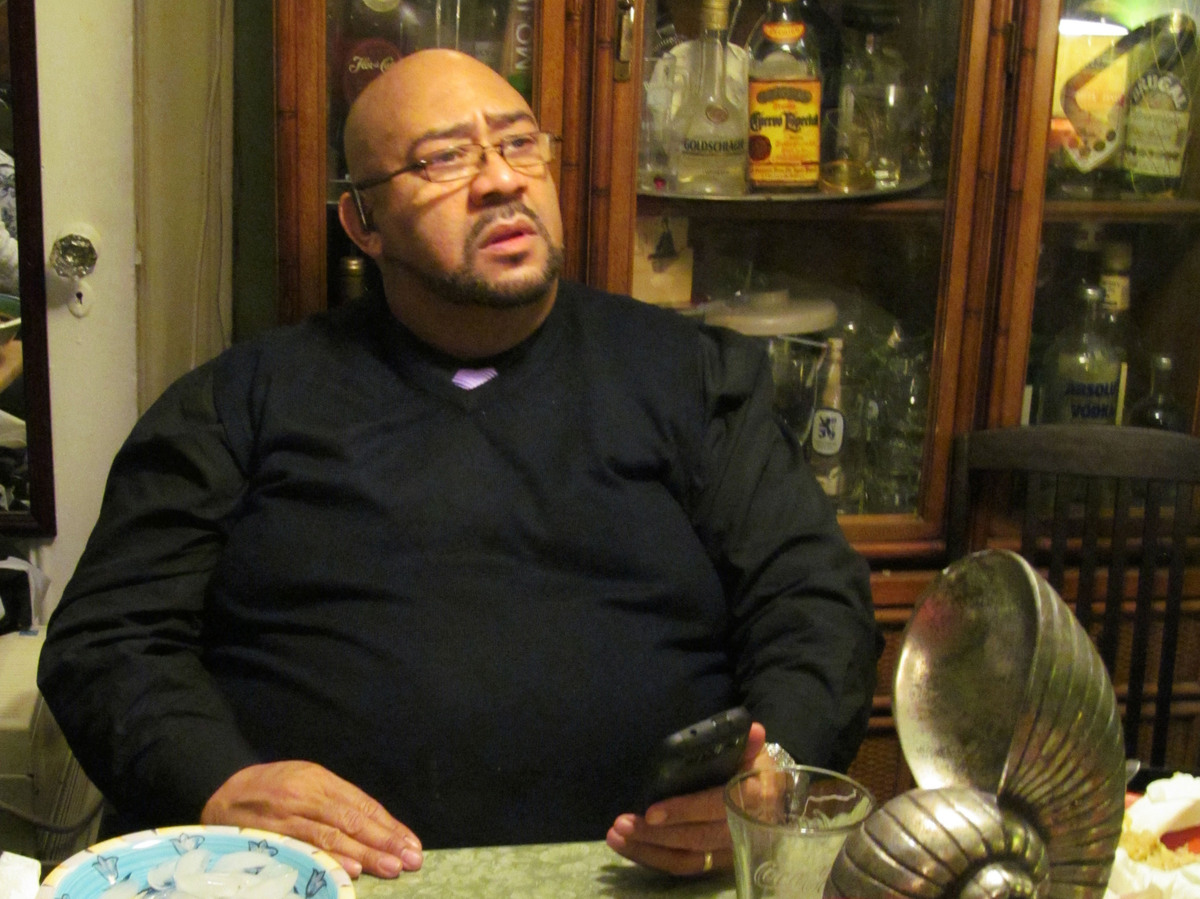 Now 59, George Prendes works as a telemarketer in New York and struggles to make the rent on his small Bronx apartment.

There are roughly half a million people behind bars for nonviolent drug crimes in America. But no one really knows how many people have been sentenced to long prison bids since the laws known as Rockefeller drug laws first passed 40 years ago.

What's clear is that tough sentencing laws, even for low-level drug dealers and addicts, shaped a generation of young men, especially black and Hispanic men.

Men like George Prendes, now 59. Born in Cuba, he now works long hours as a telemarketer, barely making rent on his tiny, cluttered apartment in the Bronx.

"It's just the drudgery," Prendes says of his life today. "I mean at my age, I shouldn't be struggling like this."

His wife, Yvonne, says prison carved a hole in the middle of Prendes' life.

"His experience damaged a part of him, you know? Wanting to recuperate the time lost," she says. "And you just can't do that. You can't get those 15 years back."

'Everyone Was Doing Cocaine'

Prendes was in his early 20s when New York's Legislature set strict mandatory minimum prison sentences of 15 years to life for nonviolent drug crimes. Prendes says he had no idea the rules were changing.

"Everyone was doing cocaine. And I met judges, I met lawyers, I met a lot of affluent people, and to me that was a sign of affluence," he says. "So I did a little coke here and there."

Prendes says he was broke and facing eviction from his apartment when, in 1977, he made the big mistake that put him in the crosshairs of the new laws: He agreed to help with a drug deal, selling a pound of cocaine upstate in Rochester, N.Y. It was a sting. 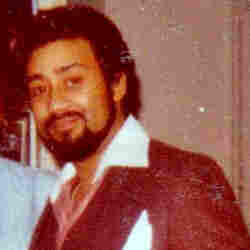 George Prendes was 23 in 1977 when he was arrested for dealing cocaine. Courtesy of Yvonne Prendes hide caption 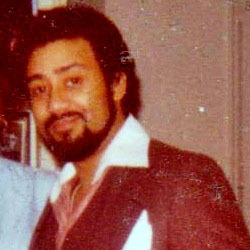 George Prendes was 23 in 1977 when he was arrested for dealing cocaine.

"They bust down the door, and there's like 20 cops in the other room," Prendes recalls. "They came in — I remember the guy walked right up to me. I was stunned. And the guy punched me right in the face."

The way Prendes tells it, he had no idea at first that the new Rockefeller law, named after New York Gov. Nelson Rockefeller, was sending thousands more people to prison every year for longer prison sentences.

The guy who did understand the consequences was Robert King, the young assistant district attorney assigned to prosecute Prendes.

"I felt very comfortable ... with the conviction," King says. "I think the evidence in the case clearly supported his conviction. The sentencing rules were what they were. So it was kind of out of my hands, really."

Advocates of lengthy prison sentences, including many prosecutors, are convinced that they deter crime and slow the spread of illegal drugs.

A Disproportionate Effect On Minority Men

Prendes was a first-time offender, and no one saw him as a kingpin drug dealer. But under the Rockefeller law, he spent the next 15 years in maximum security prison with no chance for parole.

"I don't know if people realize that with a sentence like that, it takes away not only from the person — it takes away from the family," says Mercedes Prendes Estrada, Prendes' sister, through tears.

She's in her 50s now, but was a teenager when Prendes went away to prison. She says their mother spent years and all the family's money trying to help him.

"It really — dismantled [us]," Mercedes says. "It was like a bomb. It had a profound effect that you don't come back from."

In a way, the Prendes family's experience is a new part of the American story. Mandatory minimum sentencing rules for drugs and other nonviolent crimes are now on the books in almost every state. Nearly half the inmates in federal prison are serving time on drug charges.

Studies show the overwhelming majority of people sentenced under Rockefeller-style laws are black and Hispanic men, despite the fact that there's a lot of drug use in white communities.

"I think the intentions were good," King says. "Whether or not it achieved the results, I'd say that they have not." 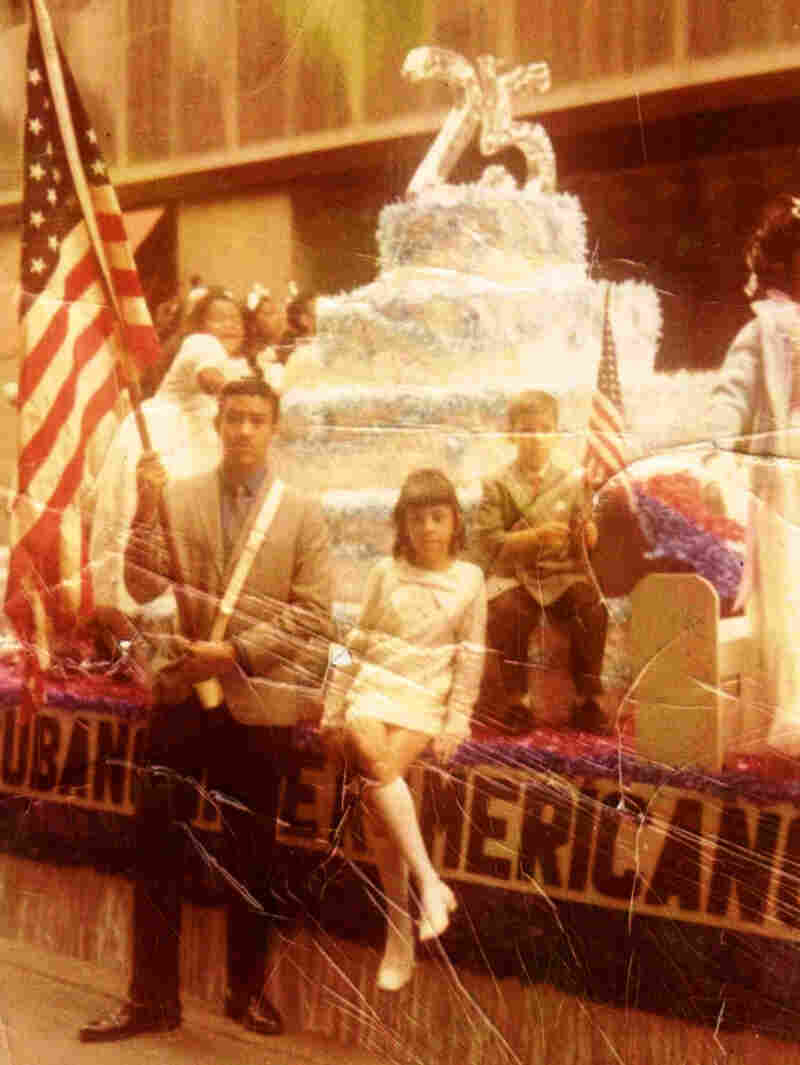 George Prendes (left), with siblings Mercedes and Roberto at a Cuban-American parade in New York in the early 1970s. The family spent their savings trying to assist George after his arrest. Courtesy of Yvonne Prendes hide caption 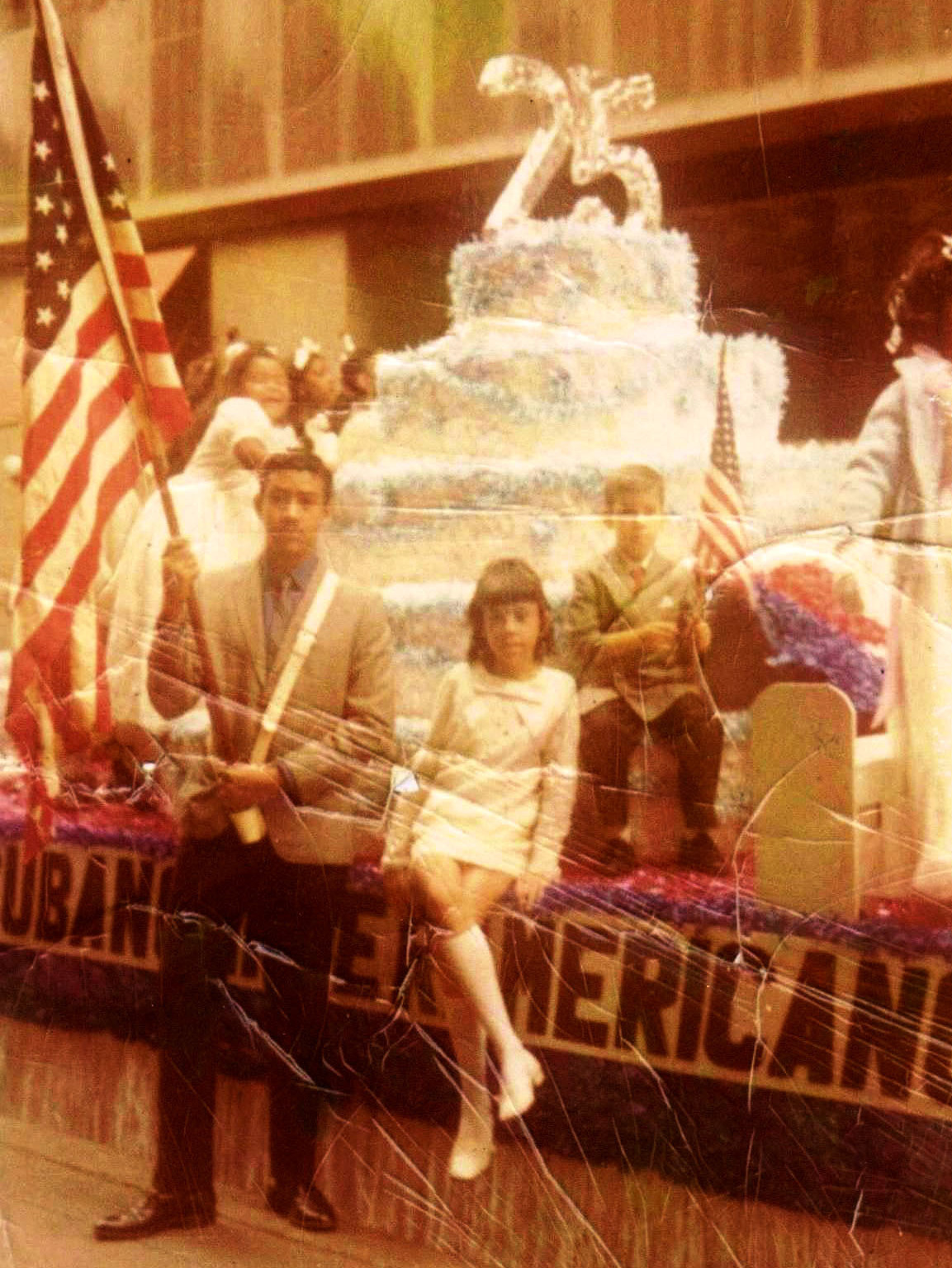 George Prendes (left), with siblings Mercedes and Roberto at a Cuban-American parade in New York in the early 1970s. The family spent their savings trying to assist George after his arrest.

'A Big Chunk Of My Life'

King, who put Prendes behind bars, is part of a growing movement of onetime supporters of mandatory prison sentences who now say they have doubts about their effectiveness and their fairness.

"I have a son who's about to turn 30. And so we were talking about this case and he was enraged by the sentence. He said, 'That's ridiculous,' " King says. "And I think by today's standards, I think most people would look at this — and I guess I would look at it — and say that sentence was disproportionate."

Rockefeller-style laws are still the norm in the U.S. With more than 2.3 million Americans behind bars, incarceration rates are still rising in some states.

But the high cost of operating prisons has led other states to ease sentencing rules — leading to significant declines in inmate populations in California and New York.

Under New York's modified sentencing guidelines, passed in 2009, Prendes might have served as little as one year behind bars before being released for parole or sent for drug counseling.

"You try not to be bitter. I mean, I was 23 years old when I got arrested. I got out of prison when I was 37," Prendes says. "That's a big chunk of my life. And there's a lot of things that I could have done and didn't do."

So while politicians and prosecutors debate the future of Rockefeller-style laws, millions of former inmates like Prendes are sorting out what they can salvage after decades spent in prison.

This story is produced by NPR in cooperation with North Country Public Radio's Prison Time Media Project, a yearlong investigative series looking at the national impact of Rockefeller-style laws.

A previous caption incorrectly said that George Prendes was arrested for purchasing cocaine. He was actually arrested for dealing the drug.