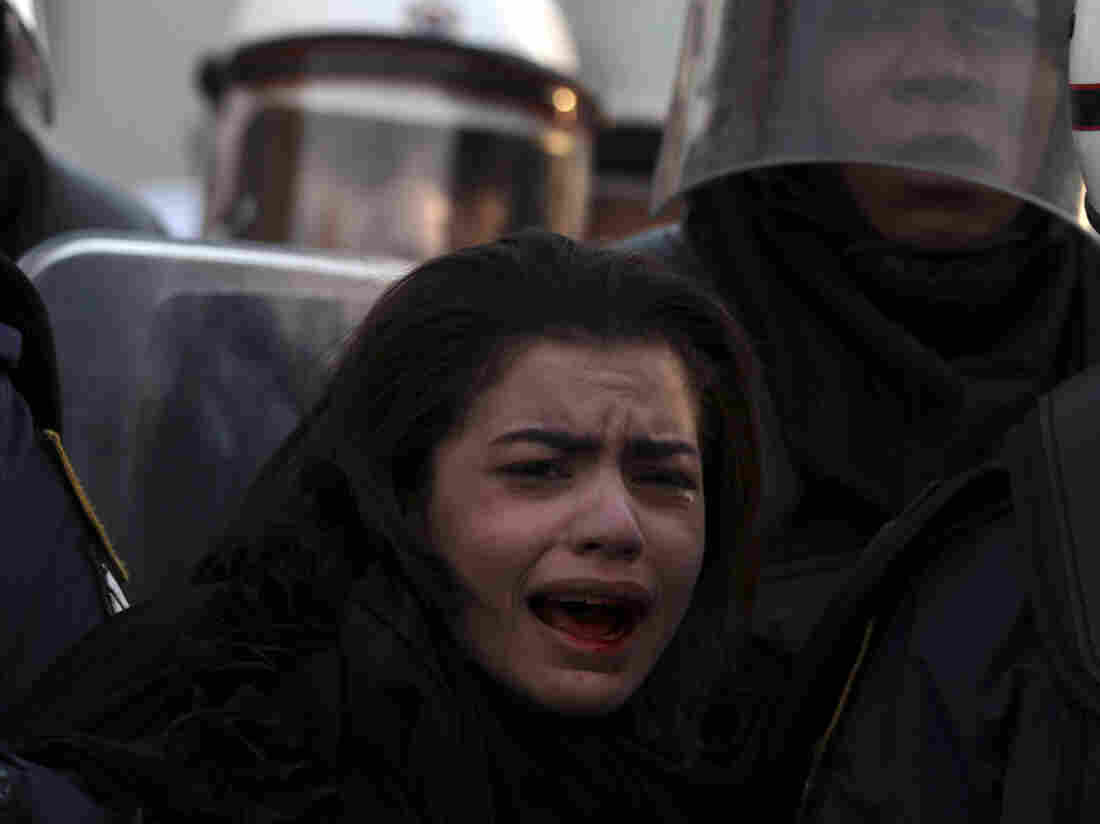 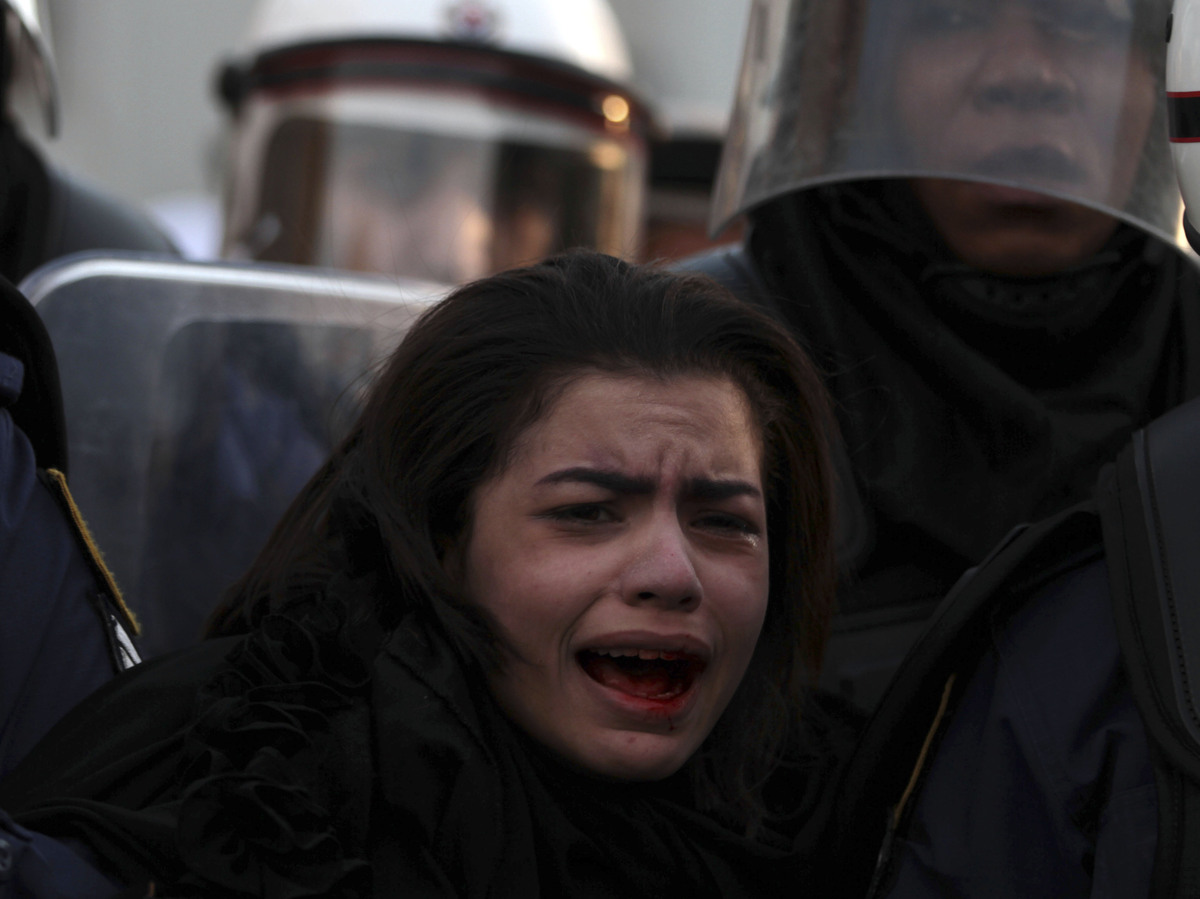 Riot police arrest an anti-government protester during a pro-democracy protest in the Bahraini capital, Manama, on Jan. 18.

The movement opposing Bahrain's autocratic monarchy is gaining strength in what has become the longest-running uprising of the Arab Spring. Feb. 14 marks the revolt's second anniversary. The opposition predicts more demonstrations on Friday.

Two years ago, a diverse movement that included both Shiite and Sunni Muslims united to oppose the dictatorial rule of the Sunni ruling family. The royals have successfully used divide-and-rule tactics, and today the opposition is largely Shiite.

Protests have taken place every day for the past few weeks. A group of six traditional opposition parties, headed by the Al Wefaq National Islamic Society, continue to mobilize the largest numbers. But the Feb. 14 Youth Coalition has challenged those parties with more radical demands and militant tactics.

That's a revolutionary demand in Bahrain, where the Sunni family of King Hamad bin Isa Al Khalifa has ruled since 1820. The same appointed prime minister has held power since 1972.

Despite two years of demonstrations, the opposition says the ruling family has failed to make significant reforms. Shiite Muslims, who make up 70 percent of the population, face systematic discrimination in education, employment and housing.

Tens of thousands of Sunnis from Syria, Jordan, Yemen and Pakistan have been given expedited citizenship as well as access to good jobs and new homes by the regime as Shiites languish, part of a strategy to change the country's demographics while stoking sectarian antipathy.

Sunnis have had religious disputes for centuries with the Shiites, believing that the Prophet Muhammad's successor was wrongfully chosen, among other doctrinal and ritual differences. Authoritarian rulers throughout the region have used the historical antipathies to maintain power, and many of the region's most deeply rooted conflicts arise from Sunni/Shiite rancor.

Government intransigence has fueled the rise of the Feb. 14 Coalition, says Karim Radhi, a leader in the General Federation of Bahrain Trade Unions. 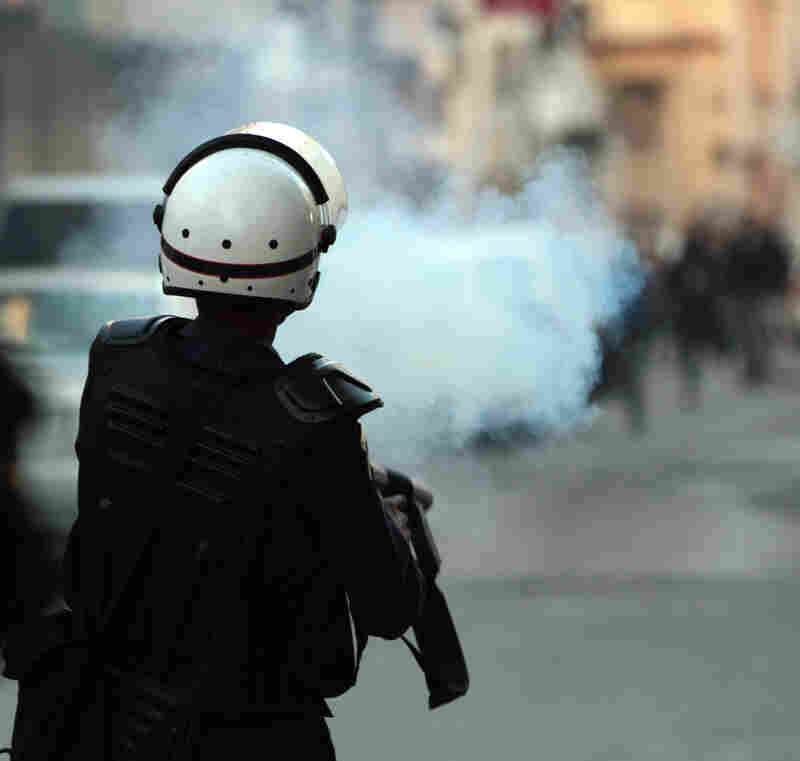 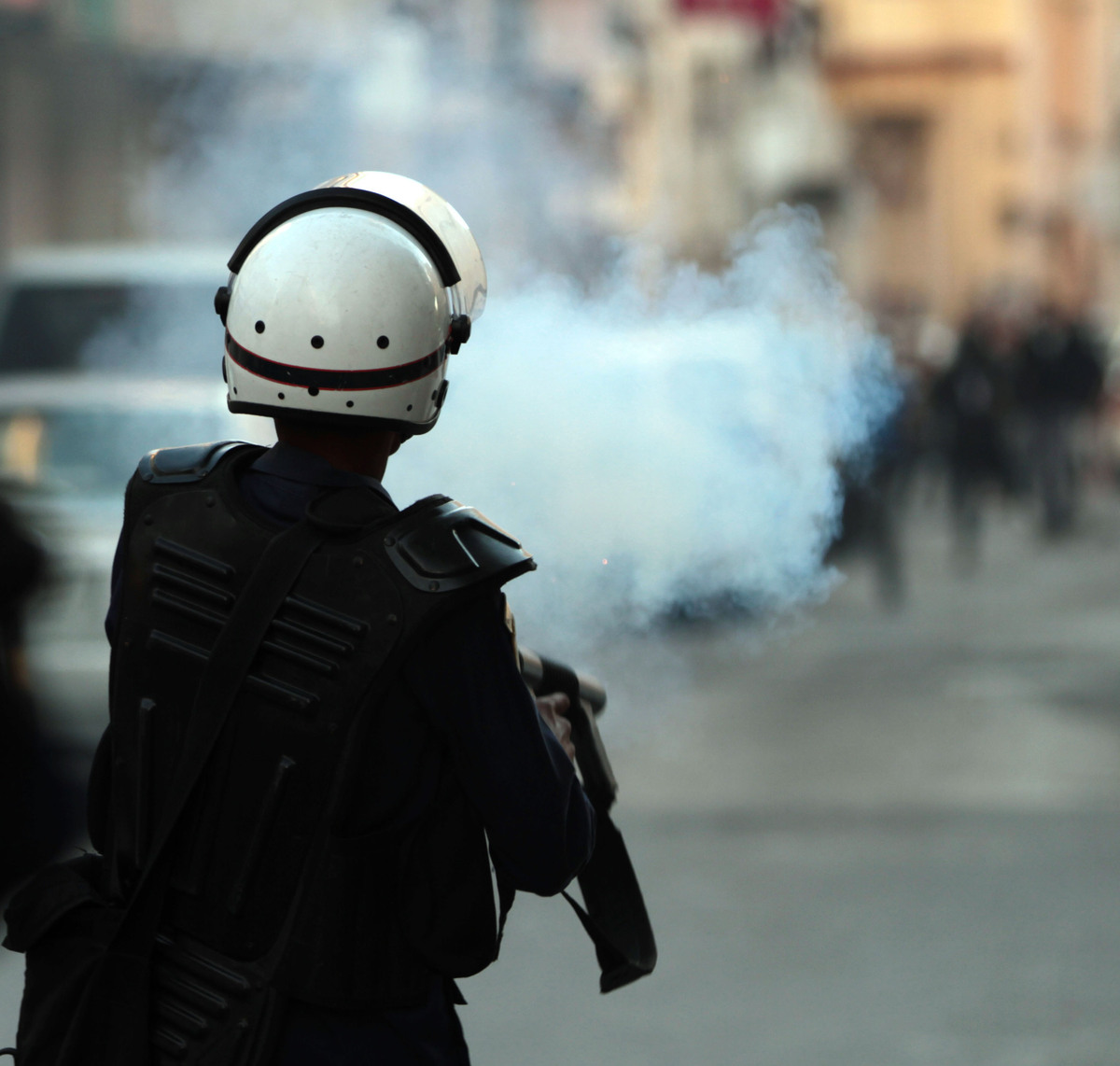 "They are mostly young people," Radhi said, "those who are poor who have nothing to lose. The other parties concentrate on the middle class."

Seeing a rise in militant activity, and as the Feb. 14 second anniversary approached, the government called for a political dialogue with the opposition. The traditional parties cautiously accepted the offer on Sunday, the same day talks were to begin. Both sides remain deeply suspicious of each other, however, and prospects for the dialogue's success remain cloudy.

The two sides remain far apart on possible political reforms. The traditional opposition demands an elected parliament "based on one person, one vote," said Ali Salman, chairman of Al Wefaq. The government should release political prisoners and stop attacking peaceful demonstrations, he added.

"Our key demand is for an elected government," Salman said.

Al Wefaq and other traditional groups accept that final decisions remain with the king, but they want an expansion of parliamentary power.

Sameera Rajab, minister of information, says the government opposes such an elected parliament. Bahrain will insist on keeping the kind of monarchy that exists in nearby Saudi Arabia and other Gulf countries, she said.

"Elected government means a change in regime," Rajab said. It's not appropriate for Bahrain "to have an elected system like in Europe or America. We have our system in the Gulf."

The Feb. 14 Coalition opposed the dialogue from the beginning. 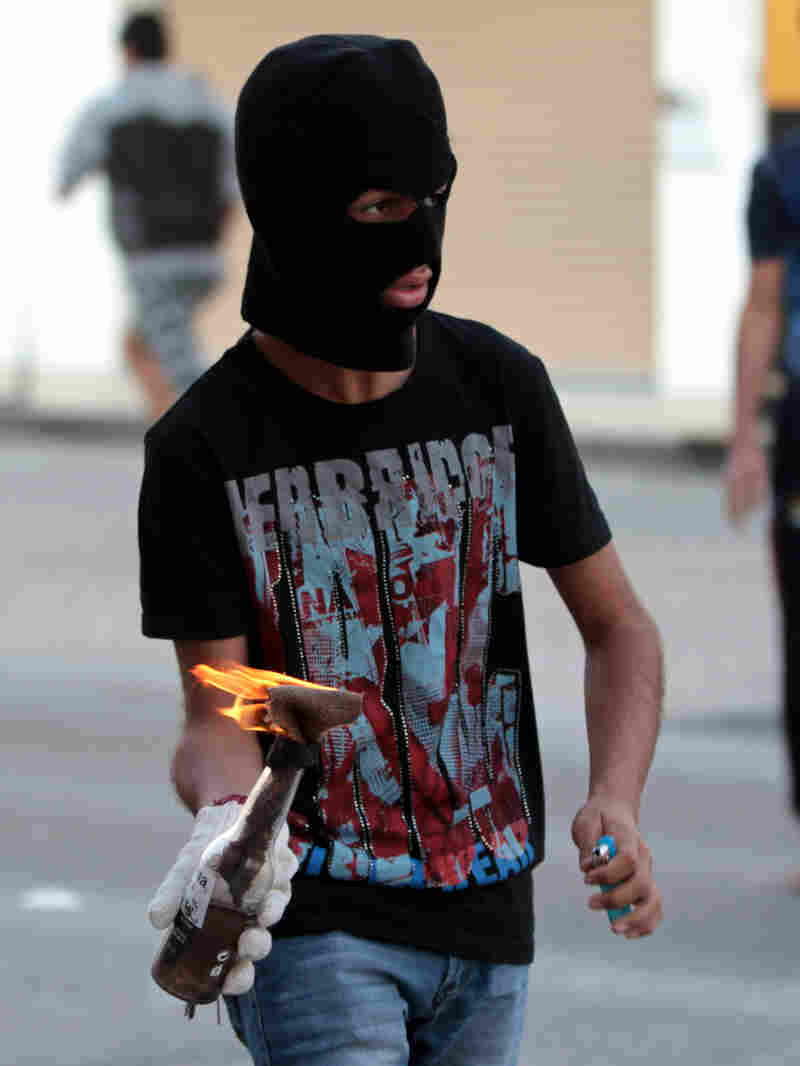 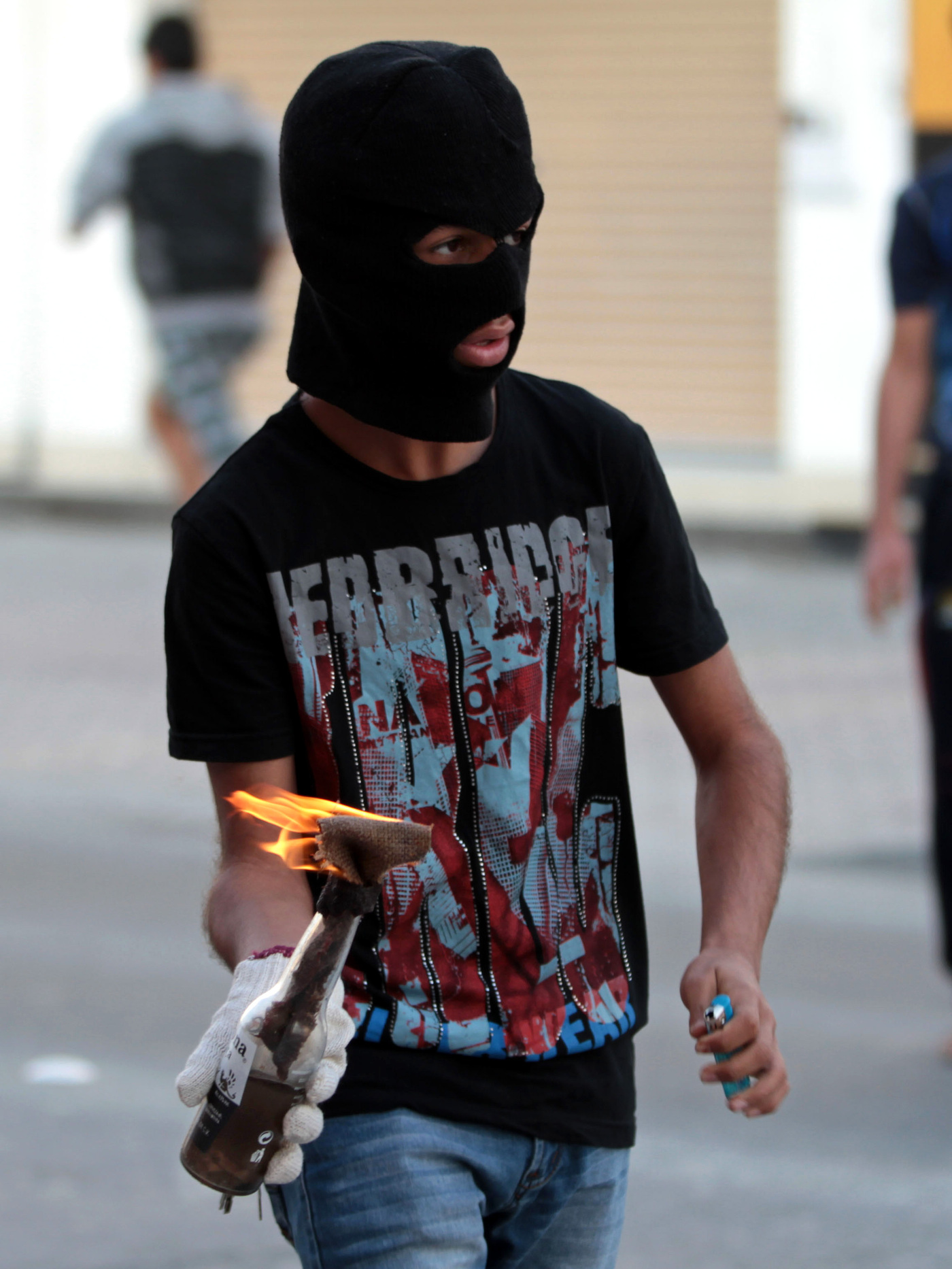 A Bahraini anti-government protester prepares to throw a Molotov cocktail at riot police during clashes in Malkiya village, Bahrain, on Jan. 7.

"This regime has never been honest," said Ali, the activist. "It always lies. Maybe they are starting the dialogue to let the street cool down. They are also trying to show the U.N. and others outside that 'see, we are trying our best.' "

The traditional opposition felt compelled to participate in the dialogue or risk being outmaneuvered by the government.

Attitudes toward the dialogue are only one issue that divides opposition groups. Al Wefaq has consistently called for nonviolent resistance. While agreeing with nonviolence as a general tactic, Feb. 14 activists have sometimes hurled Molotov cocktails at police.

"If one of the young people uses Molotovs to defend himself, is that violence?" Ali asked. "He's defending himself."

The authorities condemned the use of Molotovs, and other opposition groups criticized the young militants as well.

Union leader Radhi noted that using violent tactics "has become kind of a culture. They become angry and feel they can't do anything. Those using Molotovs cannot express themselves in other ways."

The use of Molotovs has decreased in recent months, however, Radhi said, in part because of its unpopularity as a tactic and in part because the government cracked down on sales of gasoline in cans.

The opposition movement also disagrees on how to react to U.S. policy toward Bahrain. Successive U.S. administrations supported Al Khalifa's autocratic rule because it provided stability in a volatile region. The U.S. Navy's Fifth Fleet has its headquarters in Bahrain.

Opposition leaders say the U.S. sold the Bahrain military both tear gas and Humvees, which were used to suppress demonstrations.

Al Wefaq's Salman criticized what he called lack of sufficient U.S. pressure, but he said the opposition would maintain close ties with Washington if it came to power.

"I appreciate what U.S. is doing," he said. "They need to do more. They need to support democracy in Bahrain."

The Feb. 14 Coalition is far more critical of U.S. policy.

"The U.S. has so many interests in the oil and money of Bahrain," said activist Ali. "That's why they are still on the side of the regime."

He said the U.S. could alienate a whole generation of young Bahrainis if it continues to support the monarchy. He urged the U.S. to apply political pressure and economic sanctions, as it has done in Syria.

Despite the internal differences, all of the opposition groups agree on the need to oppose government repression and seek significant change in government policy.

If the government-opposition dialogue produces results, the traditional opposition will likely gain strength. But if the government fails to make significant reforms, Ali predicts, young militants will take to the streets in larger numbers.

Freelance journalist Reese Erlich's reports from Bahrain are part of a GlobalPost Special Report on the role of the Sunni/Shiite rift in Middle Eastern geopolitics, in partnership with NPR.