Accessibility links
After Sandy, Not All Sand Dunes Are Created Equal In New Jersey, thousands of discarded Christmas trees have dodged the wood chipper and hit the beach instead. They're being used to jump-start new dunes, but scientists warn that these man-made dunes could be less sturdy than dunes that form naturally.

How To Make A Dune: Two Recipes

When Superstorm Sandy hit Island Beach State Park — one of the last remnants of New Jersey's barrier island ecosystem — it flattened the dunes, pushing all that sand hundreds of feet inland.

Three months later, the park was still officially closed, but the beach swarmed with volunteers. Members of the local Beach Buggy Association, volunteers from inland New Jersey, and a chilly but enthusiastic group of high school students dragged hundreds of old Christmas trees across the sand and laid them in a snaking line along the beach. 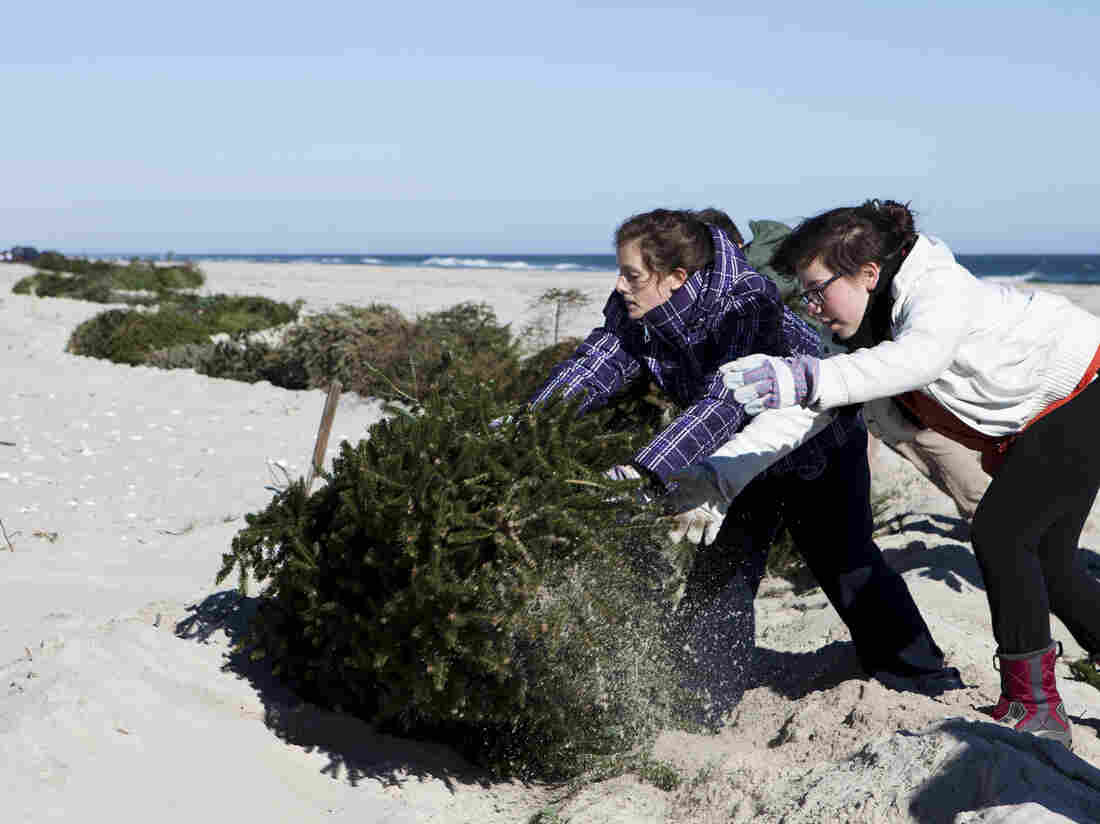 Alexandra Jones-Twaddell and Malley Chertkov add a Christmas tree to the growing line in Island Beach State Park. The two high-schoolers joined fellow students from the Peddie School to help rebuild dunes that had been flattened by Superstorm Sandy. Adam Cole/NPR hide caption 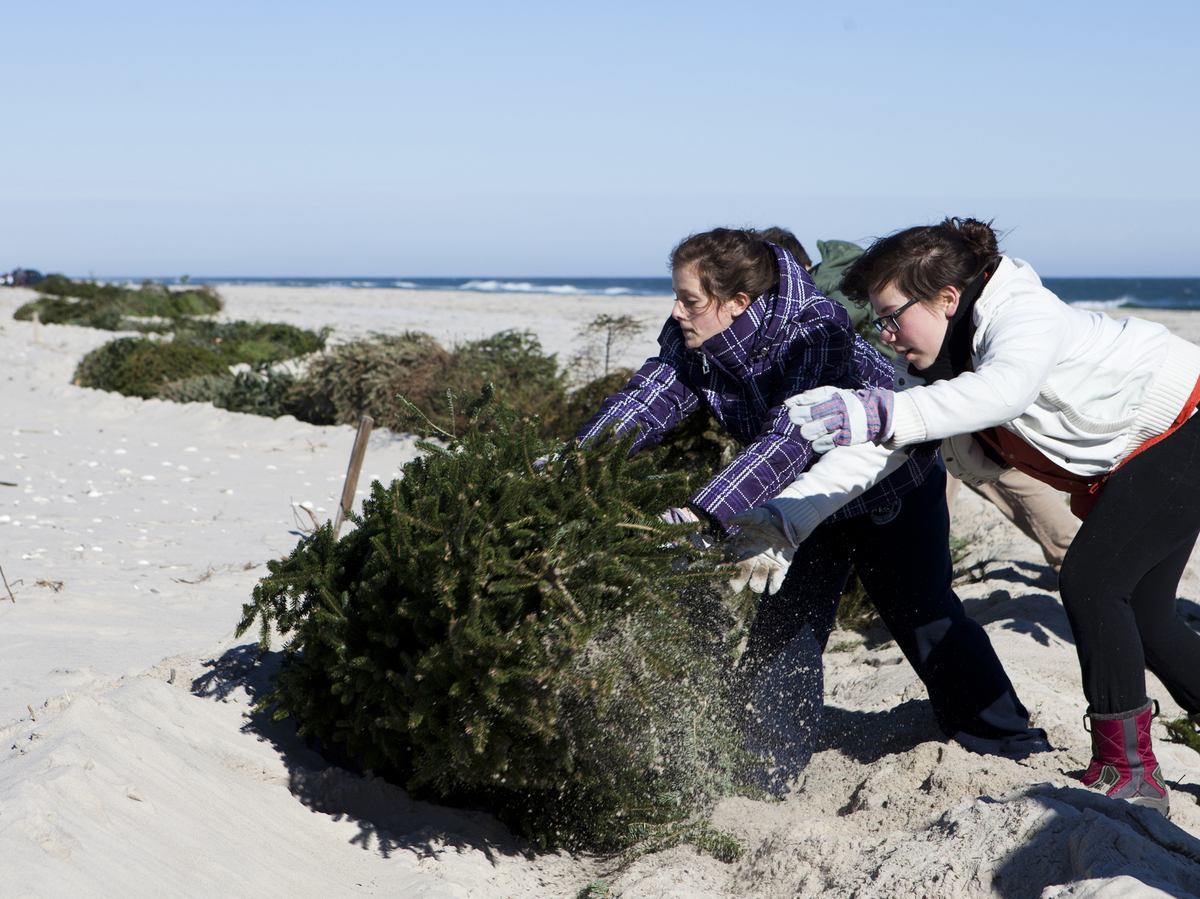 Alexandra Jones-Twaddell and Malley Chertkov add a Christmas tree to the growing line in Island Beach State Park. The two high-schoolers joined fellow students from the Peddie School to help rebuild dunes that had been flattened by Superstorm Sandy.

It seems like a bizarre strategy, but it's an effective one. The trees' needles and branches will trap windborne sand and serve as a foundation for new dunes.

Katie Barnett, a specialist with the New Jersey Department of Environmental Protection, was the project's mastermind. After Sandy, she put out a call for Christmas trees on the park service's Facebook page. The trees came pouring in from all over the state.

The community is eager to get the dunes back. During the storm, people saw how valuable dunes can be.

In Sandy's Wake, A Reshaped Coastline

But not all dunes are created equal. There are man-made dunes, and there are natural dunes. Norbert Psuty, a retired professor from Rutgers University, knows the difference better than most. He's studied dunes along the coast of New York.

But Psuty says replacing these dunes with man-made ones is tricky. Piles of sand — even those anchored by Christmas trees — will erode much faster than natural dunes.

That's why the dune builders at Island Beach State Park plan to plant beach grass on top of their new dunes come spring. The vegetation will add stability.

Mimicking nature's ingredients is important, but Psuty says there are still more important things to worry about.

"The real problem is the whole beach dune system is naturally migrating inland," Psuty says. "The beach is now where the houses were formerly."

A combination of sea level rise and erosion means that dunes want to form farther inland, pushing into coastal towns. If you try to push the dunes back toward the water, back where they once were, Psuty says they won't survive long. They'll erode away.

The alternative is to let dunes re-form naturally. Psuty has observed the process in the Fire Island Wilderness, where policy forbids the construction of man-made dunes.

First, beach grass catches sand thrown up by the wind. A hill of sand begins to form, anchored by an organic mesh of roots and rhizomes. 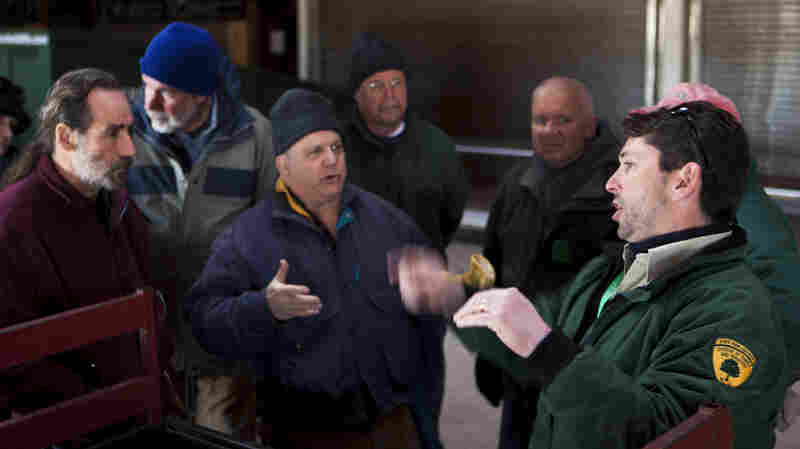 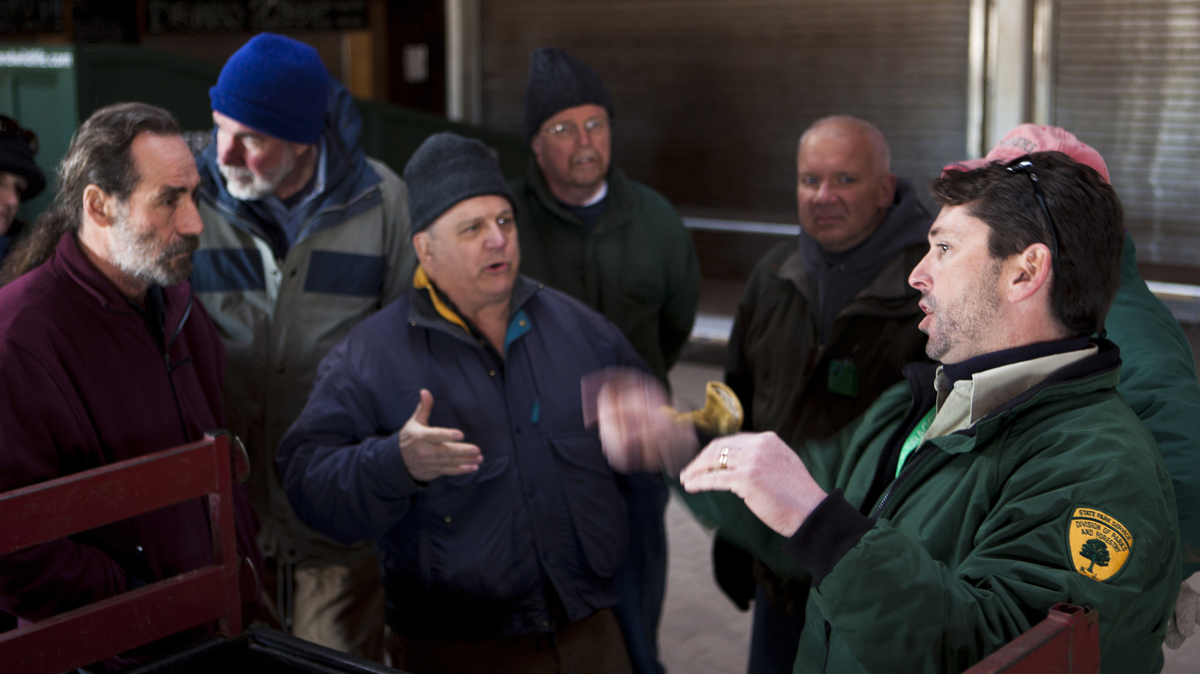 Because these plants can't survive too close to the salty waves, the dunes grow high up on the beach. An empty stretch of sand serves as a buffer between the dunes and the ocean and supplies the dunes with the sediment they need to grow.

Natural dunes are strong, but they take a long time to grow.

You might have to wait until 2023 for your dune system to fully recover from Sandy. Island Beach State Park Manager Ray Bukowski says they don't have that kind of time.

"We can't sit and hope a dune gets re-formed here," Bukowski says. "We've got to jump-start the dune and let it start doing its thing."

He says in the short term these Christmas-tree-seeded dunes are the best way to protect the inland habitat of Island Beach from storms.

"Our hope is that it works so well that this becomes an annual process," Bukowski says. "Next year after Christmas we can open up our lot and have folks drop [their trees] off."

Dunes may rise and fall, but there will always be Christmas trees in January.