Accessibility links
Conflict Transforms Syrian English Teacher Into War Photographer Nour Kelze, a 25-year-old resident of Aleppo, was a teacher. Then the war came to her city, and with it, a new career as a war photographer. She has been chronicling the violence from the front lines.

Syria's war has thrown ordinary citizens into situations they never could have imagined and changed them in ways they never would have dreamed. It's turned carpenters, engineers and doctors into armed rebels. And in Aleppo, it has turned a young female teacher into a war photographer.

We first met Nour Kelze back in October, on our first trip to Aleppo. We asked her to work with us as an interpreter. She agreed but said she also would be shooting pictures.

Kelze, 25, had been teaching English and only recently became a war photographer. 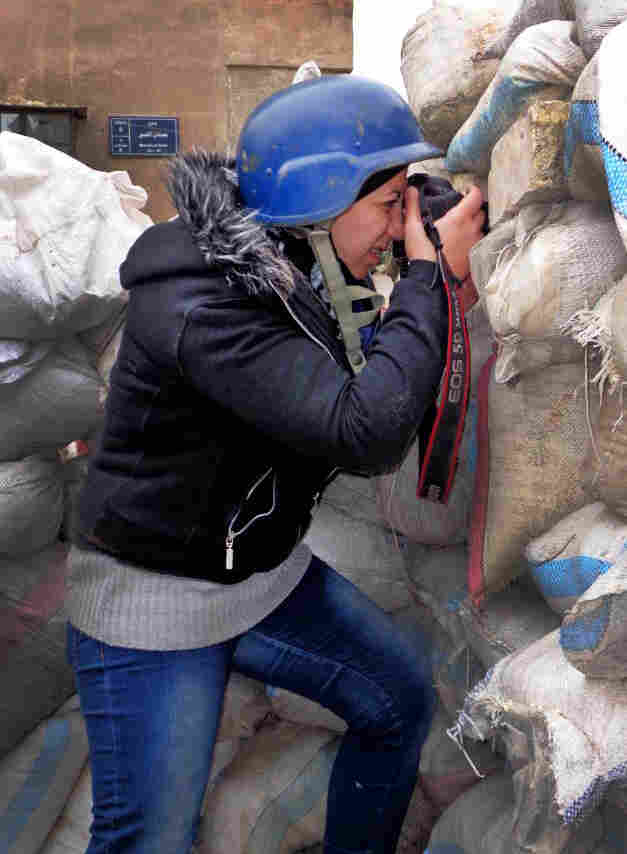 Nour Kelze, a 25-year-old from Aleppo, Syria, was teaching English at a private school when the uprising started two years ago. Since then, she has learned to be a war photographer and has been sending photos to the Reuters news agency. Stephanie Freid/Courtesy of Nour Kelze hide caption 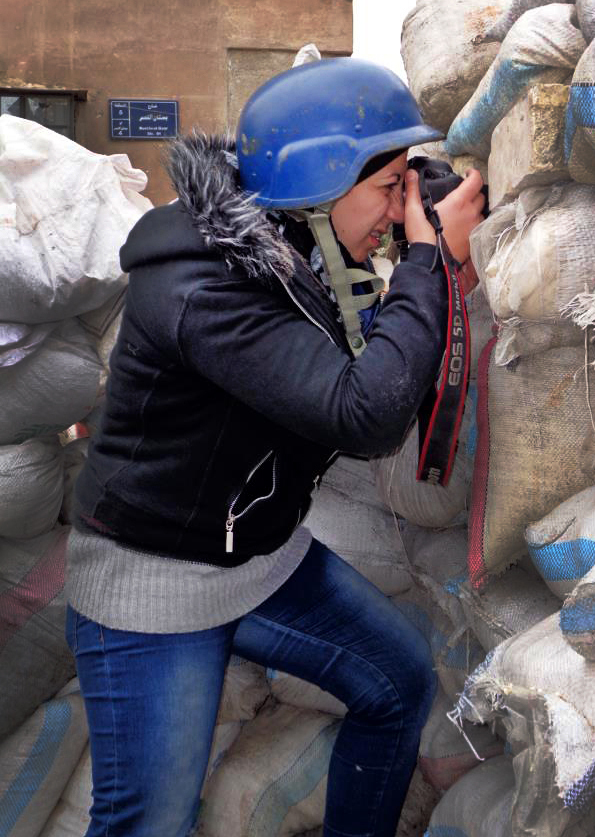 Nour Kelze, a 25-year-old from Aleppo, Syria, was teaching English at a private school when the uprising started two years ago. Since then, she has learned to be a war photographer and has been sending photos to the Reuters news agency.

She covers her hair with a hijab, or a stocking cap, or sometimes a helmet. She has sharp eyes and a sly smile. But probably the most striking thing about Kelze is how calm she is in the face of chaos.

As we got out of the car in a bombed-out neighborhood during that first trip, she led us around like we were on a tour. We started to hear shelling and gunfire, but Kelze was unfazed.

"We're not even close to the front line yet," she said.

We started asking questions about a guy who was killed the day before. Turns out, Kelze knew him. He had been part of a team of rebel fighters, known as the Free Syrian Army, which helped pull the body of an old man out of some rubble. A government sniper had shot the man in the chest and killed him.

Kelze says the rebel fighter provided cover by shooting at the government sniper. "At the same moment, two rebels ran into the street, dragged the body, and that's it."

Kelze photographed the whole thing — the body of the old man being dragged out, and the rebel who was shooting to provide cover. Now the rebel shooter is dead.

As we walked through the rubble of the ruined streets, she remembered him — her voice showing no emotion.

"He went to see his family last Saturday ... and then he came back here the next day, and he died," she said.

It's this kind of experience that gives Kelze credibility with the rebels in Aleppo. It means they give her access, and good access means good pictures.

When the Syrian uprising started nearly two years ago, Kelze was a recent college graduate teaching English in a private school.

Protests kicked off around the country, but not the northern city of Aleppo, Kelze's hometown.

That's because the business-minded city was more concerned with survival than politics. Kelze says she'd go to protests that lasted only five minutes.

Then some in the protest movement took up arms, and last summer those rebel fighters brought the fight to Aleppo. At first, Kelze did what she calls "woman things" — cooking for the rebels. 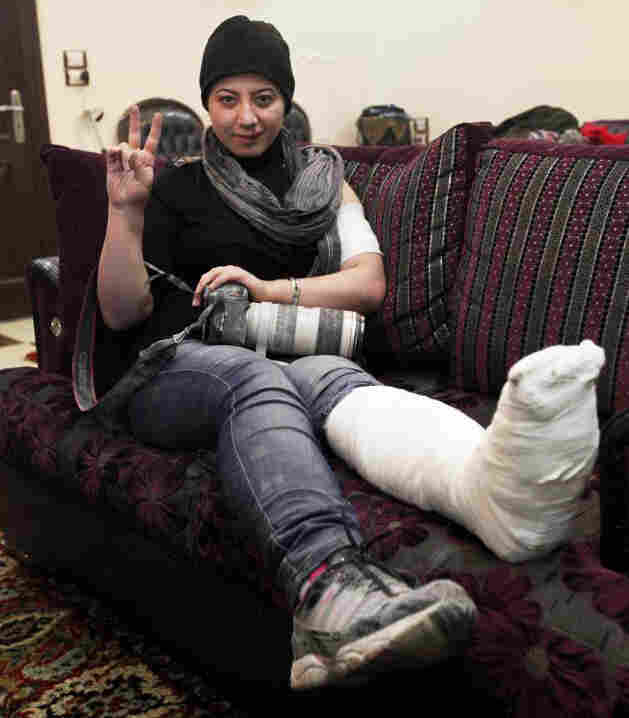 Kelze recently suffered a broken ankle when a wall collapsed on her during a firefight. She is recovering in Turkey, but plans to return to the front lines after she heals. Courtesy of Noor Kelze hide caption 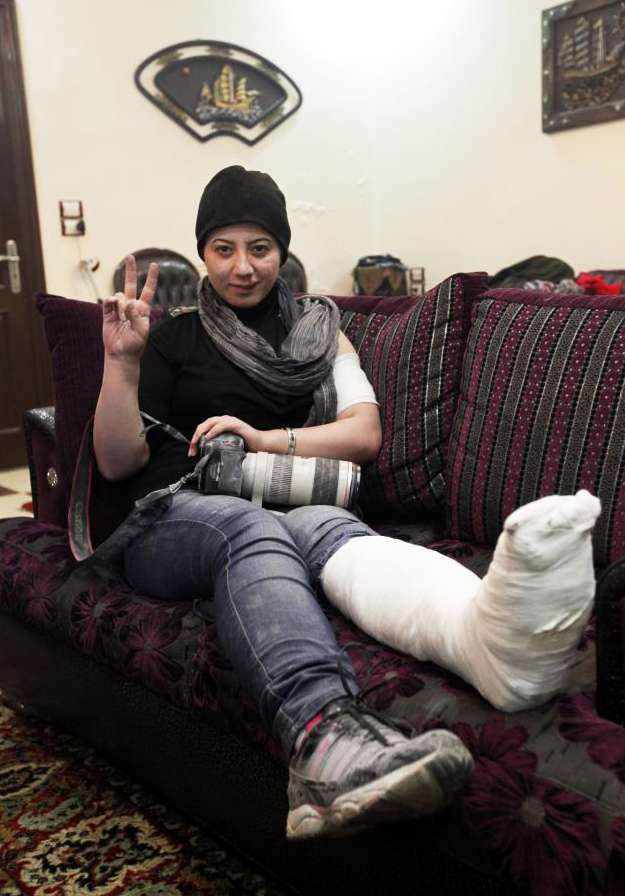 Kelze recently suffered a broken ankle when a wall collapsed on her during a firefight. She is recovering in Turkey, but plans to return to the front lines after she heals.

Then she offered to record one rebel unit's battles and upload the footage to the Internet. She says it was her way to help the cause.

"The camera is as equal as a weapon," she says. "And you need to document every single thing that's happening. Because back in the '80s, when we were in similar situation, nobody had any idea about what was going on in Homs and Hama," she says, referring to a brutal crackdown by then-President Hafez Assad, father of Syrian's current President Bashar Assad. Tens of thousands of people were killed then.

Last fall, a well-known war photographer with the Reuters agency, Goran Tomasevic, spotted Kelze or shooting pictures with her cellphone. He trained her for a week on how to use a professional camera, then gave her a few of his cameras to keep. She's been sending pictures to the agency ever since.

It's not an easy job. One day Kelze was shooting pictures of the aftermath of a bombing by a government plane. The jet circled back around and came in low. Rebels fired at it with two doshkas, a Russian name for large-caliber machine guns.

"I felt so safe because usually ... when the doshka starts firing at the jet, the jet would go up high and not come back again," she says.

But that's not what happened this time. As rebels fired the doshkas, Kelze couldn't hear that the jet was coming even closer. She pulled her face away from the camera to see that everyone else had hit the dirt.

Kelze pulled her cameras in tight, turned her back on the plane and ran to hide behind some sandbags. As she did, she took shrapnel across her leg and back.

"I thought I was waiting for death," she says. "Because all I was thinking about is that the jet is going to throw its big bomb now, and we're going to die in pieces."

That didn't happen. For whatever reason, the jet flew away. In the end, Kelze's injuries were relatively minor.

Working Despite The Risks

In conservative parts of Aleppo, it's very strange for a young, unmarried woman to be running around with a bunch of guys, let alone guys with guns.

But Kelze says she doesn't care if people gossip. She says her family supports her, and that's all that matters.

On the day Kelze took us to the front line, rebel fighters stormed her family's neighborhood, where her mother and three siblings still lived. Government troops responded.

As we drove around, Kelze frantically tried to call her mom to see if she was all right. She asked us if we could give the family a ride out of the city.

It was sundown by the time we finally found them.

They had made their escape from the neighborhood and were standing on the street with what looked like everything they owned.

Kelze's mother smiled and chatted as if nothing was wrong. An older aunt didn't do so well. Inside the car she rocked back and forth, grabbing my knee and repeating prayers of thanks.

Some news organizations have stopped taking work from freelancers in Syria. They say doing so only encourages young, inexperienced and uninsured reporters to risk their lives.

But even if she weren't sending pictures to Reuters, Kelze says she would do this work anyway.

When we last saw her, Kelze said she was planning on setting up a kind of media center that would help her and other Syrians connect with foreign journalists.

But then, something happened.

A government tank fired and hit a wall. The wall collapsed on Kelze. She came to amid a cloud of dust. The bones around her ankle were broken. She is now being treated in a hospital in Turkey.

Kelze told us the attack has only strengthened her resolve. Once the leg heals, she says, she hopes to be back at the front lines.