Accessibility links
'One Billion Rising' Campaigns To End Violence Against Women Women from around the globe held rallies on Valentine's Day to take up the cause of ending sexual violence. A demonstration in New Delhi is particularly poignant following the fatal gang-rape of a 23-year-old student. 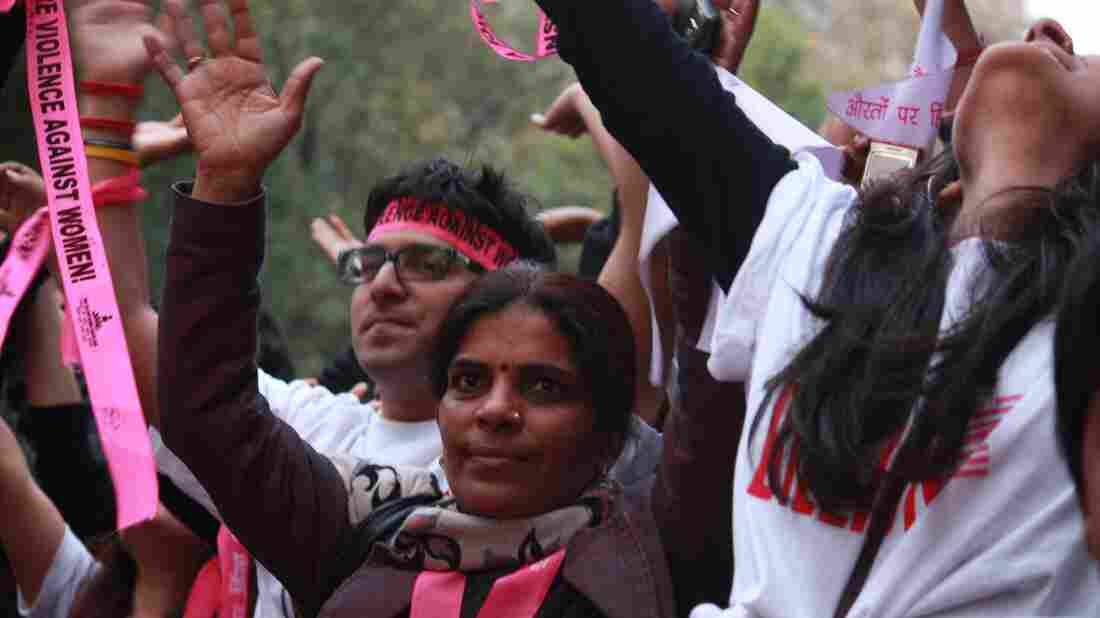 In rallies around the globe, demonstrators on Valentine's Day called for an end to violence against women. A large, animated crowed gathered in New Delhi for the One Billion Rising rally. Anoo Bhuyan/NPR hide caption 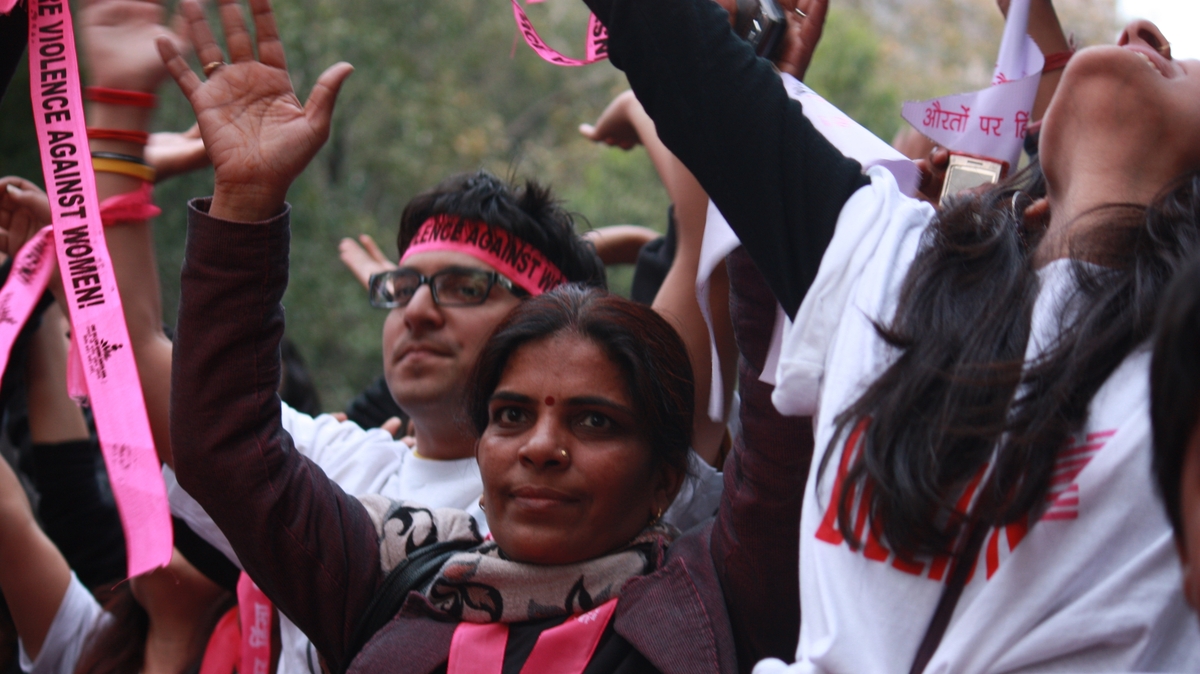 In rallies around the globe, demonstrators on Valentine's Day called for an end to violence against women. A large, animated crowed gathered in New Delhi for the One Billion Rising rally.

Valentine's Day saw women from around the globe take up the cause of ending sexual violence. From London to Los Angeles to Johannesburg, street exhibitions, dance performances and musical rallies were all held under the slogan "One Billion Rising."

In New Delhi, revulsion over the fatal gang rape of a 23-year-old student gave added significance to the international campaign.

The dancers and drummers that reverberated from Parliament Street in central New Delhi on Thursday night were meant to highlight a sobering United Nations assessment: that 1 in 3 women in the world, or roughly 1 billion, suffers some sort of violence at the hands of men in the course of her lifetime.

Urging people to join the One Billion Rising campaign, Indian musician Anoushka Shankar, daughter of the late sitar virtuoso Ravi Shankar, revealed in a video this week that she had been the victim of sexual violence.

"As a child I suffered sexual and emotional abuse for several years at the hands of a man my parents trusted implicitly," she said. "Growing up like most women I know I suffered various forms of groping, touching and verbal abuse ... that I didn't know how to deal with. ... And as a woman I find that I'm frequently living in fear, afraid to walk alone at night ... and you know, enough is enough ... so join me. Let's rise together."

Eve Ensler, author of The Vagina Monologues, is the founder of One Billion Rising. She credits widespread coverage of both the gang rape in Delhi and the Taliban shooting of the young girl in Pakistan for spurring this global outpouring to end violence against women.

An Interview With Eve Ensler

A Valentine's Campaign To End Violence

A Valentine's Campaign To End Violence

Thousands danced in the Democratic Republic of Congo and in the Philippines. San Francisco saw flash mobs that drew people with eye-catching outbursts of dance and theatrics.

In Delhi, the campaign's Southeast Asia coordinator Kamla Bhasin called it a fight against "hatred" and "patriarchy" that deliberately coincided with Feb. 14.

"On this St. Valentine's Day, we are saying we don't want violence. We want love. What kind of love? Just love. Loved based on justice, love based on equality, love based on mutual respect," she said.

Bhasin added that "patriarchy had united with capitalism" to produce the lucrative industries of pornography, cosmetics and Barbie dolls.

But makeup and expensive toys do not count in the life of Hukum Bai, who barely ekes out of living as a street vendor. She joins her sister vendors in song and says that she's tired of enduring harassment from police who chase her off the pavement.

"When we tell them we need to feed our children, the authorities say to us, 'Why didn't you ask us for permission before you had those children?' " Bai said. "I am here to defend my right to earn a livelihood in a secure manner on the street."

Kamal Arora of Vancouver, a Ph.D. student of anthropology, attended the Delhi event. She called patriarchy and the mistreatment of women a "transnational issue" and not the purview of the developing world as it is often portrayed.

"There might be more overt forms of sexual harassment here but it does occur at home [in the developed world] in a variety of different ways," she said. "For example in the U.S., I just read that women make 77 cents to a man's dollar across the board."