Accessibility links
Activists Offer Protest Tour Of Spain's Modern Ruins A new form of alternative tourism is cropping up across Europe, with people eager to see the shattered remains of the continent's boom-and-bust economy. In Valencia, Spain, those tours take tourists past the city's many deserted construction projects. 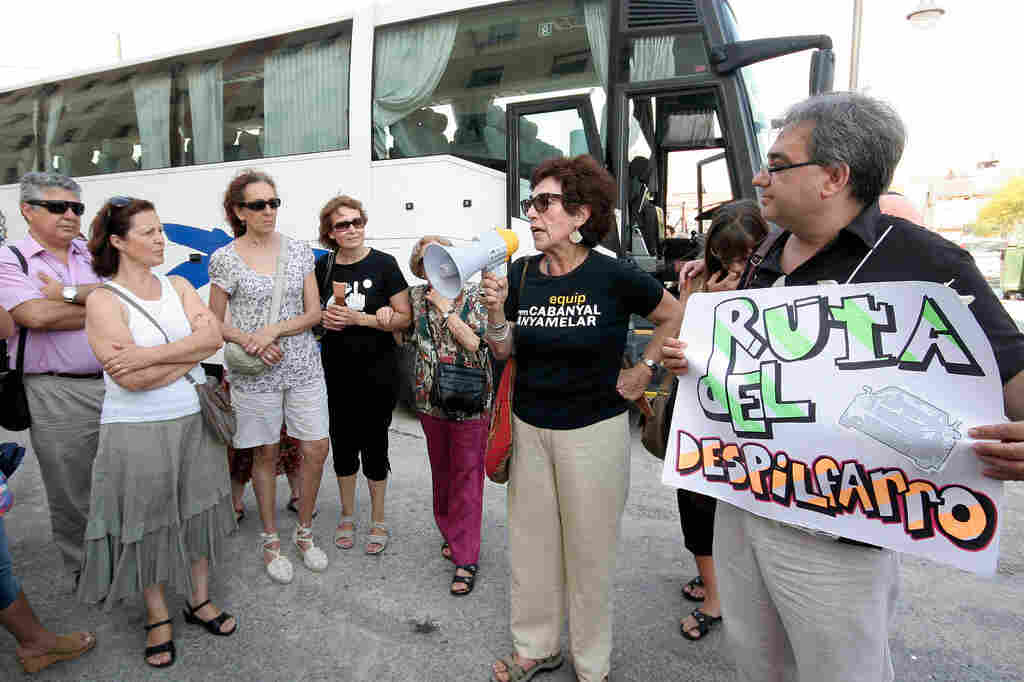 Every Saturday, he charters a bus to take people past government buildings where bribery is rumored to take place, and then to elementary schools where kids go to class in trailers. He wants to show foreign investors where their money has gone.

"Here we are, in [the] face of the Valencian parliament," he says. "We start all our tours, our waste tours, protesting against the political corruption and waste."

The tours represent a new form of alternative tourism cropping up across Europe, with people eager to see the shattered remains of the continent's boom-and-bust economy. 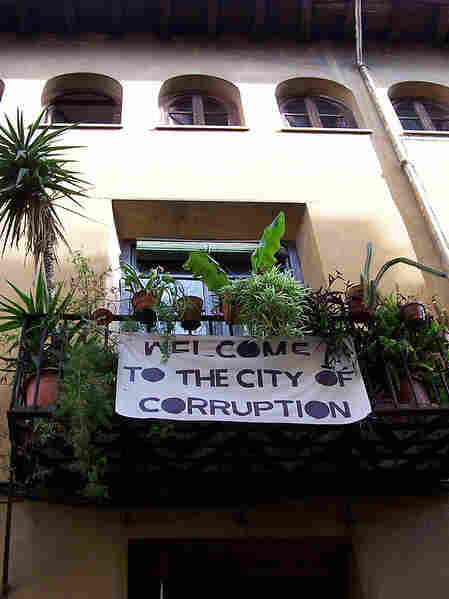 A protest banner in Valencia, Spain, reflects the view that the city's economic woes are a result of political corruption. Courtesy of Ruta Despilfarro Valencia hide caption 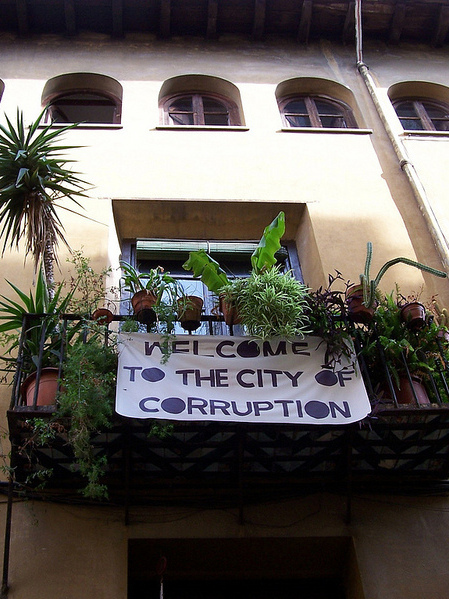 A protest banner in Valencia, Spain, reflects the view that the city's economic woes are a result of political corruption.

"There [are] a lot of people in European countries, especially England and Germany [who] put a lot of money into our economy," says Gil. "They are interested to know where ... is the money. And we go to show you where there isn't the money — at the public schools, at the hospitals."

The bus tour cruises past Valencia's unfinished construction projects, such as a half-built soccer stadium. The city has witnessed an extreme reversal of fortune, with posh but empty buildings standing as sad sentinels at the mouth of Valencia's Mediterranean port, which once hosted the America's Cup sailing race.

These are Spain's "white elephants," public infrastructure projects that gobbled up billions in taxpayer money and whose upkeep is now bankrupting the economy.

Most prominent among them, in Valencia, is the City of Arts and Sciences, a massive museum complex, which cost more than $1.5 billion to construct.

How A Spanish City Went Boom, Then Bust

Gil describes the City of Arts and Sciences' unique addition to the city's skyline, saying it's "the mother of Valencia." Yet he says the euros that were used to build it were "wasted."

"We have a very strong debt," he says.

To Scrape By, The Poor In Spain Go Dumpster Diving

Gil and his business partner, Teresa Galindo, are former journalists who felt like their newspaper reports about wastefulness were falling on deaf ears.

So they tossed out their press badges and became activists instead.

"Every day they surprise us with another case of corruption or politicians losing money. It makes us mad as citizens," Galindo says. "As time went by, we decided we had to do something. So we started designing our routes."

The Valencian tour, called Ruta del Despilfarro, or "route of wastefulness," is one of many popping up across Europe.

In the U.K., Liam Taylor, a high school civics teacher who moonlights as a tour guide with Occupy London, shows tourists around the British capital's financial district.

"From my school playground, you can see these enormous glass towers in which bankers trade billions of pounds every day," Taylor says. "And yet my school might as well be in a different universe because the area of London in which the school is has the highest rate of child poverty in the U.K. And so there's an enormous juxtaposition."

In the Czech capital, Prague, you can take a tour dubbed "the best of the worst," past luxury villas, a botched railway and an empty field where a sports stadium was paid for but never built.

Taylor says he's thrilled to learn that he's part of this accidental network.

"It's interesting because we came up with the idea of this tour completely independently, and then obviously people in Spain have done the same thing, presumably without hearing of us," Taylor says.

"I think what people are craving is a deeper understanding of what has happened in the last few years. Because many people don't understand it very well, and yet it's having enormous consequences in all of our lives."

A ticket for Valencia's "wastefulness tour" costs about $10. Tours have been booked solid since they began last spring, with about 50 tourists signing up every week.