Accessibility links
The 'Baby Dolls' Of Mardi Gras: A Fun Tradition With A Serious Side The baby dolls were born from racial segregation in New Orleans in 1912. A group of African-American prostitutes decided to express themselves through dance and costumes, challenging taboo by parading during Mardi Gras. 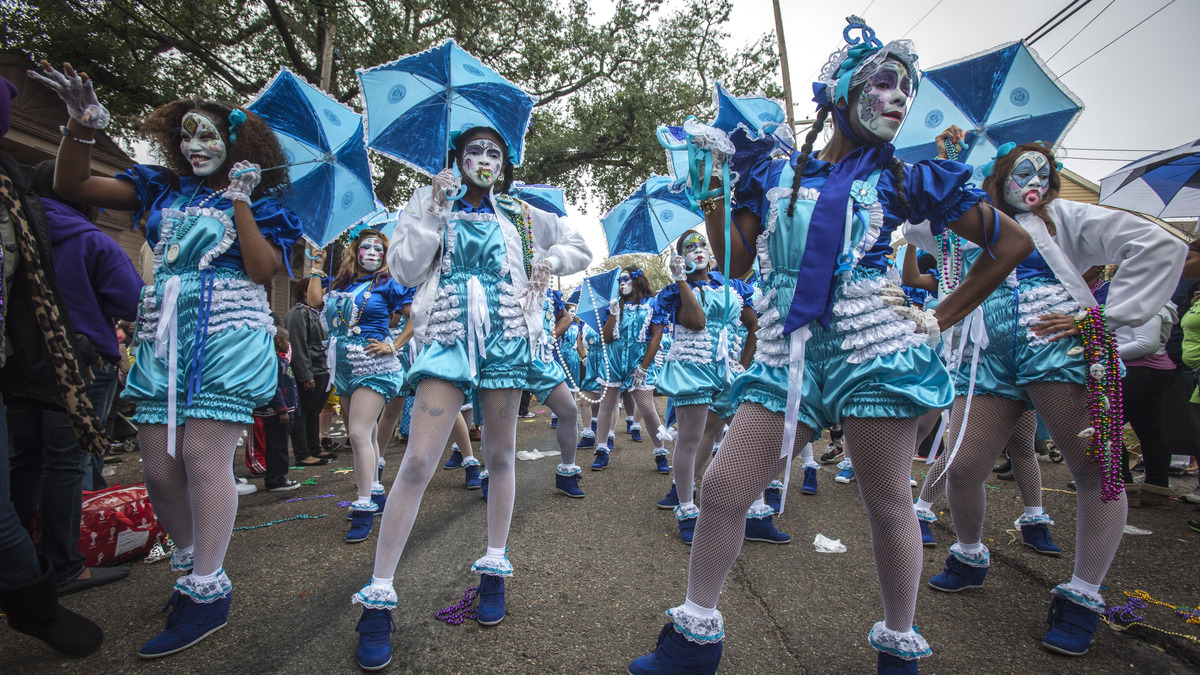 The Baby Doll Ladies pose during Mardi Gras in New Orleans on Tuesday.

Just inside a room on the second floor of the Louisiana State Museum's Presbytere, there's a large baby doll dress, big enough for a woman to wear. And one did.

The costume and the baby bottle next to it belonged to 85-year-old Miriam Batiste Reed, who was known as a baby doll and one of the first women to parade in Mardi Gras. The bottle and the dress are part of a new exhibition, They Call Me Baby Doll: A Mardi Gras Tradition.

"The baby dolls are a group of African-American men and women carnival maskers," says Kim Vaz, dean at Xavier University. "They would dress up on Mardi Gras day in short satin skirts, with bloomers, and they would have garters."

Vaz, who has written a new book about the baby dolls, says the tradition dates back to 1912, when Jim Crow was the law of the land in the South. It all started in New Orleans' red-light district, which itself was divided along racial lines. The Storyville area, where the sex industry was legal, was for white customers; black customers had to go a few blocks away where prostitution was illegal, but allowed. 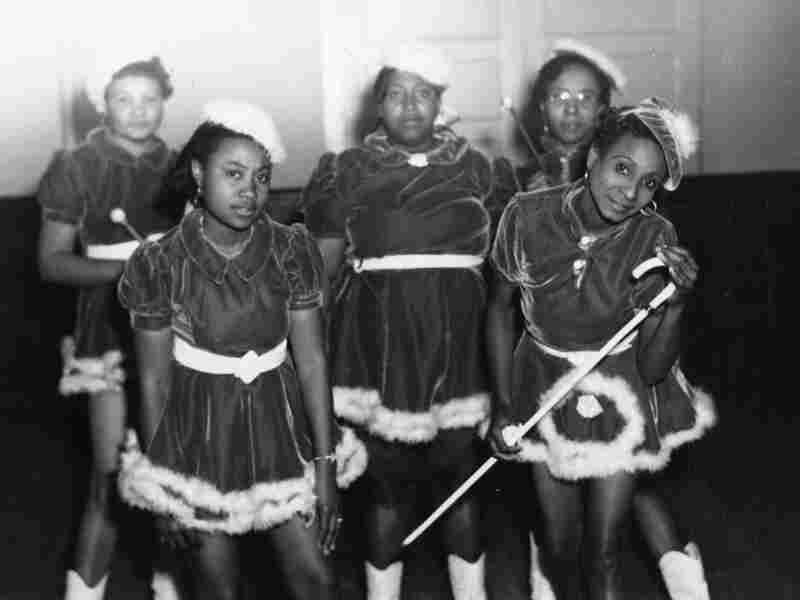 This 1942 photo provided by the Louisiana State Museum shows Gold Digger Baby Dolls, one of the neighborhood groups that adopted the "baby doll" costumes. State Library of Louisiana/AP hide caption

"[It was] another manifestation of how Jim Crow worked to disenfranchise black people, even in the most sordid of industries," Vaz says.

Between these two red-light districts, there was a kind of rivalry. One year the women in the black district heard that their counterparts in Storyville were going to dress up for Mardi Gras; they decided they needed to come up with some good costumes to compete.

"And they said, 'Let's just be baby dolls because that's what the men call us. They call us baby dolls, and let's be red hot,' " Vaz says.

Calling a woman "baby" had just made its way into the popular lexicon, with songs like "Pretty Baby" written by New Orleans native Tony Jackson. There was, however, something subversive about black sex workers dressing this way.

"At that time, baby dolls were very rare and very hard to get," Vaz says. "So it had all that double meaning in it because African-American women weren't considered precious and doll-like."

Just the fact that these prostitutes were masking and going out into the street at all was a big deal. Women just did not do that then. And as sex workers, these women were already taboo. Vaz says they just kept piling on by appropriating males behaviors like smoking cigars and flinging money at the men.

"If you went to touch their garter, they would hurt you," she says.

The baby dolls carried walking sticks they would use in their dances, as well as to defend themselves. It was about fun, Vaz says, but it was a kind of laughter to keep from crying.

"At that time ... residential segregation was practiced, job discrimination was practiced [and] women didn't have the right to vote," she says. "The one way that they could make a statement was through their dance and their dress and their song. It's when you've exhausted all your legal remedies that you have to use the culture to make a statement and express yourself."

They came up with their own dance step they called "walking raddy." Pretty soon, women in more "respectable" neighborhoods started masking baby doll. But desegregation in the 1950s allowed black New Orleanians to do more on Mardi Gras.

Then Interstate Highway 10 was built directly through the neighborhood where African-Americans gathered to celebrate carnival, disrupting many traditions. The baby dolls faded, until several years ago.

'The Street Parade Of Life:' Mardi Gras Rolls On Despite Rain Threat

On Mardi Gras day this week, one of the highlights of the Zulu Parade was the Baby Doll Ladies. Dressed in royal blue rompers with ruffles and bows, they danced down the street to a New Orleans' style of hip hop called bounce.

The Baby Doll Ladies are the project of Millisia White, who co-curated the new exhibition with Vaz. White is a native New Orleanian and a choreographer, who had just started her own dance company in 2005 when Hurricane Katrina hit. After the storm, she wanted to do something involving dance that celebrated New Orleans culture.

"We weren't necessarily trying to resurrect the times of 1912 in how we dress or how we look or how we present," White says. "If anything is resurrected, it doesn't exactly come back the same because we're not a replica, we're a continuation of the baby doll practice."

White interviewed elders around New Orleans to learn about the tradition. She and her brother, who's a DJ, put together a look and a sound for the new baby dolls, and then they tested it out on Mardi Gras day 2009, four years after Katrina.

"When they saw us on the route ... I kept hearing like, 'Here come the new baby dolls. The baby dolls are back,' " she says. "I could see in people's eyes for the first time ... since Katrina, a glimpse of some kind of hope for a new New Orleans."

It seems history is not just in the past in New Orleans, it's dancing down the street right next to you, maybe wearing bloomers and a bonnet.

A previous Web version of this story incorrectly said Millisia White and her brother had tested a new look and sound for the baby dolls five years after Hurricane Katrina. It was actually four years afterward.