Accessibility links
High-Speed Rail Buzz Overpowers Daily Chug Of Freight Trains President Obama reiterated his goal of bringing America up to speed with new high-speed rail projects nationwide. Meanwhile, the freight-rail systems are still helping farmers keep costs down and getting their crops out. Any new kind of rail expansion would have to take these long-established networks into account. 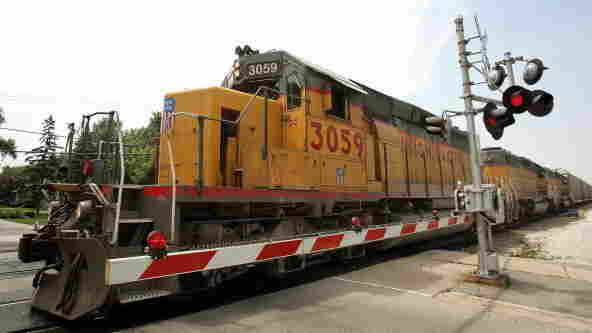 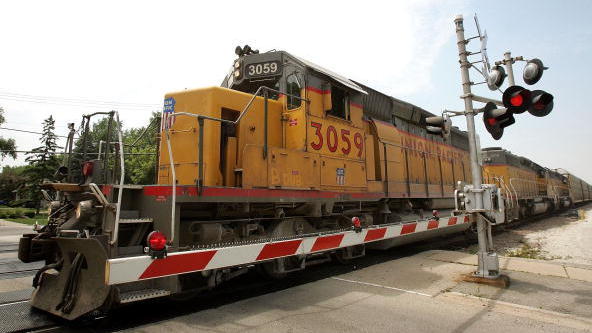 A Union Pacific freight train passes over a grade crossing in Elmhurst, Ill.

From the steam engine to visions of a national high-speed rail system, railroads have made their mark on American culture.

In his first term, President Obama promised to create a national system of high-speed rail, though he was scarcely the first politician to have done so. The January 2010 stimulus bill allocated $8 billion for high-speed rail projects, but Congress rejected federal funding for it.

In his State of the Union address on Tuesday, the president reiterated the goal of having passenger rail rise again.

But these new projects could conflict with the freight systems that go largely undetected for many Americans.

As it stands now, Amtrak pays private companies in the center of the country to run its low-speed passenger trains on freight-rail tracks. But high-speed trains would need their own tracks, depriving the freight-rail system of some of that revenue.

How to build a high-speed system without hurting the freight industry is a problem that has not yet been solved, says professor Christopher Barkan, director of the RailTEC center at the University of Illinois at Urbana-Champaign.

"The freight railroad network is a great asset to our economy and environment," he says, "and we need to be careful that expansion of passenger service does not harm the viability of that efficient freight-rail transit system we've developed."

Mark Sprague's Illinois farm covers about 3,000 acres near the Mississippi River. He grows mainly corn, soybeans and a bit of winter wheat, and he relies heavily on freight rail to get it around.

"For the past several years, I'd say close to 70 percent of my corn has actually left this area by rail," he says.

We have the world's best freight-rail system, but no one sees that. And when they do see it, they're waiting for a mile-long train to go by so they can get to their child's soccer game.

From Sprague's farm in Hull, his corn travels 130 miles by rail to the city of Decatur, in central Illinois. He says he feels like he's in a good spot: Freight rail carriers compete for his business, which helps keep it affordable.

"There's good competition between the rail lines. There's several major carriers, and here in the Midwest we're served by all of them essentially," he says.

Edward Hamberger is the president and CEO of the Association of American Railroads, a freight-rail industry group.

"We have 140,000 miles of track, an interconnected network that binds this country together," he says.

Hamberger says Sprague is just one of millions of customers served by American freight rail.

"Not everyone knows that the freight-rail system in America is privately owned. This year alone America's private freight companies will spend $24.5 billion — that's 40 cents of every revenue dollar — back into the infrastructure in terms of new locomotives, railroad ties, miles of track, signal systems, rail cars," he says.

Hamberger says freight rail is a geographic necessity in America.

"In the U.S., with 3,000 miles from coast to coast, we better have a pretty effective, efficient and cost-effective way of moving that freight just to get to ports so we can compete in world markets," he says.

Even though freight trains are heavier and slower than trucks, they're more fuel-efficient, and therefore more cost-effective. Plus, many American highways and bridges need infrastructure repair.

But most Americans don't see trains every day, like they do trucks. So Hamberger says their idea of the railroad is kind of out of date.

"Everybody says, 'My grandfather worked on the railroad,' and everybody says, 'My goodness, why don't we have a railroad system like Japan has?' We have the world's best freight-rail system, but no one sees that," he says. "And when they do see it, they're waiting for a mile-long train to go by so they can get to their child's soccer game."

In addition, political opponents of the president's vision say America is just too spread out, too large and diffusely populated for high-speed economics to work.

"The population densities in countries where it has worked are different than in the U.S.," says RailTEC's Barkan. "Well, that's definitely true out in the West, where you have vast swathes of land with very little population."

It's a different story in large metropolitan centers in the Midwest, though, Barkan says.

"If you actually look at the demographics and the distribution of the people and geography, it's not that dissimilar from, say, France," he says, "which is another country that has a very successful high-speed passenger rail system and continues to expand their system."