Accessibility links
Haitian Musicians Get By With A Little Help From Their Friends It's been three years since the earthquake that wracked Haiti. In that time, the Caribbean nation has been hit by two hurricanes that have killed dozens more. Some of the country's musicians have been inspired by those crises to create new music — with the help of two U.S. producers. 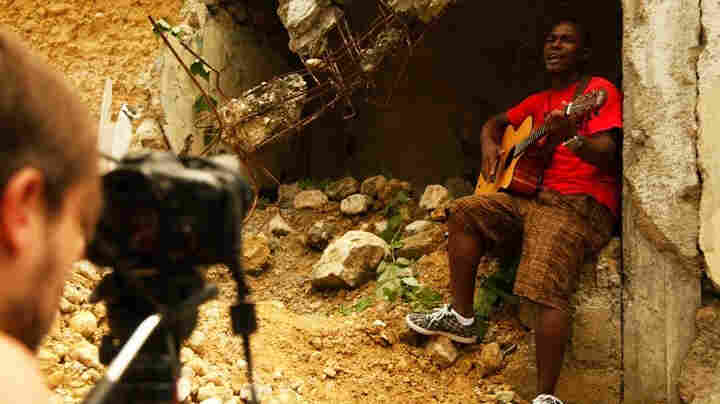 Singer-songwriter Amos Dolce on the set of the video for his song "Haiti, Haiti," which Konbit Mizik produced. Courtesy of the artist hide caption 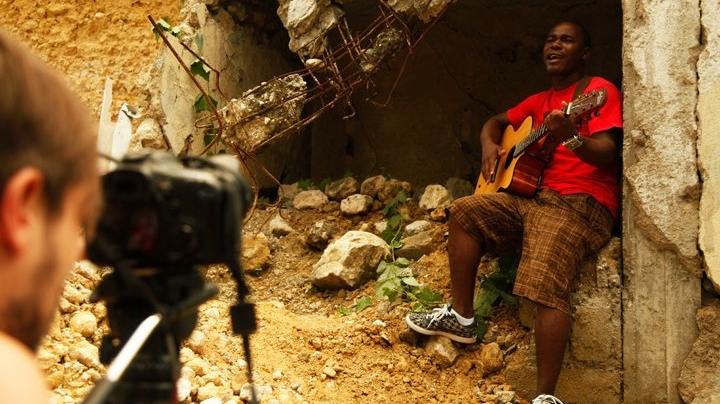 Singer-songwriter Amos Dolce on the set of the video for his song "Haiti, Haiti," which Konbit Mizik produced.

A rapper who goes by the name Bricks stands in an empty lot on ceramic tiles that used to be his bedroom floor. In 2010, the earthquake that destroyed much of Port-au-Prince also wrecked his house and recording studio. Bricks was home when the quake struck, and says that in that moment, music literally saved his life.

"The head of the bed and a pile of CDs kept the roof from flattening me," Bricks explains in Creole. "The CDs that we just made, and the headboard, actually held up the roof so it didn't fall on me."

Bricks, whose real name is Sermevil Edner, was part of the popular rap group Barikad Crew, and still performs with another called Majik Click. He says that for many years, Haitian musicians criticized politicians for corruption and inaction. Now, however, their lyrics often focus on natural disasters.

Elsewhere in Port-au-Prince, outside a small makeshift studio at a space rented from an elementary school, Ian Evans waits for some young rappers to stop recording. The western Massachusetts native is a musician and record producer who co-founded the nonprofit Konbit (pronounced "cone-beet") Mizik, which roughly translates as Co-op Music.

"The artists can come and record music, collaborate, get the reality of their lives onto recording," Evans says. "It's a place where they can play music and get the stress out."

Evans was doing aid work in Port-au-Prince until earlier this year. But he kept meeting talented young rappers and musicians with no outlet for work, since most of the city's recording studios had been destroyed by the earthquake. So he and New York videographer Nick Cannel formed Konbit Mizik as a way to get the music recorded and distributed online through iTunes and similar networks.

"Haitians have used music in the recovery from the earthquake in the same way that music has been used here forever," Evans says. "Music allows the artists to look around themselves, take all the negative and turn the negative into a positive."

Evans and Cannel pay all expenses out of pocket and through benefit concerts; they've applied for nonprofit status in order to get foundation funding. Evans says the recordings have earned some money for the musicians, who keep all the royalties.

One of them is singer and songwriter Amos Dolce. Konbit Mizik recorded his song "Haiti, Haiti," and made a video, which played on local TV. Dolce says that as a result, he started getting steady work at a restaurant that survived the earthquake.

"I used to play here before and they stopped calling me," Dolce says. "After they saw the video, they said, 'Oh, he's at a new level. Let's call him back again.'"

Dolce says the 2010 earthquake, and this year's Hurricane Issac, inspired him to write " Haiti, Haiti." He doesn't want Haitians to be seen only as victims.

"Before the quake, things were not so great in Haiti," he says. "After, it was like a big blow to someone already down. Those lyrics were for people to pick themselves up, and for their love of Haiti."

Haiti's musicians face the same problems as everyone else on the island: sporadic electricity and running water, lack of housing and poverty-level incomes. Dolce says Haiti has suffered a lot in the past several years.

Dolce and his fellow musicians firmly believe that Haiti's long tradition of music can help their country's recovery — with a little help from their friends.